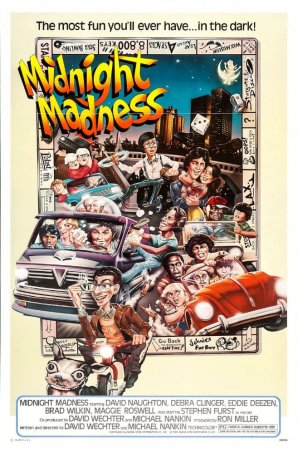 If you’re in the mood for an overdose of (early) ‘80s nostalgia, Midnight Madness has your fix. Watching the film, which was made in 1980, offers a reflection of the kind of escapism that dominated the teen-oriented cinema of the era. Today, it feels like a parody and at times slips into “so bad it’s enjoyable” territory. That quality allows Midnight Madness to be a less tiresome experience than it might otherwise be but the overlong running time (it clocks in at 112 minutes – at least 20 minutes too long) and consistently unfunny comedy make it less of a guilty pleasure than one might expect.

The core premise offers some promise. Five teams, each representing a different college clique stereotype, compete to see who can solve the most clues and reach the finish line first in an all-night scavenger hunt-inspired race. (One wonders whether the makers of the TV series “The Amazing Race” had Midnight Madness in mind when they developed their show – it’s essentially the same thing on a larger scale.) The Yellow team, led by Adam Larson (David Naughton), are the “average” guys – the five people we’re supposed to identify with. The Blue team, with loud-mouthed Harold (Stephen Furst) in charge, are a group of morons and bullies. The Green team, fronted by Lavitas (Brad Wilkin), is comprised of the university’s football team’s offensive line. The Whites, coordinated by weaselly Wesley (Eddie Deezen), are precursors to the characters in Revenge of the Nerds. And the Reds, with Donna (Maggie Roswell) out front, are Sorority sisters. 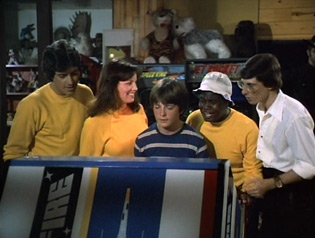 The competition takes these teams from a planetarium to a beer brewing facility (Note: among the most obvious product placements I have ever seen in any movie) to an arcade to a hotel. Along the way, the two most dastardly teams (the Blues and the Greens) do all sorts of underhanded things to gain the advantage. The Yellows pick up their fifth member, Adam’s younger brother, Scott (Michael J. Fox in his film debut), and struggle with various obstacles placed in front of them by Harold and his Merry Men. Eventually, everything turns out well. The good guys win. The bad guys get their comeuppance. The hero kisses the girl he has been flirting with. And Michael J. Fox moves on to “Family Ties” and stardom, leaving pretty much everyone else behind in a cloud of dust. (To be fair, David Naughton went on to have a solid career, with lead roles in An American Werewolf in London and Hot Dog – The Movie prior to three decades of continuous TV work. His orbit never got close to as high as Fox’s however.)

If there’s a whiff of Xanadu in Midnight Madness, it’s not accidental. The legendary Olympian bomb was released a mere half-year after Midnight Madness bowed. Many low-budget movies of this era have similar tones and styles – somewhere between a bad sitcom and a cheesy pantomime. Like Xanadu, Midnight Madness is blessed with a godawful screenplay, acting by performers who aren’t yet ready for a high school drama production, and dialogue that would only work in a silent film. Unlike Xanadu, it doesn’t have chart-topping songs, the ethereal Olivia Newton-John, or the legendary Gene Kelly. Those elements allowed Xanadu to work on a “midnight madness” level. 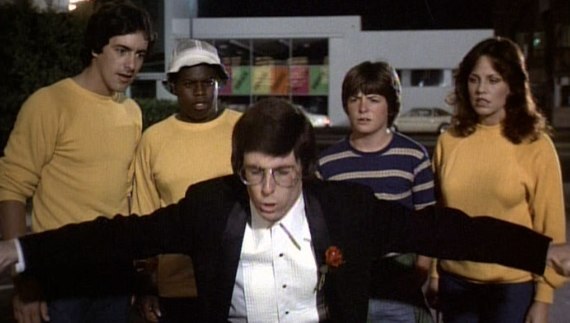 The film was co-written and co-directed by the team of Michael Nankin and David Wechter. Although a production budget isn’t available, everything about the movie screams “cheap” so it’s possible that the measly $2.9M box office gross turned a profit. Nankin and Wechter mostly stayed away from feature films after this, instead moving to television. Both had a certain amount of success in the smaller medium and continue working today.

Seen through the lens of 2017 viewing, perhaps the most startling thing about Midnight Madness is the overt stereotyping. It’s more than a little amusing to consider that these exaggerated caricatures were perceived as only slightly satirical circa 1980. Admittedly, the movie is a comedy (although sadly one in which nearly every joke fails) so nothing in it is intended to be taken too seriously but it offers a window into how pop culture once viewed nerds (weird, physically feeble dweebs) and jocks (dumb hulks). Likability lay in being in the middle with no obvious eccentricities or non-conformities. To its credit, the movie isn’t racist (one of the protagonists is a non-stereotyped black man). There are elements of sexism, especially considering the two babes that hang out around the game’s designer, Leon (Alan Solomon). However, even providing a little consideration for things like this is almost certainly giving too much thought to them, at least insofar as something as inconsequential and tacky as Midnight Madness is concerned.

Midnight Madness probably lives in the memories of some as an engagingly dumb slice of ‘80s moviedom and it’s better left there. Rewatching it more than 35 years after its emergence is more likely to taint those memories than invigorate them.