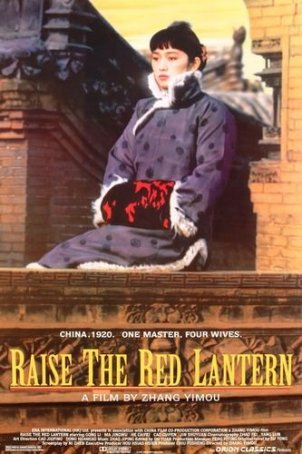 Raise the Red Lantern is one of the more sublimely beautiful and openly disturbing films of the 1990s. It is also the best work to date turned in by the actress/director combination of Gong Li and Zhang Yimou -- and this includes other impressive films like Ju Dou andTo Live. Raise the Red Lantern is one of those all-too-rare motion pictures capable of enthralling audience members while they're watching it, then haunting them for hours (or days) thereafter. With its simple story and complex themes and emotions, Raise the Red Lantern hints at the kind of film a great director like Ingmar Bergman might have made had he attempted a story set in mainland China.

The difference between Songlian (Gong Li), the fourth wife of a rich landowner, and the other three spouses, is that she is educated, and has been married (by her mother) against her will. Now, her whole world is reduced to one small compound, and the only people she sees are her husband, his family, and their servants. She is given a maid (Kong Lin) with whom she doesn't get along, and finds her new home to be a cheerless place, despite all the bright colors that adorn the inside walls.

It's the master's tradition to light lanterns outside the house of the wife he intends to join for the night. Since Songlian is new to the compound, it is expected that he will spend much of his time with her. However, on their first night together, the master is called away to soothe his pampered third wife (He Caifei), who complains of an ailment. From then on, Songlian realizes that she'll have to resort to deceit and manipulation to retain her husband's interest. And, while she doesn't necessarily appreciate his attentions, she realizes that her status in the household is directly proportional to how highly she is favored.

Within days of her arrival, Songlian's relationships with her "sisters" are established. The first wife (Jin Shuyuan), an aging woman with a grown son, does her best to ignore Songlian's presence. She is tolerant -- no more, no less. The third concubine, a beautiful ex-opera singer, is fiercely jealous of Songlian, worried that the master will find his new, educated bride more enticing. However, the second concubine (Cao Cuifen) offers friendship and kindness to the newest member of the family -- or so it initially seems.

The Chinese government didn't approve of Raise the Red Lantern, and, if you look just below the simple-yet-effective surface story, it's easy to understand why. As structured, this film can be seen as a parable for the corruption of modern society in China. Songlian is the individual, the master is the government, and the customs of the house are the laws of the country. It's an archaic system that rewards those who play within the rules and destroys those who violate them. And, when an atrocity occurs (as it did in Tiannamen Square), not only is culpability denied, but the entire incident is claimed not to have happened.

Looking beyond the political meaning, Raise the Red Lantern offers a view of life within a closed, dictatorial social community. Much of the film deals with the ever-shifting balance of power between the various concubines. Beauty and sexual appeal are secondary attributes in a battle of wits that demands guile and duplicity. Bearing a male child is more critical to each woman's standing than possessing a pleasing countenance. While the master's favor determines which of his wives commands the most power, Zhang illustrates how easily he can be manipulated.

The acting is effective enough to illuminate the multi-faceted personalities of the concubines. Gong Li shines as Songlian, who struggles to be as cold and calculating as her "sisters" in playing the "game" until a tragedy destroys her composure (and possibly her sanity). Gong's performance makes it easy to sympathize with Songlian; she is our guide through the strange, ritual-saturated world of Raise the Red Lantern.

The film is beautifully photographed using a process that captures the vividness of the many colors employed by the director. Raise the Red Lantern is visually stunning, and the appeal to the eye only heightens the movie's emotional power. The fullness of reds, oranges, and yellows is unlike anything that has been seen in an American film for years. Zhang clearly understands at least one of the fundamental rules of film making: that a great-looking picture will enhance a superior story.

Songlian's ultimate fate is wrenching, and the closing scene represents a sad epilogue to a unique motion picture experience. I don't think I've ever seen a movie quite like Raise the Red Lantern, and, since I consider it to be a defining example of Chinese movie-making and one of the best films of the '90s, I doubt that I ever will again.