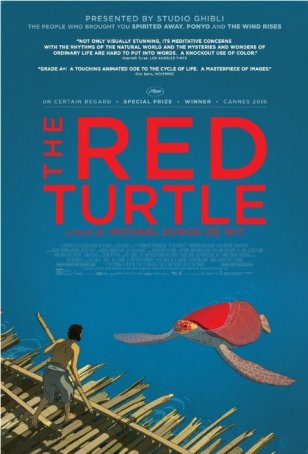 The Red Turtle is one of the most unique high profile animated films to have come along in recent years and in a way represents a repudiation of the commercial arm of the genre. Lacking even a line of dialogue and using hand-drawn images, The Red Turtle is more about feel and look than narrative. The story is a means to convey illustrations and emotions. The Red Turtle isn’t about out-Disneying Disney. It’s interested in a different market and doesn’t care if mainstream audiences come along for the ride. Although the content (no profanity, no violence, no sex or nudity) would argue that this is a family-friendly endeavor, its languid pace and dreamy approach may bore younger viewers. The Red Turtle, although entirely appropriate for children, is likely to impact more forcefully on adults. The Red Turtle conveys a simple fable. A nameless man, stranded on an island after a disaster at sea, must make peace with his situation. Possessing a resourceful nature and surrounded by abundant resources, he builds several rafts but each meets with a misfortune as he attempts to navigate the tides and currents that lead to the open ocean. A mysterious red turtle is at the heart of his problems - the creature won’t let him leave. This is no ordinary animal, however. After seemingly dying from dehydration and exposure, it magically transforms into a beautiful woman. Once he has connected with his new companion, the man is content to remain and the couple builds a life together that spans decades and includes one child. To add a little action to the mix, co-writer/director Michael Dudok throws in some near-drowning scenes and a harrowing sequence featuring a tsunami. For Studio Ghibli, the animation factory that released Hayao Miyazaki’s productions, this represents their first non-Japanese release. The producers include Isao Takahata, the director of the acclaimed 1988 The Grave of the Fireflies, and Miyazaki’s longtime collaborator, Toshio Suzuki. The film’s art style is hand-drawn, eschewing the clinical perfection obtainable by using computers. Although the characters are roughly drawn with little in the way of detail (they often appear unfinished), the backgrounds are lush and rich. Night scenes are presented in black-and-white and day scenes pop with vibrant color. Although there is no dialogue (the most any of the humans do is shout “hey!”), The Red Turtle isn’t silent. The sounds of nature abound and composer Laurent Perez Del Mar has contributed a score perfectly attuned to the movie’s style and intentions.

On one level, The Red Turtle can be seen as allegorical and there are times when its pro-environmental message is a little too forthright. Mostly, however, this can be enjoyed as a simple fairy tale about a castaway who finds peace and love in a setting where the trappings of modern life are stripped away, leaving only nature in all its beauty and fury. The ending is bittersweet - not at all the kind of conclusion Disney would champion - but appropriate to the material. Although the story is slight, the film leaves viewers with a lasting, haunting impression. The 80 minute running time seems about right - long enough to savor the visuals but not so long that the slow pace becomes wearisome. For those in the mood, The Red Turtle is a delightful, dreamlike experience.