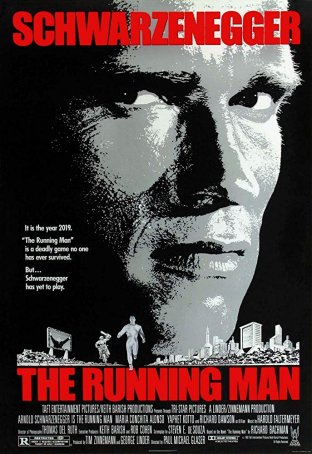 The memory is not to be trusted, at least insofar as movie evaluation is concerned. When I first saw The Running Man in theaters more than 30 years ago, I believed it to be firmly rooted in the “dumb entertainment” category where many of the era’s other action blockbusters belonged. Indeed, The Running Man was one of several late-‘80s films to latch onto the growing popularity of bodybuilder-turned-actor Arnold Schwarzenegger and in turn enhance his image. The Running Man came out in an era when Schwarzenegger was making films with titles like Raw Deal, Predator, and Red Heat. It was pre-Twins and post-Terminator. His growing fan pool expected various things from him: bad one-liners, bulging muscles, and R-rated violence. He delivers all three in The Running Man, but not much more. The screenplay, an adaptation of the Stephen King dystopian sci-fi novel (which he published under the pseudonym of “Richard Bachman”), feels like it underwent rewrites specifically designed to deify the Schwarzenegger character. It’s clunky and uneven. Schwarzenegger, never a great actor in even the best of circumstances, is particularly cringeworthy here. The direction of Paul Michael Glaser (formerly a star of TV’s “Starsky & Hutch”) is so amateurish that he wouldn’t get another shot behind the camera for five years (with the 1992 low-budget ice skating/romance The Cutting Edge). The Running Man wastes a good premise so egregiously that it feels like a desecration. The best thing about it is Richard “Let’s play the Feud” Dawson at his smarmiest. 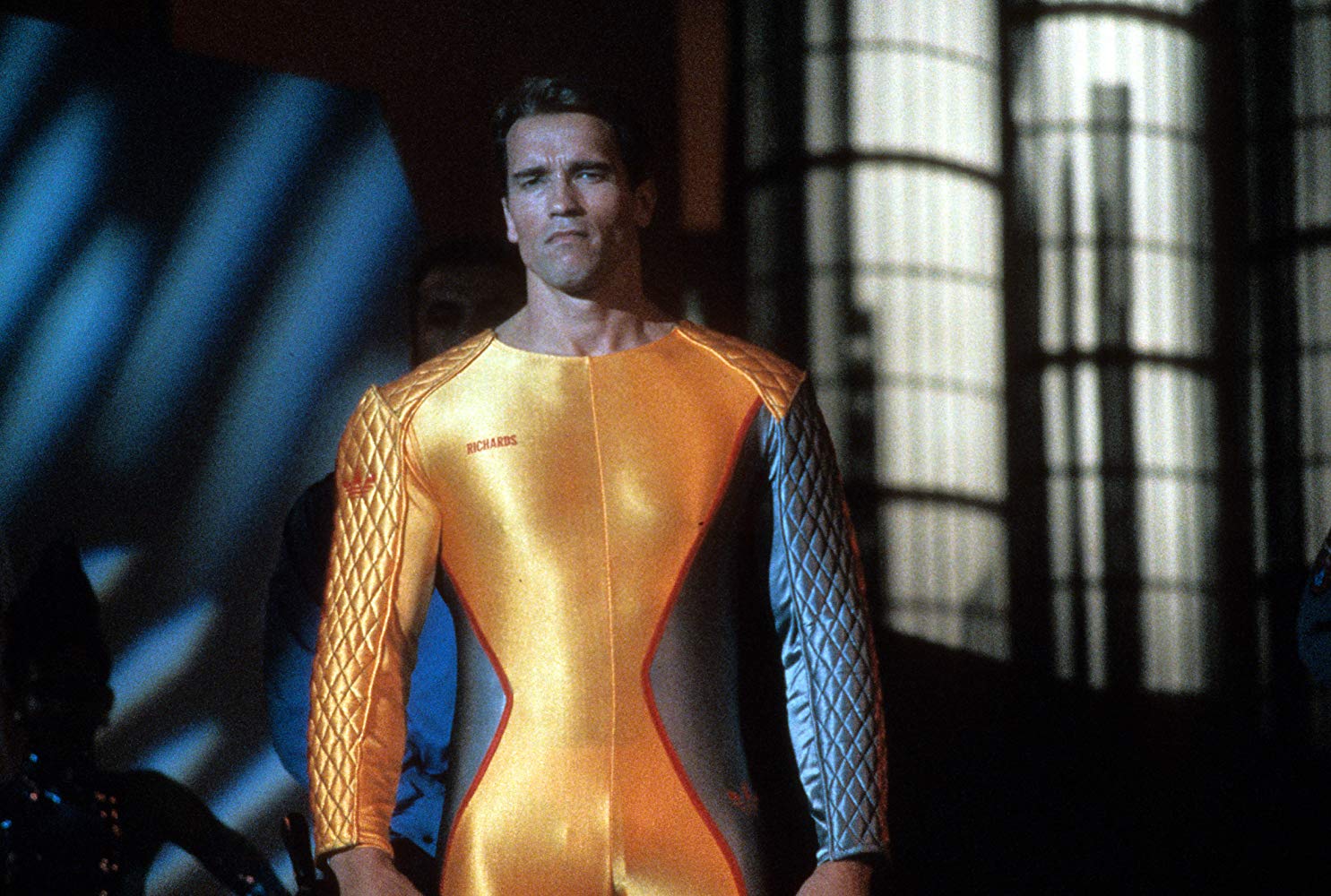 The Running Man has as its basis the familiar science fiction trope of an authoritarian future where an increasingly restless population is kept pacified by a gladiatorial TV “game” show in which criminals are given a life-or-death opportunity to win their freedom. To do so, they must become a “Running Man” and evade the “Stalkers” that hunt them through a pre-determined course. In theory, if they evade the Stalkers and get to the endpoint, they win. In reality, this rarely happens. People watch the show to see the criminals’ executions. The show’s host and producer, Damon Killian (Dawson), has a close relationship with the Attorney General and is able to get the “players” most likely to boost ratings. One of those is the recently recaptured Ben “The Butcher of Bakersfield” Richards (Schwarzenegger).

We first meet Richards when, as the pilot of a government helicopter, he is ordered to open fire on a group of unarmed rioters. When he refuses, he is relieved of command, taken into custody, and framed for the massacre that occurs when the co-pilot follows orders. After being jailed, he and two other prisoners, William Laughlin (Yaphet Kotto) and Harold Weiss (Marvin J. McIntrye), escape. While on the lam, Richards becomes entangled with a young woman, Amber Mendez (Maria Conchita Alonso), who turns him in. After researching his case, however, she discovers evidence that proves his innocence. She is caught by Killian’s thugs and entered into the games along with Richards and his compatriots, Laughlin and Weiss.

A good portion of the film focuses on the efforts of the quartet to avoid or defeat the Stalkers: Subzero (Professor Toru Tanaka), Buzzsaw (Gus Rethwisch), Dynamo (Erland Van Lidth), Fireball (Jim Brown), and Captain Freedom (Jesse Ventura). For Richards, the “end game” isn’t escape; it’s joining with the head of the resistance (Mick Fleetwood), proving his own innocence, and revealing the depth of Killian’s corruption and depravity.

Poor directorial decisions, a lackluster screenplay, and dreadful acting combine to limit the film’s effectiveness even as a brainless form of testosterone-soaked entertainment. There are times within the game when it’s possible to momentarily forget how bad the overall movie is and enjoy an isolated action scene but the manner in which the fights are filmed – lots of cutting to avoid showing stuntmen – limits the viewer’s engagement. Those who would argue for the noteworthiness of the political subtext should know that this is a sci-fi staple. Both Star Trek (the original series) and Doctor Who have featured similarly-themed episodes (“Bread and Circuses” and “Vengeance on Varos,” respectively). 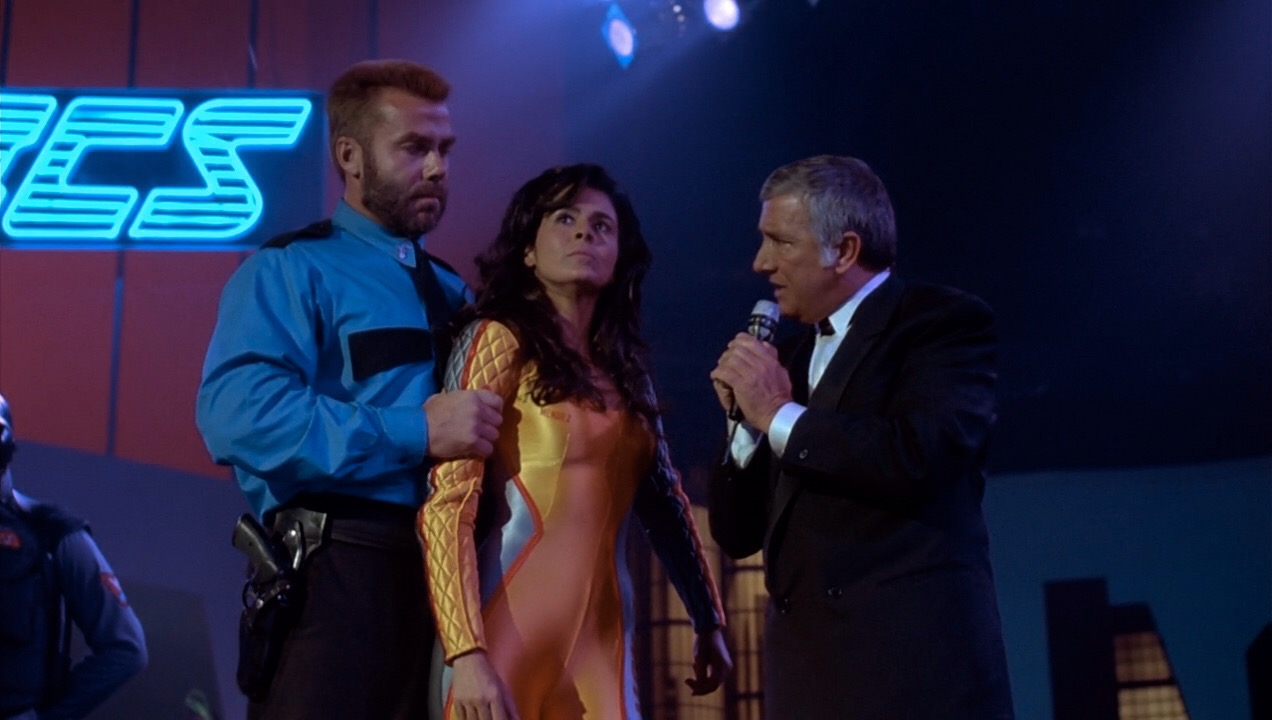 The Running Man was designed first and foremost as a Schwarzenegger vehicle. The actor claims he was drawn to the material because of its “deeper themes,” although he ultimately expressed disappointment with the final product. Whatever its shortcomings, the film was eerily prescient in some of its prognostications, including recognizing the widening economic gap between the rich and poor and latching onto the growing obsession of the population with “reality TV” (something that hardly existed in 1987).

Schwarzenegger does what was expected of him in most of his mid-1980s productions. He uses his then-signature line: “I’ll be back.” Despite his larger-than-life screen presence, however, Schwarzenegger is consistently upstaged by Richard Dawson. Dawson, riffing off his TV performance as the maverick host of the game show Family Feud, is a marvelous mix of public pomposity and behind-the-scenes malevolence. It’s a role that perhaps only Dawson could have played – Geoff Edwards, Bob Eubanks, and Bob Barker would have failed miserably. The public’s perception of Dawson was that he had a rambunctious streak and the film uses this to maximum effect. As was often the case in non-Cameron Schwarzenegger movies, the supporting players (outside of Dawson) don’t have much to do and aren’t memorable doing it. Everyone except Maria Conchita Alonso should probably be wearing a red shirt. 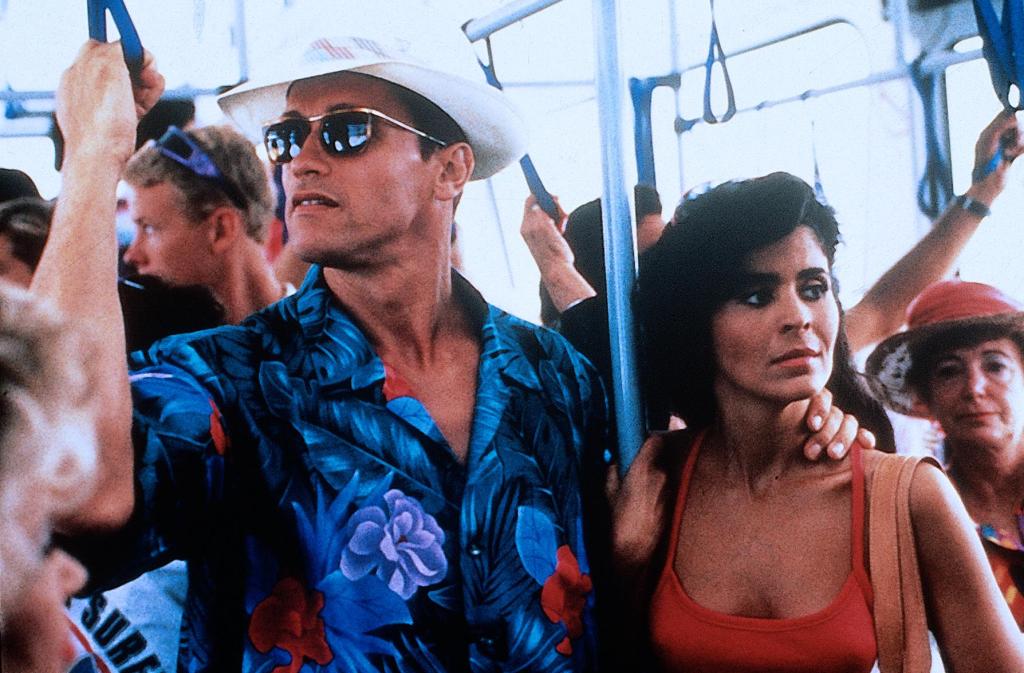 The biggest hurdle to be cleared to enjoy The Running Man 30+ years after its release is the ineptitude of the action sequences. Recent advances in special effects and computer-aided choreography make this film’s clumsy attempts at “excitement” seem primitive. We care so little about the characters that their fates are of no matter and the pedestrian manner in which Glaser films the chases and fights fails to elevate the pulse rate. This aspect undoubtedly worked better in the 1980s when audiences didn’t know better but it represents a gaping abscess for anyone watching it well into the 21st century.

Upon its 1987 release, The Running Man was greeted by a lukewarm critical reception and a moderately-positive audience appreciation. The years have been as unkind to it as they have been to its star’s career. Rewatching The Running Man today is likely to dispel any affection lingering in the memory. It’s too much a product of its time and, like many ‘80s films, wasn’t designed to last the test of passing years. Those watching it for the first time in 2019 may find it shockingly (or perhaps laughably) bad. Those revisiting it will almost certainly feel that it seemed better when they first saw it.