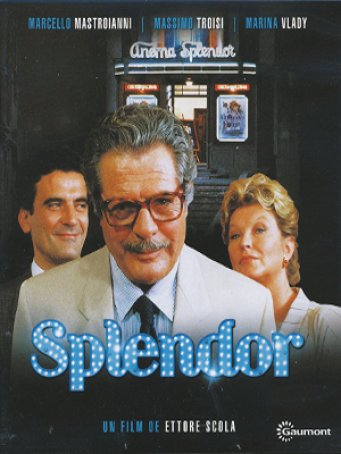 One of the great benefits of a strong worldwide communication web is the ability to explore corners of the cinematic universe previously unavailable. Despite having a recognizable international cast, a well-known director, and a story that would have delighted art-house audiences around 1990, Ettore Scola’s Splendor never made it to the United States. Even today, there is no official U.S. outlet for the film – it was too small for the effort to be made to secure the rights and market it – but few things are hidden on the Internet and, for those willing to put forth the effort, Splendor can be found. It’s well worth the hunt.

Like 1988’s Cinema Paradiso, Splendor basks in the history of cinema. It’s all about the love of movies and how real life can be influenced by those crazy, amazing flickers of light and shadow. Every frame of Splendor is suffused with the romanticism of sitting in the dark, gazing at the screen. There’s a lovely scene in which a motion picture plays to a standing room-only audience. Scola’s camera focuses not on the screen but those watching it. To the left, we see the playful flirtation of a young man and a young woman. In counterpoint, on the other side of the auditorium, there’s a not dissimilar interaction that doesn’t go as well. This scene recalls how the fragments of our own life and circumstances can cause us to react differently to a film than the person next to us. That’s part of the alchemy of the communal experience.

The movie’s “present” is the late 1980s but most of the story looks back over the roughly 60-year span encapsulating the life of the main character, Jordan (Marcello Mastroianni), and his relationship with cinema. The film switches freely from black-and-white to color, with the latter sequences taking place in the present. Memories – some gauzy fantasy and others slightly more hard-edged – are in black-and-white. Splendor’s earliest scene transpires in a village square where a young Jordan and his father set up a projector and, using a sheet for the screen, show Fritz Lang’s Metropolis to a large group of onlookers.

The next time we catch up with Jordan, his father has erected a grand indoor theater, the Cinema Splendor, with state-of-the-art sound and projection systems and a retractable roof. Jordan comes home from the second World War to a showing of It’s a Wonderful Life and weeps unashamedly as Jimmy Stewart discovers how beloved he is and the chorus sings “Old Lang Syne.” Soon thereafter, Jordan takes over the Splendor, guiding it through immense popularity in the 1950s and 1960s into a gradual decline through the 1970s and eventual bankruptcy in the 1980s. The movie opens and closes with The Splendor’s end, although the final scene mirrors that of It’s a Wonderful Life so closely that Scola feels compelled to show about two minutes of the classic film to emphasize the connection. (I was also reminded of the “Captain, my Captain” scene from Dead Poets Society, although that film came out after Splendor.) Capra-corn can be dangerous territory for a filmmaker – there’s treacle and mush on either side of a narrow path - but Scola’s approach is perfect.

There are three main human characters – Jordan; Chantal (Marina Vlady), a French dancer Jordan falls in love with and who comes to work for him at the theater; and Luigi (Massimo Troisi), the awkward patron who has an affair with Chantal and eventually joins her and Jordan in running The Splendor. After coming together in the 1950s, these three form a tight trio through the years. The fourth character is the theater itself. By today’s standards, The Splendor is quaint and dated but, unlike the generic multiplexes that rose to prominence starting in the 1970s, this movie house has character. It plays movies as varied as the aforementioned It’s a Wonderful Life to Wild Strawberries, The Great War, The Battle of Algiers, Z, Day for Night, and Amarcord. Extended scenes from these (and others) are seen. Numerous other films are referenced in various contexts (including, amusingly, La Dolce Vita, the famous collaboration between director Federico Fellini and actor Marcello Mastroianni – creating a “meta” moment). Students of cinema, especially the Italian variety, will derive more from Splendor than those without a solid foundation but the movie’s essential themes are powerful enough to captivate anyone regardless of their background.

Although director Scola never achieved the kind of international fame enjoyed by some of his more celebrated countrymen, he enjoyed a long and productive career and gained awards recognition in countless film festivals, including Cannes (where Splendor was nominated for the Palme D’Or). His most lauded film was 1977’s A Special Day, which earned Mastroianni one of his three Oscar nominations. The two lead actors enjoy a strong on-screen bond. Mastroianni, of course, is best known for his collaborations with Fellini. Troisi had his biggest break five years after Splendor, when he co-directed and starred in Il Postino (dying of a heart ailment literally hours after completing filming). Splendor’s leading lady, the object of both Jordan and Luigi’s affections, is played by ‘60s sex symbol Marina Vlady, who proved herself over the years to be a more capable actress than many of her similarly-regarded contemporaries.

Splendor’s tone is alternatively playful (a quality emphasized by Armando Troajoli’s score) and nostalgic but never bitter or somber. The word “magical” applies. Perhaps the most notable thing about the movie is the effectiveness with which it illustrates the passage of time. Things that are so vital and seemingly immutable in their prime gradually pass into obscurity as the future rises up to sweep them away. Now, little more than 30 years after multiplexes choked the life out of smaller venues like The Splendor, those same chain theaters find their existences endangered by the next wave. There’s a universality to the story told by Splendor that will resonate with nearly every viewer.