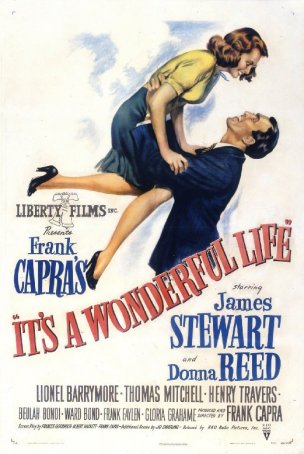 Every year around Christmas, there are two stories guaranteed to show up somewhere, sometime on television: A Christmas Carol (of which there are several good versions) and It's a Wonderful Life (of which there is only one). After its copyright was inexplicably not renewed in 1974 and the film tumbled into the public domain, It's a Wonderful Life could be found on the air literally dozens of times every holiday season, with versions as varied as crisp, black- and-white prints to murky, colorized bastardizations. Only recently (1994, to be exact), when NBC obtained exclusive rights to the film, has the Christmastime tide of broadcasts been stemmed.

There's no doubt that It's a Wonderful Life is one of today's most popular Christmas films, easily surpassing other favorites such as A Miracle on 34th Street and the aforementioned A Christmas Carol/Scrooge. Of the many myths surrounding Frank Capra's 1946 film, the most often repeated one involves the movie's initial reception. Contrary to common belief, it was not an immediate hit. Nor was it a complete critical and popular failure. Back in 1946-47, It's a Wonderful Life received mixed reviews, ranging from a lionization in The Hollywood Reporter to a vicious trashing in the New Yorker. Although nominated for five Academy Awards (including Best Picture and Best Actor, in what Stewart called his favorite role), the movie was shut out at the ceremony. And, despite Capra's popularity at the box office, It's a Wonderful Life barely made back its cost.

In fact, it was the expiration of It's a Wonderful Life's copyright that transformed it into a Christmas staple. Once the film began showing with such frequency during the month of December, a whole new generation of movie-lovers discovered (and fell in love with) the previously-obscure release. Critics of the '70s and '80s took a look at the movie, and the reviews were almost unanimously positive (one notable exception being that of Pauline Kael, who called it "doggerel" and "patronizing"). It's a Wonderful Life achieved its deserved recognition, albeit four decades after it was first released.

What is it about this film, an uplifting, sentimental fable about the importance of the individual, that strikes a responsive chord with so many viewers? Some might argue that it has something to do with the season, but I don't buy that reasoning. It's a Wonderful Life is just as good in July as in December -- the time of the year has little to do with motion picture quality. Rather, I think It's a Wonderful Life has earned its legion of followers because it effectively touches upon one basic truth of life that we all would like to believe -- that each of us, no matter how apparently insignificant, has the power to make a difference, and that the measure of our humanity has nothing to do with fame or money, but with how we live our life on a day-to-day basis. It's a Wonderful Life asks and answers a question that all of us think of at one time or another: "What would this world be like if I had never been born?"

There's no doubt that It's a Wonderful Life is a "feel good" movie. In fact, at the time of its initial release, it was dubbed "Capra-corn." Yet the film's manipulation is intensely skillful and sincere in a way that is rarely apparent in any recently-released, "uplifting" title. In today's cynical climate, I doubt that a picture like this could be made. The last Capra-esque fantasy to reach screens was the Nicolas Cage/Bridget Fonda romance, It Could Happen to You, and that sunk like a rock at the box office. Despite being brought to life during the '40s, It's a Wonderful Life offers a timeless story with a universal message.

As almost every avid movie-lover knows, It's a Wonderful Life tales the story of George Bailey (Stewart), the unsung, beloved hero of Bedford Falls. As a child, George was selfless, risking his own life (and losing his hearing in one ear) to save his brother from drowning. As an adult, he gave up his dreams of traveling the world and going to college to stay home and manage the Bailey Building and Loan Society after his father passed away. Throughout his life, George lived by a creed that always placed human need above riches, and, as a result, his only wealth was in his friends and family.

The film's villain is a miserly old man named Potter (played with consummate nastiness by movie great Lionel Barrymore), who uses his considerable wealth to bleed the citizens of Bedford Falls dry. The Bailey Building and Loan Society is the only institution in town that he doesn't own, and he's willing to do anything to get his hands on it – lie, cheat, bribe, steal… There's no end to the schemes that Potter devises to destroy George. Yet the Baileys always seem to end up on top.

The first two-thirds of It's a Wonderful Life recaps George's life during the span of years from 1919, when he's a child dreaming of becoming an explorer, until 1946, when he is firmly established as the rock of Bedford Falls. The film has romance (George's courting of Mary, who is played by Donna Reed), comedy (an unexpected swim at a high school dance), and tragedy (the death of Peter Bailey). And, although the predominant tone is upbeat, Capra effectively captures the darkness of George's mood as his mounting personal and financial troubles plunge him into an abyss of despair. Those who mistakenly think of It's a Wonderful Life as all light and sunshine forget the grimness of certain later scenes, especially those that culminate in George standing on a bridge, contemplating suicide.

Enter Clarence (Henry Travers), George's lovable, bumbling guardian angel, who has come to Bedford Falls to prove to George that his life is worth living. To defend his position, he grants George one wish: to see what the world would be like if he had never been born. As he and George travel through the nightmarish alternate reality, they observe how much worse off many people would be. Mary is a lonely spinster; George's brother, Harry, is dead; George's uncle, Billy, is in an insane asylum; and Potter owns the entire town.

It's this often-copied segment of It's a Wonderful Life that reminds us of the film's kinship with Dickens' A Christmas Carol. In both stories, the visions supplied by supernatural beings convince their subjects of the value of life and the importance of the contribution of the individual. Despite the apparent difference in the nature of each story's protagonist, both popular Christmas tales strike similar chords with audiences. Watching It's a Wonderful Life is truly an enriching experience.

Capra not only had a knack for superior storytelling; he was a master of casting. From the beginning, he always envisioned Jimmy Stewart as George. Although the role had originally been developed under another producer for Cary Grant, when Capra took control of the project, he began rewrites with Stewart in mind. It would be both mens' return to the screen following war service. And, although Capra never regained the popularity he had attained during the '30s, Stewart became more in demand than ever. His ability to show a darker side of himself – something he did for the first time in It's a Wonderful Life – led to him being accepted in roles that demanded an element of moral ambiguity, such as that of L.B. Jefferies in Alfred Hitchcock's Rear Window. To his dying day, Stewart would be known as an icon of small-town American values, but it's worth noting that the actor was capable of expanding beyond that stereotype.

Even though Donna Reed was not Capra's first choice for Mary (Jean Arthur, who co-starred with Stewart in two of the director's previous efforts, Mr. Smith Goes to Washington and You Can't Take It with You, was otherwise committed), it's hard to imagine anyone else in this role. Reed embodies the independence and sweetness needed to capture George's heart. And who can forget the romantic electricity in George and Mary's first kiss, while Sam Wainwright waits on the other end of the phone line?

The supporting cast is both excellent and memorable. Lionel Barrymore's Potter makes Scrooge seem like a genial gentleman. Thomas Mitchell plays Uncle Billy, George's lovable-but- incompetent partner in the Bailey Building and Loan Society. Henry Travers is Clarence, the second-class angel trying to earn his wings. Frank Faylen and Ward Bond are Ernie the taxi driver and Bert the cop, respectively (the Sesame Street duo of Bert and Ernie got their names from these two). And Gloria Grahame is Violet, Bedford Falls' "bad girl", who has a soft spot for George.

Technically, It's a Wonderful Life is impressive. A huge, 300-yard long representation of Bedford Falls' main street was constructed, with over 80 stores and buildings, and 20 transplanted oak trees. Since the film was shot in the middle of summer, the copious amounts of snow used during the winter scenes had to be man-made (3000 tons of shaved ice, 300 tons of gypsum, 300 tons of plaster, and 6000 gallons of chemicals were utilized). Through the unique magic of motion pictures, it's impossible to tell that not one flake of snow is genuine.

Combine the characters, the story, the message, and the acting, and it's easy to see why It's a Wonderful Life isn't just a holiday favorite, but a great movie by almost any standards. There are a few cynics who will disparage this film, but, in a "feel good" genre clogged with imitators and inferior features, It's a Wonderful Life stands high above the rest. Whether you view this film in the middle of the summer or at Christmas, Capra's greatest film represents one of the most transcendent and joyful experiences any movie-lover can hope for.