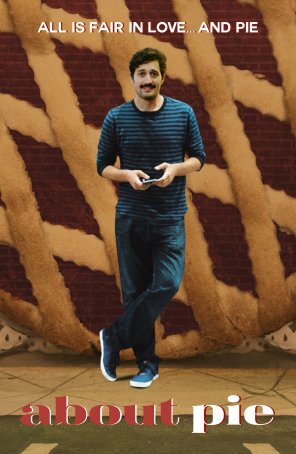 When one considers movies and pies, the first title likely to come to mind is American Pie, one of the defining comedies of the 1990s. Although Joshua Lester’s 2021 feature debut isn’t going to change that, the indie rom-com offers a different take on love and pastries, illustrating that both are available in a wide variety of flavors and textures. The overall structure comes closer to that of a road movie with its quirky characters and episodic approach but Lester’s central character (called only “The Pie Man” in the credits) is affable and the movie breezes by, never threatening to overstay its welcome. Although rarely uproarious, there are some solid laughs to be had.

About Pie chronicles the ups-and-downs of The Pie Man (Lester) in his quest for sex, friendship, love, and the perfect pie. The film follows Lester’s character on a variety of first dates with very different women, but all have one thing in common: pie. The Pie Man has decided that the perfect first date food is a pie (the filling can vary – raspberry, blueberry, pumpkin, apple, key lime, etc.) because everyone likes pie and it’s more intimate than coffee and requires a lesser commitment than dinner.

About Pie details about a half-dozen of these dates, including a playful one with Sophia (Skye LaFontaine), who coaxes The Pie Man into baking a raspberry pie with her (spoiler: it doesn’t go well); a connection with high school crush Jackie Collins (Amanda Westlake); and a lesbian musician (Julia Fae). Additional dates are referenced in flashback. To provide a little more balance, Lester delves into other aspects of the main character’s life: his sessions with a therapist (Colette Freedman); his interactions with his best male buddy, Garret (Greg Hirshland), which typically involve playing video games and/or watching the Star Wars movies; and a late-night visit to his dad (Ed Regine), when the latter has a (minor) health crisis. As with any film that relies of a series of loosely-connected vignettes (any of which could stand on its own as a short), some are more compelling than others. Most of the dates vary from cute to endearing, with light-hearted repartee interwoven with flirtatious glances. The strongest chemistry is evident between Lester and Sky LaFontaine, which explains why she has more screen time than the other women. Their first date, which opens the film, is a winner. Amanda Westlake’s Jackie, however, is fine during the first encounter but over-the-top during a bizarre follow-up. I would have liked to have seen a little more of The Pie Man’s lost love (Shakira Saul), but she is relegated to flashbacks.

The therapy sessions are effective. Colette Freedman is credible as a psychologist and the interaction between the two is more akin to what happens during an actual appointment (as opposed to what we normally encounter in movies). On the other hand, some of the scenes with Garret feel forced and artificial – this is likely due in part to Greg Hirshland’s acting limitations (to be fair, he’s not a career actor). One sequence, with the two friends arguing about what Lester should wear on his date with the previously-unattainable Jackie, feels more like a rehearsal than an actual take. The dialogue is off, the editing is awkward, and the performances are stilted. Garret’s subsequent appearances are less off-putting. As for the late-night visit to Dad…it starts alright but, toward the end, I got the feeling that Ed Regine was channeling Rodney Dangerfield. 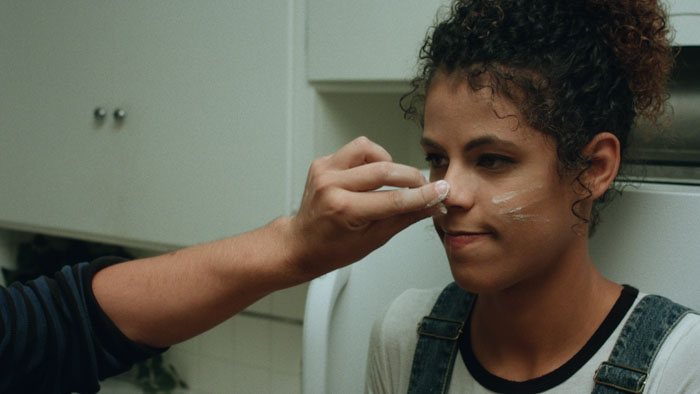 Following a satisfying denouement that features a different dessert, About Pie ventures into the Twilight Zone with an oddball, meta credits sequence. I’m not sure whether I loved this or hated this. It’s undeniably unique and, because it happens at the very end, it can’t be accused of taking the viewer out of the story, but I’m not sure that it adds anything to the experience. It makes one wonder, however, whether About Pie is intended to be autobiographical and whether The Pie Man is a fictionalized version of the writer/director/producer/editor/star. (Those are a lot of hats!)

Lester maintains a light tone throughout, mostly avoiding melodrama (the scene with the lead character’s father being the exception) while also skirting the kind of overt, desperate humor that sinks many a rom-com. The decision to focus on first dates is an interesting one, since it provides a window into a prevalent mindset about the prominence of the “honeymoon phase” in any relationship. The principal’s arc – one of self-discovery through connecting (and failing to connect) with women – comes to a believable, natural conclusion as Lester doesn’t force his closing scene to conform to genre expectations.

About Pie is currently available for streaming at Amazon Prime.