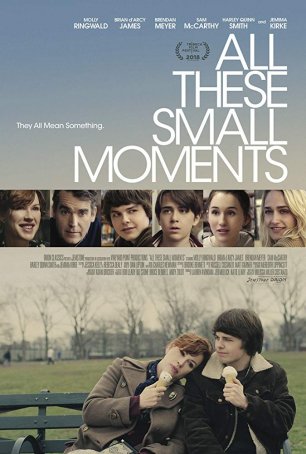 All These Small Moments is a coming-of-age drama exploring the life and times of teenager Howie Sheffield (Brendan Meyer). By using a collage approach to highlight various aspects of Howie’s day-to-day existence, first time director Melissa B. Miller (who also wrote the screenplay) is able to emphasize her thesis that, for average people, the transition to adulthood doesn’t happen suddenly, as a result of one moment, but gradually over time.

For Howie, these small moments include interactions with his mother, Carla (Molly Ringwald); father, Tom (Brian d’Arcy); and brother, Simon (Sam McCarthy). The home life isn’t stable. Carla and Tom’s marriage is disintegrating and their father’s infidelity is impacting both boys. Meanwhile, Howie is harboring an infatuation (bordering on an obsession) with an older woman (Jemima Kirke) he sees every day on the bus. He inches progressively closer to introducing himself, even following her home one day, until fate intervenes and pushes them together. Finally, in school, the tables are turned when he finds himself the object of a girl’s interest. She (Harley Quinn Smith) is more attainable than his bus-riding muse.

All These Small Moments offers a mix of honesty and artifice. Some of the scenes simmer with truth; others are too obviously the construct of a screenplay. Many of Howie’s interactions with Jemima Kirke’s Odessa feel forced. I found myself asking whether this is really how an adolescent like Howie would behave in this situation; I didn’t believe many of his actions. Likewise, there’s something contrived about his exchanges with Lindsay. Would any teenage girl really pull up her shirt in school just to dispel a rumor about a skin condition?

On the other hand, Carla and Tom’s relationship is presented with sensitivity and authenticity. The way the movie explores their regrets and self-recriminations as they attempt to forge a new connection reflects the age-old question about what happens to romance once lovers have lost the spark. Tom’s explanation for his unfaithfulness is more honest and less self-serving than that of many philandering movie husbands and opens the door for us to care more about these two supporting characters than the lead. That makes Howie’s story seems more like a tangent than the centerpiece. Miller is also apparently not a fan of quiet moments. Nearly every minute of this 1 ½-hour film is presented with a musical accompaniment – often the kind of vaguely anonymous indie music that graces many low-budget soundtracks. A little of this can go a long way. In All These Small Moments, there’s too much. It creates a sense of audio claustrophobia. Music this relentless goes beyond setting the mood; it wants to manipulate it.

For those who haven’t seen Molly Ringwald since her John Hughes days, this offers a chance to catch up with her as a more seasoned performer. Physically, she resembles the girl from those ‘80s movies but her character in All These Small Moments requires a different set of acting accommodations. Brendan Meyer’s Howie is almost too nice and too timid, but that’s more an issue of how the character has been written than how he is portrayed. A couple of second-generation actors fill supporting roles. Kevin Smith’s daughter, Harley Quinn, plays Howie’s school romantic interest and Kevin McCarthy’s son, Sam, is Howie’s brother.

For her feature debut, Miller has opted to do something personal and, although the results are uneven, the intimacy of the approach is evident. The adult characters are better rounded than the children, making for an odd dynamic when one considers where the focus lies but, even during his weakest scenes, Howie holds the viewer’s sympathy. All These Small Moments doesn’t have a suitably unique identity to warrant seeking it out but those who find themselves watching it may be sufficiently engaged to stay.