Over the years, the “Rip Van Winkle” concept (inspired by the central conceit of the Washington Irving 1819 short story) has been used by a number of films. The idea – a person hibernating for a number of years and waking up to a vastly changed world – is rich enough to have provided the premise for everything from introspective art films to mainstream comedies. (My personal favorite is the mostly-forgotten 1999 feature, Blast from the Past, with Brendan Fraser and Alicia Silverstone.) For American Pickle, Seth Rogen applies a twist in that he plays not only an early 20th century Jewish European immigrant, Herschel Greenbaum, but the man’s great-grandson, Ben.

An American Pickle is pretty much “The Seth Rogen Show” in that none of the other actors have more than brief appearances. Sarah Snook, who plays Herschel’s beloved wife, probably has the second-most screen time and she’s out of the picture before the opening titles. Most of the movie involves Rogen interacting with Rogen and this is problematic on a number of levels. First, neither version of Rogen has a good feel for the shifting tone of the movie. Secondly, without another human to play off, Rogen is frequently stiff. Or, to put it another way, he has zero chemistry with himself.

The central conceit is dumb but the screenplay wisely makes fun of its inability to provide a credible explanation for the time travel. When we first meet Herschel, he’s a ditch digger in the Old World. After marrying Sarah and avoiding a sacking of their peaceful town by Cossacks, he heads across the ocean and arrives at Ellis Island. In New York, he gets a job at a pickle factory as a rat-catcher. One unfortunate day, he loses his balance and falls into a pickle barrel. When the factory is condemned and ordered closed moments later, Herschel becomes “pickled” for the next hundred years. When he awakens to a surprised 2020 world, his entire family has died except for one descendant, Ben. 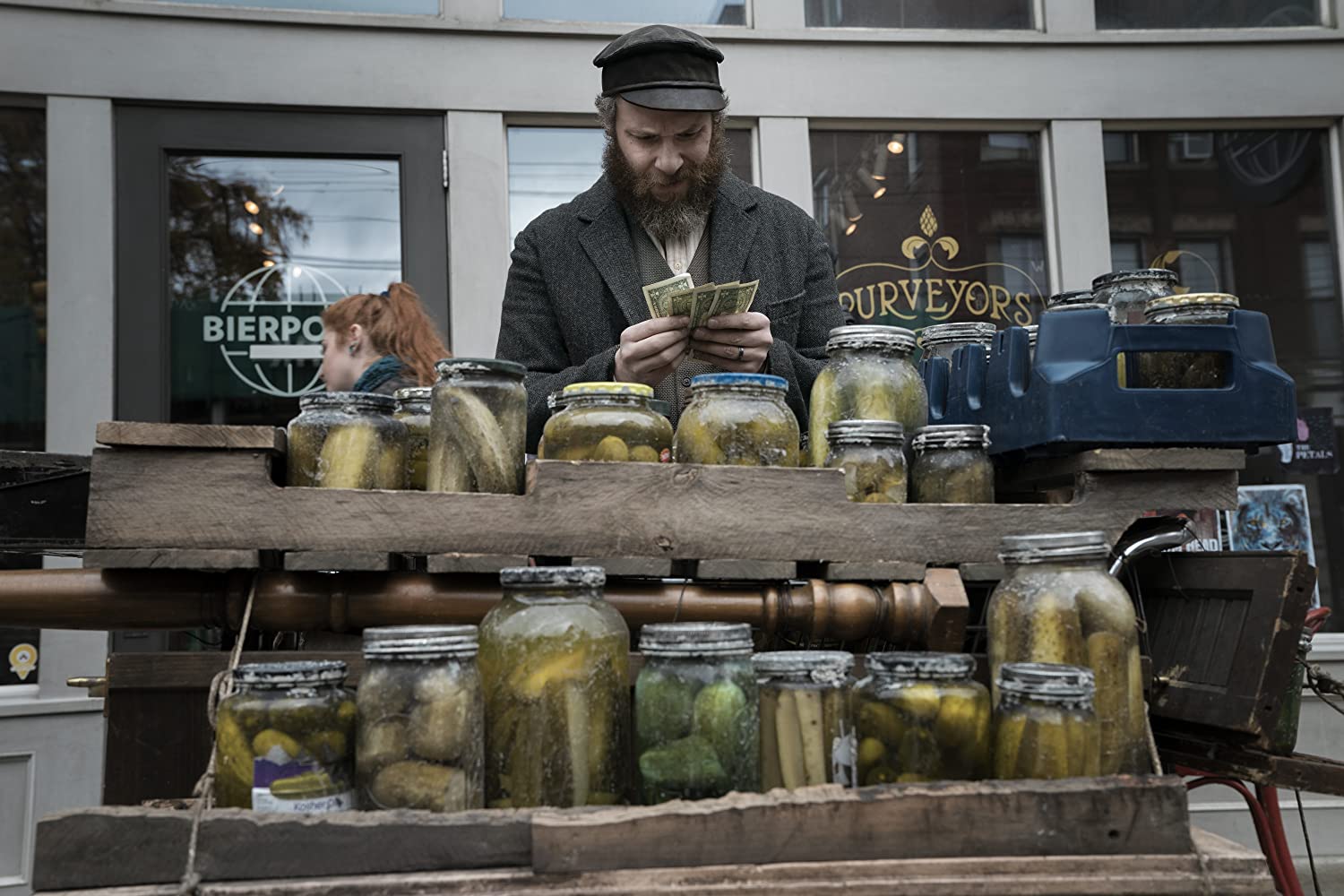 Ben, a freelance app developer, is initially delighted to have a family member to connect with. After all, he and Hershel are the same age (at least in terms of years lived). But looking alike doesn’t guarantee compatibility and conflict erupts. The two surviving Greenbaums engage in a war with Herschel’s actions torpedoing Ben’s ability to sell an app he has been working for five years and Ben retaliating by attacking Herschel’s start-up pickle-making venture.

The screenplay, credited to Simon Rich from a short story he wrote, is tonally all over-the-place. Early on, there’s a real sense of pathos as the newly-revived Herschel copes with the realization that his beloved wife has been dead for 80 years, the son he never knew is also gone, and even his grandson (Ben’s father) has died. For the most part, however, An American Pickle wants to adopt a lighter tone but many of the attempts at comedy aren’t funny. And subsequent dramatic episodes feel canned and artificial. There are some amusing (or at least moderately clever) moments, such as when an all-too-obvious association between Herschel and the current president ends with a twist, but the writing (like almost everything else) is maddeningly inconsistent. 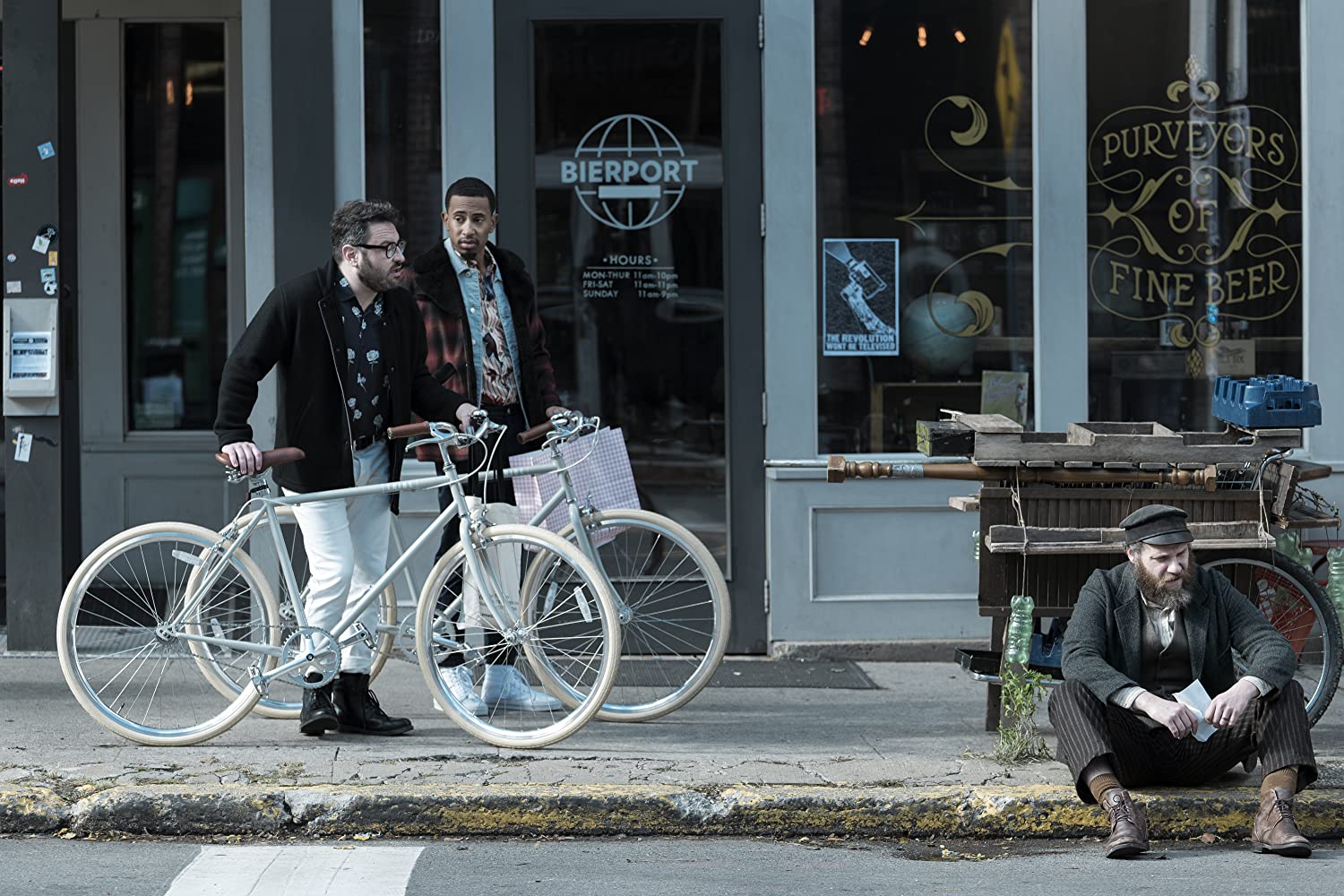 Director Brandon Trost (a longtime cinematographer in his feature debut) is never able to make the Rogen/Rogen pairing work. From a special effects’ perspective, everything is smooth. But there’s no life in their interactions. There’s no passion, no spark, no human emotion. One wonders whether the movie might have worked better if the filmmakers had cast someone other than Rogen to play Ben. We know that Rogen is capable of giving strong, emotionally honest performances but at no point do we see more than a glimmer of that in An American Pickle. Rogen is in “comedy mode” here but the material isn’t funny enough for that to work.

Like a bottled Vlassic Dill, this movie offers only an imitation flavor of something more genuine and robust. It’s not without taste but lacks the qualities necessary to do something worthwhile with the Rip Van Winkle premise.