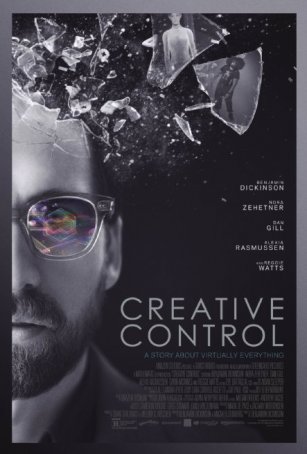 At first glance, Creative Control appears to be sci-fi. It takes place in the (near) future and focuses on technology that probably isn’t far from being accessible. On closer examination, however, it at times plays more like an absurdist comedy. It’s a strange little movie - by turns fascinating and frustrating. Its strong thematic thrust is counterbalanced by an uneven and at times farcical narrative and the characters are more avatars than well-realized individuals. (This may, in fact, be director Benjamin Dickinson’s intent since the movie is in part about the blurring of the lines between absolute and virtual realities.)

Creative Control transpires in Brooklyn some 10-20 years (or thereabouts) beyond the present. This futuristic landscape is familiar but with some notable differences. Electronics have become an even bigger part of daily life and interaction. Keyboards and touchscreens are projections. Lives are managed and controlled by cellphones. And perfect virtual reality has become a holy grail. Enter Augmenta: a platform that claims to have made the next giant leap forward, creating a virtual reality that is fully immersive. As is soon evident, however, there are dangers associated with wearing Augmenta’s geeky glasses. When reality and fantasy begin to blur, it can be difficult to maintain one’s grip on sanity and the potential for addiction looms large. For many people, the ability to sink into an avatar-populated world of their own creation would be more appealing than struggling along in this one.

David (Dickinson) is a high-energy advertising agent whose career is about to take a major upturn when he reels in the Augmenta account. However, although Augmenta proves to be a professional boon for David, its impacts on his personal life are less certain. As his curiosity about its capabilities becomes an obsession, a wedge develops between him and his live-in girlfriend, yoga teacher Juliette (Nora Zehetner). He fantasizes about starting an affair with Sophie (Alexia Rasmussen), the girlfriend of his best friend, Wim (Dan Gill). While David’s attempts to seduce Sophie in the real world are clumsy and ineffectual, he encounters less resistance with an Augmenta-designed avatar who’s all-too-willing to meet him for clandestine hotel assignations.

Like most science fiction, Creative Control goes after big issues by employing allegory. Dickinson is concerned about the tendency of technology to disconnect people from society, although the issue isn’t new. (In fact, this idea formed the premise of the first Star Trek pilot, “The Cage”, which was made more than 50 years ago.) There are significant problems with Creative Control’s approach, however. The only well-developed character is David who is, unfortunately, a jerk. Self-obsessed, addicted to pills and drink, and rude, he’s not easy to sympathize with. When his life starts to fall apart, it’s hard not to gloat. None of the men and women in his orbit are remotely three-dimensional. They have all the depth of Augmenta avatars, which may be intentional. Sophie is attractive but unattainable. Wim is a philandering hedonist. And Juliette adheres to a vacuous, hippie philosophy influenced by yoga, free love, and astrology. Her bizarre monologue toward the end is incomprehensible.

Dickinson’s directorial style stands out far more forcefully than any of his characters. Creative Control is presented mostly in black-and-white. The exceptions are images of Sophie’s avatar, which are in color - making a statement about what she adds to David’s life. Dickinson has an affinity for long takes and often shoots through windows, emphasizing the disconnect between the viewer and the characters. We’re voyeurs. Reflections abound. Visually, Creative Control never ceases to be interesting - so much so that the movie’s aesthetic becomes more compelling than its storyline and people. Thinking back on Creative Control, I can conjure up images more easily than characters. A movie needs both.

For the most part, Creative Control held my attention (the exception being the Juliette stand-alone scenes). The movie could have done a better job illustrating the grip Augmenta achieves over David but I understand that budgetary constraints may have influenced storytelling aspects. Perhaps because Creative Control’s cautionary message is so familiar in sci-fi literature, the manner in which it is presented here is stale and the ending lacks the impact it might have had if we had cared about David or believed in Juliette. Problems aside, Creative Control is a compelling debut for Dickinson - his talent shines through the holes and cracks in the movie’s foundation. Creative Control looks more interesting than it is.