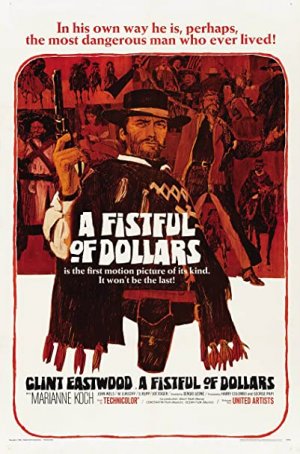 Sergio Leone's A Fistful of Dollars is notable for two things: it was the first of a new motion picture subgenre that flourished during the mid-to-late-'60s and it boosted the image of one of America's most durable stars. When A Fistful of Dollars reached Italian screens bearing the title of Per un Pugno di Dollari, it introduced the world to the Spaghetti Western. That appellation, an insult that quickly caught on and became a label, resulted from pejorative press references disparaging the movie's Italian background. A Fistful of Dollars also jump-started Clint Eastwood's big-screen career. While this was not his first movie role, at the time when he agreed to top Leone's marquee, he was best known for the TV series Rawhide. After this film and its two sequels, the actor became a hot commodity.

A Fistful of Dollars was the first in a trilogy of Spaghetti Westerns about "The Man with No Name." (The other two entries, For a Few Dollars More and The Good, the Bad, and the Ugly, were made in 1965 and 1966, respectively.) It's actually a misnomer - Eastwood's character has a name, although it changes for each of the films (here, it's "Joe") - but it made for a good marketing device. All three movies were released in the United States during 1967, and, to one degree or another, they ultimately influenced nearly every Western made thereafter (including Sam Peckinpah's landmark The Wild Bunch and Eastwood's own Unforgiven).

A Fistful of Dollars is a remake of Akira Kurosawa's Yojimbo, with guns replacing swords, the setting shifted from Japan to the Old West, and Eastwood standing in for Toshiro Mifune. During his lifetime, Kurosawa acknowledged that he was pleased with the way his films had been translated into Westerns (The Magnificent Seven was based on The Seven Samurai). A Fistful of Dollars is not as good a film as Yojimbo, but it is better known in Europe and North America. And both movies are superior to Walter Hill's ill-advised 1996 version of the same story, Last Man Standing (which featured Bruce Willis in the Eastwood role). 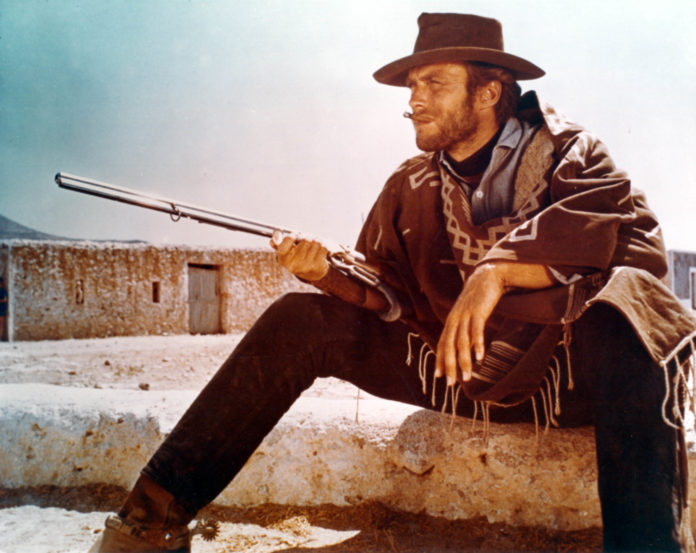 The strengths of A Fistful of Dollars relate to style, not storyline. There's nothing terribly complex or original in the movie's plot. An American loner who goes by the name of Joe (Eastwood) enters the small Mexican town of San Miguel. As far as the audience is concerned, he has no past, and, if not for his incredible skill with a gun, he would have no future. (Only on one occasion does he hint at an event that occurred before the film's opening credits.) He immediately displays his prowess with a revolver by shooting four men who have insulted his mule. Two rival families are vying for control of the virtually deserted town: the Baxters and the Rojos, both of whom are equally amoral and greedy. Joe decides to play one side off against the other, in the process reaping a financial windfall. The local bartender, Silvanito (Jose Calvo), watches Joe's double-dealings with a mixture of astonishment and amusement. When it comes to making money, Joe is virtually flawless, but he gets tripped up when his conscience becomes involved. After helping a woman, Marisol (Marianne Koch), escape from the clutches of the vicious Ramon Rojo (Gian Maria Volonté, aka Johnny Wels), Joe learns the meaning of the phrase "no good deed goes unpunished" as his attempts to deceive the Rojos backfire and he is captured, beaten, and tortured. The film ends, predictably, with a big shoot-out.

The element that differentiates A Fistful of Dollars from the majority of its predecessors is its gritty, un-romanticized view of the Old West. Although there are some grandly impressive landscape shots, Leone is more concerned with emphasizing the dirt and grit of this setting than its scenic beauty. His characters are not clean-cut good guys and black-to-the-core bad guys, either. Joe is out for himself, and, on those rare occasions when he experiences pangs of conscience, he's almost ashamed of them. Most traditional Westerns have clearly defined lines separating heroes from villains; only in Spaghetti Westerns do both sides begin to stray into the gray areas in between. Leone also makes frequent use of the close-up, and oftentimes his characters are shown to be sweating and bleeding. Traditional Westerns tend to present violence as relatively clean and bloodless; Leone makes it messy. This approach adds a little more tension to the gunfights. There's not such a sense of surety that the protagonist will (or, in some cases, should) win. 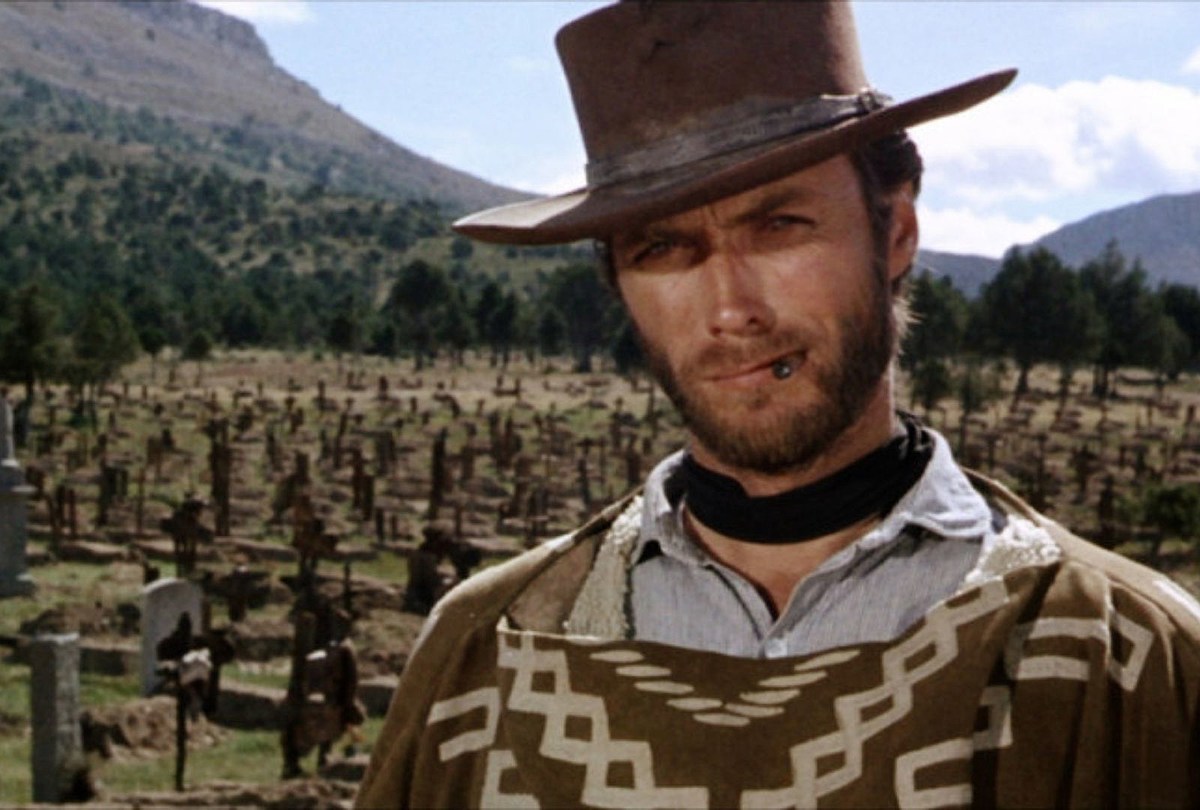 The score is by veteran composer Ennio Morricone (working under the "Americanized" pseudonym of Dan Savio). As was true of Leone and Eastwood, Morricone's participation in all three "Man with No Name" movies became an important linking element. A Fistful of Dollars does not represent Morricone's best work, but many of the musical themes and ideas introduced here are persuasively developed in his work for For a Few Dollars More and especially The Good, the Bad, and the Ugly. When he started working on the trilogy, Morricone was a relatively unknown composer with only a few movies to his credit; by the time he finished The Good, the Bad, and the Ugly, he was much in demand, and went on to become one of the world's most respected and prolific score writers.

The single scene that perhaps most clearly establishes that this is not a typical Western is the sequence in which Joe is tortured. At the time, this kind of frank and graphic display was virtually unheard of for a Western - a genre that was usually about righteous men triumphing over underhanded crooks while making the untamed land safe for good people. Even by today's standards, when blood flows more freely than it does here, the sight of Joe being kicked, pummeled, and ground underfoot is disturbing and effective. 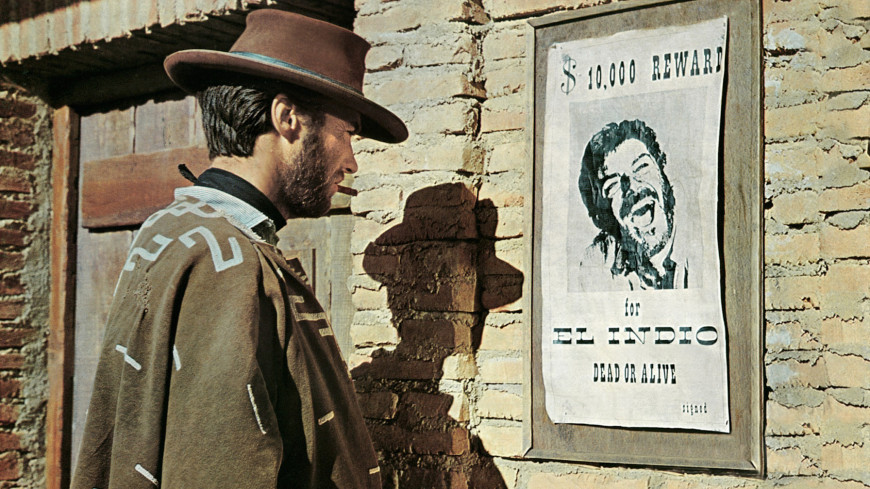 Another thing that's unusual about A Fistful of Dollars is its dry, lean sense of humor. The film contains a number of humorous moments, but all of them are underplayed and presented so grimly that at times the viewer wonders if he or she is meant to laugh. I defy anyone, however, not to at least crack a smile at Joe's reaction when he realizes that he has punched a woman in the face. For those expecting chivalrous behavior from their hero, can such an action be more at variance? Like the opening scene, when Joe impassively watches a father and child being tormented by one of the Rojos and does not intervene, this moment underlines the simple fact that Eastwood is playing a different sort of lead character.

For all its innovations, A Fistful of Dollars is still an unpolished production. The dubbing into English varies from adequate (in the case of Eastwood, who uses his own voice) to horrible. There are times when the editing is ragged; certain cuts appear more abrupt than they should be. And, with the exception of Eastwood, the acting is amateurish and over-the-top. Plus, it takes a fair degree of suspension of disbelief to accept the scenario being played out - far more than is necessary for the tightly written Yojimbo. 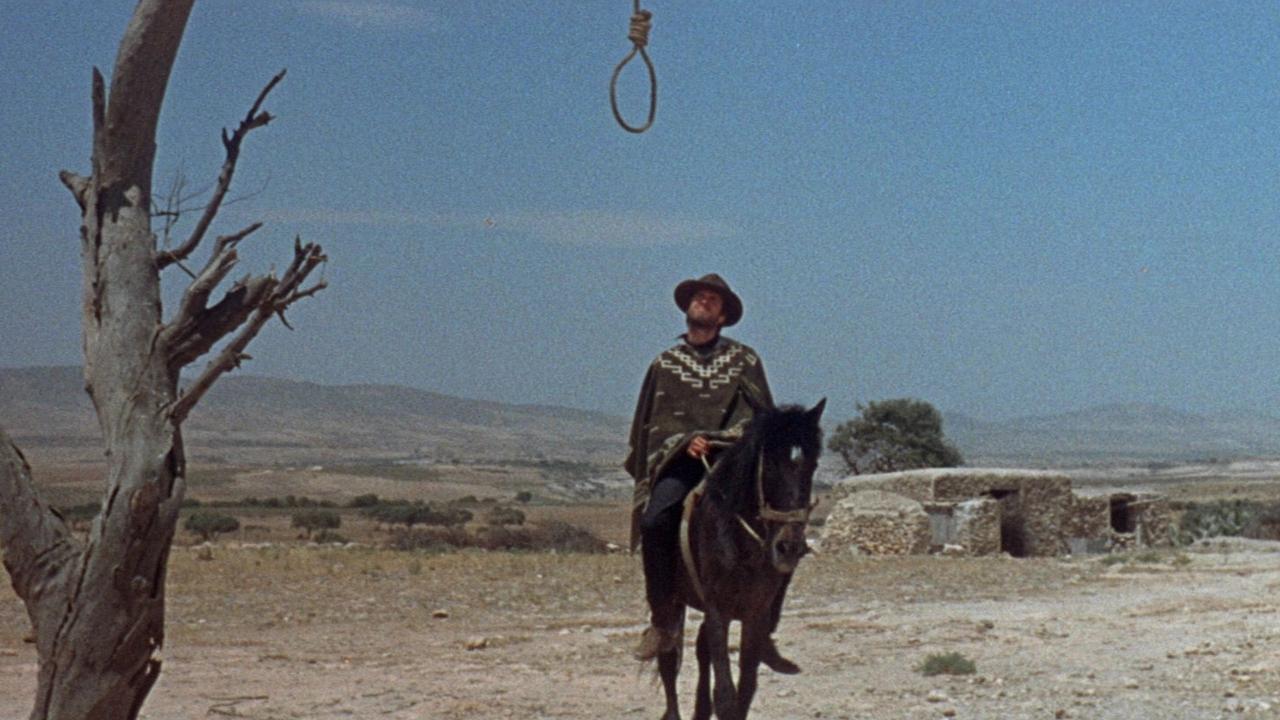 Eastwood's on-screen reputation evolved from the role he plays here. Tough, laconic, and unflappable, Joe is the progenitor of the characters that Eastwood would make famous during the decades to come – he is the Dirty Harry of the Old West. With his week's worth of stubble, cowboy hat, poncho, and hand-rolled cigarette, Joe lives by his own rules, freely ignoring all others. "The Man with No Name" is the perfect descriptor of his personality. Eastwood, who has a limited range as an actor but can be very good in the right part, is the perfect fit for Leone's atypical hero. (Ironically, Leone originally envisioned Henry Fonda in the role, but he was too expensive. It was first offered to Charles Bronson, who passed, calling A Fistful of Dollars "the worst script" he had "ever read." Both would subsequently work for the director when he made Once Upon a Time in the West.)

While it's true that some "important" films turn out to be dull when viewed in retrospect, A Fistful of Dollars is thoroughly enjoyable, with the obvious flaws serving only to enhance its capacity to entertain. In many ways, it's not great movie-making, but it introduces themes, approaches, and characters that would be refined during the course of the next few years, as the Spaghetti Western's popularity expanded. Leone's two follow-ups to A Fistful of Dollars, For a Few Dollars More and The Good, the Bad, and the Ugly, are vastly superior efforts, with the latter striving for epic status. By comparison, A Fistful of Dollars is really little more than a series of loosely connected shoot-outs – but, as Sergio Leone proved, there can be a lot of fun in that.