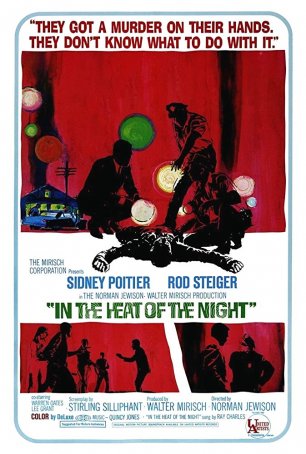 In the Heat of the Night was the first film – and not the last – to capture the Academy’s attention with its clear-eyed but hopeful examination of race relations in the South during the 1960s. Based on John Ball’s 1965 novel of the same name, Norman Jewison’s film uses a murder mystery investigation as the impetus to chronicle the changing relationship between Virgil Tibbs (Sidney Poitier), a black Philadelphia homicide detective, and William Gillespie (Rod Steiger), a white Mississippi chief of police. Made contemporaneously with the events it depicts, In the Heat of the Night has a rougher edge than some later films looking back at this era. Tibbs and Gillespie don’t develop a friendship. Their feelings evolve from mutual antipathy to grudging respect – but no further. They come to regard each other as human beings, which is something of a triumph considering the deep-rooted nature of the bigotry in that time and place.

The movie opens with the discovery of a body. Officer Sam Wood (Warren Oates), doing his nightly rounds of Sparta, Mississippi, finds the lifeless corpse of a businessman, Philip Colbert, lying out in the open. Colbert’s death is a big deal – he had come to Chicago to Sparta with the intention of opening a factory that would employ 1000 souls. An immediate manhunt begins for the killer. This results in the apprehension of Tibbs, who is deemed “suspicious” (primarily because of the color of his skin). When Gillespie learns that his suspect is a respected cop from up North, he is placed in an uncomfortable situation – one that becomes more awkward when Tibbs’ boss makes the homicide “expert” available to help in the investigation. 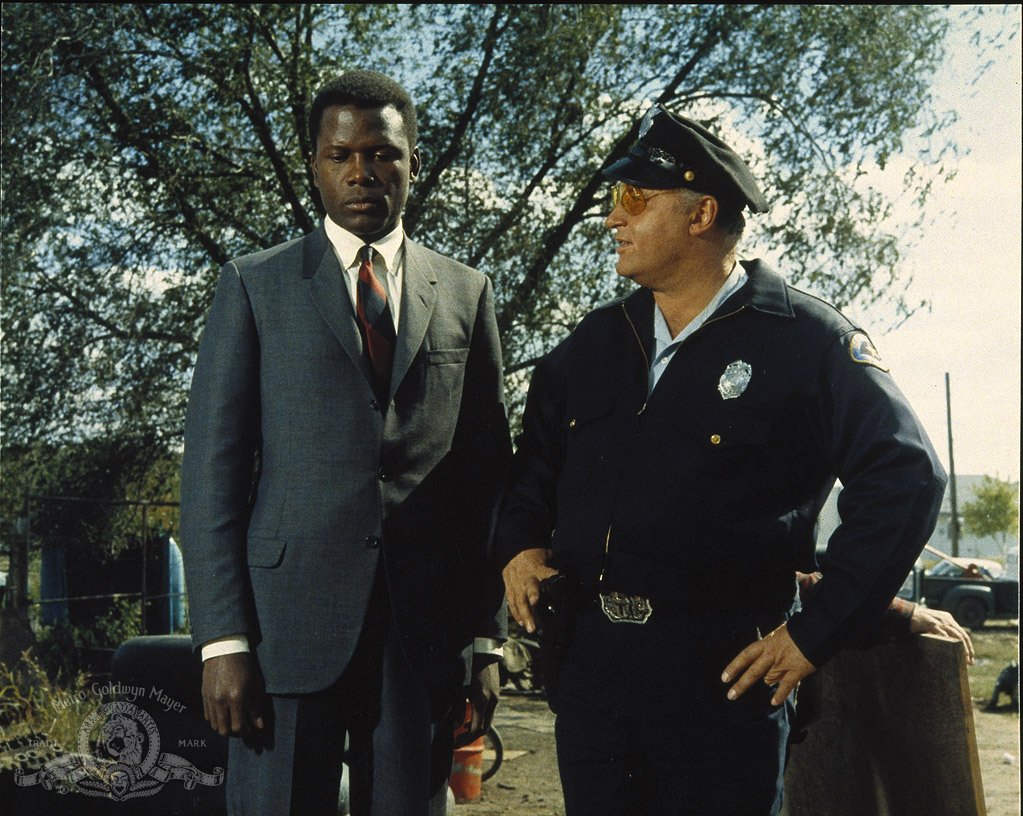 The mystery/procedural aspects of In the Heat of the Night are neither compelling nor exciting. If the movie was to be graded purely on its merits as a thriller, it would rate below-average. The film’s strengths emerge from the various character relationships and how Tibbs’ participation in the investigation (as an outsider and a black man) impacts the results. Gillespie, impelled by expediency and political pressure, arrests two innocent men (not including Tibbs) before the real culprit is unmasked.

Jewison came to the project with an anti-racist agenda – a view that more could be achieved when people of different races cooperated than when they were blinded by prejudice. Released four years after Martin Luther King’s “I have a dream” speech, In the Heat of the Night illustrated the possibilities of this imagined reality. The message was well received in Hollywood – the movie was given seven Academy Award nominations (winning five, including Best Picture) – and at the box office, where it grossed 12x its production budget. 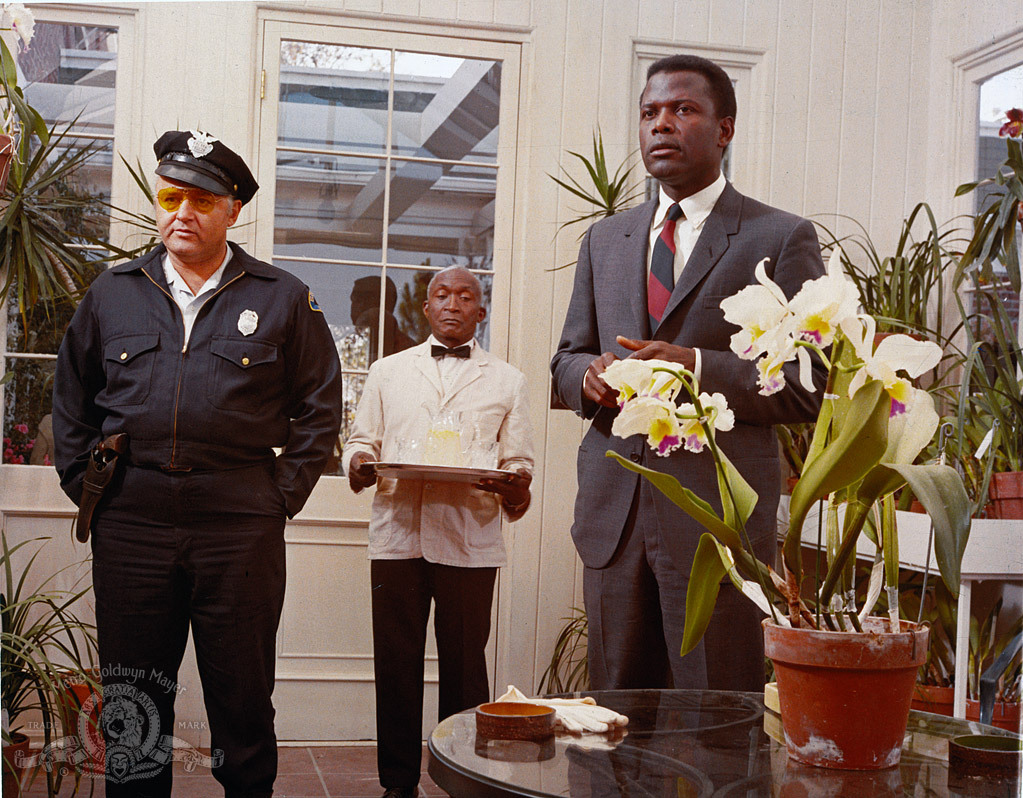 When In the Heat of the Night opened, Sidney Poitier was at the height of his popularity. He had already become the first black male actor to be nominated for an Oscar (1958’s The Defiant Ones) and to win the Best Actor award (1963’s Lilies of the Field). By 1967, he was a box office draw with three major releases:  In the Heat of the Night, Guess Who’s Coming to Dinner, and To Sir, with Love. Roger Ebert made the following accurate observation about Poitier’s performance in this film: “This was [his] first opportunity to step down from his series of noble characters and become angry and frustrated for a change.” Although Poitier was not nominated as Tibbs, his bubblegum-chewing co-star, Rod Steiger, took home the statue – it was the lone Oscar of Steiger’s career (following two previous nominations).

The best-known scene was controversial at the time. During a tense interview between Tibbs and plantation owner Endicott (Larry Gates), things get physical. Enraged at being interrogated by a black man, Endicott lashes out and slaps the police officer. Tibbs retaliates with a blow of his own – an act that stuns both Endicott and Gillespie, who is present. The confrontation has a raw, unrehearsed feel in part because Jewison insisted that the actors actually strike one another. Some unprepared white viewers gasped aloud while watching the scene. (Black audience members often cheered.) 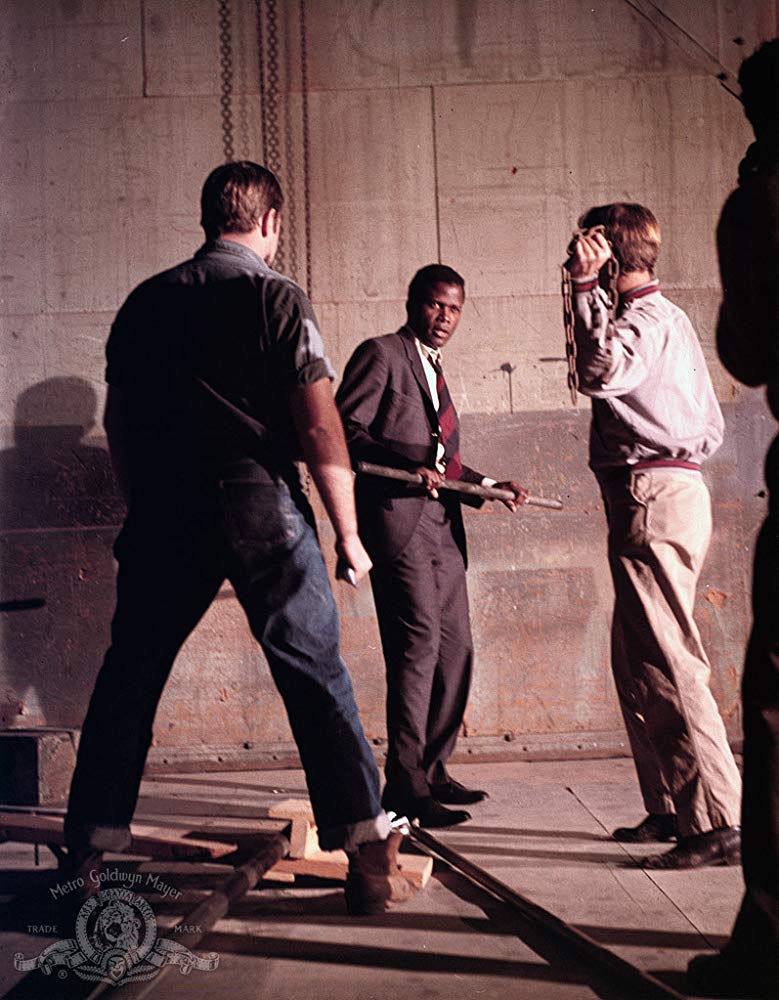 In the Heat of the Night’s popularity resulted in Poitier returning twice more as Virgil Tibbs – in 1970’s The Call Me Mister Tibbs! And 1971’s The Organization. Both were straightforward crime stories and, with the racial elements shifted into the background and Steiger’s character not returning, the sequels were poorly received. In the 1980s, In the Heat of the Night was re-imagined as a TV series with Carroll O’Connor as Gillespie and Howard Rollins as Tibbs. It ran for eight years, achieving a Top 20 position in the Nielsen ratings during its best seasons.

Fifty years after its release, no one remembers the forgettable crime at the center of In the Heat of the Action but everyone (at least those who have seen the film) recalls the strength and complexity of the central relationship. Although developed as a contemporary drama/thriller, In the Heat of the Night has been transformed by the passage of time into a period piece. As the country continues to wrestle with issues of race and bigotry, the movie’s themes remain relevant and the honesty with which Jewison and his cast address them gives In the Heat of the Night more power than the underlying crime story would suggest.