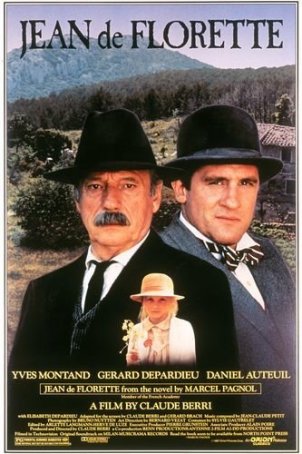 WARNING! Heavy spoilers ahead! Beginning with the fifth paragraph, this review reveals details about key plot points and the endings of both Jean de Florette and Manon des Sources. Proceed at your own risk.

Although released with a three month separation in France and a four month gap in the United States, Jean de Florette and Manon des Sources (sometimes called Manon of the Spring), form a single, unbroken narrative. Now, with both readily available on DVD, it makes little sense to view one without the other. The natural "intermission" at the end of the first film allows the experience to be spread over two nights, but it's hard to imagine anyone watching Jean de Florette and not moving on to Manon des Sources, and under no circumstances should the second movie be seen first. In this case, the order isn't just important, it's paramount. (Yet it should be noted that re-watching Jean de Florette after seeing the ending of Manon des Sources adds a layer of poignancy to the proceedings that are not there on the initial viewing.)

The two films are inextricably bound, and were planned and filmed at the same time with most of the same cast and crew. Thematically and narratively, it is impossible to grasp the scope of what Claude Berri is attempting without seeing the entire project. The contemporary analogy would be The Lord of the Rings. Watching an individual chapter of Peter Jackson's masterpiece gives a sense of greatness, but, for the full impact, one cannot simply watch a single film.

When Berri completed Jean de Florette/Manon des Sources, he may not have recognized that he had crafted one of the greatest French films of all time, but he certainly understood that the duology would be seen as an achievement. Few films develop characters as deep and multi-dimensional as those represented here. Rather than taking the easy and less satisfying route of relying upon stereotypes to form the background of his movie's population, Berri expends the necessary time for the lost art of characterization. There are certainly protagonists and antagonists, but simplistic labels like "hero," "villain," "good," and "evil" become irrelevant. There's a karmic sense of justice in the way things evolve, but this isn't one of those movies where the bad guys get their comeuppance in the final reel. Things play out more subtly, and with a much grander sense of tragedy.

Technically, the film couldn't be better. From a visual standpoint, it is perfect (or, if not, close to it). The cinematography by Bruno Nuytten captures the beauty of the countryside and the difficulties encountered by the inhabitants. Jean-Claude Petit's score, which borrows liberally from Verdi's "La Forza del Destino," is orchestrated in such a way that it enhances the film's emotional impact, rather than existing as a pleasant background distraction.

The first film begins by introducing us to the two characters around which the entire story revolves. They are Cesar Soubeyran (Yves Montand), a wealthy landowner in rural France, and his only living relative, a nephew named Ugolin (Daniel Auteuil). Since Cesar never fathered any children (or so he believes), Ugolin is the last of the Soubeyrans, and, more than anything else, Cesar is devoted to the continuation of his proud bloodline. So, even though Ugolin is ugly, tentative, and slow on the uptake, Cesar aids and mentors him, intending to set him up financially so that he can attract a healthy wife who will bear him many children. Ugolin has his heart set on developing a carnation farm (rather than raising animals or food), and, when Cesar learns how much the flowers are worth, he wholeheartedly supports the endeavor. But there is a problem. Carnations require copious amounts of water during the withering heat of the long, hot summer - far more than Ugolin's well can provide. There is a nearby spring, but it is on Ugolin's next-door neighbor's property, and he refuses to sell. After the man's "sudden" death, Cesar feels certain that Ugolin will be able to buy the property from the heirs, but, to be sure, the two of them block up the spring, making the property next-to-useless for farming purposes. Nevertheless, the new owner of the property, Jean Cadoret (Gerard Depardieu), the son of Florette, an old flame of Cesar's, has dreams of living off the land and raising rabbits. So, despite the paucity of water, he brings his wife, Aimee (Elisabeth Depardieu), and daughter, Manon (Ernestine Mazurowna), to live there. Seeking to find ways to encourage Jean to leave and sell him the land, Ugolin befriends the former city-dweller, but stands by and says nothing as Jean's quest for water ultimately results in his death.

The second movie begins ten years after the first ends. Ugolin is a prosperous man, but Cesar is worried that he is still unmarried. Manon (now played by Emmanuelle Béart) has become a recluse, living the life of a shepherdess in the wilds near the village. One day, Ugolin spies her bathing nude and is instantly lovestruck. He begins an inept courtship, but Manon finds him repulsive. Simultaneously, she is attracted to a newcomer to the town, Bernard Olivier (Hippolyte Girardot). Then the past returns to haunt Cesar and Ugolin, as it is revealed that the two conspired to hide the spring's existence from Jean, causing his death. Learning of this, Manon embarks upon a course of revenge. By the end of the film, Ugolin has hanged himself and Cesar has had the most bitter shock imaginable. Jean Cadoret, the man he worked so assiduously to destroy, was his son by Florette. The Soubeyran line thus ends because of his own actions.

One noteworthy difference between the two films is the variance in tones. The first movie is lighter, due in large part to the boundless optimism displayed by Jean. There are times when it seems that he might succeed despite the obstacles thrown in his way by Cesar and Ugolin. Ugolin, meanwhile is deeply conflicted about his actions. He genuinely likes Jean and wants to help him. Only the prodding of Cesar and dreams of thousands of carnations keep him from revealing the truth about the spring. His actions are despicable, but he is not, and a pleasant sort of camaraderie develops between Jean and Ugolin.

Manon des Sources is a grim motion picture. The tables are turned, bitterly and without pity, on Ugolin and Cesar as Manon sets out to avenge her dead father. Once she learns that these two were behind the deception that resulted in Jean's death, she acts decisively. Ironically, her decision - to cut off the town's water supply at its source - is not what finishes either of her enemies. Ugolin is consumed by his own unrequited love and self-loathing. Cesar learns the bitter truth from an old acquaintance who returns to the village after a lengthy absence.

Although the overall length (about four hours in total) and presence of subtitles will intimidate many potential viewers, those who venture into the world of Jean de Florette will find their efforts rewarded. This is one of the most powerful, emotionally complex tales ever translated from the written page to the silver screen. (Marcel Pagnol wrote the novel that serves as the source material.) It is a tragedy of epic proportions, but on a very personal scale. We feel for all these characters and what they have lost, even those that, in the hands of a less adept filmmaker, might have come across as cookie-cutter bad guys. We feel no joy in their inevitable downfall. (Nor, for that matter, does Manon, although she sheds no tears when Ugolin perishes.)

With Jean de Florette/Manon des Sources, Berri makes a telling point about human nature. The picture he paints is unflattering. Jean, whose defining characteristics are his innocence and boundless optimism, is destroyed by those around him who are motivated by deception and self-interest. There are times when Jean appears indomitable, but, in the end, even he cannot overcome the cruelty of nature and his fellow men. Ugolin and Cesar are not the only guilty ones; the village inhabitants aid in the concealment by remaining silent. In the second film, the power shifts from Ugolin and Cesar to Manon, and she acts without mercy or compassion. In the end, she is the only one to live "happily ever after."

The acting, from that of the four major stars to the numerous supporting cast members, is without flaw. Veteran Yves Montand, a huge international star and sex symbol in the '50s, '60s, and '70s, marks his last great role here, portraying Cesar as a cunning, amoral individual who is so obsessed with a single goal that he cannot see the consequences until it is too late. Montand's performance, especially in the final scenes of Manon des Sources, is brilliant. We admire and despise Cesar at the same time. Daniel Autueil, one of France's leading actors, hides behind enough makeup to gjve him a troll-like appearance. He plays Ugolin as weak, greedy, and pathetic. Another of France's internationally recognized personalities, Gerard Depardieu, brings a sense of charming naïveté to Jean, making him something of a gentle giant. Then there's Emmanuelle Béart. At the time, she had appeared in a number of films, but Manon des Sources made her a star, both at home and abroad. This was her second film opposite Autueil, with whom enjoyed a ten-year relationship that proved fruitful both personally and professionally. Béart is magnetic in Manon des Sources, captivating with her untamed beauty and forceful acting. Her dialogue is sparse, so much of her performance is accomplished through her expressive eyes.

[MPAA inconsistency alert: during a scene early in the film, Béart is shown fully naked as she frolics in a grotto. Despite this, the MPAA justly awarded the film a PG rating. (This is back when the MPAA made sense more often than not.) If Manon des Sources had been released in the mid-to-late 1990s, it probably would have been accorded a PG-13. (Consider Titanic.) If it was released today, the nudity - as innocent as it is - might be enough for an R. How can a classification system be taken seriously when it exhibits such wildly inconsistent standards for its ratings?]

Director Claude Berri is one of those filmmakers who often takes several years between productions. He had been working for nearly 25 years in France before releasing Jean de Florette, but this was his first movie to receive widespread art-house distribution in North America. Since then, nearly everything he has made has been picked up for at least a limited North American release. Over the years, Berri has won a slew of awards (including one Oscar, for a short subject) and film festival citations. Of all his projects, however, Jean de Florette/Manon des Sources remains his most recognized and highly praised work.

I would be the first to admit that a story detailing the water-related tribulations of a rural farming community doesn't sound interesting. But that's not really what Jean de Florette/Manon des Sources is about. Those are the trappings that establish the story, but the meat of the film explores the complexity of human actions and interactions. These people come alive on the screen, becoming (for four unhurried hours) as vivid as anyone we know. Berri is sympathetic to all the characters, including those who act from less-than-noble motives. He does not demonize or lionize. He challenges us to accept these individuals and their plights, and to spend time in their company. The twists taken by the narrative, the quality of the performances, the superlative cinematography, and Berri's masterful direction make this one of the best motion pictures ever to cross the Atlantic Ocean.