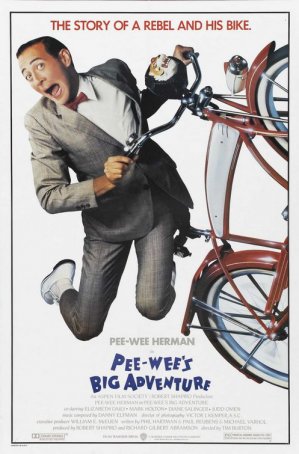 Gene Siskel infamously gave Pee-Wee’s Big Adventure a zero-star review, stating “Obviously, Pee-Wee is tolerable only in Pee-Wee doses…” Although that seems unnecessarily harsh, especially in retrospect (now that the film is commonly viewed as a cult classic), there’s some truth to the sentiment that Pee-wee Herman is an acquired taste and, if you haven’t fully embraced his quirkiness (which lies somewhere between Adam Sandler and Mr. Bean), 90 minutes of this character may feel like a very long time.

Had Paul Reubens not been caught with his pants down (literally) at an adult movie theater in 1991, who knows how the character of Pee-wee Herman would be viewed decades later. Although Reubens’ reputation has been rehabilitated, his alter-ego never regained the popularity he once enjoyed. The character’s first motion picture appearance (transitioning from a popular stage show), Pee-Wee’s Big Adventure, is more notable in a historical context as being the co-film debuts of director Tim Burton and composer Danny Elfman. 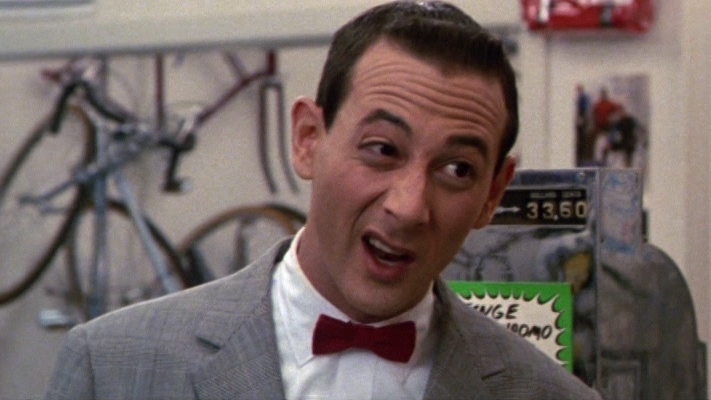 Pee-Wee’s Big Adventure is less a fully-realized motion picture than a collage of quirky set pieces and fantastical, comedic adventures. It preceded (and led to) Reubens’ TV series and represented the first exposure many viewers had to the man-child character. Burton’s influence on the movie is minimal – this wasn’t his film – but there are times when one can spot darker/weird moments that are more likely to have come out of his imagination than Reubens’ (although it admittedly can be difficult to tell).

The quintessential problem with Pee-Wee’s Big Adventure is that the antics and personality of the title character are tailor-made for short-form bites. The half-hour TV show, “Pee-Wee’s Playhouse,” was perfect. By the midway point of the feature film, the wide-eyed optimism, naivete, and boundless energy have transformed the initially fascinating individual into a somewhat grating anti-hero. Pee-wee is like a clown. Some see him as a harmless example of comedic excess whose bumblings are designed to provoke laughter. Others see his over-the-top façade as hiding something darker. (That’s where the Burton influence comes in.) 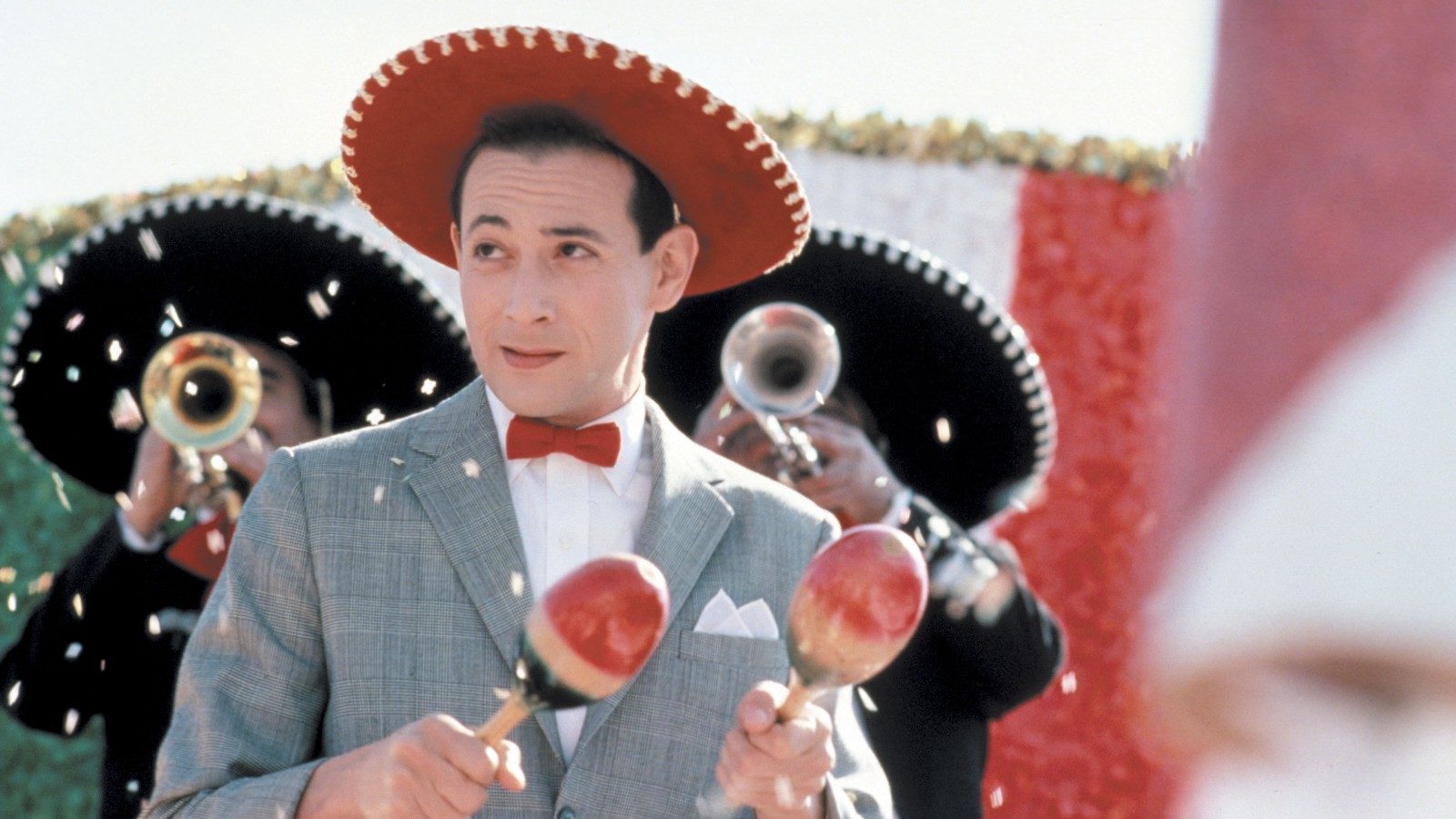 The film’s plot can be described in a single sentence: Pee-wee Herman, an adult stuck in a state of perpetual childhood, searches for his beloved stolen bike. The story follows the general blueprint of a road trip movie, but this is the kind of warped journey one might expect if David Lynch decided to make a family-friendly film. (Something he actually did a few years later with The Straight Story.) Along the way, Pee-wee encounters a number of strange characters and finds himself in dubious situations. He ends up in a car with an escaped convict, spends some time in a truck with a ghostly apparition, is chased by a jealous boyfriend, visits the Alamo, becomes a bull rider, dances to “Tequila” in a motorcyclists’ bar, and gets to see his story made into a movie starring James Brolin. Any of these sequences would have made an enjoyable short. Cramming all of them into a single 90-minute chunk recalls Shakespeare’s admonishment about “too much of a good thing.”

Paul Reubens’ portrayal of Pee-wee was influential on future depictions of characters trapped in states of arrested adolescence. Some of Burton’s other movies offer protagonists with what could only be considered “Pee-wee-esque” tendencies. Many of Adam Sandler’s early films featured the star emphasizing the darker aspects of a Pee-wee character. And the titular figure in Napoleon Dynamite bears more than a passing resemblance. The problem is, of course, that none of these individuals is likable or relatable. In the final analysis, Pee-wee is less of a character and more of a two-dimensional catalog of quirks and idiosyncrasies. This is very much a live-action cartoon. 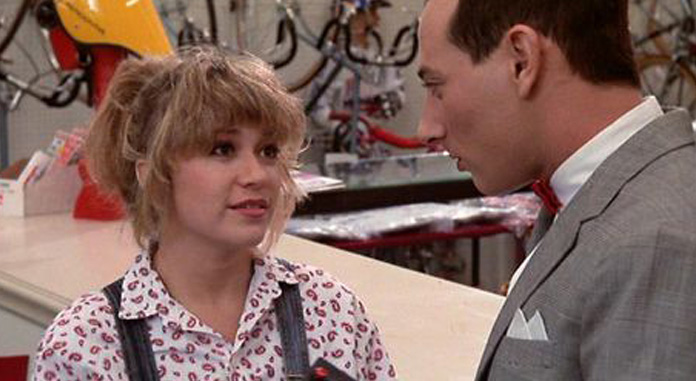 Pee-Wee’s Big Adventure enamored some contemporaneous critics because it was so different from the run-of-the-mill stuff Hollywood was pumping out during the mid-1980s. It took chances and, as is often the case with movies that don’t play by the rules, some things work and others don’t. Unevenness defines the film’s tone. The movie gets weirder and more divorced from anything resembling reality the longer it runs but that (I suppose) is part of its charm. You can’t predict where the film is going because it doesn’t play by any established rules. By the time James Brolin is playing a 007-spoofed Pee-wee, you simply have to go with the flow and not think too hard about the path leading to that destination.

Pee-wee Herman became something of a minor cultural phenomenon during the second half of the 1980s due in part to the success of Pee-Wee’s Big Adventure and the positive reception of the follow-up TV series, which ran from 1986 until 1991. A motion picture sequel, Big Top Pee-Wee, was released in 1988 to tepid reviews that matched a largely disinterested public response. Pee-wee disappeared following Reubens’ indecency arrest and, although there have been on-again/off-again discussions about resurrecting the character in another film (which would be adult-oriented, given that aspects of the character now seem more creepy than child-like), nothing has moved forward. Pee-wee lovers will have to make due with what’s currently available and those who believe that a little Pee-wee goes a long way don’t have to worry about coping with more. As for Pee-Wee’s Big Adventure, like all cult classics, it works best if you have a vested interest. Unevenly paced and narratively scattershot, it offers moments of entertainment but lacks cohesion and consistency.