It’s very difficult to kill a slasher film franchise. The existence of Spiral is proof that, no matter how many times you put down a series like this, it keeps coming back for more. The original Saw reached theaters in 2004 and, as I wrote in the review, “While most of the film relies more on psychological tension and terror, there's plenty of gut-churning, visceral violence...” As the series wore on, the so-called “torture porn” elements took precedence over storytelling. The original run contained seven parts, with an installment released annually until 2010. After a seven-year break, Saw returned with Jigsaw, which disappointed at the box office. Fast-forward four years to Spiral. It may not feature the original psycho mastermind, but, as The Who once noted, “Meet the new boss, same as the old boss.”

Expectations might have been raised somewhat by the news that Spiral would star A-listers Chris Rock and Samuel L. Jackson. Previously, the highest profile actors to appear in any of the Saw entries were Cary Elwes and Danny Glover. Unfortunately, the inclusion of well-known names merely makes the film’s regurgitation of past failures all the more disappointing. Although Spiral pretends to mine the trope of one good cop investigating department corruption, that’s really just an excuse to present long, lovingly-filmed instances of sadism and torture. The director, Darren Lynn Bousman, has ample experience in this arena, having previously overseen Saw II, III, and IV. 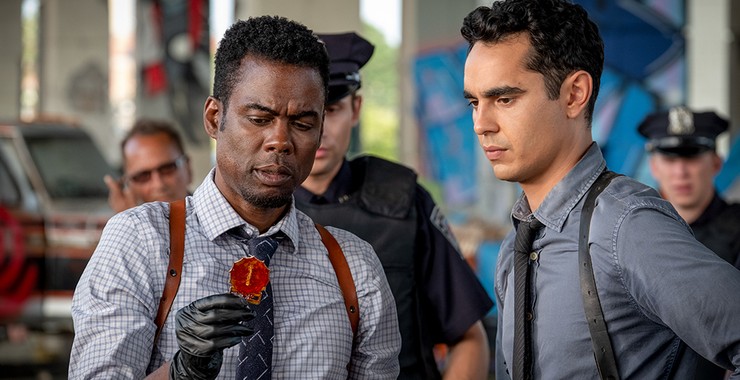 For those who are wondering, Tobin Bell doesn’t make an appearance, although “Jigsaw” is name-checked a couple of times and a photograph is flashed in front of the camera. Spiral wants to move away from the characters of the Saw films without losing the gore or the “gamesmanship” that provided their unique slasher-film calling card. The movie features its share of these intricately constructed sequences in which a character must face the Hobson’s choice of committing some hideously painful act of self-mutilation or dying. One of these games features the ripping out of a tongue to escape an oncoming train. Another offers paralysis as an alternative to being scalded to death by hot wax. It’s that kind of film. In the original Saw, there was enough humanity to the characters for the viewer to be be shocked by what was being offered. Here, the characters are all two-dimensional and their demises stir nothing in the way of sadness or pity. There’s no suspense about the choices. None of the deaths are especially inventive but they are gory, and that’s all that has mattered in any Saw movie for about 16 years.

Rock plays Detective Zeke Banks, who may be the only straight cop working in a department of crooks. He’s the son of the revered former Captain Marcus Banks (Jackson), who always seems to be lurking around the periphery (presumably because he’s either the killer or is being set up as a red herring) despite having retired. His hand-picked protégé, Captain Angie Garza (Marisol Nichols), is tired of cutting Zeke slack because of his father’s identity and saddles him with the one thing he doesn’t want: a partner. The new guy, William Schenk (Max Minghella), is fresh out of school and eager to please. This mismatched pair soon finds themselves on the trail of a Jigsaw copycat killer who is targeting cops. And, as each of his brothers in blue die, Zeke senses a tightening noose. 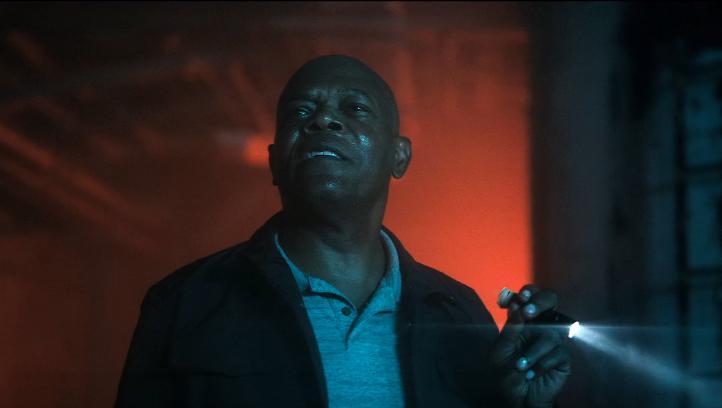 It will be interesting to see whether the promise of copious gore is sufficient to lure viewers into theaters during the early days of the post-pandemic era or whether audiences will offer Spiral the same degree of disdain they rightfully showed for Jigsaw. If Saw ever had its day, the sun has long since set on it. There seems to be little point in exhuming it for a new generation.