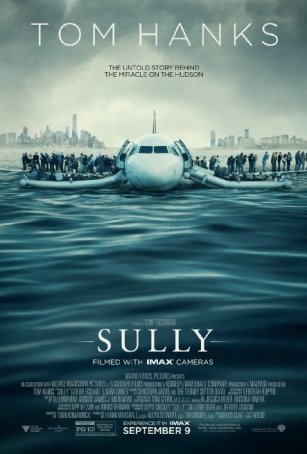 Most of those who elect to see Sully, Clint Eastwood’s re-enactment of the 2009 ditching of a commercial airliner in the Hudson River, will remember the incident involving U.S. Airways Flight 1549 from news reports. For several days following the January 15 incident, this was the top story on all the nightly newscasts and provided food for the insatiable appetites of 24-hour news channels. As with all news stories, major and minor, this one faded from the American consciousness. However, since the story is so well-known, one might reasonably ask whether there’s enough material to warrant a feature film. As Sully argues, the answer is “yes,” although just barely. With a skinny running length just clearing the 90-minute bar, the movie is forced to shoehorn in some extraneous material to keep it afloat. Nevertheless, on balance, the numerous strengths are more than enough to compensate for any weaknesses and, although not an Oscar-worthy endeavor, Sully proves to be by turns engaging, exhilarating, and nail-biting.

Rather than presenting events of early 2009 in a chronological fashion, director Eastwood employs a somewhat tortured narrative that relies heavily on layered flashbacks. Although not confusing to follow, it seems needlessly cumbersome and adds little to the progression of events. Eastwood wisely keeps the movie’s focus on a meticulous recreation of the accident/ditching/rescue and the subsequent NTSB investigation. For the former, Sully is exacting in its use of existing documentation and footage. For the latter, a degree of “dramatic license” is employed to make things more cinematic. Attempts to portray the protagonist’s PTSD and flesh out his relationship with his wife don’t work as well as they might have. 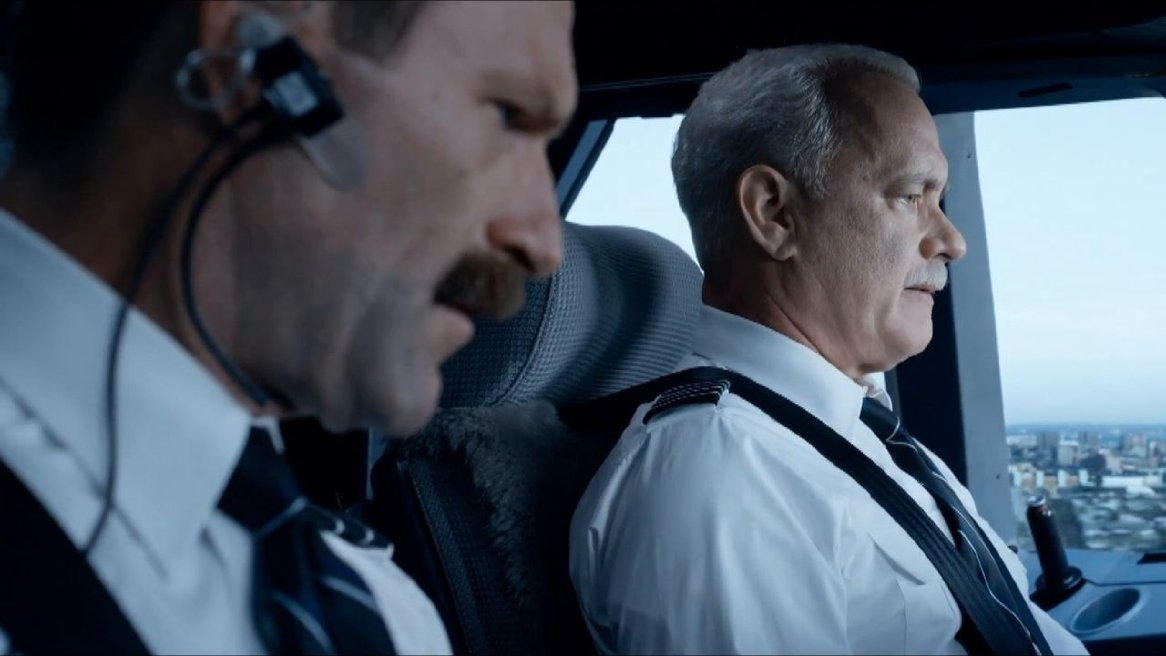 The dramatization of the flight is Sully’s most compelling slice of filmmaking. Knowing what happens ahead of time doesn’t reduce the tension. A veteran director like Eastwood understands how to use audience expectations to the movie’s benefit. Anticipation lends an edge to the routine pre-takeoff checks performed by Captain Chesley Sullenberger (Tom Hanks) and co-pilot Jeff Skiles (Aaron Eckhart) at LaGuardia Airport. The plane is airborne for only about six minutes before Sully brings it down for a near-perfect water landing in the Hudson after a bird strikes knocks out both engines and his experience as a pilot informs him that he probably can’t make it to any of several nearby airports for a conventional emergency landing.

For the most part, the NTSB is presented as antagonistic; several officials view Sully’s decisions with skepticism. The production’s portrayal of the investigation airbrushes things. For example, in the movie, it’s implied that the simulator pilots were able to land the plan with 100% accuracy. In reality, they only succeeded about half the time. Nevertheless, it’s fascinating to get a peek behind the curtain at some of what goes into an accident investigation. 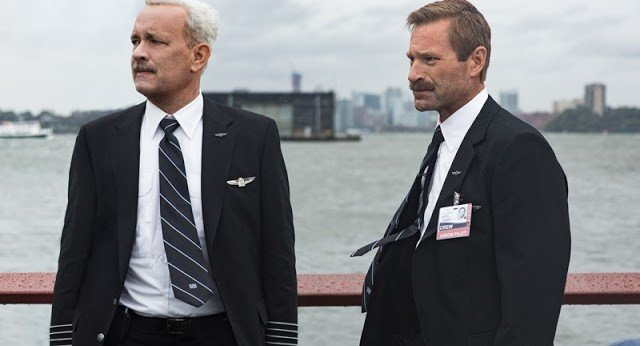 Actor Tom Hanks portrays Sully as a sensible, serious, salt-of-the-Earth type whose dedication and knowledge allow him to function admirably under pressure, saving 155 lives in the process. Although this isn’t likely to go down as one of Hanks’ great roles (and his physical resemblance to the real-life Sullenberger is only passable), it’s a solid performance. Hanks’ innate appeal causes us to immediately like and believe in Sully, and that’s all the movie needs. Aaron Eckhart plays Sully’s co-pilot, the only other person with meaningful screen time. Laura Linney is Lorraine Sullenberger but the only time we see her is when she’s on the phone with her husband.

Eastwood and cinematographer Tom Stern elected to shoot Sully almost entirely using digital IMAX cameras - a decision that enhances the immersion factor for those seeing the movie on large format screens. Sullenberger’s behind-the-scenes involvement in the production gives Sully a strong window into the captain’s psyche and provides a rare upbeat story from a grim, turbulent decade - an almost old-fashioned tale of heroism. It’s a good bridge from the noise of summer to the more sedate films of fall.