Thematically, James Ponsoldt’s The Circle (based on the novel by Dave Eggers) takes its cues from George Orwell’s 1984 and Aldous Huxley’s Brave New World. Grand aspirations, to be sure, and ones that are never truly met. From its beginning, the movie has difficulty wedding its collage of ideas with a compelling narrative. The end result is a meandering story featuring shallow, unconvincing characters attempting to illustrate the evils of technology in its undermining of individual liberties. The Circle offers a lot of good bullet arguments but this is a movie not a Powerpoint presentation.

Many of the movie’s ruminations focus on the yin and yang of technology to “improve” the everyday experience of living. What some view as beneficial, however, others see as intrusive. The Circle attempts to present both sides but the dice are loaded. Frustratingly, the movie never delves beneath surface arguments so there’s little here we haven’t heard or seen before. Yes, omnipresent cameras can aid law enforcement officers. Yes, constant surveillance can make us “safer” from crime. Yes, detailed medical information might make treatment more effective. But there’s a price for all this. When Big Brother is watching, what happens to privacy? Can a person stay sane if his/her every movement is scrutinized? Unfortunately, although The Circle touches on these issues, it never scratches any itch long enough to satisfy. Instead, it moves on, making a compelling argument that this would have been better as a long-form limited TV series than a less-than-two hour motion picture. 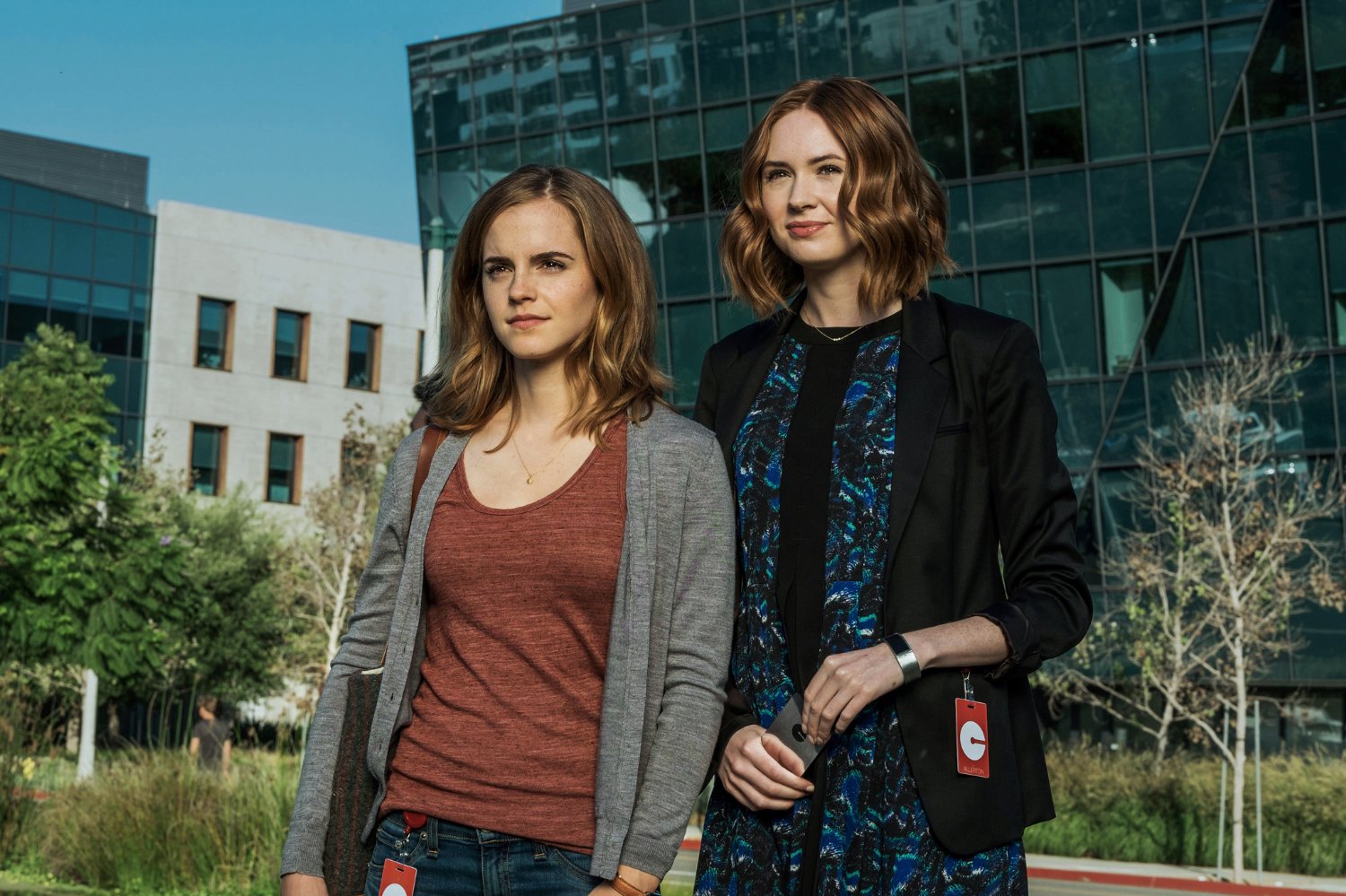 In the late 1990s, two movies explored the growing fascination people at the time had with a new wave of online voyeurism – watching exhibitionists display chunks of their lives to a worldwide audience. Since then, the practice has grown more prevalent and what we considered extreme has become commonplace. Nevertheless, The Circle owes a debt to both Peter Weir’s The Truman Show and Ron Howard’s EDtv in the way it offers up the possibility of watching the life of a subject 24/7. Ponsoldt’s depiction of this is more in keeping with how things are in 2017, folding in a strong social media aspect, but the issues remain the same: Can a person thrive under a microscope when privacy is limited to bathroom breaks and the lines between reality and performance have become blurred. Once again, however, The Circle is content to present the points without digging deeper.

The movie gets its title from the name of the mega tech corporation where most of the action takes place. The Circle has been modeled after Google with a little Apple thrown in for dessert. Working at The Circle is a dream job for Mae (Emma Watson) so when her friend Annie (Karen Gillan) promises to get her an interview, she’s thrilled. Soon, she’s learning the ropes in Customer Experience, where a 100% result on satisfaction surveys is all that matters. Mae loves the whole Circle experience – the living arrangements, the open-floor work space, the health benefits, and the atmosphere of positive reinforcement. Presiding over it all is CEO Eamon Bailey (Tom Hanks), a Steve Jobs clone who gathers his troops weekly to give them combination pep talks/product updates.

The Circle’s latest brainchild is SeeChange - inexpensive, portable cameras about the size of a quarter that can provide sophisticated streaming video with minimal effort. Bailey envisions them being everywhere, increasing “transparency” and enhancing safety. Privacy issues are a secondary concern and those drawbacks are almost never mentioned at The Circle. If Mae is uncomfortable about this aspect of her workplace, she doesn’t show it and her enthusiasm for the project makes her the perfect spokesperson. She agrees to allow herself to be on camera 24/7 and becomes an immediate social media sensation. But fame of this sort has its price, as she soon learns.

Narratively, the film is uneven, often rushed. Several “big” scenes (like the one in which Mae’s ex-boyfriend makes a run for it while being pursued by camera-toting people and drones) feel forced and artificial. The best moments in The Circle are the cerebral ones: Bailey’s pep talks and the inner circle’s brainstorming sessions. Mae’s on-line odyssey – from obscurity to fame to desirous of a moment’s solitude – might have been more interesting if it had been given time to develop. 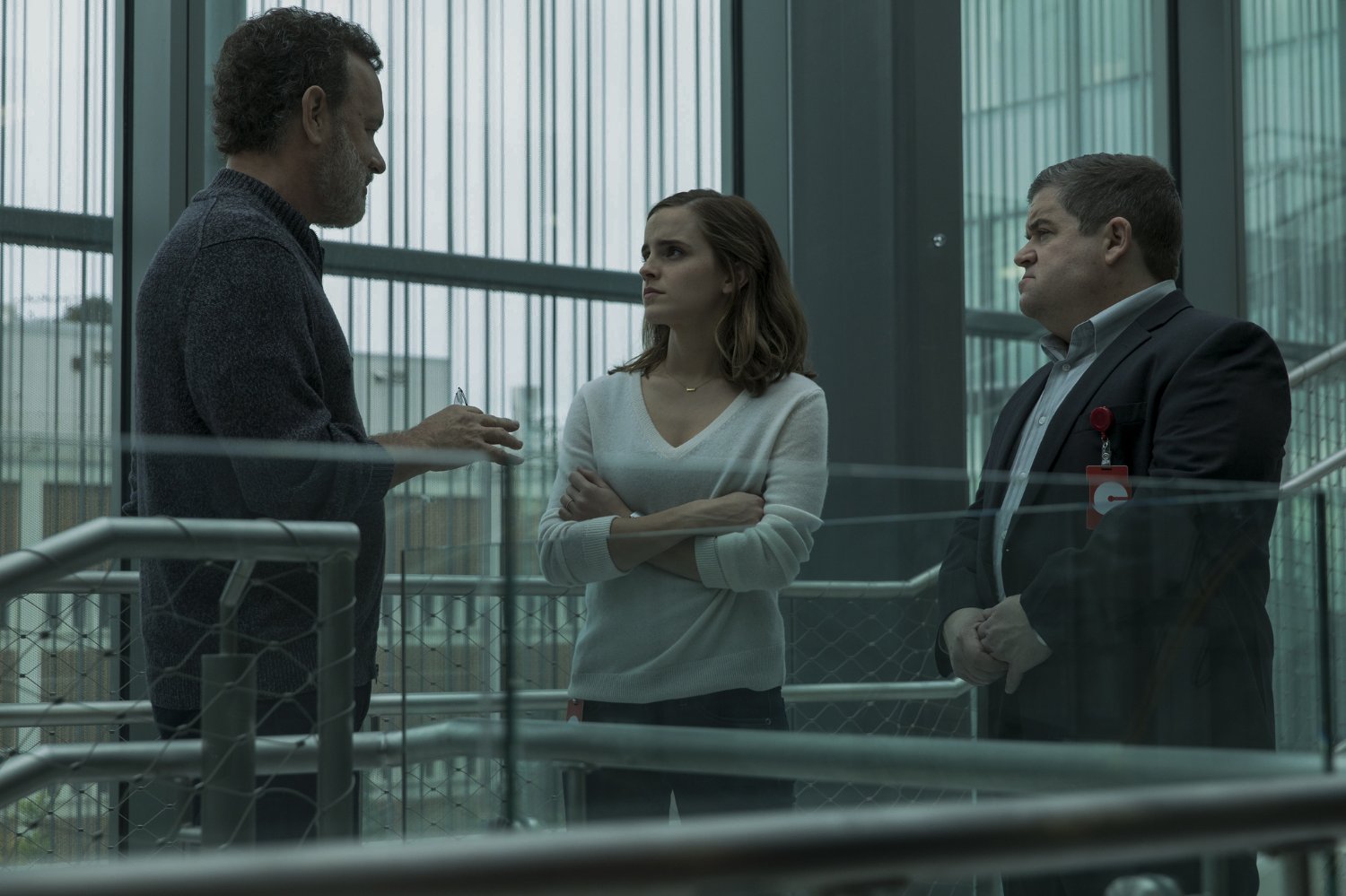 The character of Mae is the movie’s most glaring flaw. She’s reactive, inconsistent, and not interesting. Part of the problem may be Emma Watson’s one-note performance but she’s not given smart dialogue or a credible story arc. She’s simply there – someone who provides a convenient portal into The Circle. The screenplay radically alters the book’s ending, rendering moot some of the points it tries to make in its quest for an audience-pleasing denouement. Never has producer interference been more evident. But it’s hard to absolve Eggers of blame for the wholesale mangling of his novel since his name is on the screenplay.

Tom Hanks brings some laid-back energy to his role and makes us wish the movie had been about Bailey rather than Mae. This is, however, a supporting role for the veteran actor and, although one would technically categorize his character as a “villain”, Hanks succeeds in making Bailey likeable. He’s the kind of boss we’d all like to have. Sadly wasted are the talents of John Boyega (playing a semi-retired genius who no longer trusts The Circle) and Bill Paxton in his final performance (as Mae’s MS-stricken father).

The reworking of the original storyline gives The Circle a schizophrenic feel. In the end, it’s difficult to decode what the precise message is beyond the rather boring refrain of “loss of freedom is the price we pay for greater connectivity.” Is the movie pro-tech or anti-tech or tech neutral? Damned if I know. I suspect the filmmakers aren’t sure, either. The cop-out ending is awkward but that comment can be made about far too much of a film that could have and should have been more thought-provoking and less obvious in its observations.