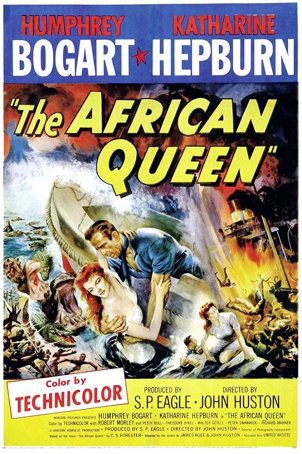 Over the course of a 26 year career that encompassed more than 75 movies, Humphrey Bogart made only five color films. The first and most respected of those was 1951’s The African Queen, the last of five pictures he made with his good friend, director John Huston. The African Queen also represented the only time Bogart was paired with Hollywood legend Katharine Hepburn. For Bogart, The African Queen capped his career. Not only did he give what he believed to be his best performance, but the Academy honored him with a Best Actor statuette to go along with it. (Of the production’s four nominations, Bogart was the only one to come out on top with some people believing it to be a “lifetime achievement award” like Al Pacino’s for Scent of a Woman.) Although Bogart would go on to make ten more films after The African Queen, only The Caine Mutiny, Sabrina, and The Barefoot Contessa are well remembered. 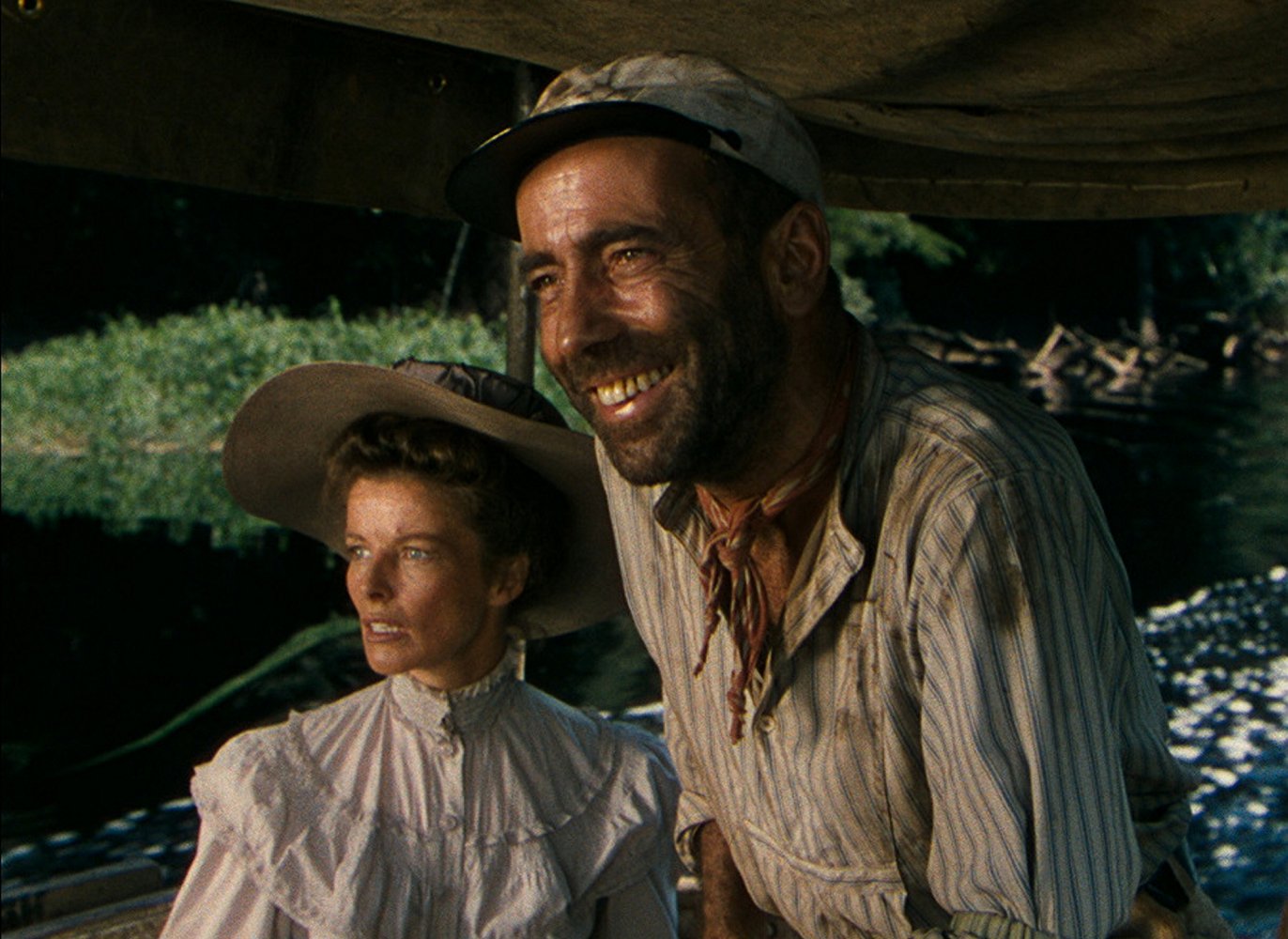 While The African Queen was financially successful in its day (being the 12th most-seen film of 1952), it has withstood the passage of time without losing its mystique. Most people with a knowledge of film history know of the movie even if they haven’t seen it. Few Bogart fans would put it on a Best Five list of the actor’s titles but most would place it on a Top Ten. Even though it has in many ways not aged well, it is well worth seeing and the restored Technicolor print allows it to look as crisp and clean as if it was filmed yesterday. Those with an aversion to black-and-white may find The African Queen more aesthetically appealing than Bogart’s greatest titles.

The African Queen used a script written by James Agee (subsequently partially reworked by director Huston) based on the novel by C.S. Forester. The film changed many of the book’s details to make things more cinematic (and, in at least one case, more practical). One alteration is the ending, which is different in the movie than the printed version. Forester admitted to being dissatisfied with how the novel ends but seemed satisfied with how things go in the film. 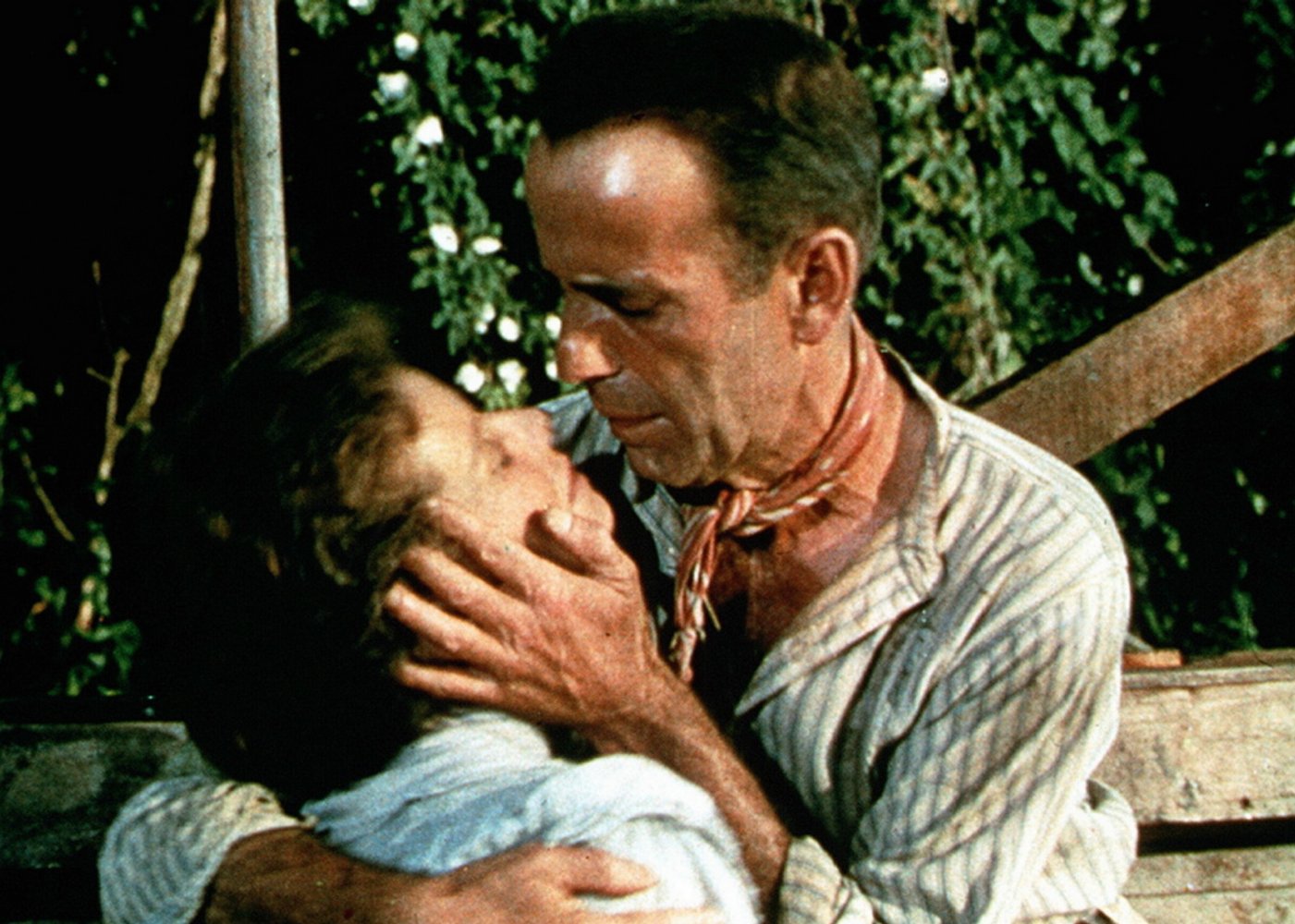 Although not based on any one specific real-life event, The African Queen found its loose inspiration in several World War One-era incidents. The story is set in the village of Kungdu in East German Africa. Hostilities between Germany and the Allies have just broken out and the ripples are felt across Europe and into Africa. Methodist missionaries Samuel Sayer (Robert Morley) and his sister, Rose (Katharine Hepburn), are treated roughly by German soldiers who come to conscript the locals. Samuel is beaten, goes into a delirium, and dies. At that time, Charlie Allnut (Humphrey Bogart) arrives on his tramp steamer The African Queen. He helps Rose bury her brother then offers her a means of escape. They depart Kungdu on the small vessel.

Rose isn’t merely interested in finding her way home, however. She wants to turn The African Queen into a torpedo and sink the German gunboat Queen Luise, which patrols a lake downstream. Reaching the Queen Luise requires surviving a trip down the Ulanga River, which presents numerous obstacles: three series of rapids (one of which is essentially a waterfall), a German fort, and an area of muddy islets where navigation becomes difficult. At first, Charlie is against what he deems to be a suicide mission but Rose uses her strong personality to wear him down and he eventually agrees, resigning himself to a death sentence. The journey, with Charlie and Rose confined together for a long period on a small craft, results in a romantic relationship and, by the time The African Queen reaches its conclusion, they are a couple.

Seen today, The African Queen works better as a romance than an adventure. It’s not that the “action” sequences are poorly executed – in fact, considering the limitations of 1950s filmmaking, they are adept – but none raises the pulse more than a little. The second and third rapids represent the most suspenseful sequences but passing the fort and some of the late-movie events aren’t all that exciting. But the relationship between Bogart’s Charlie and Hepburn’s Rose is shown to grow in a credible and sometimes playful fashion. Some of this is due to the star power of the leads but there is genuine chemistry and we quickly become invested in their romance.

Today, it’s questionable whether this sort of mature, low-key love affair could ever make it to the screen. At the time of filming, Bogart was 51 years old and beginning to lose his good looks. Hepburn was 44. It’s difficult, bordering on impossible, to remember the last time any kind of mainstream romantic movie (adventure, comedy, drama, etc.) was made with middle-age actors. Today, screen love is the purview of the young. For that reason alone, it’s refreshing to enjoy this courtship. Despite the seriousness of the overarching story, there’s plenty of light comedy and geniality in the Bogart/Hepburn interactions.

Many of the problems associated with The African Queen would not have been issues upon its release. The special effects – mostly background projections intended to make studio-bound scenes look like location shots – are primitive and unconvincing. (A lot of The African Queen was shot in the wilds so these incidents are more the exception than the rule.) The film lacks the intensity that would come with future “Hearts of Darkness” titles like Apocalypse Now and several of Werner Herzog’s movies. And there are some unfortunate stereotypes of Germans (not well-liked worldwide in 1951) and African natives. In the 1950s, these would have been viewed as legitimate characterizations. Today, they seem closer to caricatures. 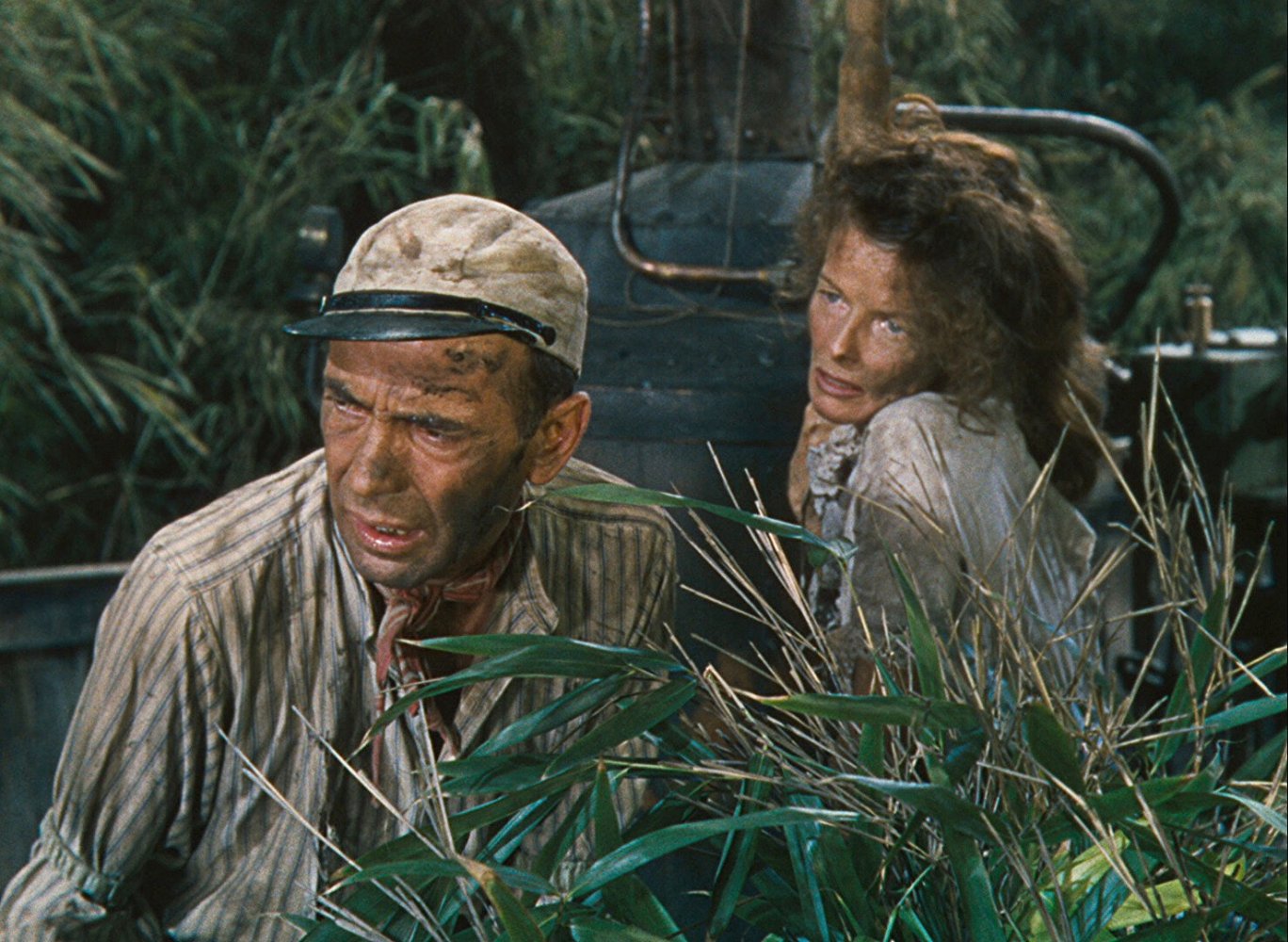 The African Queen gained notoriety because of stories that emerged about its difficult production. Although by no means unique to this far-from-civilization title, it was one of the earliest of its kind. (The stories are nowhere near as harrowing as those related to Apocalypse Now.) Nearly everyone in the cast and crew came down with dysentery and/or malaria with the exceptions of Huston and Bogart, who apparently subsisted on canned foods and alcohol. The teetotaling Hepburn was hit especially hard. Despite not being ill and having his young wife with him – Lauren Bacall accompanied the crew and eventually became a nurse to the many sick – Bogart came to hate the jungle and, when a few additional days of shooting were required, he nearly mutinied. Hepburn’s 1987 book, The Making of the African Queen: Or How I Went to Africa with Bogart, Bacall and Huston and Almost Lost My Mind, is an interesting an amusing and informative read about the behind-the-scenes stories.

Ten years ago, The African Queen was among the most difficult-to-find Bogart classics. The U.S. rights holder, Paramount Pictures, had not released the film on DVD. Older, grainy copies existed on VHS and laserdisc but the only Region 1 DVDs available were ugly overseas pressings that had Chinese subtitles. That changed in 2009 when Paramount completed work on a digital restoration of the film. DVD and Blu-Ray copies were released in March 2010. Now, thanks to a long-term contract with Netflix, The African Queen is available for streaming. In less than a decade, it has gone from being the most obscure of Bogart’s major films to the most easily accessible.

The African Queen is rightfully a classic even though some aspects of the production have not aged well. Bogart and Hepburn’s interaction is as good today as it was 65 years ago and this is one of Bogart’s best acting performances. It shows his range – although having normally played an “alpha” character, here he is easily manipulated by the strong-willed Rose. The on-location filming lends a sense of verisimilitude to many scenes (excepting, as noted above, those that weren’t filmed in Africa). The African Queen’s easy availability makes it an ideal choice for viewing for anyone who is curious about why Bogart is viewed by many as the greatest male movie star of all-time.