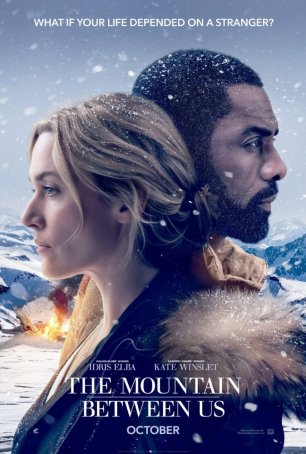 It’s hard to imagine a more generic wilderness adventure-turned-romance than Hany Abu-Assad’s The Mountain Between Us. Saved from the cinematic purgatory of direct-to-video by the screen presence of Idris Elba and Kate Winslet and some spectacular cinematography, the movie fails to excite as a tale of survival or ignite as a love story. The ending – a fifteen-minute anticlimax – flops around like a dying fish on dry land. It’s as if the filmmakers didn’t realize their story was over and started telling another one. The last scene is unforgivably cheesy in a non-self-aware fashion. And don’t get me started on the dog… 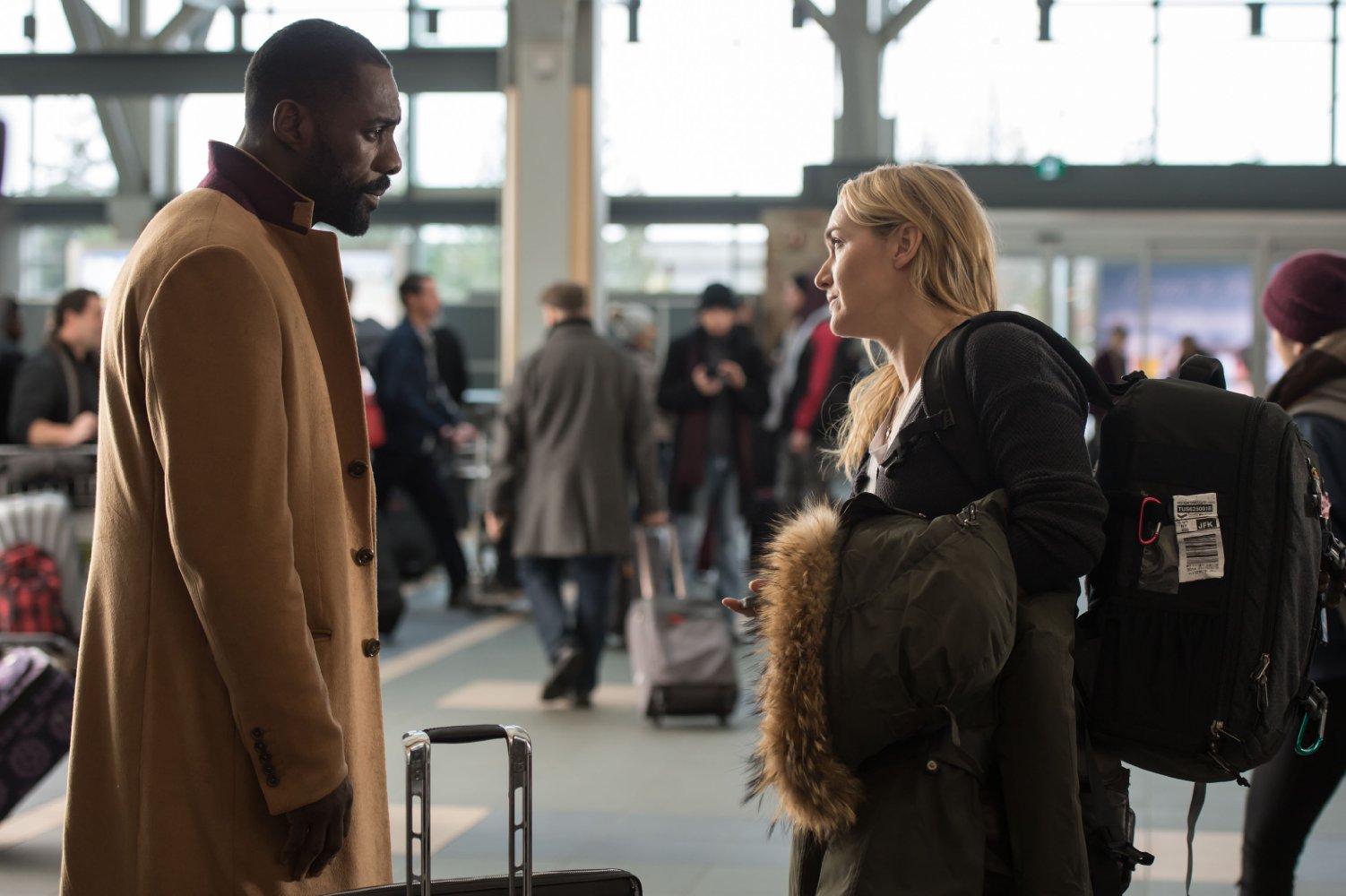 The survival aspects of The Mountain Between Us are adequate. There’s nothing special about them but they are well filmed. The cast and crew went to actual mountains with actual snow and cold air and subjected themselves to the elements. Kate Winslet has been through worse, having soldiered under James Cameron in Titanic, but this may have given her flashbacks. The storyline is a stitched-together patchwork of stranded clichés (think of it like Robinson Crusoe in the snow) with several all-too-convenient cheats like a cougar with enough meat to feed two people and one dog for 10 days and a cabin in the middle of nowhere.

The Mountain Between Us starts in an airport with travelers stranded due to an incoming storm and canceled flights. Two people – neurosurgeon Ben Bass (Idris Elba) and journalist Alex Martin (Kate Winslet) – desperately need to get out of Dodge. He has surgery the next morning and her wedding is less than 24 hours away. When Alex manages to charter a flight, she invites Ben to join her. With the jovial pilot (Beau Bridges) and his dog in the cockpit, everything seems to be going well until the storm makes an unexpected turn and the pilot suffers a stroke and dies. The result is a crash on a mountain in the middle of nowhere. Both humans are injured – Ben has broken ribs and Alex has a fractured leg – but the dog appears completely healthy. The next hour features Ben and Alex braving the elements when, after realizing a rescue is unlikely, they recognize that survival depends on them finding civilization. As they solider on, they fall for one another. 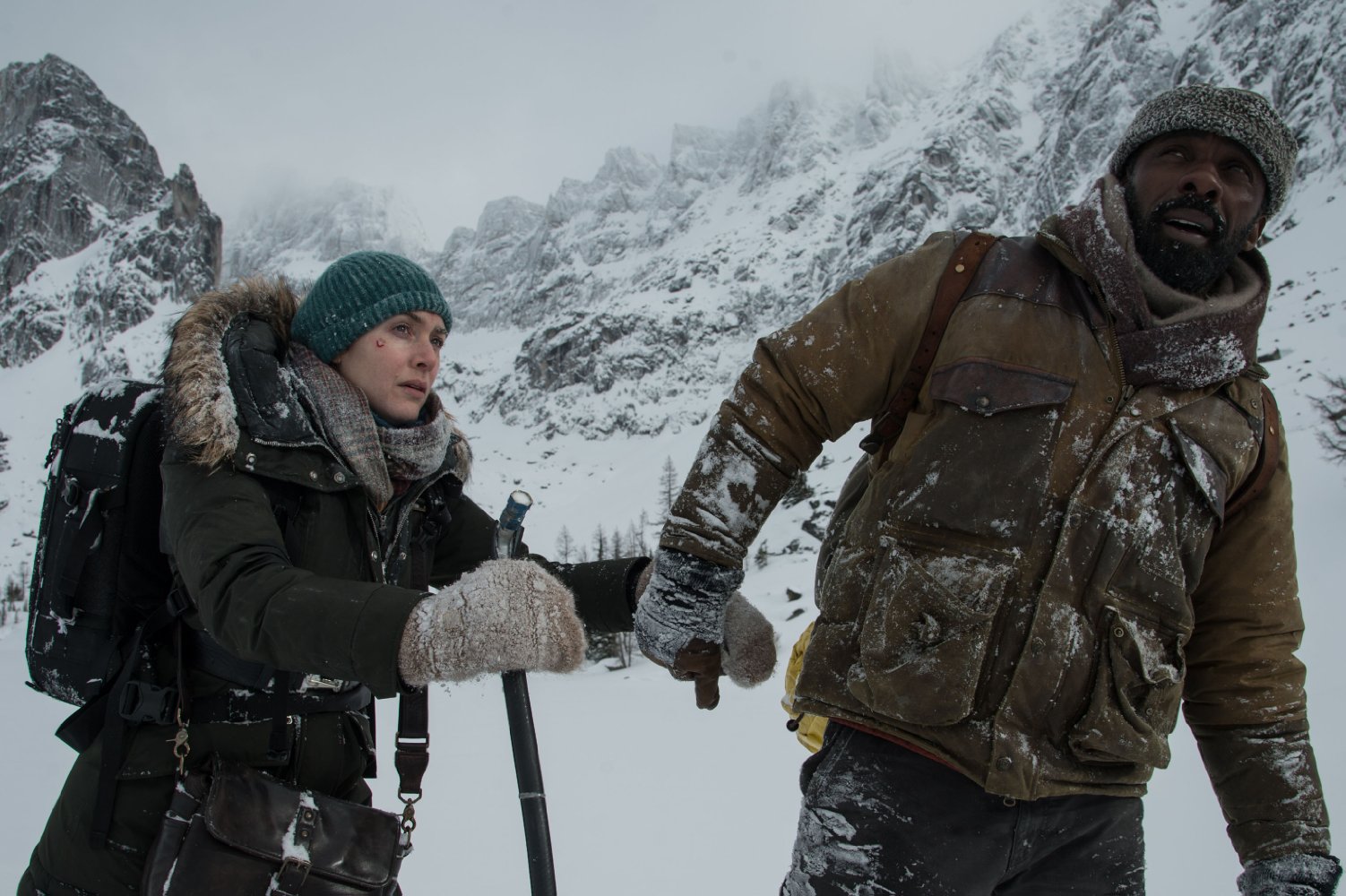 Winslet and Elba are magnetic actors and neither sleepwalks through their part. To the extent that The Mountain Between Us works, it’s because the actors sell their struggles. Unfortunately, the storyline is so predictable and obvious that it’s difficult to become involved. For example, there’s one scene halfway through the movie when Ben loses his footing and tumbles toward a sheer drop of several hundred feet. But we’re never worried because, hey, it wouldn’t be much of a movie if he died at this moment. And the romance is as inevitable as breathing. Generally speaking, the last thing men and women in survival situations worry about is having sex but why inject an element of reality into this fantasy?

Maybe the dog is in the book. The Mountain Between Us is based on a novel by Charles Martin. I haven’t read it so I don’t know. But the dog serves no purpose beyond the obvious audience-friendly one. Sometimes viewers get more worked up by canines in peril than humans. It feels like someone read the script and said, “You know what would make this even better – put a dog in it! That’ll really get audiences involved!” At best, the dog is a distraction. At worst, it creates major plot problems and elevates the suspension of disbelief bar. What’s more, excising the animal from the movie would have changed nothing.

Technically, the movie is top-notch, excepting the cheap-ish CGI used to create the cougar. Mandy Walker’s cinematography gives us a number of postcard-worthy shots and Ramin Djawadi’s score is effective without being intrusive. (Not surprising – this is the man responsible for the music of both Game of Thrones and Westworld.) Sadly, there are only so many holes that solid production values and charismatic performances can paper over, and the flaws in the narrative prove to be too much. The Mountain Between Us seeks to be a serious-minded story about people discovering hidden strengths in themselves and others when trapped in a desperate situation but ends up being old-fashioned cornball entertainment.