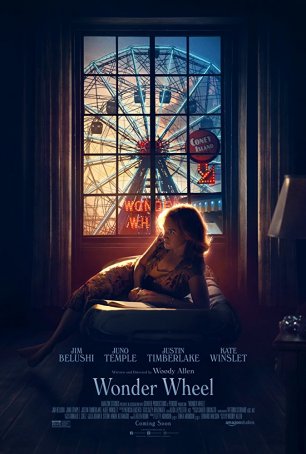 There was a time when the opening of a Woody Allen movie was considered (at least in serious cinema circles) as an event. Over the years, however, the quality of Allen’s output has diminished. Now, it’s at the point where a good Woody Allen movie is more the exception than the norm. Perhaps it’s time for the 82-year old director to start reducing the frequency of his offerings; churning out a picture every year may have taken its toll on the filmmaker’s creative juices. Wonder Wheel seems more like a cobbled-together afterthought than the romantic melodrama it seeks to be.

“Melodrama” doesn’t have to be a negative term. A well-made melodrama can provoke an emotional reaction. Wonder Wheel wants to be that kind of film but the dialogue is so overripe and the situations so trite that it never achieves its goals. As Allen movies go, this one is also strangely dour – the only obvious attempt at humor (and it’s a thin one) comes in some of Justin Timberlake’s narration. I can’t say Wonder Wheel is the worst movie Allen has made this century – that distinction probably still belongs to To Rome with Love – but it’s high on a growing list of lows. 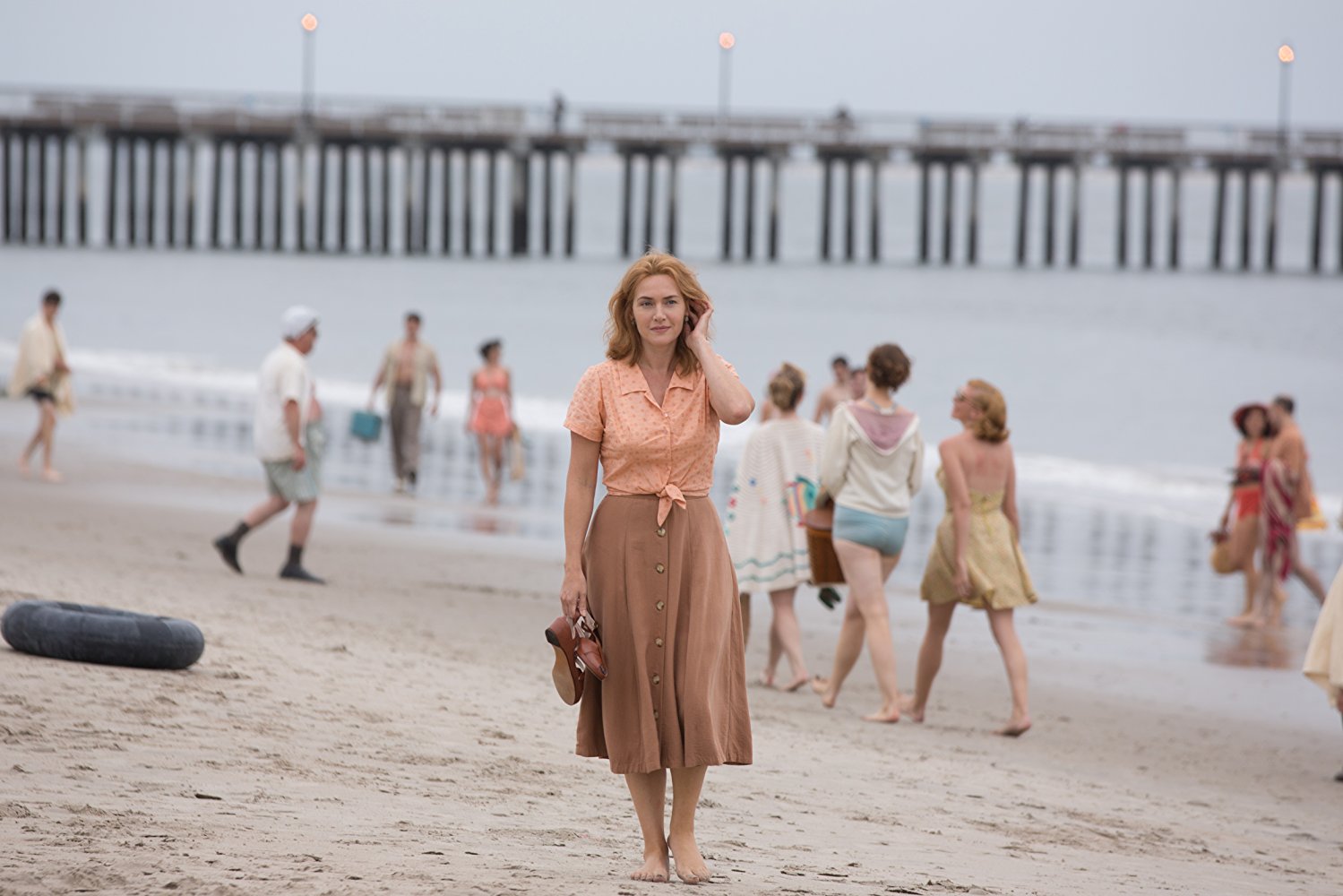 The film, with its gauzy images of Coney Island beaches (Vittorio Storaro’s cinematography is gorgeous), takes place sometime during the 1950s. Unhappily married Ginny (Kate Winslet) is in daily survival mode, working long hours as a waitress while trying to keep her alcoholic husband, dumpy Humpty (Jim Belushi), off the sauce and carrying on an affair with the much-younger, playwright-wannabe lifeguard Mickey (Justin Timberlake). Humpty is too oblivious to see what’s going on under his nose but the arrival of his estranged, 26-year old daughter, Carolina (Juno Temple), upsets the balance. Carolina is on the lam – a hit has been ordered on her by her mob-attached husband (she knows too much) and she ends up in Coney Island looking for a place to lie low. While doing so, she and Mickey form an attachment. When Ginny learns about this…well, hell hath no fury like a woman scorned. Especially one with persistent migraine headaches, a pyromaniac son, and a nasty temper.

Woody Allen films used to come in two flavors – clever comedies and serious introspections about some aspect of the human experience. Both were worthwhile on their own terms. Wonder Wheel falls into neither category and doesn’t work on any terms. Perhaps the biggest problem is the Kate Winslet character. Ginny is shrill and unappealing. Allen is fond of putting bits and pieces of himself into his movies and some of his less endearing characteristics emerge in Ginny. There are times when she speaks too obviously with Allen’s voice. Her story arc is cliched and, in the end, not worth the time invested in watching her. Maybe Allen was going for a Cat on a Hot Tin Roof dynamic but he’s already plundered Tennessee Williams (in Blue Jasmine) to better effect. 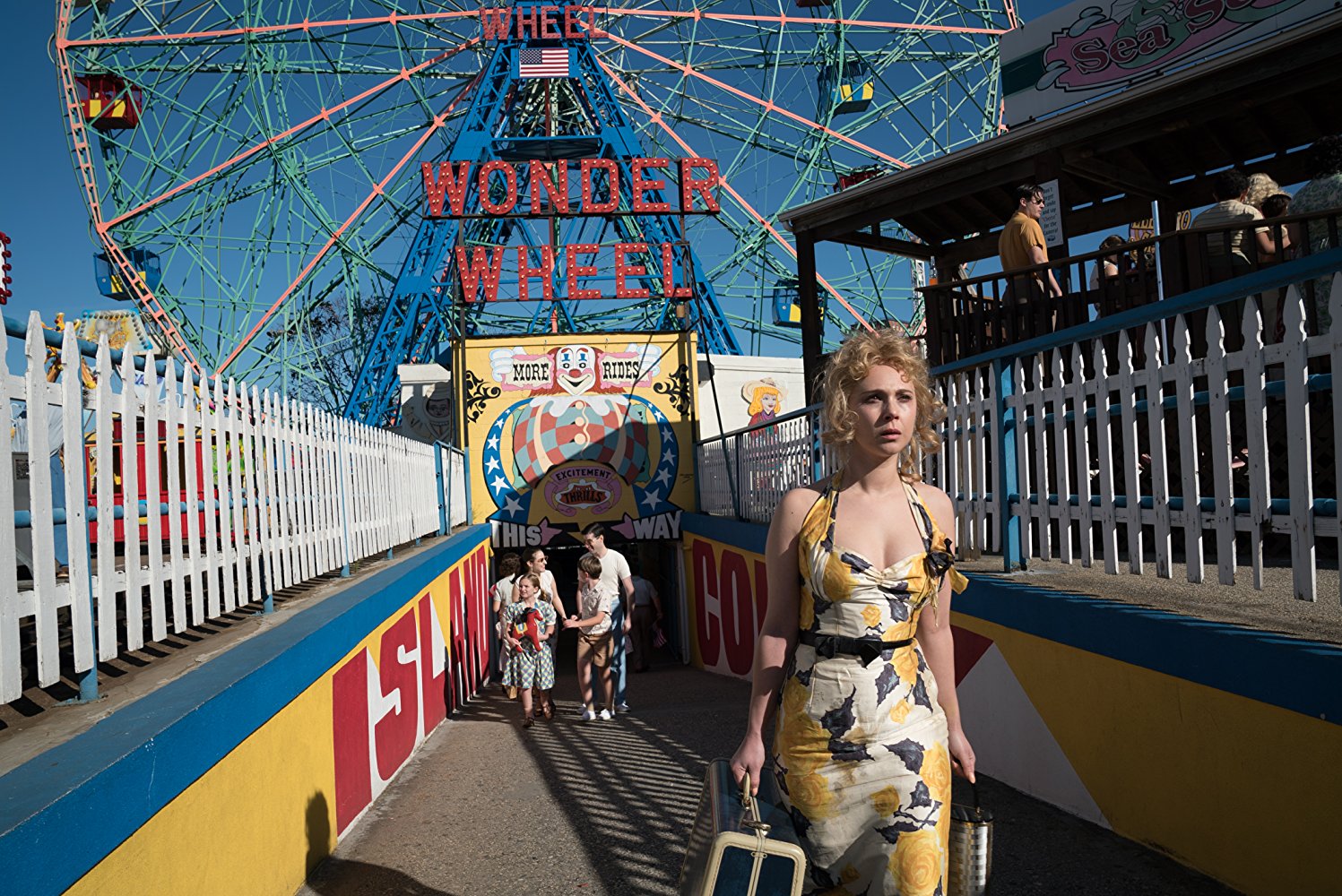 It's possible to argue that one of the reasons the characters and situations are so overcooked is because we’re seeing them through the eyes of Mickey, a narrator who fancies himself as an up-an-coming playwright with an affinity for Williams. Authors, especially those with more imagination than ability, often see everything as overly dramatic, so maybe that’s what Allen is trying to do. But “trying” doesn’t mean “succeeding.” Part of the problem may be Timberlake, who’s so clean-cut and square that he feels distanced from the story. This is less a reflection of the performance than a commentary on how the character is written, but Timberlake doesn’t rise about what Allen has put on the page. The only member of the small ensemble to do that is Juno Temple, whose performance as Carolina is appealingly guileless. One wishes the story focused more on her than the nails-on-a-blackboard unbearable Ginny.

With many of Allen’s recent movies, it has been fair to classify them as being for “completists” only. Even that caveat may not be a strong enough warning against Wonder Wheel. The movie has a 101-minute running length but seems much longer and watch-checkers can be forgiven wondering if their timepieces are broken. Perhaps the “Wonder” in Wonder Wheel is that anyone agreed to produce something so tired, joyless, and uninspired.