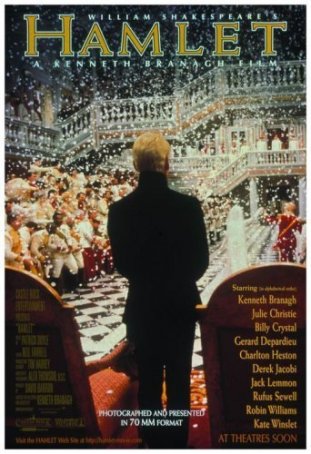 "Presenting the play uncut has allowed the characters to reveal even more, and we discover extra details about them which are usually lost on stage. The political situation becomes clearer, and Hamlet is revealed as a knowledgeable man of the theater in his discussion of the boy actors. We can convey a stronger sense of Denmark as a country ill at ease with itself, where there is indeed something rotten and disjointed. The restored lines are not mere padding, but reinforce the idea that the play is about a national as well as domestic tragedy."
-- Kenneth Branagh

The play, Hamlet, by William Shakespeare, was first performed around 1600. Since then, it has proven to be one of the English language's most enduring stories, and there has never been a decade that hasn't seen dozens of new productions. Hamlet has come to the screen numerous times, in incarnations varying from early, silent versions to grand, color epics. Legendary actors John Gielgud, Richard Burton, and Laurence Olivier have taken the lead role. Now, as the curtain falls on the 1996 movie season, another Hamlet has opened. And, in a statement that I do not make lightly, this latest version is not only the best filmed adaptation of Hamlet I have ever seen, but the best cinematic expression that I have come across of any of Shakespeare's plays.

Hamlet has been something of a private obsession for Kenneth Branagh since, at the age of eleven, he first saw it on British TV. Even when Henry V was an international sensation, he was adamant that his true dream was to bring an unabridged version of Hamlet to the screen. Now, half a decade later, after directing Henry V and Much Ado About Nothing and co-starring in Othello, that vision has been realized. Branagh's Hamlet, filmed in 70 mm, has arrived in all its glory, and, with every line from the original play intact, it takes approximately four hours to run. It is a well-spent four hours.

Part of the enduring appeal of Hamlet lies in its complex characterization and twisty, tragic plot. Hamlet deals with, among other things, madness and revenge, sex and love, politics and treachery, and ghosts, both real and figurative. Yet, despite the depth and weight of the issues it essays, there is still a great deal of humor and good, old-fashioned adventure. Hamlet can quite literally make you laugh and cry, hiss and cheer. It also contains a slew of famous lines, including, but not limited to the likes of "Frailty, thy name is woman!", "To thine own self be true", "Something is rotten in the state of Denmark", "Brevity is the soul of wit", "The play's the thing", "The lady doeth protest too much", and, of course, "To be, or not to be, that is the question."

The story centers on Hamlet (Branagh), a thirty-year old Prince of Denmark during the twelfth century, who is mourning the death of his beloved father (Brian Blessed) and the untimely (and, according to custom, unseemly) wedding of his mother, Gertrude (Julie Christie), to his uncle, Claudius (Derek Jacobi). Hamlet sees his mother's sudden re-marriage as a betrayal of her union with his father, but worse news is yet to come. An apparition, appearing in the shape of Hamlet's father, haunts Elsinore Castle, and when Hamlet confronts the ghost, it claims to be the true spirit of the late king, doomed to walk the Earth for a set time. It also states that, by using a fast-acting, deadly poison, Claudius committed murder to claim both queen and crown for himself. Hamlet vows revenge, and thus begins either his slow spiral into madness or his carefully orchestrated act to appear insane.

The peripheral issues of Hamlet are no less interesting. Fortinbras (Rufus Sewell), the nephew of the King of Norway, is massing armies to attack Denmark. Ophelia (Kate Winslet), Hamlet's lover, has been forbidden to have any further contact with the prince. A group of traveling actors has come to Elsinore. And two old school mates of Hamlet's have been employed by Claudius to betray their old friend.

One of the things that Branagh brings to his adaptation of the play is an amazing visual sense. From start to finish, this is a stunningly beautiful film, filled with vibrant colors, startling camera angles, and costumes and production values that are among the best of the year. Even if the story was weak (which it isn't), Hamlet would be worth seeing for its pure visual splendor. And, although the dress and settings are those of late-nineteenth century England, no part of the film seems anachronistic. Cinematically time-shifting Shakespeare's plays has become popular of late (see Ian McKellan's Richard III or the recent Romeo and Juliet), but Branagh has surpassed everyone. With an unflagging attention to detail, Hamlet demands to be noticed.

Yet, even amidst the spectacle of the visual elements, the narrative is not upstaged. A key to great cinema is to use time and place to augment the story, and that's what Branagh accomplishes here. We are not so enraptured by the stunning appearance of Elsinore's terraced throne room that we lose sight of Hamlet's pain, Gertrude's uncertainty, Polonius' foolishness, or Claudius' guilt. From the wintry snowscapes surrounding the castle to the desolation of a graveyard, the settings emphasize, but never overwhelm, the action.

For his version of Hamlet, Branagh has assembled a top-notch international cast. Well-known actors like Charlton Heston (as the Player King), John Gielgud (Priam), Judi Dench(Hecuba), Billy Crystal (First Gravedigger), Gerard Depardieu (Reynaldo), Jack Lemmon (Marcellus), and Robin Williams (Osric) fill small roles. Most are adequate, and a few (Heston and Crystal in particular) are excellent. Only Robin Williams, affecting a silly accent and even sillier mannerisms, stands out as an obvious concession to commercial pressure. Williams is out-of-place, but his presence is only the smallest of blemishes on a wonderful production.

The leads are all in peak form. Michael Maloney (Laertes) and Nicholas Farrell (Horatio), both of whom appeared in Branagh's A Midwinter's Tale, give strong performances. Richard Briers, another long-time collaborator of Branagh's, adds layers of guile and intelligence to his interpretation of the fatuous Polonius. Brian Blessed makes us feel the power and malevolence of the ghost. Julie Christie's wonderful Gertrude allows us to understand why Claudius would resort to murder to win her. And Derek Jacobi's cultured, politically savvy, yet privately tortured Claudius is richly portrayed and worthy of Oscar recognition.

Then there's Kenneth Branagh, the film's undisputed star. The actor's emoting, which has been a problem in less-theatrical productions such as Mary Shelley's Frankenstein (in which he was hopelessly over-the-top), works to perfection here. For Hamlet's calmer, quieter scenes (such as the soliloquies), Branagh brings a contemplative and introspective quality to his performance. But, for the emotionally-rousing sequences, his interpretation is brash and forceful, drawing us into the pure drama of the situation and raising the hairs on our necks. It's a marvelous portrayal that compliments those of the many other cast members.

By using some creative license, usually in the form of flashback visuals without dialogue, Branagh adds more dimension to several of the characters. He shows scenes of domestic tranquillity in Elsinore years ago, with Gertrude, Old Hamlet, and the young prince playing games and laughing at the jests of Yorick, while Claudius lingers ominously in the background. In a moment that elucidates the true nature of their relationship, we're shown Hamlet and Ophelia in bed. And, with the ghost's words serving as a voiceover narrative, we see Claudius murder his brother and predecessor.

Briefly, I want to mention a few of the many scenes that arrested my attention. The first, which may be the most majestic moment in the entire film (and which is used for the theatrical poster), occurs during the departure of Gertrude and Claudius from Elsinore's audience chamber under a hail of flower petals while Hamlet, dressed in black, watches bleakly from behind them. Then there's the sequence where Hamlet encounters his father's ghost. The earth splits open, fire belches forth, mists coalesce, and the forest reverberates with the unearthly voice. Hamlet's "Get thee to a nunnery" confrontation with Ophelia is tense and emotionally wrenching. The graveyard scene, which opens the final act, is perfectly realized, especially as Hamlet recognizes the body in the coffin. Finally, the climax is handled with the right mix of drama and adventure, and includes a nice nod to Errol Flynn.

From the moment it was first announced that Branagh would attempt an unabridged Hamlet, I never doubted that it would be a worthy effort. After all, his previous forays into Shakespeare have been excellent. Nothing, however, prepared me for the power and impact of this motion picture. Hyperbole comes easily when describing this Hamlet, decidedly the most impressive motion picture of 1996. Nothing else this year has engaged my intellect, senses, and emotions in quite the same way. I have seen dozens of versions of this play (either on screen or on stage), and none has ever held me in such a grip of awe. This may be Branagh's dream, but it is our pleasure.