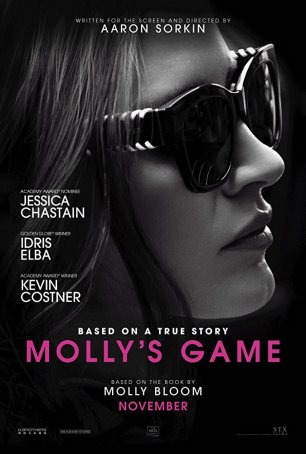 When it comes to using dialogue as a mechanism to drive a movie, few (not named David Mamet) are better than Aaron Sorkin with his rat-a-tat-tat approach and ability to craft monologues as living things. After having had a hand in writing some of moviedom’s most memorable screenplays (A Few Good Men, The Social Network, and Steve Jobs, among others), Sorkin is making his directorial debut with Molly’s Game, an adaptation of the true-life (with names changed) memoir of “Poker Princess” Molly Bloom. In true Sorkin style, the movie is all about the nonstop dialogue, which pours out at a mile-a-minute but, as a result of the way the words flow (not to mention the skill with which they are delivered), they function as momentum builders rather than verbal diarrhea.

Molly’s Game has its share of flaws. The structure, which bounces back-and-forth across a couple of time frames (with numerous flashbacks thrown in for good measure), is needlessly tortured. A crucial conversation late in the proceedings, while providing the necessary catharsis, feels like a too-facile way to resolve a lifelong conflict. And there are times when Sorkin accelerates so quickly that details fly by (many of which are highlighted by on-screen markers) before we can process them. (Most deal with how hands are won and lost in various poker games.) Nevertheless, the level of energy is so relentless that it’s difficult not to be caught up in the current and swept along. Combined with Jessica Chastain’s ferocious lead performance and strong supporting turns by Idris Elba (finally getting a role worthy of his talent after the consecutive duds of The Dark Tower and The Mountain Between Us) and Kevin Costner (who has re-invented himself now that the spotlight is no longer so bright), the screenplay and direction keep the viewer engaged for the full 140-minute running length. 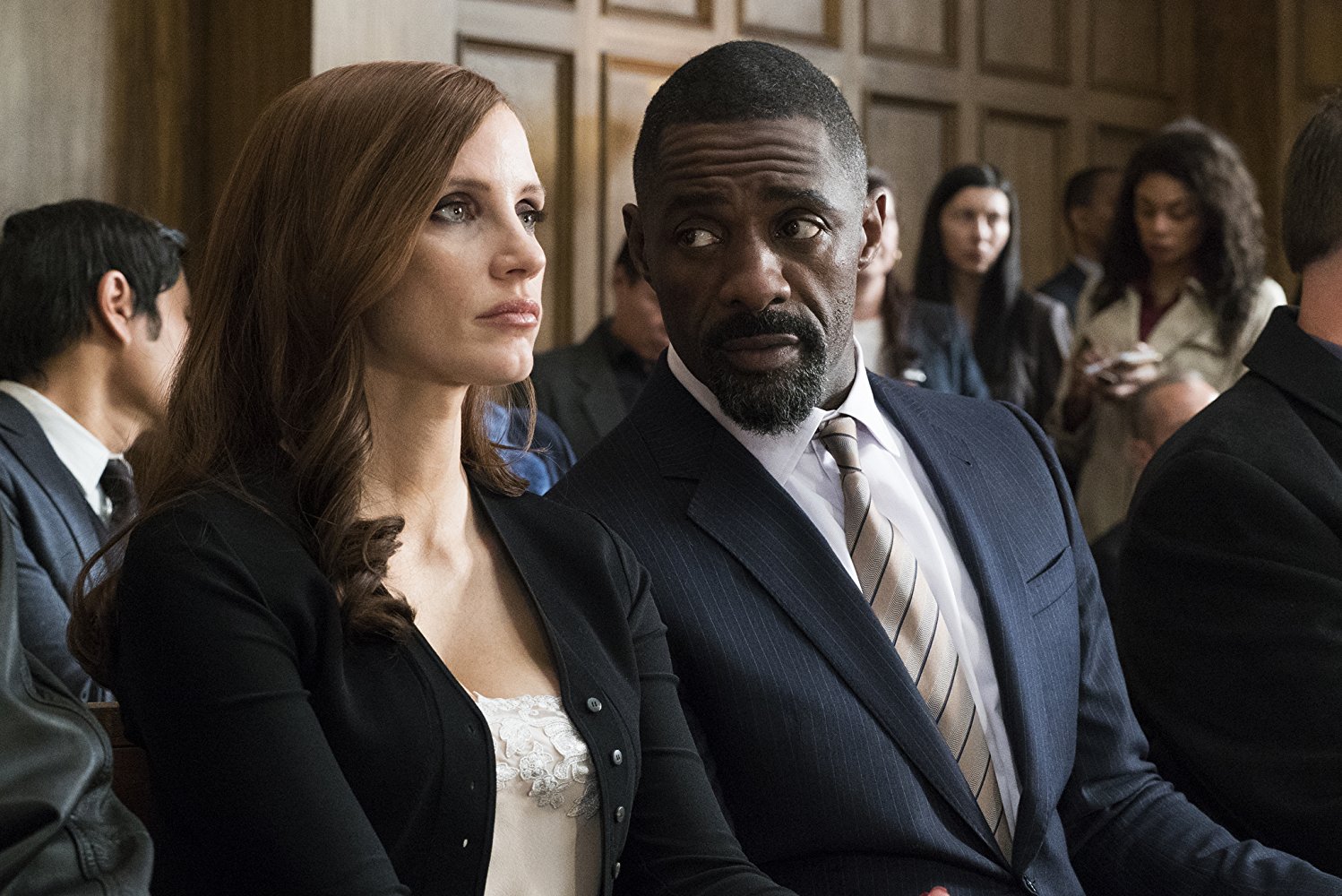 As we learn through flashbacks accompanied by detailed voiceovers, Molly (played mostly by Chastain, although Samantha Isler takes over for her as a teenager) was once a talented skier with Olympic aspirations. Driven by her perfectionist father, Larry (Costner), she seems destined for greatness until a freak accident brings her athletic career to an end. Following that, rather than throwing herself into law school, she takes some time off “to be young in someplace warm.” That “someplace” is Los Angeles where, through a series of coincidences, she ends up running high stakes poker games for big spenders – actors, moguls, and sports stars. For many years, Molly is able to operate unobstructed until she runs afoul of the ambitions of “Player X” (Michael Cera), a client who wants preferential treatment, and finds herself forced to relocate to New York. There, she rebuilds her empire but, instead of catering to stars, she rubs elbows with anyone who has a lot of money. That attracts the attention of the Russian mob, the American mob, and the FBI. By the time Molly realizes her peril, she’s so deep into drug addiction that she has lost her focus and the results are brutal.

The second timeline happens more than two years after her empire has collapsed. Broke and facing indictment and possible prison time, she approaches attorney Charlie Jaffey (Elba) for representation. Although initially reluctant to become involved with someone with such a “colorful” reputation, he is able to look behind the tabloid headlines and discover that, although Molly can’t pay his retainer, she is deserving of his services. She tells him her story and he agrees to help her although she proves to be one of those clients who rarely takes her lawyer’s advice. 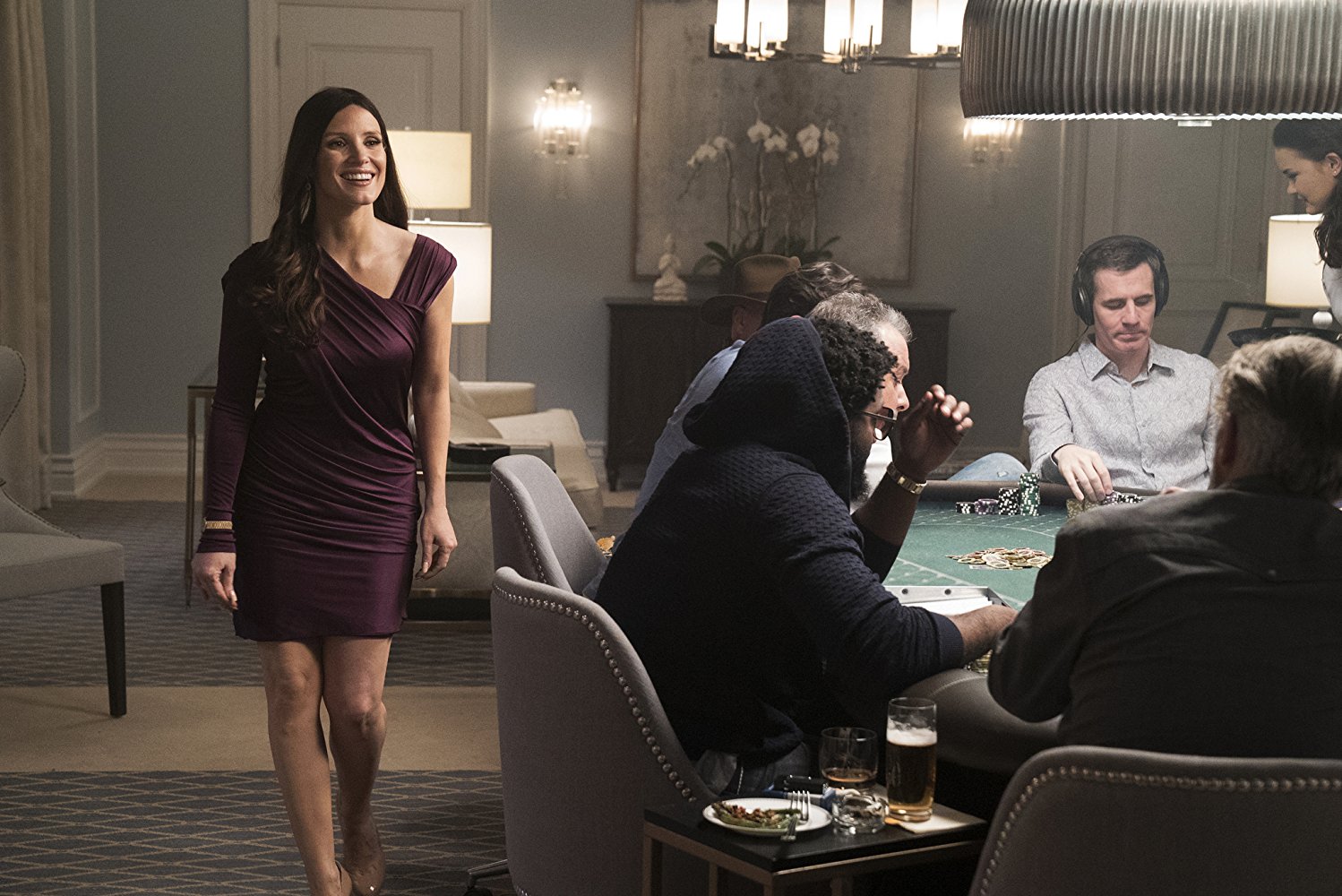 Chastain gets several Sorkin-scripted monologues and delivers them with the passion and tenacity of a lion ripping apart a fresh kill. Costner and Elba get their moments as well, with the latter’s speech about why the prosecutors should “do the right thing” being a perfect clip to show the Academy defending Elba’s Supporting Actor credentials. It’s all good stuff, delivered by a director who knows how to get the most out of performers speaking his words. Sorkin and Chastain are a perfect match – she knows what he’s after and delivers in spades (clubs, hearts, and diamonds as well). Her Best Actress nomination wouldn’t seem to be in doubt.

Superficially, Molly’s Game might seem to be about poker, but that’s really just the glitzy backdrop against which the action occurs. It’s also a way to contrast the lifestyle and culture of “glamorous” Los Angeles with “gritty” New York. The movie’s themes relate to addictions of various sorts: gambling, drugs, and (as Larry explains it) having power over powerful men. Sex rarely comes into things because there’s neither time nor space in Molly’s life for a libido. She’s too busy popping pills, downing them with booze, and lording it over her clients. The players, for their part, are too focused on losing six-figure pots to care about how much cleavage their hostess is (or isn’t) showing.

Sorkin’s structure neuters the potential for dramatic tension. From the beginning, we know what’s going to happen with Molly. There’s no surprise about where things will end up and how they get there. In her first conversation with Charlie, which occurs early in the proceedings, she sums up the entire 2003-2013 portion of the movie. That puts the onus on the dialogue and character building to keep us engaged. Those are Sorkin’s strengths and he plays to them.

Molly’s Game is opening into a cultural climate ripe for a character like this. Molly is strong and self-sufficient. Driven by her addiction to “having power over powerful men”, she forges her own empire and, when it crumbles, she refuses to sell her principles for better treatment or a more favorable plea bargain. She’s the perfect antidote to a post-Weinstein Hollywood, the response to ego-fueled male entitlement. Sorkin doesn’t have a crystal ball and didn’t know what loomed ahead when he was making Molly’s Game but the timing couldn’t be better for this movie’s release or Chastain’s Oscar chances.