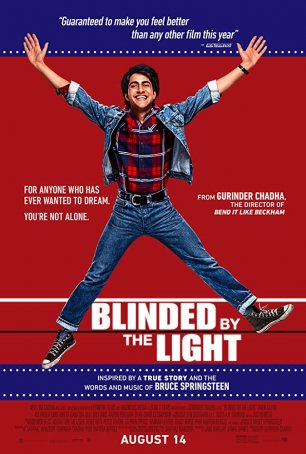 Blinded by the Light is a one-third Bruce Springsteen hagiography, one-third kitschy ‘80s recreation, and one-third feel-good father/son coming together. Surprisingly, however, it works. The movie combines an infectious spirit with a serious message to create something that is crowd-pleasing without seeming slight or twee. It personalizes the lyrics of some of Springsteen’s best-known tunes and illustrates the universality not only of the music but of the underlying ideas. Like Rocketman and Yesterday, Blinded by the Light will be strengthened for those with an appreciation of the core music, but unbridled passion isn’t a requirement.

Director Gurinder Chadha, whose previous efforts include Bride & Prejudice and Bend it Like Beckham, brings a little Bollywood flavor to a familiar story of the generational clash between an artistic son and a traditional father. In this case, Javed (Viveik Kalra) is the former – a 16-year old with a love of poetry, Bruce Springsteen, and a radical girl named Eliza (Nell Williams). Malik (Kulvinder Ghir) is the latter – a factory worker for 16 years who immigrated from Pakistan to England in search of “a better life” for his son but now finds himself out of work and forced to rely on his wife’s sewing to make ends meet. Seeing no practicality in Javed’s love of writing, Malik pushes his son toward economics and a good career – directions that hold little interest for the budding romantic. 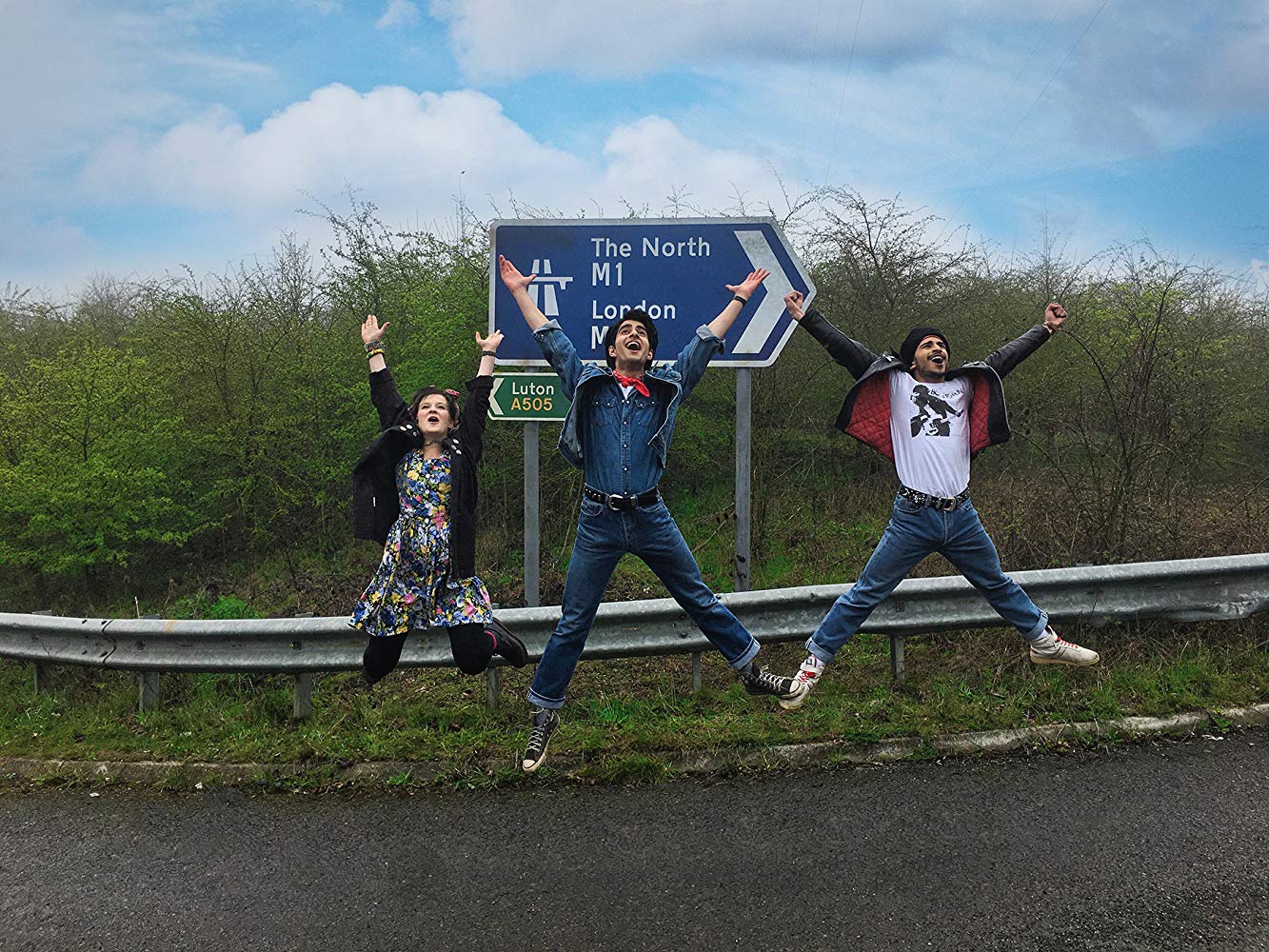 When the Coen Brothers wrote the line “out of hope, out of rope, out of time,” they might have been speaking about someone like Javed, a square peg in a round hole whose sole desire is to get out of the backwater town of Luton and attend university in Manchester. His father’s advice – “stay away from girls and follow the Jews!” – doesn’t amount to words to live by. The film’s first act carefully sets the 1987 stage by incorporating all the usual clichés (including a cellphone that’s larger than a brick, and hair that’s bigger even than that) and using peppy pop songs like the Pet Shop Boys’ “It’s a Sin” and ah-ha’s “The Sun Always Shines on T.V.” to establish the mood. Javed is skating through life, striving to achieve a dream but more likely on a collision course with a dead end, when three things happen. The first is the introduction of a new English teacher, Ms. Clay (Hayley Atwell), who takes an interest in Javed’s writing. The second is the attention of Eliza, whose interest isn’t as much in the young man’s poems but in his person. The third is an encounter with Roops (Aaron Phagura), a Springsteen true believer who lends cassettes of Born in the USA and Darkness on the Edge of Town to Javed, claiming they will change everything. They do.

The film’s first Springsteen song, “Dancing in the Dark,” attempts to take the viewer on the same journey undergone by Javed as he recognizes that a white guy from New Jersey eloquently expresses the mindset of a Pakistani immigrant to the U.K.  To do this, Chadha isn’t above getting a little cheesy, playfully putting the lyrics on screen and projecting images on background objects. The visuals may not be effective but Springsteen’s music does the job all on its own. 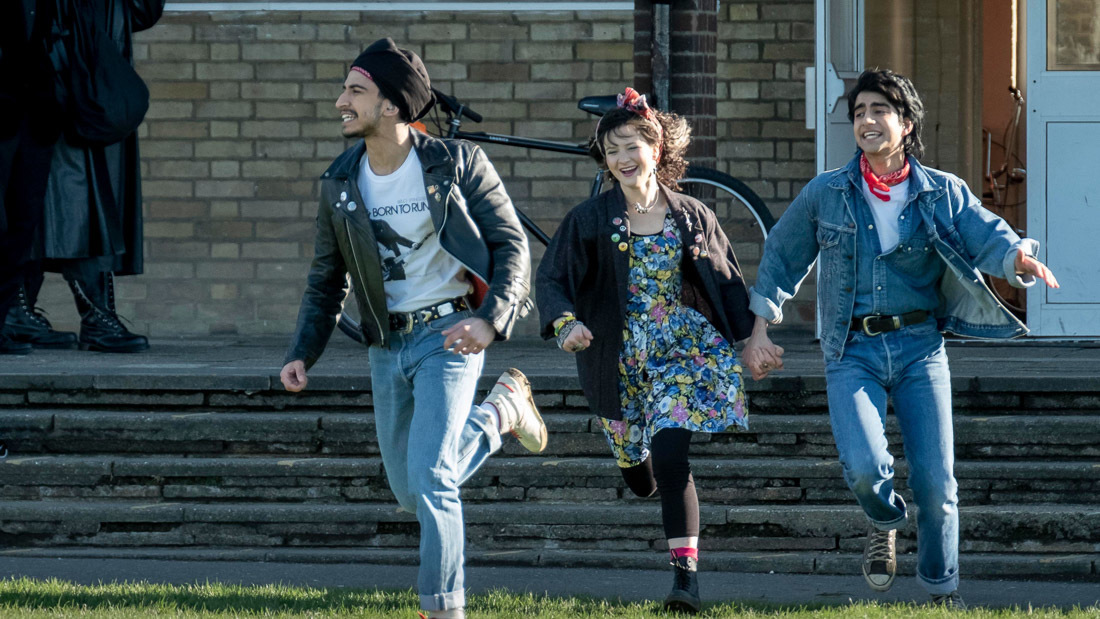 Blinded by the Light’s second act is its most effervescent, overflowing with Springsteen songs and occasionally going “full musical” with characters singing along with Bruce and dancing in the streets. The two “big” numbers are “Prove It All Night,” where Javed serenades his new crush, Eliza, while she recognizes there’s a lot more to him than she initially thought, and “Born to Run,” where everyone does what one would expect from the title.

The final 45 minutes are more dramatically grounded, moving the Springsteen tunes into the background and concentrating on Javed’s demons: his lack of self-confidence, the racist environment where he lives (at one point, a skinhead spits on him), and his escalating conflict with his father. The screenplay doesn’t break any new ground in showing how Javed navigates the road to adulthood but it does so with honesty and openness.

The script is loosely based on the life and experiences of journalist Sarfraz Manzoor, who claims to have seen Springsteen in concert 150 times and whose memoir, Greetings from Bury Park, provided a template. He wrote the screenplay with Chadha and her husband, Paul Mayeda Berges. Throughout her filmmaking career, Chadha has been best known for her focus on the difficulties of strong Indian young women living in a Western society (themes close to her own heart). Blinded by the Light proves that she can be as in-tune with the male perspective as the female one. This is a thoroughly charming coming-of-age story that illustrates the power of music to provoke change not only in individuals but on a larger scale. Springsteen’s songs and the movie’s message resonate as strongly in this era of Brexit and populist movements as they did in Thatcher’s mid-1980s England.