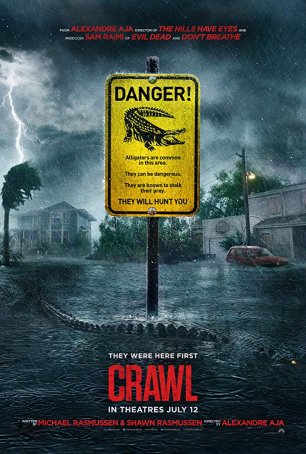 Crawl is an old-fashioned B-grade monster movie made with 2019 technology. In short, that means plenty of gore and jump-scares to go along with creatures that no longer look like puppets or men in rubber suits. Jaws kept the shark hidden for most of the movie because Steven Spielberg didn’t have the money to create something that viewers would accept for long stretches. Director Alexandre Aja, although not blessed with the biggest of budgets, is able to craft not only several realistic alligators (using a mix of animatronics and CGI) but a credible Cat 5 hurricane to boot. The film delivers what it promises and it’s hard to believe many fans of the genre are going to leave Crawl disappointed, even if it doesn’t overreach its admittedly limited grasp.

The bare-bones story is executed with economy and a laser-guided focus. Call it Jaws in a crawl space, where a couple of largish alligators stand in for the sharks. With a major hurricane bearing down on the Sunshine State, Haley Keller (Kaya Scodelario) searches for her father, Dave (Barry Pepper), who has gone M.I.A., apparently ignoring the mandatory evacuation order. She finds him in the scummy crawl space basement under his soon-to-be waterlogged house, but he’s not alone. Keeping him company are a couple of gators, one of which has taken a bite out of his shoulder and broken his leg. Haley soon finds herself in an equally dire predicament as she tries to figure out a way to save herself and her father with the alligators guarding the exit and the waters rising. 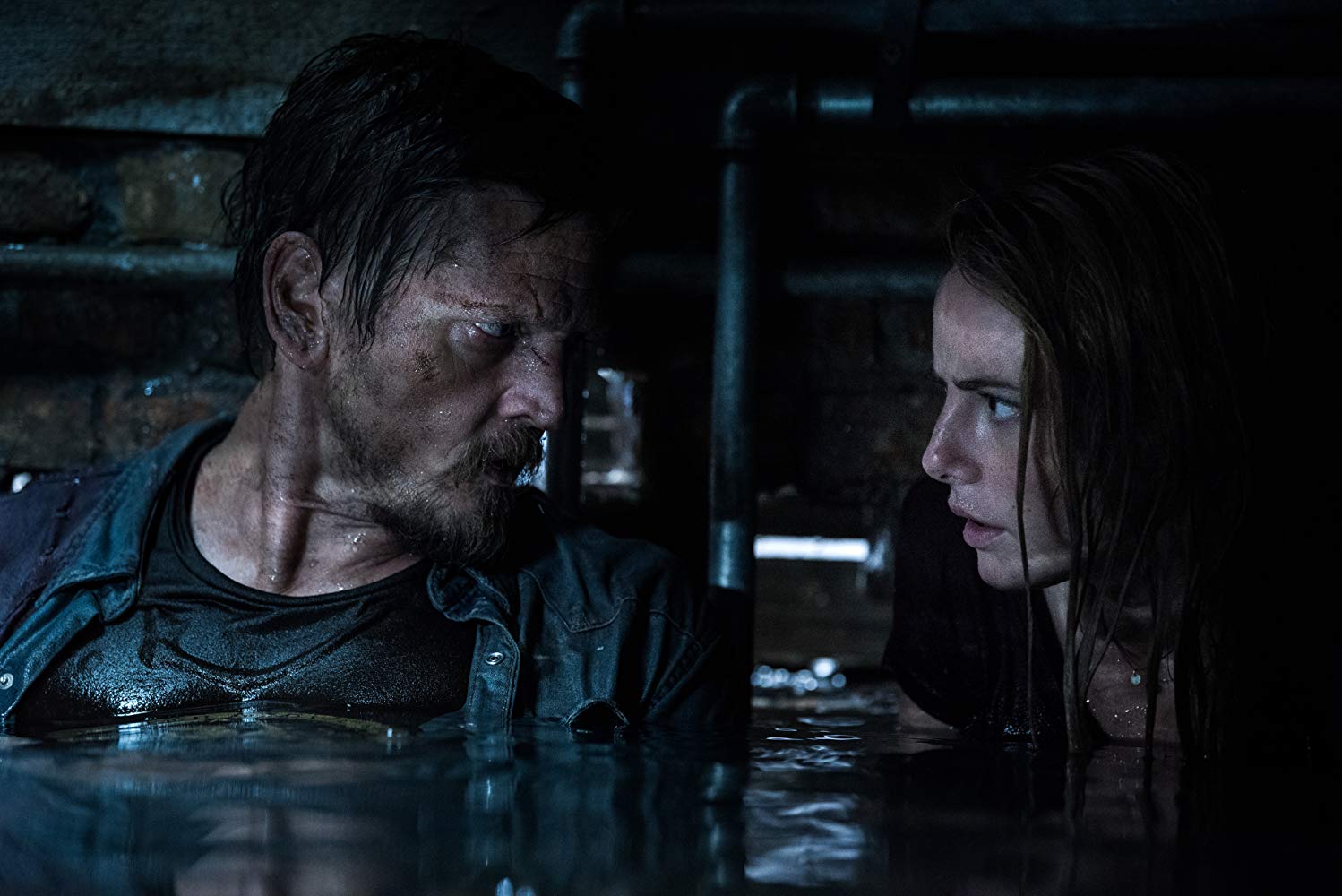 Crawl would be better if the cat-and-mouse game between Haley and the alligators was a more inventive. There are surges of suspense and enough jump scares to keep the viewer from settling in too comfortably. Aja’s reputation (he has made, among other things, High Tension and the Hills Have Eyes remake) adds something to the proceedings – those who know his work will recognize that he has no compunctions about killing off characters and he doesn’t demand happy endings. We realize early on that it’s not out the realm of possibility that the only survivors may be the reptiles.

Although Jaws has set the bar too high, a more appropriate comparison might be the Blake Lively 2016 creature feature, The Shallows. Like Crawl, The Shallows focused on a single character in a fight for her life against an implacable foe. Neither film attempts to hide its pedigree or its intentions. Both fit comfortably into their genres. Neither overstays its welcome by attempting to stretch a sub-90-minute story into something longer. 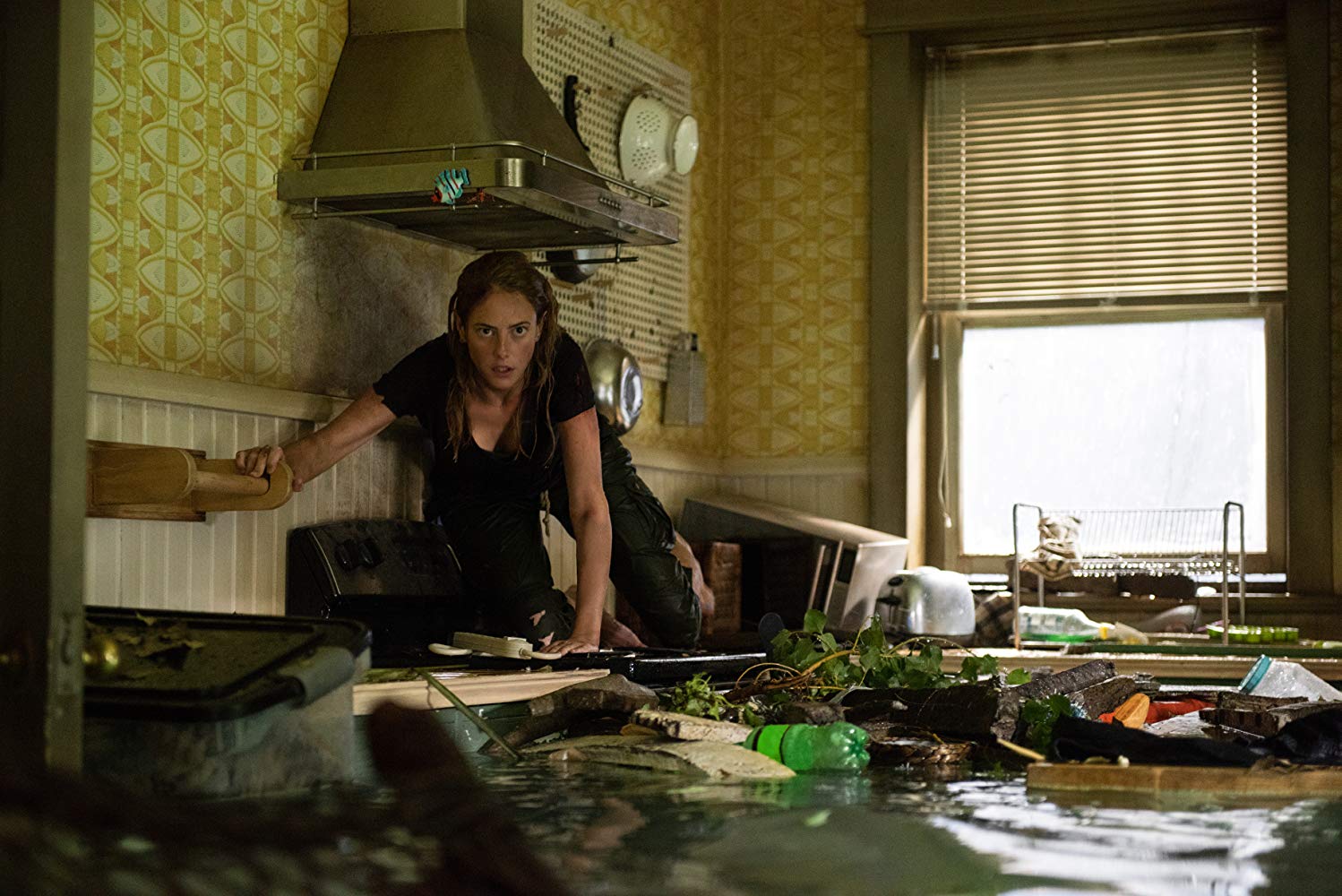 Even inoculated against plausibility complaints by its adherence to the tropes and expectations of the monster movie, Crawl still occasionally encounters choppy waters. Aja’s skill as a horror filmmaker allows him to generate plenty of tension but the movie doesn’t do anything surprising. The plot is by-the-numbers with no neat little twists to turn up the juice. The film spends a bit too much on a sappy father/daughter reconciliation subplot – it feels like the filler it is. And there are a few too many redshirts floating around (literally). Although there may be questions about Haley and Dave’s long-term survivability, the same can’t be said about the looters across the street-turned-stream or the helpful cop. As for the dog – well, we all know Fido stands a better chance than his two-legged friends.

It’s worth mentioning that this isn’t Aja’s first venture into the creature pond. Back in 2010, he made the deliciously campy Piranha 3D. For Crawl, Aja has dropped the comedic and satirical elements in favor of a straightforward thriller – an approach that’s satisfying in some ways but disappointing in others. Truth is, Piranha 3D was a lot more fun than this claustrophobic trapped-in-the-basement story. Still, it takes chops to combine elements of a disaster movie and a gore-soaked creature fest and not lose the viewer in the maelstrom. Crawl is made for the niche audience who devours this sort of material with as much gusto as the alligators going after their prey.