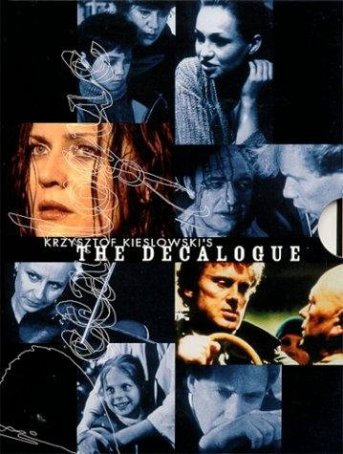 For Krzysztof Kieslowski's North American followers, Decalogue has attained an almost-mythical status. Kept out of theaters because of a distribution faux pas (the North American distributor refuses to allow the films to be shown), Decalogue has rarely been screened theatrically on this side of the Atlantic. Fortunately, using a U.K. print, a North American "tour" of the production has been organized with stops in various cities in the United States and Canada, allowing audiences an opportunity to view one of the most important works of the director's career.

There is some truth in the statement that to really understand Kieslowski, it's necessary to see Decalogue. For him, this was a transition film. Before Decalogue, the director was better known for his documentaries; only a few features -- Camera Buff, Blind Chance, and No End -- had generated international attention. After Decalogue, Kieslowski released The Double Life of Veronique, Blue, White, and Red -- all of which are regarded as exceptional pictures. Bridging these two "phases" of film making is the multi-part Decalogue, which, taken as a whole, may be the most meaningful of all that Kieslowski has brought to the screen.

In the director's own words, he "concentrated more on what's going on inside [the characters] than what's happening on the outside." While his earlier pictures dealt with how "external circumstances and events influence people", beginning with Decalogue, Kieslowski focused on what occurs with "people who come home, lock the door on the inside and remain alone with themselves." Veronique and the Three Colors trilogy illustrate this trend more explicitly, but it first takes root here.

Kieslowski first envisioned Decalogue as a project to give young Polish directors their first shots at film making. He and his writing partner, Krzysztof Piesiewicz (who also co-authored No End, Veronique, and Three Colors) scripted the episodes, intending for a different director to helm each one. However, when the screenplays were complete, Kieslowski realized they were too good to hand over to someone else. In the end, he directed all ten -- completing the entire series in under a year.

Anyone can make a movie about the Ten Commandments, but few such productions would share the subtlety and depth which characterize Kieslowski's vision. It isn't the subject matter per se that gives Decalogue its greatness -- it's the manner in which the director handles his material. For part 5, those expecting to see a morality play about the evils of killing are in for a surprise. To be sure, this episode is about murder and its ramifications, but the issues examined are far more complex, and Kieslowski shuns absolutes of good and evil.

Many of the segments deal only peripherally with their associated Commandment, while others tackle more than one. Part 2, for example, in which a doctor's diagnosis will determine whether an unborn baby is brought to term or aborted, is intended to show one of the ways man assumes the role of God, and can be seen as a reference to either Commandment 1 or 2. Parts 6 and 9 both deal with themes of love, sexual obsession, and jealousy. Parts 7 and 10 involve thefts, albeit of radically different kinds. Parts 1, 4, and 7 grapple with issues of parenting. Part 3 has virtually nothing to do with the Sabbath, but a great deal to do with lying, while the lie of part 8 is only a jumping-off point for a far deeper ethical debate. And so it goes for all ten episodes, with multiple issues criss-crossing and weaving their way through the stories.

Like Blue, White, and Red, each episode of the Decalogue cycle can be viewed individually. However, for those who sit through more than one, there are several connecting threads. The entire series takes place in one Polish housing complex and, as a result, various characters from certain episodes make brief appearances in others. There is one nameless man who has a cameo in nearly every segment (often carrying some bulky object). Occasionally, references are made to the plights of others -- for example, the doctor's dilemma in part 2 is debated in an ethics class in part 8.

Each episode of Decalogue has a different tone. Part 1 starts out playful as we're introduced to a loving father and son. Part 2 is somber. Part 3, which takes place at Christmas, is suitably festive, and Kieslowski works in a few humorous moments. The focus in part 4 is kept intimate, while in part 5, which deals with capital punishment, it's very public. Part 6 is a warped romance, elements of which are later echoed in both White and Red. Part 7 is another grim episode, followed by an even more sobering part 8, about a Holocaust survivor confronting the woman who wouldn't hide her. Part 9 is a modern tragedy that ruminates about the real nature of love (it's "in one's heart, not between one's legs"), and part 10 is the closest Decalogue ever comes to being a comedy.

Each viewer will have an opinion of which segment is the most affecting. At the screenings I attended, it seemed that every person had a different favorite. By way of illustrating the scope of the series, I'll spend a little space discussing the three I was most impressed with. Though the content of the other seven differed from these, many of the intentions were similar.

Part One: "I am the Lord thy God. Thou shalt have no other God but me." Kieslowski has a unique take on idolatry in this segment. Instead of introducing us to worshippers of a traditional pagan god, he gives us a good Polish father who believes in fate and science, but not God. One day, when his young boy wants to go skating, he uses his computer to calculate whether the ice on a local pond is thick enough. The computer says it's safe, but the boy falls through and drowns. Decalogue 1 is crafted as an admonition to those who blindly follow any philosophy, be it religious or secular, and Kieslowski's ability to make these characters believable and sympathetic drives home the message.

Part Four: "Honor thy father and thy mother." A young woman prematurely opens a letter addressed to her by her dead mother that was intended to be read only after the passing of her father. In the letter, it is revealed that the man who raised her is not the one who sired her. Armed with this knowledge, the daughter decides to act on long-submerged feelings to seduce him. This episode is a study of the so-called Electra complex, in which a girl is given the opportunity to act on an attraction to her father. Kieslowski carefully balances parental feelings with sexual impulses to come up with a powerful drama that questions some of the basic tenets of what it means to be a father (or mother). The ultimate resolution is the perfect ironic punctuation to all that comes before.

Part Six: "Thou shalt not commit adultery." (Also, A Short Film About Love) Perhaps the most intriguing of all the episodes, this one confronts voyeuristic obsession. A young postal worker, Tomek, spies on a beautiful, promiscuous woman, Magda, living in the tower block opposite. After watching her from afar, he finally gets up the courage to meet her, but, by de-objectifying her, his vision of perfect love is shattered. She informs him that there's no such thing as love, only sex. This leads to a failed suicide attempt. However, by the time Tomek returns from the hospital, the circumstances have been reversed. Now, Magda is obsessed with him. Love -- or at least some degree of caring -- has awakened inside her even as it was destroyed within him. Despite the grim final act, this segment has its lighthearted moments, the most memorable of which is Tomek's reaction when Magda agrees to accompany him on a date. The episode is an invitation to speculate about the meaning of love, and the different ways people view it. It's also about disillusionment and accepting the consequences of one's actions. Had Magda been more sensitive to Tomek's feelings, she never would have been trapped by the emotions that resulted from his attempted suicide.

Certainly, one of the many elements that makes Decalogue so powerful is that, among the dozens of primary actors, there are no inadequate performances. Every character is portrayed naturally, and each story unfolds without uneven acting creating a question of authenticity. For those familiar with other Kieslowski films, there are several recognizable faces. Zbigniew Zamachowski, who starred in White, plays a lead in part 10. Jerzy Stuhr, from Camera Buff and White, is also in the same segment. Janusz Gajos, from White, is the father in part 4. And Grazyna Szapolowska, Magda in part 6, also appeared in No End.

Throughout the history of film, there has been a select group of standout pictures -- movies that, for technical or artistic reasons, have made an indelible imprint on viewers. Taken as one ten-hour exploration of the human experience, Decalogue is deserving of a place in that unique cadre of films, alongside such undisputed classics as Citizen Kane, Lawrence of Arabia, Last Tango in Paris, The Godfather, Fanny and Alexander, and Schindler's List (to name a few). Make no mistake - ten hours is a long time to watch a movie - but Decalogue's drama is never boring or repetitive (not that I'd recommend viewing the whole thing in a single, uninterrupted chunk). This is the product of an expert storyteller/filmmaker at the height of his craft, creating a masterwork the likes of which comes along only once in a great while. There is no other motion picture out there like Decalogue, which makes it more the pity how difficult it is to hunt down in North America. But, for those who take the trouble, the payoff is more than worth the effort.

Acknowledgment: Kieslowski's quotes are taken from Kieslowski on Kieslowski and the director's introduction to the published Decalogue screenplay.