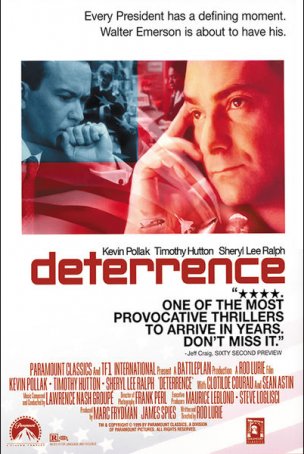 There's a lot going on in Deterrence, the directorial debut of journalist-turned-filmmaker Rod Lurie. Presidential election politics. An international crisis. The threat of nuclear war. All that, plus a blizzard that keeps the President trapped and isolated, with his only connection to Washington being via four secure phone lines. Without special effects to play with (the limited budget disallows even the smallest amount of digital wizardry), Lurie is forced to rely on plot and character development alone – he can't fall back on some impressive-looking explosions whenever the story starts getting thin. The results are frustratingly mixed. This movie toys with some fascinating issues, but, from time-to-time, the proceedings inexplicably slip into stupidity.

While Deterrence's exact time frame is not specified, events take place in the near future. It's a Presidential election year, and incumbent Walt Emerson (Kevin Pollak) is facing a stiff challenge in his party's primary. The reason is simple: he was an appointed vice president who took over upon the death of his predecessor four months earlier. (Think the Gerald Ford scenario.) Now, after winning the Colorado primary, he finds himself trapped by a blizzard in a roadside diner in Aztec, Colorado, 20 minutes away from Air Force One. After greeting the small group of patrons gathered in the establishment, he settles down to enjoy the house specialty – and that's when all hell breaks loose.

Half a world away, Udei Hussein (the son of Saddam) leads 500,000 Iraqi troops into Kuwait, crushing the token resistance of United Nations (translated: United States) troops assigned there. But Kuwait does not appear to be their final goal; they push onward, headed for Saudi Arabia, with chemical and biological weapons in their arsenal. Israel is mobilizing its army, U.S. armed forces are bogged down in Korea, Hussein is readying chemical/biological attacks on Israel, Turkey, and Greece, and the whole region is in turmoil. Meanwhile, isolated in the Colorado diner, President Emerson learns these things through a TV news bulletin. Soon, with the help of a camera crew that has been following him on the campaign trail, he is addressing the world. His speech begins with the usual denunciations of Iraq's aggressiveness, but ends with a shocking and ominous declaration: if Iraq does not withdraw from Kuwait in 90 minutes, the United States will drop a nuclear weapon on Baghdad. Thus begins a tense waiting period during which several of the President's advisors seek to convince him to back down while Iraq plots a counter-move. 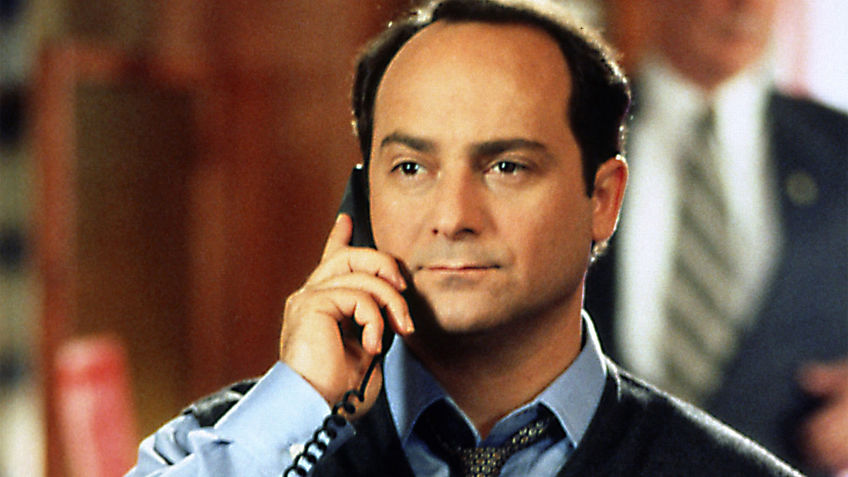 Events unfold in real time, and much of the tension (to the extent that there is tension) is generated by our uncertainty about how far Emerson will push his policy, especially when Iraq shows what appears to be a trump card. Deterrence is at its best when it sticks to strategy and tactics. Is this poker or chess? The film is less successful in dealing with the potential moral and ethical consequences of annihilating millions of innocent civilians. Both sides of the issue (to drop the bomb or not to drop) are presented, but neither with much conviction, and the only time Emerson wavers is during a conversation with his wife, who pleads with him not to go through with his actions. The movie's weakest and least convincing aspect is its portrayal of the diner's patrons. In the beginning, they're merely inconsequential, but, as the story develops, they become irritants and a means by which plot contrivances can be introduced.

Of course, at the heart of Deterrence lies the question about President Emerson's motivations. Only four months in office, he faces criticism and uncertainty on all sides. Is his bold threat calculated as much for political gain at home as it is to resolve an international crisis? And what happens if Iraq doesn't back down, if the strategy "to roll the dice that [Hussein] will comply" fails? Does the United States then launch a nuclear attack to save face? Can a President back down at the last minute without destroying his credibility across the world?

Ironically, even though much of Deterrence is about politics, the movie would have been a more rewarding experience with greater attention paid to details. Lurie's view of world affairs is simplistic and naive. For example, Congress is only mentioned in passing, and we are never privy to attempts by other major powers – either friends or foes – to intervene. Deterrence has an aquarium mentality – the United States and Iraq are contained inside, and everything else is external and, to some degree, unimportant. 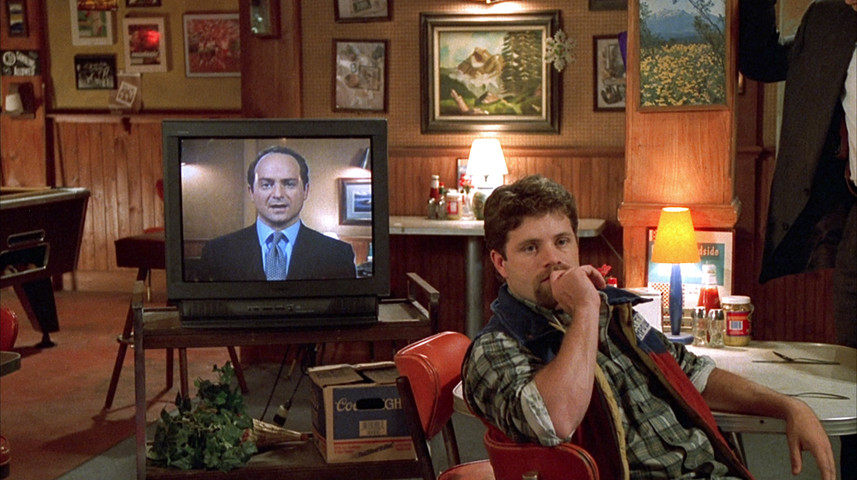 The ending, while not a complete cheat (it is, at least to some degree, led up to), is nevertheless disappointing because it cuts out the teeth of Emerson's critical dilemma. There are also a couple of other jarring bumps along the way, both of which involve people outside of the Presidential circle. On one occasion, a bigot gives a badly scripted speech about how he and all of his redneck friends are behind the President. Then there's the instance when the diner's cook believes a little violence can influence foreign policy.

As the President of the United States, Kevin Pollak is credible. Outwardly, Emerson is stern, decisive, and the kind of man who inspires confidence, but there is a hint of uncertainty, as if he really doesn't believe in what he is doing. Timothy Hutton plays Emerson's Chief of Staff and Sheryl Lee Ralph is his National Security Advisor. Together, they represent the Voice of Conscience.

As a feature debut, this is a credible effort, and Lurie certainly hasn't started out with something undemanding or insignificant. Despite the lack of special effects or intricately choreographed action sequences, Deterrence contains moments when it is engrossing and suspenseful. It's just unfortunate there aren't more of them, and that the script has a distressing tendency to turn dumb at the most inconvenient times.