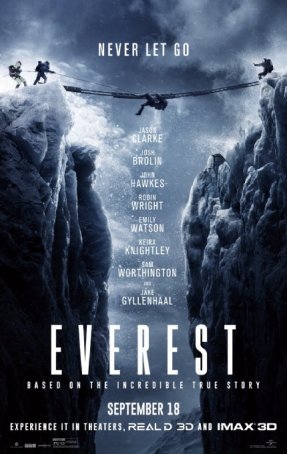 Mount Everest has been conquered. Since the day in 1953 when Edmund Hillary and Tenzing Norgay became the first men to stand atop the summit, thousands have successfully climbed the mountain. Their reasons for making the ascent are as varied as the climbers themselves but often have to do with proving something (to themselves or others), fulfilling a dream, or inflating an ego.  Sometimes more than one of those things. On May 11, 1996, however, the dream became a nightmare from which eight climbers didn't awaken. Directed with powerful verisimilitude by Icelandic filmmaker Baltasar Kormakur, Everest provides a condensed, partially fictionalized chronology of how the mountain became executioner and tomb for five of those eight people.

Everest is more disaster film than adventure yarn, although it relies heavily on the man-versus-nature aspect of the situation. Unfortunately, as is often the case with productions that focus on the struggle to survive against impossible odds, the human elements are often shortchanged. In this case, character development is neglected in favor of awe-inspiring views. There are times when we feel like we're on the mountain. Unfortunately, our companions - the men and women populating the screen - are never more than half-formed.

(The events chronicled in Everest were previously depicted in a 1998 documentary of the same name. David Brashears, whose images comprised the earlier account, is a minor character in this movie. Comparing the two - to the extent it's fair to compare fiction and non-fiction - there's little doubt that the documentary is the better film both in terms of its visuals and its immediacy.) 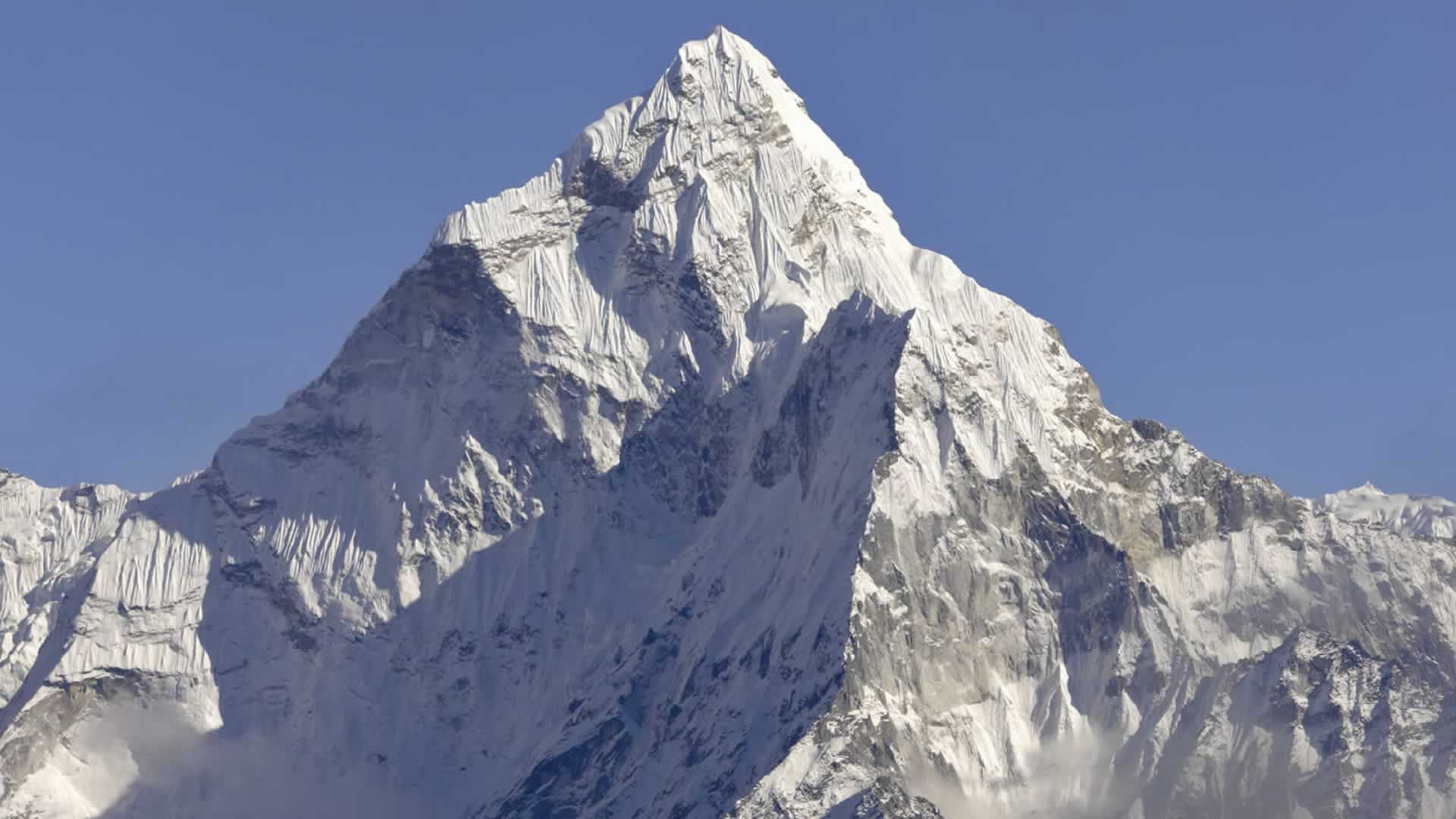 Everest opens with a sluggish first act characterized by the introduction of too many underdeveloped characters. For the most part, they are identified by a defining trait or two. New Zealander Rob Hall (Jason Clarke) is the leader of the expedition. He has a loving, pregnant wife (Kiera Knightley) waiting at home for his return. His clients include Beck Weathers (Josh Brolin), a wealthy Texan in a troubled marriage; Jon Krakauer (Michael Kelly), a writer; Doug Hansen (John Hawkes), a postman who has scrimped and saved to afford the trip; and Yasuko Namba (Naoko Mori), a woman who has previously achieved six of the Seven Summits. Also headed for the mountain is Scott Fischer (Jake Gyllenhaal), the leader of a rival climbing group. Everest takes an inordinate amount of time to get the pieces in place. However, once the group departs base camp and begins the ascent, the film sloughs off its slow pace and transforms into a gripping tale of survival, life, and death.

The movie's final two-thirds detail the torturous difficulties encountered by the climbers as they strive to reach the so-called Death Zone and what happens to them on the descent when a blizzard sweeps in. There are several deaths, one seemingly impossible survival, and a harrowing helicopter rescue. The screenplay, credited to William Nicholson and Simon Beaufoy, tries to tweak the audience's emotions by introducing some sentimentality but these efforts are largely ineffective. The mountain dominates everything, including the existences of those who made foolish decisions in attempting to surmount it. 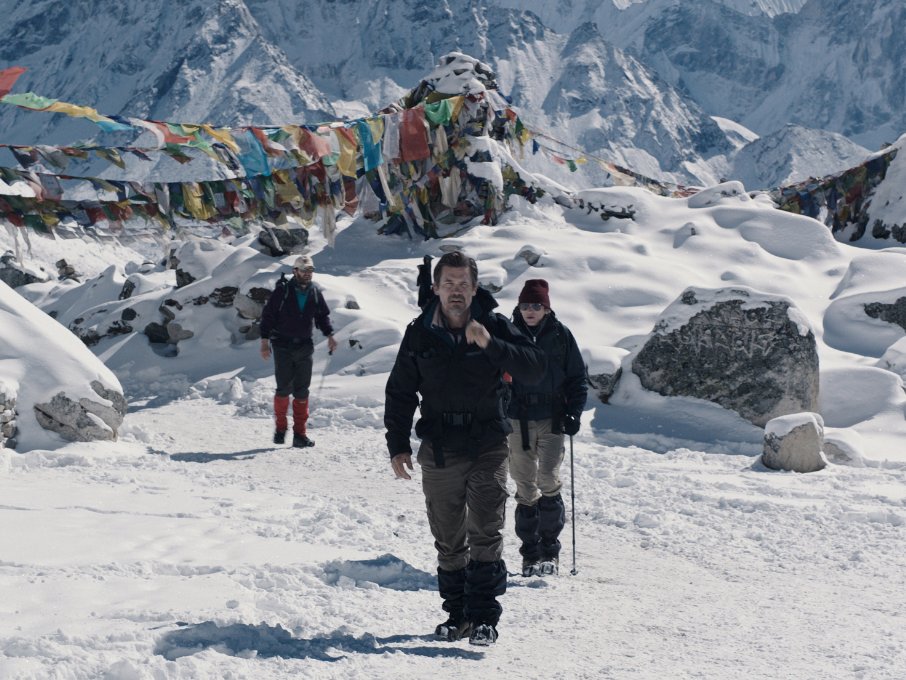 Everest's triumph lies in its ability to convey the difficulties and dangers of the journey. Climbing the mountain, which stands at more than 29,000 feet in height, is no pleasure jaunt. Through a combination of on-location footage, digital chicanery, and in-studio filming, Kormakur is able to replicate the climb with startling effectiveness. The big screen is helpful in amplifying Everest's majesty - the visuals won't be as impressive viewed on a television or (worse) a tablet and/or phone. The 3-D, on the other hand, although not detrimental, isn't used to good effect.  It's simply there, an unnecessary add-on that does little beyond inflate the ticket price. Too bad it's not available in 2-D IMAX. That would be the preferred format. 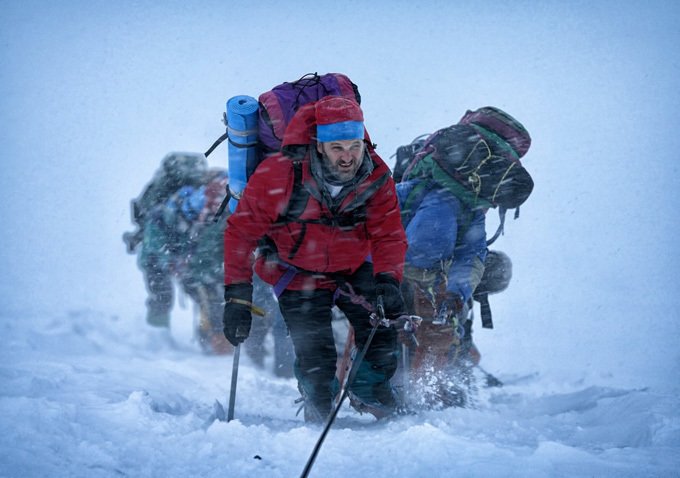 Everest boasts an impressive cast but, aside from Josh Brolin and Jason Clarke, no one is tasked with giving an Oscar-worthy performance. Character-actor Clarke doesn't overwhelm with a memorable performance but his role is central and he has enough screen time that we're likely to remember him. Brolin, on the other hand, brings energy to a thinly-written role. Everyone else does what they're asked to do - Kiera Knightley, Emily Watson (as Rob's business partner), Jake Gyllenhaal, and John Hawkes. Sam Worthington (as a climber involved in the rescue effort) and Robin Wright (as Beck's wife) are superfluous. Everest may be many things but it's not a showcase for the respected actors who appear in it.

Everest is a different animal from a garden-variety disaster movie. Although some of the beats are the same, the symphony is darker and more haunting. The true story aspect is one reason; the lack of reliance on genre tropes and clichés is another. Everest is not replete with hard-to-believe acts of heroism, annoying kids, and plucky pets. It also doesn't feature an unnecessary human bad guy; the mountain is sufficiently implacable adversary. And, if Everest serves no other purpose, it functions admirably as a deterrent to answering the age-old question of "Why [climb the mountain]?" with a glib "Because it's there."