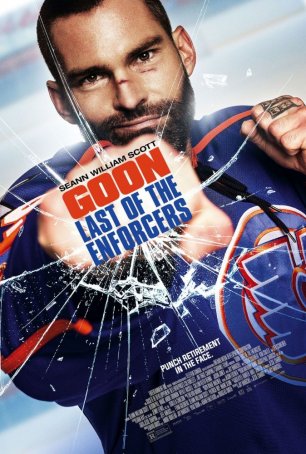 Since its 2011 release, the film Goon has become something of a cult phenomenon, especially among Canadian hockey fans. (Is that term redundant?) This status likely explains the existence of a sequel. Called Goon: Last of the Enforcers, it continues the story of many of the characters, trading equally on nostalgia and sports movie clichés in an attempt to capture a fraction of the unexpected goodwill bestowed upon its predecessor. It’s hard to see even the most ardent fans of Goon being happy with the second installment, however. Like most sports movie sequels, this one falls into the trap of recycling the greatest hits of the original. In addition to regurgitating parts of Goon, Goon: Last of the Enforcers pilfers liberally from Rocky 3 and Rocky 4. The comedy is embarrassingly unfunny, the attempts at drama are badly acted and sometimes cringe-worthy, and the copious amounts of blood during the fight sequences fall short of being amusing while sabotaging any hope of taking them seriously.

Last of the Enforcers begins several years after the events of Goon. During a NHL strike, the media’s focus shifts to the minor leagues where Doug “the Thug” Glatt (Seann William Scott), the enforcer for the Halifax Highlanders, has been named the team captain. Doug soon learns that there are bigger, nastier goons out there and a confrontation with one of them, Anders Cain (Wyatt Russell), ends his career. Forced out of hockey, he tries to jockey a boring desk job with his duties as a father-to-be, but the lure of the rink proves to be too strong. With encouragement from his former idol and one-time rival, Ross Rhea (Liev Schreiber), he gets himself back into the action and returns to the Highlanders after promising his wife, Eva (Alison Pill), that he won’t fight. That proves to be easier said than done when he comes face-to-face with Anders. 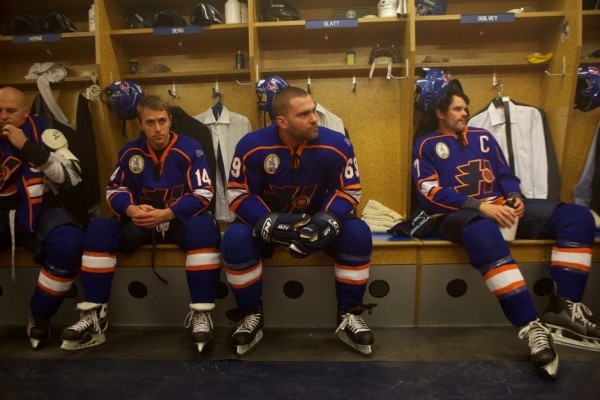 Although Goon didn’t make much of a splash when it was released six years ago, it had an easygoing charm that allowed viewers to overlook the overfamiliar story elements. Sports movies in general have to follow certain rules and Goon did that. Winning performances by Seann William Scott as the dim-but-likeable Doug, Alison Pill as his love interest, and the always-reliable Liev Schreiber elevated Goon to an unexpectedly high level. Unfortunately, most of what was good about Goon didn’t make the return trip to Last of the Enforcers. Jay Baruchel, who co-wrote Goon, takes over as director for the sequel and his over-the-top approach, especially to the comedy sequences, creates some jarring tone shifts. The returning characters are pale copies of their previous incarnations with the exception of Ross, who, like Apollo Creed, undergoes a personality upgrade. Seann William Scott, who made us forget Stifler when he first played Doug, gamely tries to resurrect the character but never quite gets there. Maybe it’s the writing but the heart and soul are missing. This is a hollow avatar of an ice rink gladiator.

Through the entirety of the movie, there’s never the sense that anything about it is more than obligatory. It’s like badly conceived and poorly written fan fiction (although I’m not sure Doug is a big enough figure to inspire such a thing). Unlike most sequels, this one doesn’t exist because the first one made a ton of money but, whatever the underlying reasons for its genesis, the finished product is as extraneous as one made to satisfy a purely commercial need. Goon was a slight but enjoyable film. Last of the Enforcers is a waste of time, money, talent, and the goodwill of viewers who appreciated the earlier picture.