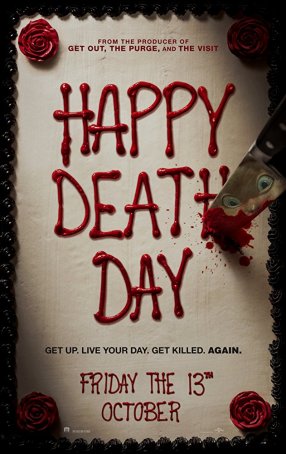 Applying the Groundhog Day premise to a horror movie is so obvious a conceit that I’m surprised it hasn’t been previously attempted. It’s a no-brainer. Unfortunately, director Christopher Landon and screenwriter Scott Lobdell have taken that phrase (“no-brainer”) too literally, liberally employing frontal lobotomies so that, in true horror film fashion, the actions of various characters sometimes make little sense and come from a place of minimal intelligence. By turns frustrating and tedious, this can sink even the most intriguing story.

Tree Gelbman (Jessica Rothe) is one of the Queen B(itch) sorority sisters. She wakes up on the morning of her birthday with a massive hangover in the bed of nerdy nice-guy Carter Davis (Israel Broussard). She’s mortified – if anyone finds out she slept with this dweeb, her reputation will be ruined. But she’s late for class and an extra-curricular assignation with a professor (Charles Aitken). By evening, she has been able to piss off a wide variety of people and ignore repeated calls from her father. Then, on her way to a party, she wanders into a dark area off campus and is murdered by someone wearing a creepy chubby baby mask. But, instead of ascending into the clouds or descending elsewhere, she wakes up again in Carter’s room on the morning of her birthday. Lather, rinse, repeat. If you’ve seen Groundhog Day, you know where this is going. The filmmakers openly reference it. (“Hey, this sounds like Groundhog Day. You know, the movie with Bill Murray. What do you mean, you don’t know who Bill Murray is…”) 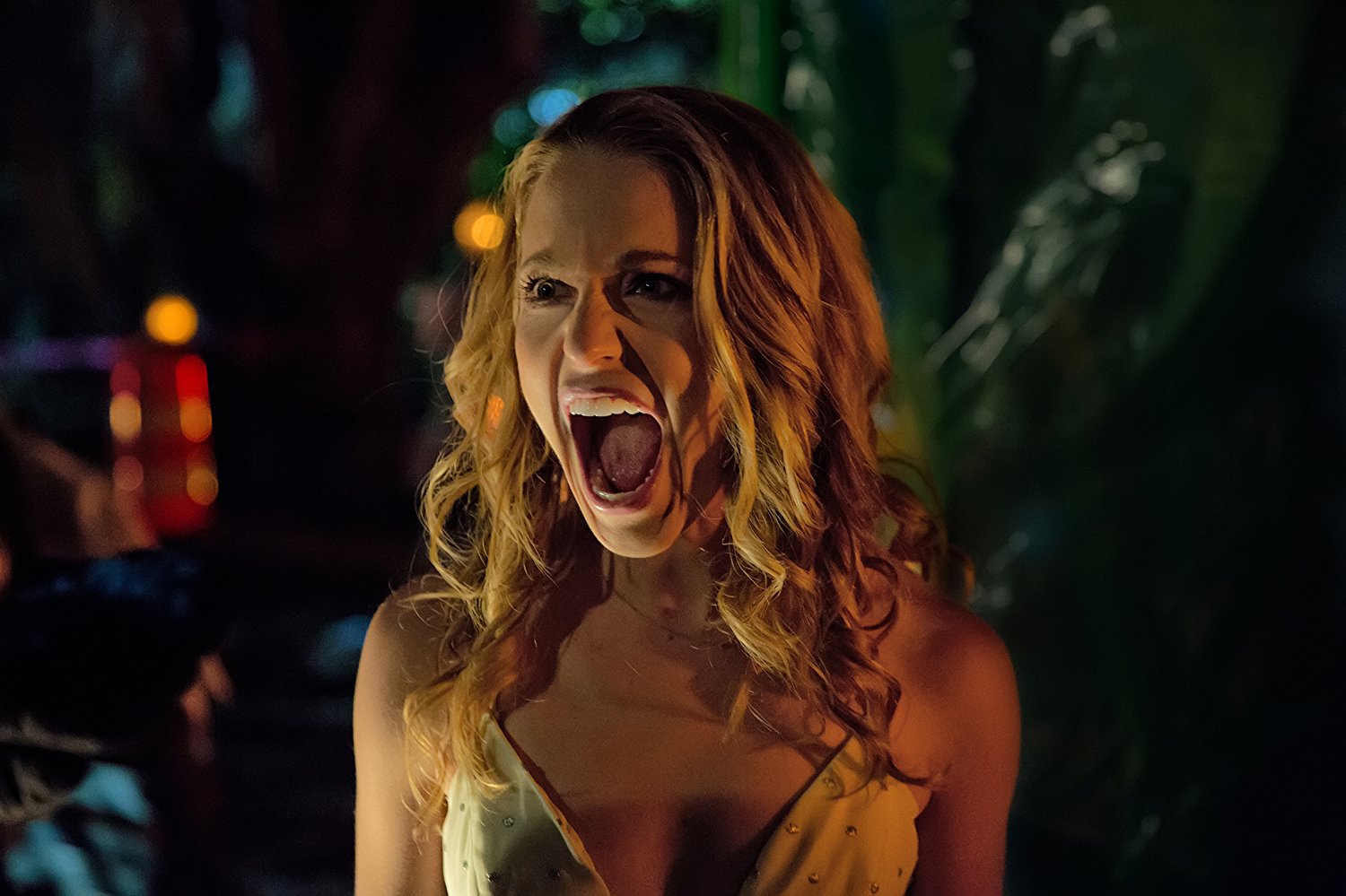 The film’s first half-hour is entertaining. It consists of the set-up and the first repeat. We get to see how things play out mostly the same but with slight variations while Tree struggles with what she thinks is a massive case of déjà vu. After that, however, the contrivances mount and Tree’s actions become increasingly inexplicable. After a few deaths, she concludes that the way to stop the repetition is to avoid being murdered. So does she take all the obvious steps, like staying with a group of friends or carrying a big knife or any number of other things that would reduce the possibility of her being filleted like a fish? Or, as a last resort, does she try to rip off the mask so she’ll know her assailant next time around? No and no. Instead, she does things like strip naked and strut across campus or spy on possible suspects to eliminate them from her list. The deaths become repetitious so Landon opts for a montage and, during the montage, he turns up the comedic aspect.

There is a minor twist to the Groundhog Day scenario. In the 1993 classic, Murray’s character lived his single day thousands of times. Here, the number of iterations is in the low double digits and can’t rise asymptotically toward infinity because every time Tree dies, she becomes weaker. She postulates she’s like a cat with nine lives. 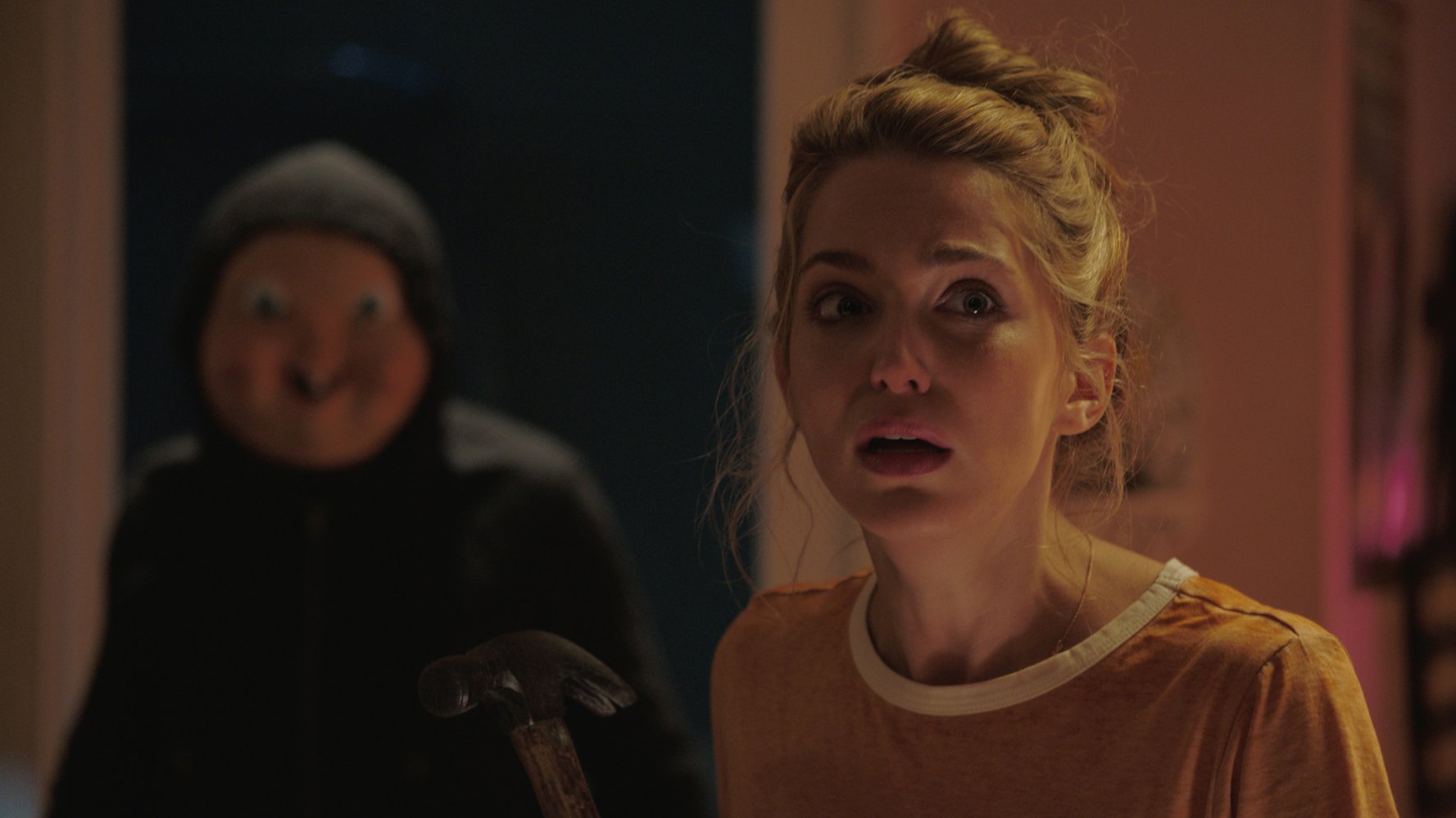 This isn’t traditional horror. There are few jump-scares and the murders are neither graphic (the rating is PG-13) nor frightening. As I said, some are played for laughs. The killer’s mask falls considerably short of Pennywise the clown’s costume in terms of its ability to raise the viewer’s hackles. The movie might be more appropriately described as a thriller or a dark fantasy than a horror movie. The Blumhouse seal of approval, however, places it firmly in the genre where it’s most likely to sell tickets.

Happy Death Day is about 90 minutes long and, past the first half-hour, every minute is dumber than the one before it. By the end, things have become so preposterous that it’s difficult to care about any of the (stupid) characters or how they get out of their situation. The movie’s attempts to develop a dramatic backstory for Tree and start a romance between her and Carter aren’t effective because we don’t respect her character. Her every action is artificial, the result of sloppy screenwriting.

Before I Fall, a movie that came out earlier this year, also underutilizes the Groundhog Day premise but, compared to Happy Death Day, Before I Fall offers a brilliant re-interpretation. However, because Happy Death Day rewards lazy, inattentive viewing, it will probably do quite well with young audiences who prefer not to be challenged by unconventional narrative developments or plots that require introspection and analysis. This is yet another example of why chilling, thoughtful horror is an endangered species.