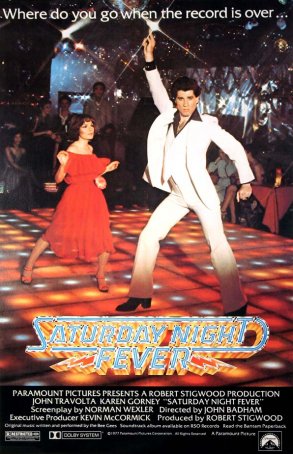 Many movies look much different when watched years after their release but few have aged in quite the way that Saturday Night Fever has. When the movie first debuted in the winter of 1977, it rode the rising tide of disco to the top of the box office then fed back into the phenomenon. There’s a reason Saturday Night Fever is regarded as emblematic of disco – because, while it didn’t invent the short-lived dance craze, it captured it in a way no other film (narrative or documentary) has done and, by doing so, enhanced its popularity.

It would be disingenuous to write that Saturday Night Fever is only about disco although, 40 years after its initial release, the nostalgia-steeped dance scenes are the most effective. At the heart of the film is an age-old tale about the aimlessness of an unfocused life. John Travolta’s character, Tony Manero, is a ‘70s rebel without a cause. He’s an embodiment of Bruce Springsteen’s “Glory Days” except for him, his era is post-high school. He’s the king of the dance floor but his days are numbered and, when it’s not Saturday Night, the best he can do is work as a grunt in a paint store. 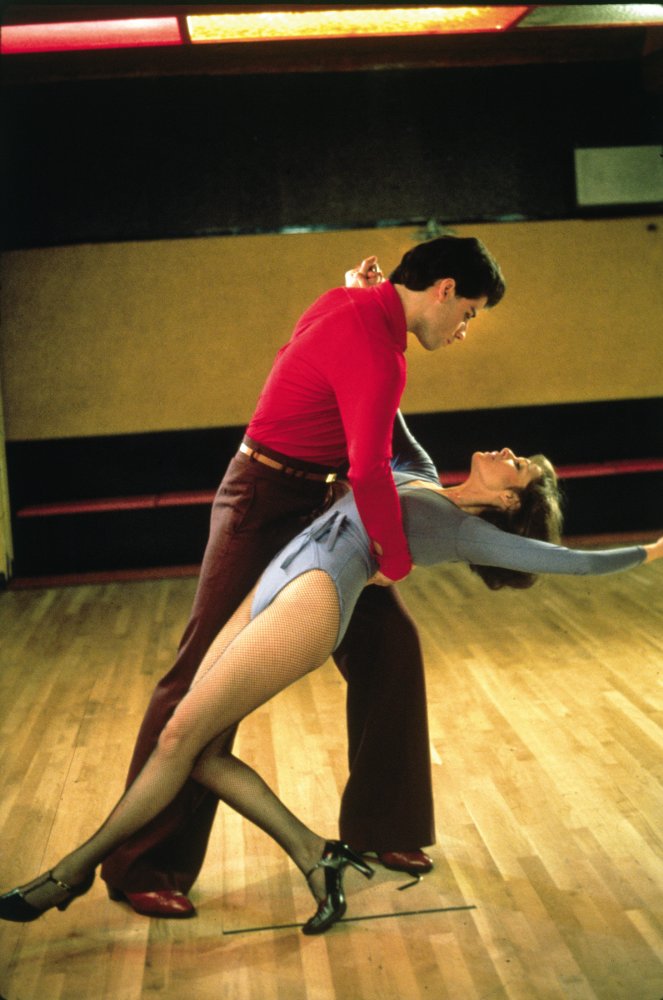 If not for its perfect encapsulation of a slice of life during the disco era, Saturday Night Fever might not be as strangely compelling as it is. The acting is at best so-so. The story, while it hits a nerve that many will relate to, is generic. The camerawork is interesting but not groundbreaking (although this was one of the first films to use the Steadicam). It all comes down to the music, the dancing, and the film’s ability to capture an era that flared brightly then faded quickly. If you didn’t live through the late ‘70s, Saturday Night Fever may be the closest you’ll get to an unvarnished depiction of them.

At the time he made Saturday Night Fever, director John Badham was a TV veteran but a big-screen neophyte. The success of this film allowed him to move on to other high profile projects – he would make Dracula (the Frank Langella/Laurence Olivier one), War Games, Short Circuit, and Stakeout in the next decade before cooling off and returning to television. As envisioned, Saturday Night Fever was never expected to be a breakout hit. It was perceived more as what would be a called an “indie” in later years – a low-budget, no frills look at the life of a disaffected young man whose existence is at a dead-end by the time he hits 21. The movie’s great fortune – its ability to surf a cultural wave – was more a factor of perfect timing than great filmmaking. The subsequent failed attempts to build on Saturday Night Fever’s initial popularity (a reworked PG-rated version and a horrific sequel, Staying Alive) show how crucial the late 1977 release date was to the production’s incorporation into the pop culture lexicon. The anti-disco movement (that culminated on the July 12, 1979 Disco Demolition Night) was already building as early as a year after Saturday Night Live’s release. 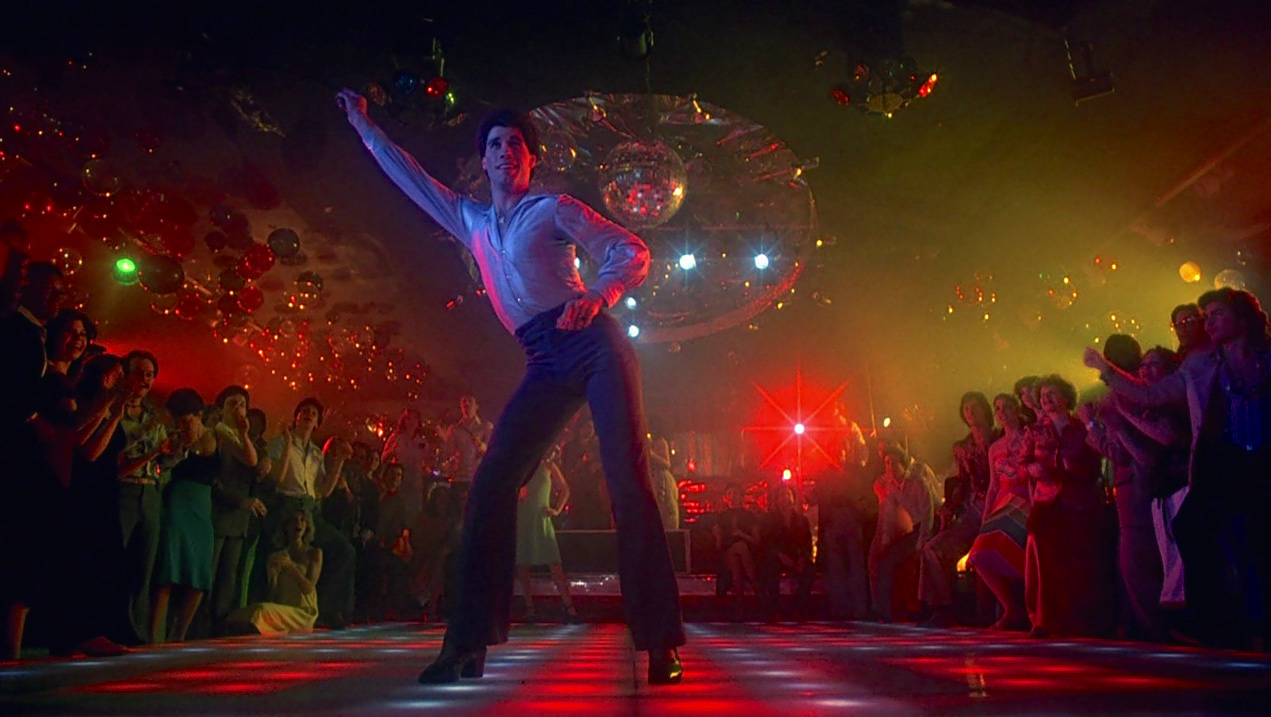 Outside of the music, the movie’s draw was its leading actor, John Travolta. At the time, Travolta was immensely popular as Vinnie Barbarino, the twenty-something high school student in “Welcome Back, Kotter.” Saturday Night Fever only added to his fame, at least short-term. Like disco, however, Travolta’s early career was a flash-in-the-pan. Following hits with Saturday Night Fever, Grease, and Urban Cowboy, he faded into obscurity until Quentin Tarantino rediscovered him. Under Badham’s direction, his acting is adequate but his physicality and dancing ability are amazing. Watching him bend, strut, and gyrate to the music of the Bee Gees is an almost surreal experience. As cheesy as all the moves may seem to our jaded eyes, it’s apparent that Travolta does them perfectly, without a hint of condescension or awkwardness, and it’s easy to understand why anyone in the disco culture might have become enraptured by this. Travolta’s performance reflects the character he plays: he lights up when he’s on the dance floor and fades when away from it.

To fill out the cast, the filmmakers went to the ranks of TV bit players and the results are about what one might expect from such a scavenger hunt. No one is particularly good or memorable and a few are actually pretty bad. Tony’s love interest and attempted rape victim, Stephanie, is played by then 32-year old Karen Lynn Gorney, didn’t make another movie until nearly 20 years after this one. Other members of the ensemble, like Donna Pescow (as Annette, the needy girl obsessed with Tony) and Barry Miller (as Bobby C., the boy who loses his footing on the bridge) had healthy TV careers but nothing memorable. Whatever Saturday Night Fever’s strengths, acting wasn’t among them.

Perhaps Saturday Night Fever’s biggest star was the soundtrack. The charting songs, all of which were composed by the Brothers Gibb, infected the radio airwaves from late 1977 through much of 1978. The soundtrack was ubiquitous. Three Bee Gee’s singles (“How Deep Is Your Love”, “Night Fever”, and “Staying Alive”) reached #1 on the Top 100 as did Yvonne Elliman’s “If I Can’t Have You” (which the Bee Gee’s wrote). Tavares’ “More Than a Woman” (another Bee Gee’s composition) reached #32. The movie also included a number of big, previously-released disco mainstays: the Bee Gee’s own “Jive Talkin’” and “You Should Be Dancing”, Walter Murphy’s “A Fifth of Beethoven”, and the Trammps “Disco Inferno”. 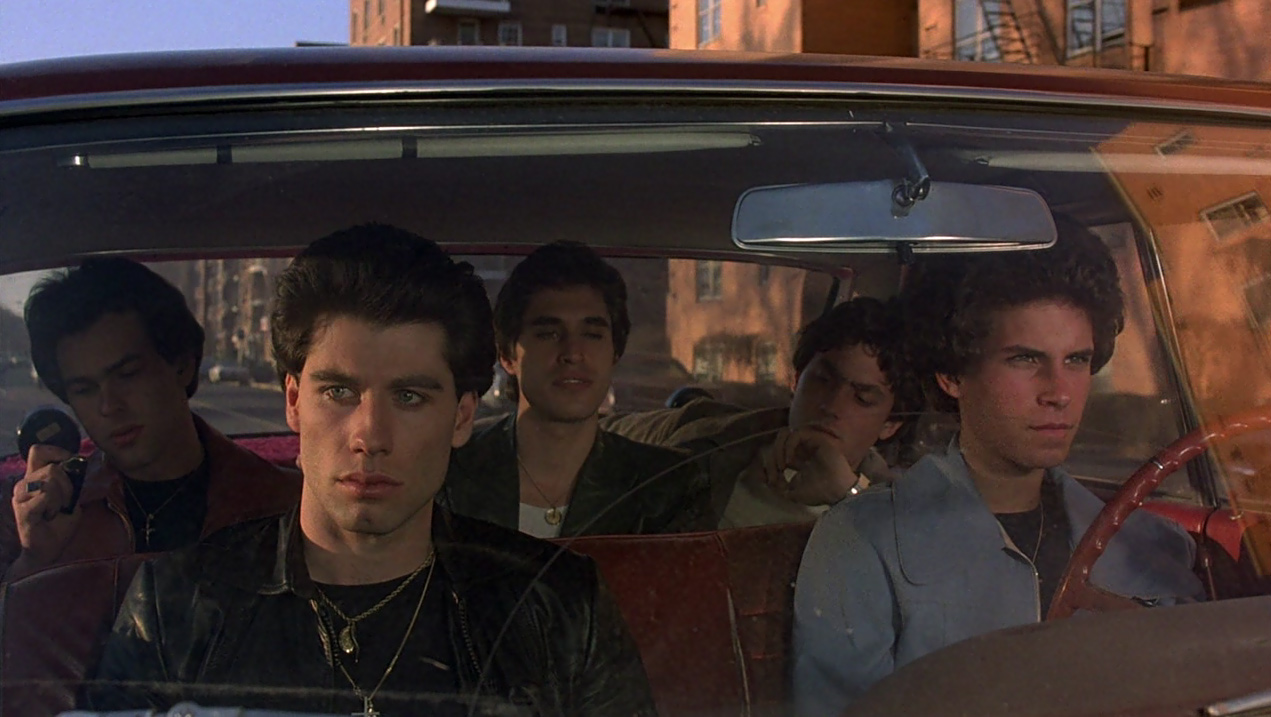 The story follows the exploits of Tony Manero (Travolta), a 19-year old Italian American living in Brooklyn. He bunks with his family and spends his 40-hour work week toiling away in a paint store. The one thing he looks forward to every week is Saturday night, when he and his friends saunter to the local disco club, 2001 Odyssey, where his is king of the dance floor. When the disco announces a dance contest, Tony initially agrees to partner with Annette, who is desperate for a relationship with him, but he eventually ditches her for the “classier”, older, and more adept Stephanie. As Tony and Stephanie practice, they form a tentative friendship. Tony wants to take this farther but Stephanie doesn’t. They win first prize but Tony doesn’t feel they deserve they trophy. Disillusioned, he tries to rape Stephanie but she escapes. He then joins his friends doing risky stunts on the Varazzano-Narrows Bridge. During these activities, one of Tony’s friends, Bobby C., loses his balance and his life. The movie concludes with Tony taking steps to get things together and re-connect with Stephanie as a friend.

A few of the subplots in Saturday Night Fever are more interesting than the main story. Tony’s brother, Father Frank (Martin Shakar), suffers a crisis of faith and decides to leave the priesthood. While this tale has been told many times, the fascinating aspect here is how the family reacts. In a close-knit 1970s Italian-American community like Bay Ridge, having a priest in the family is a badge of honor. When Frank decides to give up the collar, his parents are devastated – not because they’re afraid for his spiritual well-being but because his decision will smear their honor. They plead with him because of what it will mean for their reputation. This is something I can’t recall having seen addressed in any other film.

Saturday Night Fever’s approach to rape would almost certainly be criticized if it was released today. Although Tony’s attempted attack on Stephanie is unsuccessful (she fights him off), her decision to rebuild their friendship afterwards might be controversial in today’s climate. Annette is raped by two of Tony’s friends (although they would likely argue that it was consensual) in a scene that shows how little consideration was given to a woman’s dignity in some communities during the 1970s. Although Annette’s character is mostly an unflattering stereotype of a needy woman, the scene in which she is assaulted is deeply unsettling (in part because of the societal mindset it reflects). 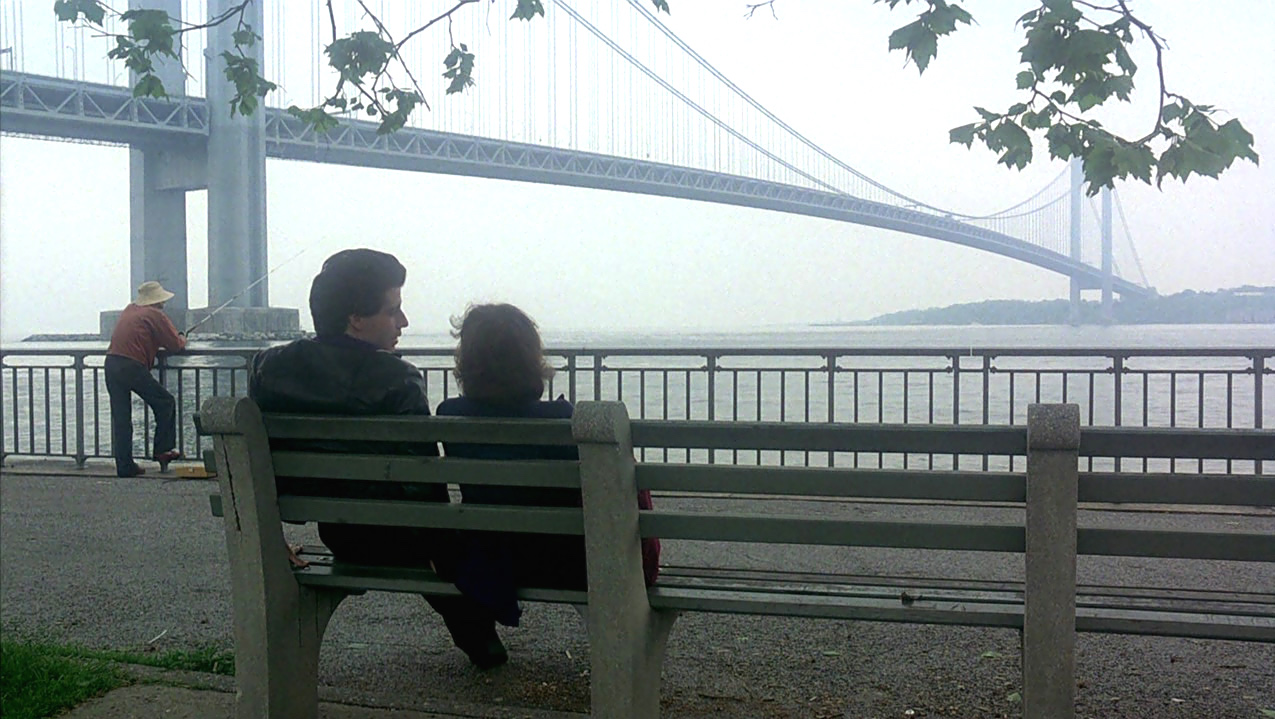 The movie also touches on themes of racial prejudice, in particular that of white Americans against Latino Americans. When one of Tony’s friends, Gus (Bruce Ornstein), is attacked on the street, he blames the Barracudas, a Puerto Rican gang. After a retaliation, Gus admits it might not have been the Barracudas but they were the “safest” targets. Later, when Tony and Stephanie win the dance contest, beating a Puerto Rican couple who are obviously better, it’s apparent that race is part of the reason for the result. Tony, recognizing this, gives the trophy to the Puerto Ricans. This is his “come to Jesus” moment.

Norman Wexler’s screenplay was based on a 1976 New York Magazine article written by British rock journalist Nik Cohn called “Tribal Rites of the New Saturday Night.” At the time, this was thought to be non-fiction but, in the mid-1990s, Cohn admitted that, although he had studied the nightlife in Brooklyn, he didn’t understand the subculture and made the whole thing up, combining his observations of 2001 Odyssey with someone from his youth in Derry, Ireland.

Stylistically, Saturday Night Fever is more unpolished than one might assume from the frequently regurgitated dancing clips. Badham’s gritty approach reflects that of other emerging ‘70s directors like Martin Scorsese, Sydney Lumet, and John Avildsen. This aesthetic, which was in part derailed by the success of Star Wars and the rise of the blockbuster, was prevalent in many mid-to-late 1970s films, including Saturday Night Fever. The streets are presented as squalid and dirty and the people who live there as creatures of their habitat. The contrast between grim reality and the neon fantasyland of 2001 Odyssey gives Tony’s weekly escape a sense of immediacy and urgency. 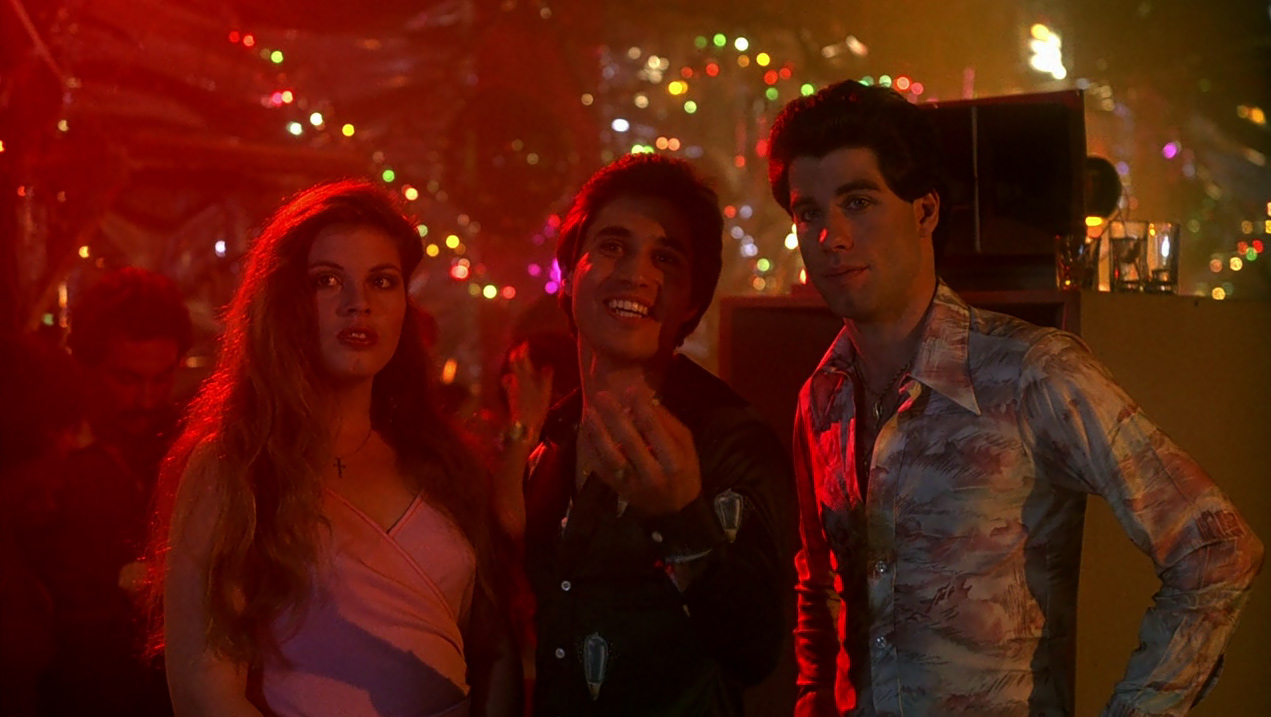 Over the years, nearly everyone has become familiar with the music of Saturday Night Fever. The album sold 40 million copies and the songs received almost constant airplay during their year-plus of chart dominance and have endured enough to be recognizable to those born years (or decades) later. For those familiar with the movie only through its soundtrack, however, a darker experience awaits. Saturday Night Fever is more unsettling urban drama than peppy dance-based musical. Yes, the disco is in its DNA but Badham was striving for something starker. The film’s inherent (and fascinating) contradiction is perhaps best exemplified by “Staying Alive.” The song, probably the best-known of Saturday Night Fever’s #1 tunes, has a danceable, throbbing beat. The words, however, include phrases like “I've been kicked around since I was born” and “Life goin' nowhere, somebody help me”.

In 1977, Saturday Night Fever was a portal into a segment of society that many viewed with a mixture of bemusement and perhaps alarm. Today, it’s a perfect time capsule that gives a real sense of what it was like to breathe the air of a recognizable yet wholly different New York City. The film is far from perfect but it’s easy to understand why it was Gene Siskel’s favorite film and why is was determined to be "culturally, historically, or aesthetically significant" by the Library of Congress and chosen for preservation in the National Film Registry.