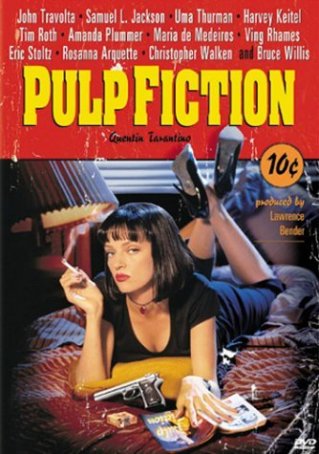 "The path of the righteous man is beset on all sides by the inequities of the selfish and the tyranny of evil men. Blessed is he who in the name of charity and goodwill shepherds the weak through the valley of darkness, for he is truly his brother's keeper and a finder of lost children. And I will strike down upon thee with great vengeance and furious anger those who attempt to poison and destroy my brothers. And you will know my name is the Lord when I lay my vengeance upon thee." - Jules' version of Ezekiel 25:17


The danger of having as successful and explosive a debut as Reservoir Dogs is that expectations are invariably high - sometimes unrealistically so - for the follow up. Quentin Tarantino, however, has managed the near-impossible: improve upon the extraordinary. Pulp Fiction shows what can happen when a talented and accomplished filmmaker reaches his apex.

This film is one wild ride. An anthology of three interconnected stories that take place in a modern-day Los Angeles tinted by echoes of Dashiell Hammett and Raymond Chandler, the movie impresses in every possible way. Writer/director Tarantino has merged film noir with the gangster tale and pulled them both into the '90s. As definitive as Francis Ford Coppola's Godfather saga was for the '70s, so is Pulp Fiction for today's generation.

Pulp Fiction's three tales are structured to intersect and overlap at key points, even though they are not presented in chronological order. Tarantino arranges his initial scene to dovetail with his final one in a remarkable example of closure. Those confused by the structure will see everything clearly once the final line is spoken.

"Vincent Vega and Marsellus Wallace's Wife" is the first story. It opens with Vincent (John Travolta) and Jules (Samuel L. Jackson) out on a hit for their boss, Marsellus (Ving Rhames). Along the way, Vincent confesses that he's uneasy about an upcoming job - taking out Marsellus' young wife Mia (Uma Thurman) while the main man is out of town. The source of the nervousness lies in a story circulating that Marsellus had a man thrown out a fourth story window for giving Mia a foot massage. One wrong step and Vincent could find himself in deep trouble.

"The Gold Watch" is about a boxer, Butch (Bruce Willis), who is handsomely paid by Marsellus to throw a fight. Only at the last moment does it become more profitable to renege on the deal. So, along with his French girlfriend, Fabienne (Maria de Medeiros), Butch goes on the run, hoping to live long enough to spend some of the fortune he has suddenly gained.

"The Bonnie Situation" ties together a few loose threads. It also introduces Harvey Keitel as a suave problem-solver named Wolf and Quentin Tarantino as Jim, a man worried that his wife will come home from work to find a dead body in a blood-spattered car in his garage. Sometimes, it appears, helping out Marsellus is not without its complications.

As was the case in Reservoir Dogs, Tarantino's crisp dialogue sparkles. The vulgarity-laced monologues and conversations ripple with humor and are ripe with points to ponder. Foot massages, hamburgers, comfortable silence, a gold watch, pot bellies, divine intervention, and filthy animals - all these and more receive the writer's attention as he presents meaningless issues in an intensely-fascinating and almost lyrical fashion. Who else (except perhaps David Mamet) can make profanity sound so poetic?

For anyone who thought they knew the breadth of Bruce Willis' and John Travolta's acting ability, a surprise awaits. Whether it's an effect of the script, the direction, or something else, these two turn in surprisingly strong performances. And they're not the only ones. Uma Thurman, Rosanna Arquette, Ving Rhames, Harvey Keitel, Tim Roth, Amanda Plummer, Eric Stoltz (who has a Tarantino-related triple play with Pulp Fiction, Killing Zoe, and Sleep With Me), and the director himself are all excellent. And then there's Samuel L. Jackson, who seems to get better with every outing.

All the details are executed to perfection. Ironies abound in the smallest situations. One death is caused by, of all things, a poptart. And it takes a director of rare talent to find the comedy in so many macabre situations. This goes beyond gallows humor. Mixing the original with the derivative, Tarantino pushes Pulp Fiction in directions that are equally anticipated and unexpected.

Relentless in its pace, Pulp Fiction is as exhausting as it is exhilarating. In between all the shootings, Mexican standoffs, and other violent confrontations exist opportunities to explore various facets of the human experience, including rebirth and redemption. With this film, every layer that you peel away leads to something deeper and richer. Tarantino makes pictures for movie-lovers, and Pulp Fiction is a near-masterpiece.