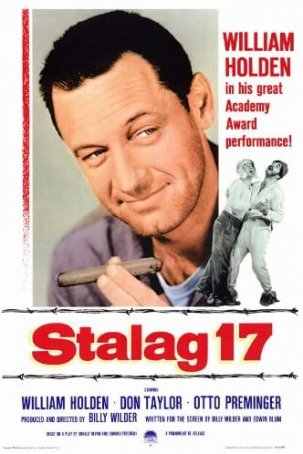 There was a time when it was considered "daring" or "risky" to make a comedy-tinged war movie. In the early 1950s, with the scabs from World War II still in evidence and the United States enmeshed in Korea, war didn't seem to be a lighthearted matter. Who better to buck the trend than Billy Wilder, who reworked a play by Donald Bevan and Edmund Trzcinski, and brought it to the screen over the worries and objections of some studio executives? Wilder's instincts, as was often the case, were correct. Stalag 17 was so popular that not only was it a hit at the box office but it spawned the TV series knock-off Hogan's Heroes.

One could make an argument that, among 20th century directors, few were more versatile than Billy Wilder (other names in that category might include Charles Chaplin and Steven Spielberg). Wilder, a Viennese Jew who fled to the United States to escape the rising scourge of Nazism during the early 1930s, became one of Hollywood's hot directors, and there was seemingly no genre he couldn't conquer. Double Indemnity is viewed as one of the great film noirs. Sunset Blvd. is seen as the ultimate insider's look at Hollywood. Some believe Some Like It Hot is the best comedy of all time. And few romantic comedy die-hards won't swear by Sabrina. Stalag 17 is vintage Wilder, from its smart dialogue and top-notch acting to its engaging storyline. The film so deftly weaves together its disparate elements that fans for years have argued whether it's a war drama with comedic overtones or a comedy with dramatic overtones. Whatever the case, there are plenty of laughs and heartfelt moments in the film, and many feel it offers one of the most accurate representations of a German prisoner of war camp ever to reach the screen. 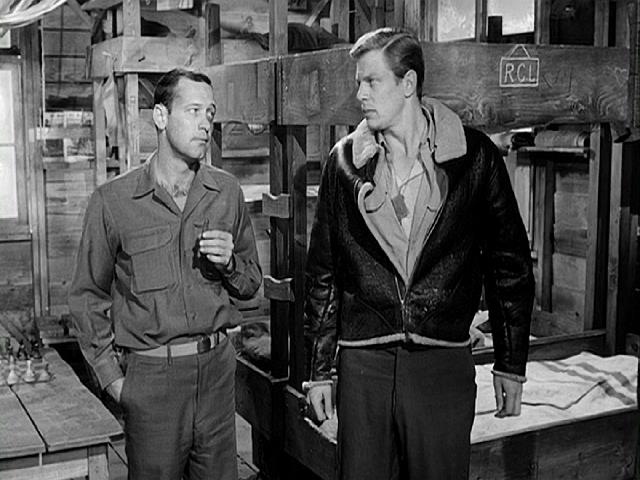 The action takes place entirely within Stalag 17, a German POW camp. We are introduced to a number of the internees: Sefton (William Holden), the cynical operator of the building's black-market "department store;" Price (Peter Graves), the good-looking "security" officer, who keeps his fellow prisoners in line; Hoffy (Richard Erdman), the "barracks chief;" Animal (Robert Struass), who has an obsession with Betty Grable, and his best friend, Harry Shapiro (Harvey Lembeck); and Joey (Robinson Stone), a mute suffering from post-traumatic stress syndrome. Then there are the Germans, including the cruel and implacable Col. Von Scherbach (Otto Preminger) and his aide, the seemingly good-natured Sgt. Schulz (Sig Ruman).

Escape is a common consideration among POWs in any war movie, and Stalag 17 is no exception. But the men in this film face a challenge: no matter how well they plan an excursion, the Germans are always one step ahead. The realization is inescapable: there is a spy in their midst. At first, the prisoners single out Sefton: he's a loner and opportunist who seems too chummy with Schulz and his cohorts. However, after being beaten for his complicity, Sefton uncovers the identity of the real rat, but this poses a dilemma: how, when, and to whom should he reveal the truth and, if he does, will anyone believe him? 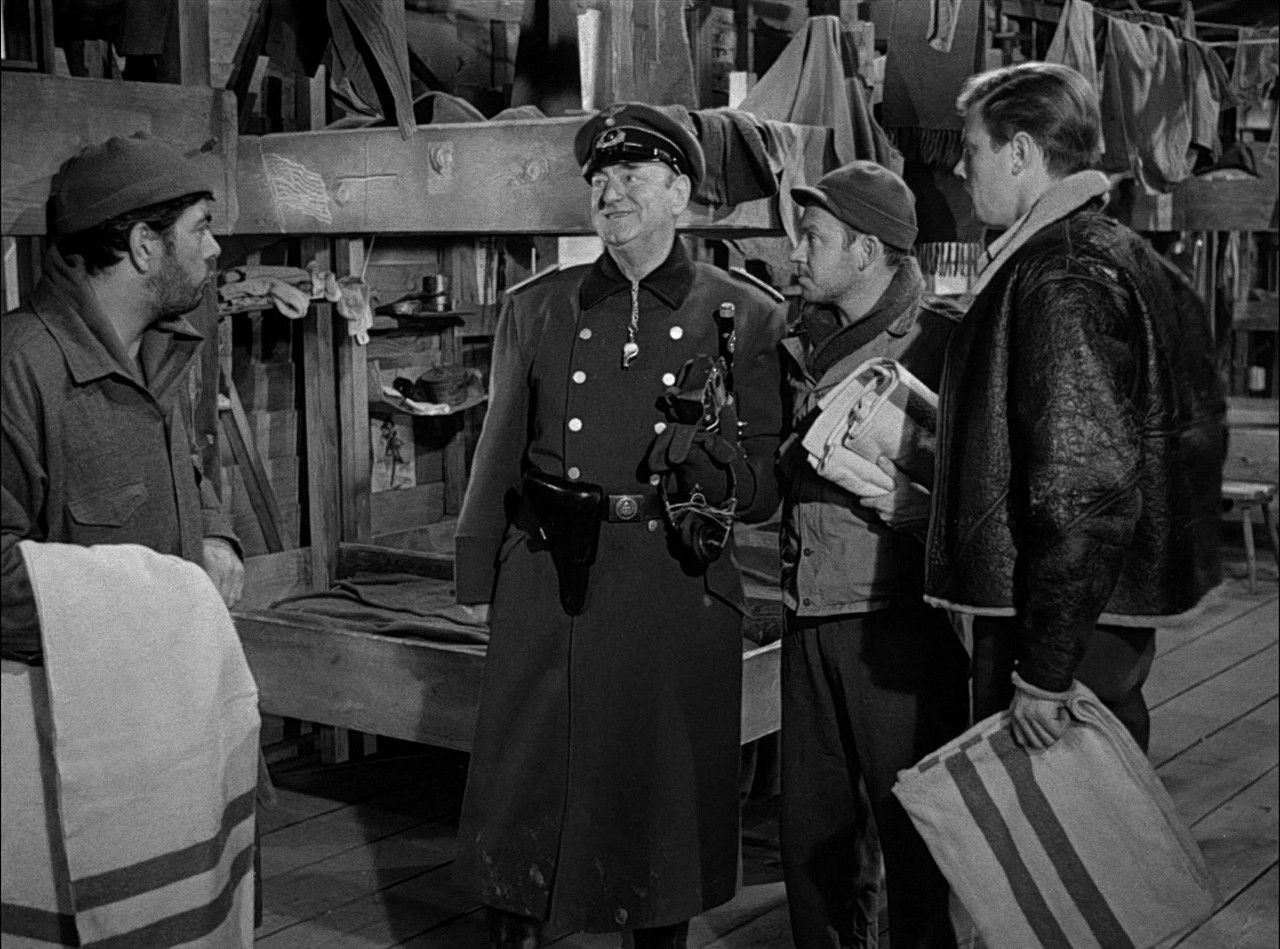 The film is effectively partitioned into two sections, both of which are handled with equal skill by Wilder. There's an element of mystery in the first half, with the audience, like the POWs, wondering about the identity of the spy. Sefton is established as the obvious red herring – too obvious, in fact, for us to consider him as a serious candidate. The second half of the film delves into ethics. Once Sefton learns the identity of the culprit, how does he use that information? For personal gain? To help save American lives? And when is the best opportunity to reveal it?

As is true of nearly every Wilder film, Stalag 17 is beautifully written, with sharply realized dialogue. There's a lot of humor in the film, only some of which is of the gallows variety. For the most part, as in Robert Altman's M*A*S*H, the humor fits organically with the serious material, so it doesn't seem out-of-place. The possible exception of this is the "courtship" at the Christmas dance between Animal and Shapiro, who is cross-dressing (not the last time a cross-dresser would appear in a Wilder film). The scene feels awkward, possibly because Wilder had to be careful how it was crafted to avoid falling afoul of the Hays Code.

The cast, comprised mainly of character actors, works well because there are good moments for each of the performers. Robert Strauss received a Best Supporting Actor Oscar nomination for his larger-than-life portrayal of Animal (he didn't win). William Holden, whose Sefton is by far the most interesting character in the film, won the Best Actor award – the only one he would win in his career. The victory was marred, however, since many felt Holden was given the Oscar as compensation for being passed over three years earlier for Sunset Blvd. Interestingly, Holden was not Wilder's first choice for Sefton, but Charlton Heston was not available. 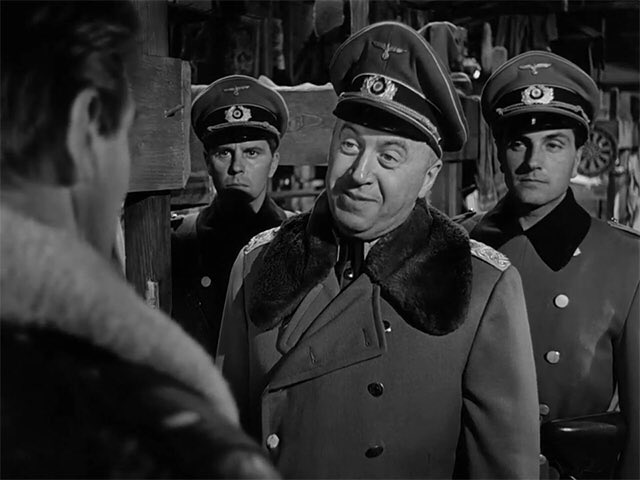 Perhaps the most interesting casting choice was Otto Preminger, the director of such films as Laura and Anatomy of a Murder. Wilder felt that Preminger's imposing presence would provide the Nazi commander with an air of authority. This was not Preminger's first outing in front of the camera, but it was by far the best known of his career. Apparently, there weren't many conflicts between Wilder the director and Preminger the actor, although the latter was known to call "Cut, print" at the end of his scenes.

Stalag 17, despite often being labeled as one of Wilder's "lesser" films, is a bona fide classic, and an example of how an accomplished director can meld many elements into a workable whole. Only a few filmmakers would have the chutzpah to try setting a comedy in a POW camp (especially less than ten years after such camps had existed); fewer still would be able to succeed. Whether you want to laugh, meditate on the folly of war or the vagaries or heroism, or be entertained by solid storytelling with well-developed characters, Stalag 17 offers what you're looking for. Many war films claim they can be enjoyed by "those who don't like the war genre;" Stalag 17 actually fulfills that statement.