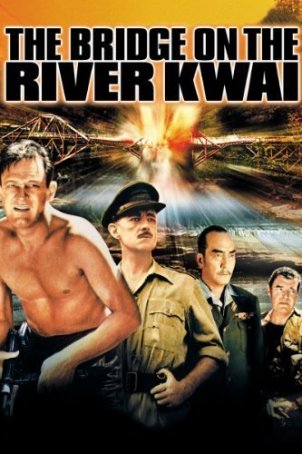 Although it's certainly a matter for argument, many cineastes consider David Lean to be one of the ten best directors of lavish epics. Although several of Lean's most accomplished movies were made while he was based in the U.K., they nevertheless possess a Hollywood-like texture. Lean also didn't believe in pinching pennies. Despite having generous financial backers, many of Lean's films came in late and overbudget. Viewing pictures like The Bridge on the River Kwai and Lawrence of Arabia, however, it's hard to find fault with the director's extravagant sensibilities.

Debates could rage for hours about which title on his resume represents Lean in top form. The Bridge on the River Kwai and Lawrence of Arabia both won Lean Best Director and Best Picture Oscars, and the majority of critics would cite those as his best works. As good as both are, however (and they are very good) Bridge is a tighter movie, with a little more meat and less fat. Both get high marks when it comes to "spectacle." Both feature excellent acting, cinematography, and set design. There's not a lot to separate them, but I think The Bridge on the River Kwai is the better movie.

It's a war film that's less about battles and fighting than about the madness that surrounds those events. No human endeavor is more effective than war at turning morality, judgment, and sound thought upside down. All kinds of madness are on display in The Bridge on the River Kwai - the madness of a commander who defines collaboration with the enemy not as treason, but as honorable; the madness of a soldier who accepts a suicide mission to return to the prison from which he escaped; and the madness of a struggle that strangles humanity and forces men to make harsh, inexplicable choices.

The Bridge on the River Kwai takes place in 1943, in a Japanese prisoner of war camp in Burma. The Allied soldiers (primarily British) who are brought here are expected to work for the Japanese building a bridge over the Kwai, which will be a critical piece to a railroad designed to connect Malaysia with Rangoon. Everyone is expected to perform manual labor - both the enlisted men and the officers. The commander of the camp, Colonel Saito (Sessue Hayakawa), does not believe that the men who forced their troops to surrender should be absolved of heavy work. British Colonel Nicholson (Alec Guinness), a stiff-upper-lip, old school soldier, disagrees. He points out to Saito that making officers perform manual tasks is forbidden by the Geneva Convention. Saito scoffs at this, and throws Nicholson in "the oven," a tiny tin shack that bakes in the sunlight. The standoff between the two continues for days and weeks until Saito comes to the realization that he needs Nicholson's cooperation if the bridge is to be built by the target date. (If it isn't, Saito will be honor-bound to commit hari-kari.) Nicholson is granted amnesty and released, and begins working on the bridge with fervor. He believes this to be an excellent way to whip his troops back into shape and show the enemy what good British efficiency can produce. He ignores the thorny issue of whether building the bridge is abetting the enemy.

The second "prong" of the movie concerns Major Shears (William Holden), an American who escapes from the camp shortly after Nicholson's arrival. Despite nearly dying more than once, he makes it to safety, and is nursed back to health at a British outpost. While there, he is "invited" to return to the camp as part of a commando squad led by Major Warden (Jack Hawkins). Shears, although less than enthusiastic about the assignment, agrees, and soon he, Warden, and several others are on there way into the jungles of Burma, setting out to destroy the bridge on the river Kwai that Nicholson is building.

The sequences featuring Holden exist to add a little adventure to the proceedings (and, in the case of the beach scenes, sex appeal). These segments were not in Pierre Boulle's novel, and represent a compromise made by Lean to increase the movie's worldwide appeal. Fortunately, they strengthen, not dilute, the finished product. The producers insisted that there had to be a "name" American in an important role, so Lean capitulated. (In an interview after the film's release, Boulle reportedly remarked that, although the material centered around Shears was not in his book, he wished it had been. He thought it made a great addition.) The real meat of the movie, however, takes place in and around the Japanese prisoner camp, making mad Colonel Nicholson the central figure. (The film's detractors object to the "soft peddling" of Japanese tactics when dealing with captives, but no purpose would have been served by demonizing the Japanese and making Saito any more cruel than he is. The point is for him to be a character, not a monster.)

There's something Lear-like about Nicholson. He is stubborn, intractable, and intelligent. His battle of wills with Saito - a titanic struggle that Nicholson wins because he has less to lose than his opponent - is the most compelling aspect of The Bridge on the River Kwai. Nicholson is willing to allow men under his command to die so he can prove a point. It has been said that only an insane man will not break under torture, and Nicholson will not break.

There is a perverse, twisted logic in his reasoning about why his men should do the best job possible in building the bridge. It's a matter of pride and ego. Not, as he puts it, the British army's pride, but his own. Nicholson intends for the bridge to be his legacy. His initial motives for doing the work are genuine (although he fails to see the larger picture), but, during the course of construction, the bridge becomes an obsession. Only at the end, after he has effectively sabotaged his own people's attempts to destroy the monument to his ego, does he have a moment of lucidity. "What have I done?" he remarks. Seconds later, he loses consciousness and inadvertently depresses the plunger. Some may believe that Nicholson redeems himself through that action, but it's hard to agree with such a position, since he has lost consciousness. The fact that he destroys his own bridge while being unaware of what he is doing adds another layer to a climax that is rich with irony.

As is often the case with career-defining roles, Alec Guinness almost didn't play Nicholson. He repeatedly refused Lean's requests until finally being convinced during a sit-down dinner. Charles Laughton was the filmmakers' original choice, but he backed out as soon as he realized what the filming conditions were going to be. (Laughton was not a skinny man, and he didn't think he would be able to endure filming in such heat and humidity.) Guinness is brilliant in the part, presenting Nicholson as fierce and indomitable, and showing that madness doesn't always result in a loss of control. We see the insanity around the edges, in the actions and the flawed reasoning, but never burning in the eyes. Guinness won his only Oscar for this part (although he was not on hand to receive it when it was handed out).

William Holden was another second choice, although his status as the #1 box office star in America made him a good consolation prize. (Originally, Cary Grant had been slated for the part.) Holden believed deeply in the project, and The Bridge on the River Kwai became one of his most memorable roles, even though it is essentially a supporting part. Holden is not the gung-ho adventurer in this film. He is a reluctant hero who eventually fails at his assigned task. Although Holden did not receive an Academy Award nomination for the part of Shears, his work here stands along that of the three films for which he was nominated: Sunset Blvd., Stalag 17 (won), and Network.

The ever reliable Jack Hawkins plays Major Warden, who is, in many ways, the polar opposite of Nicholson. A character actor who was never accorded an Oscar nomination, Hawkins is the glue that holds together much of The Bridge on the River Kwai's second half. Warden gives Shears someone to play off of. Silent star Sessue Hayakawa (he was in more than four-dozen films between 1914 and 1924) earned a nomination for his portrayal of the cruel, inept Saito, whose confidence is shattered when he cannot break Nicholson.

The screenplay is now credited to Michael Wilson and Carl Foreman. Foreman wrote the original draft, which was deemed to be unacceptable. Wilson was then brought in to do an almost complete re-write. At the time of the film's release, neither name was on the print, since both writers were blacklisted. (The initial credit read "Screenplay by Pierre Boulle, based on his book," although Boulle had nothing to do with the adaptation.) Further complicating matters is that The Bridge on the River Kwai earned a screenplay Oscar. In 1984, the Academy redressed the injustice by awarding a posthumous Oscar to Wilson (who was dead) and Foreman (who died the day after the announcement was made). The restored version of the film appropriately credits the writers.

The movie, shot by Jack Hildyard (who earned an Oscar for his efforts), is gorgeously composed and photographed. As befits an epic of its standing, it is in widescreen color. The destruction of the bridge, which was captured by multiple cameras, couldn't be more impressive. Malcolm Arnold's score (another Oscar winner) effectively supports the action and visuals. Oddly, however, the best remembered music from the film is not by Arnold. Instead, it is the tune "Colonel Bogey March" (which the prisoners whistle near the beginning of the film as they enter the camp). The Bridge on the River Kwai catapulted that song from obscurity to world-wide awareness.

The post-World War II cinematic landscape is littered with big-budget movies about the conflict and the toll it took upon those who participated. Some of those pictures have become timeless classics and some are nearly forgotten. Few, if any, are as simultaneously thrilling, awe-inspiring, and tragic as The Bridge on the River Kwai. For director Lean, this represented a cross-roads between the more intimate, character-driven dramas of his early career and the glorious spectacles that marked his latter years. The Bridge on the River Kwai contains elements of both - the characters are well-drawn and the finale is astonishing - and is all the stronger for it. In my opinion, it is one of the two best films to emerge from a very strong decade of cinema.