Ben-Hur, arguably the most famous Bible-informed epic not to be made by Cecil B. DeMille, is a testimonial to how poorly many spectacles stand the test of time. In its day, Ben-Hur was seen as the ultimate in motion picture entertainment – a long, lavish fusion of action, adventure, melodrama, and Christian dogma. With a huge budget, a rugged leading man, and an appeal for those with an affinity for morality plays, Ben-Hur not only succeeded at the box office but was a darling of the 1960 Oscar ceremony. Yet the passage of the years hasn’t been kind to William Wyler’s blockbuster. While its grandiose visuals remain impressive and the chariot race has lost none of its energy and excitement, Ben-Hur is not only overlong and bloated but whole sequences, highlighted by Charlton Heston’s wooden acting, feel more like cheesy examples of self-parody than serious attempts at drama.

The movie opens with a prologue in which three Wise Men pay a visit to a certain manger. It then skips forward a quarter-century and introduces the film’s main players: Judah Ben-Hur (Heston), an affluent and influential Jewish prince living in Jerusalem, and his childhood best friend, Messala (Stephen Boyd), who has been assigned by Rome to keep order in the city in advance of the arrival of a new governor. Everyone, including Judah’s mother, Miriam (Martha Scott), and sister, Tirzah (Cathy O’Donnell), is delighted about Messala’s return but things start going downhill quickly. Judah’s refusal to spy for his old friend creates friction and, when an accident that nearly kills the governor is traced to Judah’s household, Messala exacts retribution. Judah is pressed into service as an oarsman for a Roman warship and Miriam and Tirzah are sent to prison. 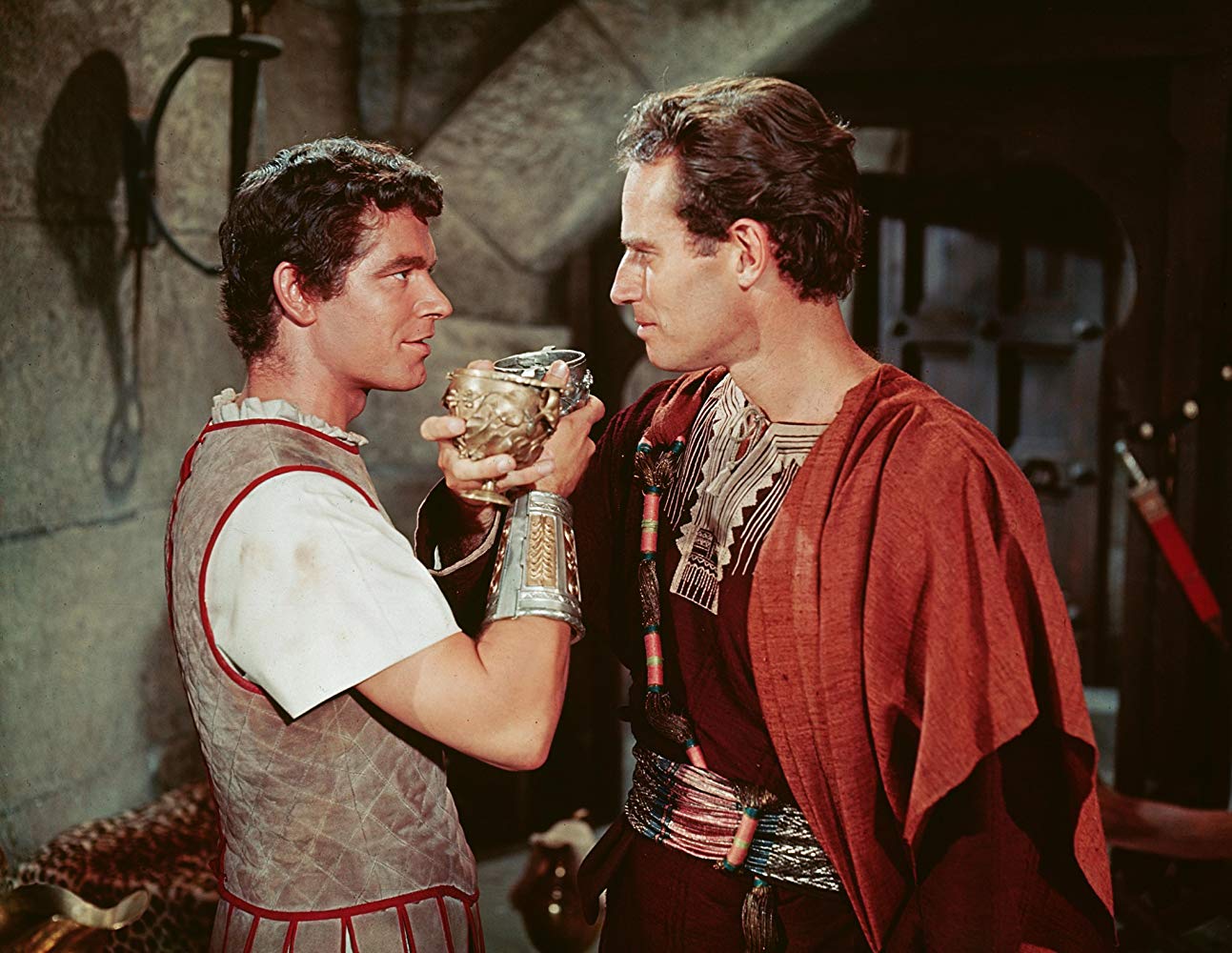 For three years, Judah nurses his grudge until fate provides him with an opportunity. During a fierce naval battle, he saves the life of the ship’s commander, Quintus Arrius (Jack Hawkins), and is given an opportunity for freedom and redemption. He uses this to return to Jerusalem, where he is reunited with his love, Esther (Haya Harareet), who tells him everything that has happened during his absence. He confronts Messala about his sister and mother. When he erroneously believes they died in prison (in actuality, after contracting leprosy, they were exiled), he agrees to represent Sheik Ilderim (Hugh Griffith) in a chariot race against the four-time reigning champion: Messala. The final act of the friendship-turned-bitter is played out in front of thousands.

All these years later, the chariot race remains Ben-Hur’s crowning achievement. A massive undertaking that required the contributions of director Wyler and several second-unit assistants (including, among others, Sergio Leone), actors Heston and Boyd, and various stunt-men, this ten-minute sequence remains unchallenged as one of the most memorable races in the history of cinema. There’s tension and suspense as the horses race around the track with various participants falling by the wayside (and being quickly dragged off to the sidelines) as each lap passes. The cuts between close-ups of Heston and Boyd and long-range shots of their stunt doubles are seamless. Filmed on a full-scale live set in front of a large audience, there’s an authenticity that computer-generated facsimiles cannot capture. 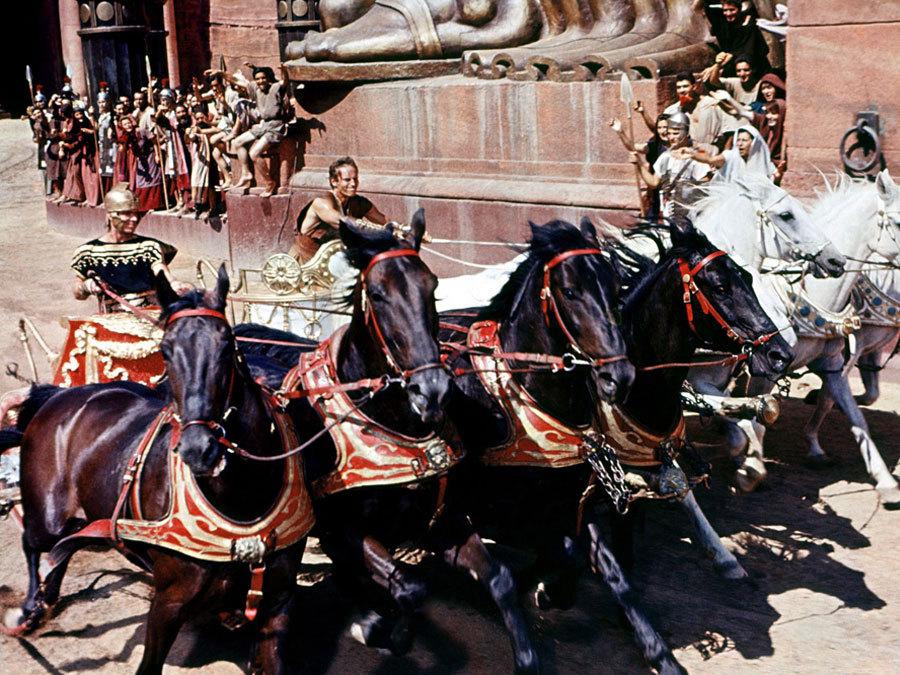 Not all of Ben-Hur’s set pieces are as effective. The naval battle, which features a lot of model work, is unconvincing. In 1959, it may have been impressive, but special effects have advanced too far for it to be passable by today’s standards. Likewise, a chase early in the film where Judah evades his captors in an effort to challenge Messala is worthy of The Three Stooges.

The problem with the chariot race is that it represents the emotional climax of the film and its resolution closes the book on the central conflict. Unfortunately, this all happens by the 190-minute mark – more than 30 minutes prior to the film’s conclusion. Ben-Hur spends its final half-hour forcing viewers to endure an artificial conversion as Judah bears witness to Jesus’ crucifixion and has his life changed as a result. Although Jesus makes several “cameos” during the main narrative, the last-act change in focus is awkward even though the character’s transformation from angry firebrand to pacifist is the point of the story. 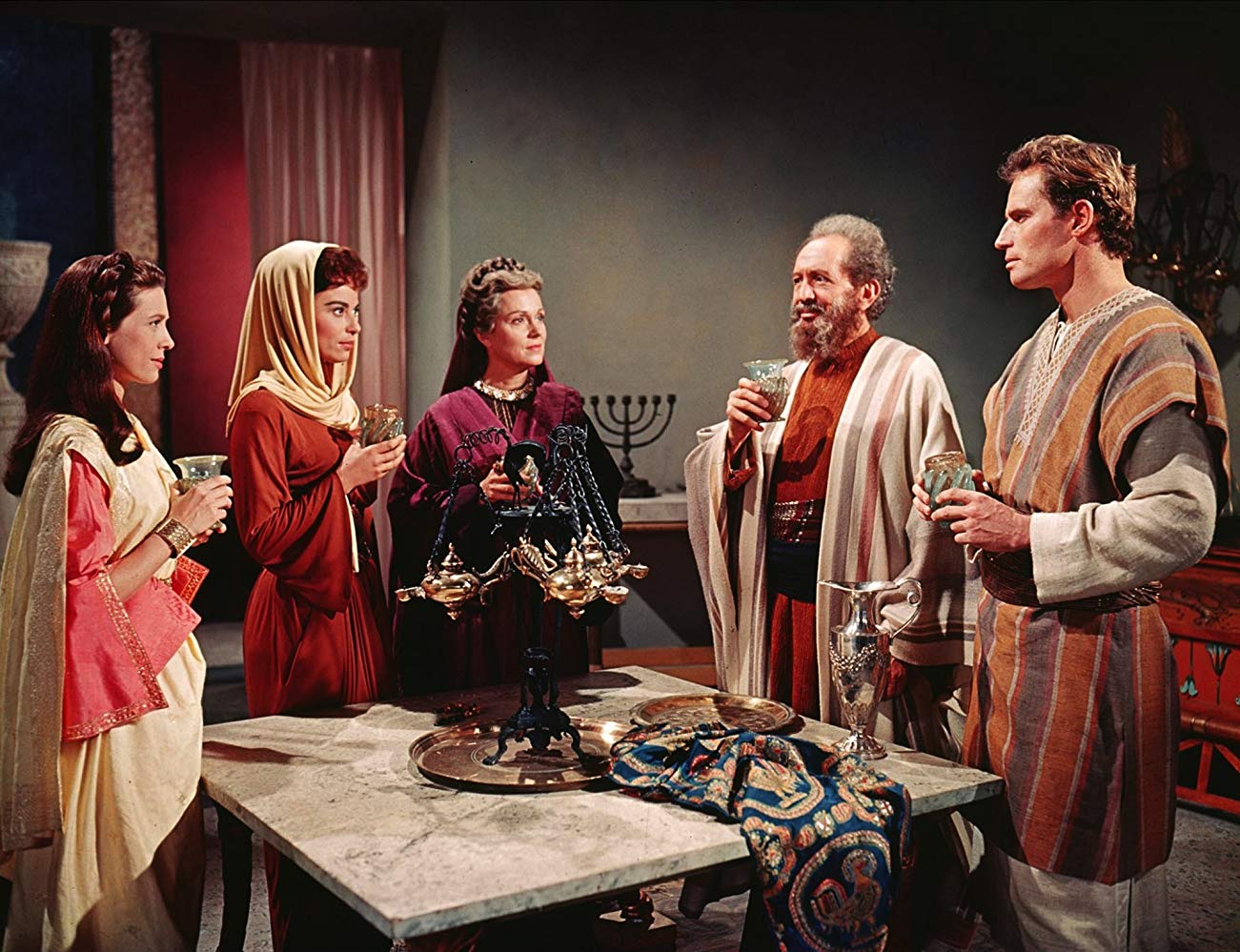 Ben-Hur marked the second time Charlton Heston appeared in big-budget “Bible movie” (the other being, of course, The Ten Commandments). During this era, Heston was one of the go-to actors for “manly” roles. His box office clout, combined with his willingness to endure the physical deprivations of long, arduous shoots, made him a natural for epics. As much as he might look the part, however, Heston’s acting range was always a question mark. Not the most emotive of performers, he often seemed like part of the scenery (although an impressive part, without a doubt). In Ben-Hur, he’s very good in scenes that require masculinity and machismo but less certain when he’s expected to deliver dialogue, express deep emotion or (god forbid) do something romantic. His chemistry with Haya Harareet never extends beyond deep, meaningful stares. As Messala, Stephen Boyd brings verve and energy to the part, although it’s too bad his character was scrubbed of all redemptive qualities and turned into a standard-order bad guy.

Then there’s the case of Hugh Griffith, who won a Best Supporting Oscar for his role as Sheik Ilderim. In today’s climate, not only would Griffith (a Welsh actor who donned skin-darkening makeup to transform him into an Arab) be castigated, but the movie would have come under heavy criticism for allowing this. In the 1950s, however, such things were regarded as business as usual. There was nothing out-of-the-ordinary in having a “name” actor play a character of another race. 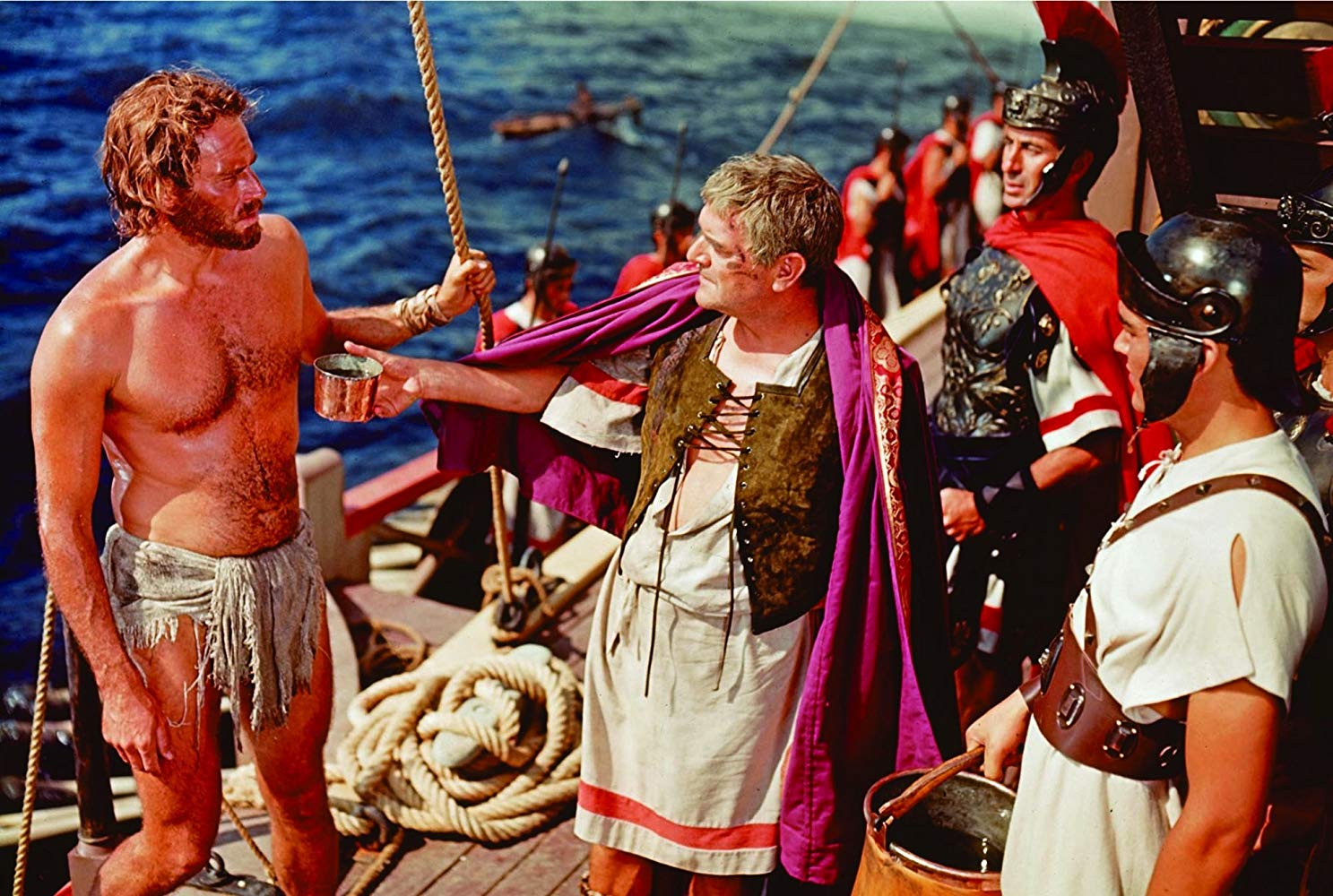 Ben-Hur’s source material is the 1880 novel by General Lew Wallace, which had previously been made as a short in 1907 and a silent feature in 1925. (There was also a recent 2016 adaptation.) Although the screenplay is credited to Karl Tunberg, little of what Tunberg wrote (beyond the overall narrative structure) remains in the final draft. Also contributing at various points were S.N. Behrman, Maxwell Anderson, Gore Vidal, and Christopher Fry. Vidal’s contributions are perhaps the most notable and have provoked some controversy. Vidal claimed to have scripted the scene where Messala breaks with Judah as if the former was a spurned homosexual lover. Heston and director William Wyler have disputed this, however.

Clocking in at three hours forty-two minutes, Ben-Hur overstays its welcome. Still, despite scenes that occasionally run too long, the movie doesn’t start to drag until after the chariot race and many of the early scenes are engaging. The movie as a whole works as a beautifully mounted historical melodrama. Its unquestionable Oscar success was a reflection of its popularity at the time of its release but, like most big-budget spectacles, the luster has faded over the years and some of the reasons for its admiration are no longer valid. Like The Greatest Show on Earth and Around the World in Eighty Days, Ben-Hur works best when viewed through the lens of nostalgia and the chariot race alone makes it worth consideration for anyone in the mood to plumb the vaults of Oscar history and settle in for a very long evening.