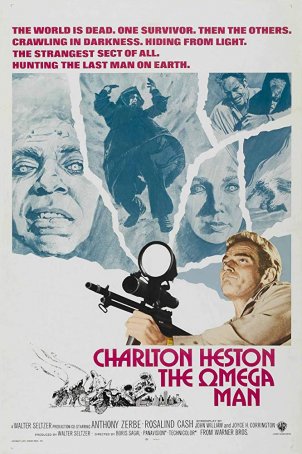 There’s something eerie about the way The Omega Man opens: Charlton Heston driving around a seemingly deserted Los Angeles (the empty streets are shown via helicopter shots as well as on the ground) while the theme from A Summer Place plays on his 8-Track. (In the theatrical version, this was Frank Sinatra’s “Strangers in the Night,” but rights issues required that it be changed for the home video release.) There’s no denying the effectiveness of this opening, a variation of the “last man on Earth” scenario. Unfortunately, The Omega Man peaks during its first five minutes. Nothing that comes after achieves the same level.

The film is loosely based on Richard Matheson’s I Am Legend and represented the second of three adaptations. The first came to the screen in 1964 with Vincent Price starring in The Last Man on Earth. In 2007, Will Smith put his stamp on the story in a release that retained Matheson’s title. The Heston version is probably the best known of the three. It’s dated but the early-‘70s trappings add to the ambience in a way that enhances the atmosphere. There’s a strong element of horror – the creatures that hunt Heston have elements of vampire and zombie in their DNA. And the dystopian flavor is influenced by Cold War considerations, which gives it a more immediate edge than one gets from similar movies made after the fall of the Soviet Union. 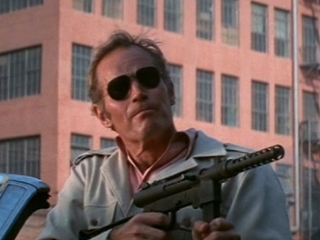 Narratively, The Omega Man is unremarkable although certain aspects of the story may have seemed more unique in 1971 than they do a half-century later. (The film was made in 1971, although it transpires in the fictional, near-future year of 1977.) Most post-apocalyptic movies deal in the same basic existential currency; this type of movie, which was unusual (although not unique) when it was made, has since become commonplace. The main character, Dr. Robert Neville (Heston), has survived a plague resulting from “germ warfare” that occurred during a Sino-Soviet territory dispute. The pathogens spread worldwide, wiping out almost the entirety of humanity. Neville, who had been working on an experimental vaccination, injected himself in time to avoid death.

He’s not alone in this new wasteland of a world, however. He is hunted by “The Family,” a group of plague survivors led by the self-proclaimed prophet Matthias (Anthony Zerbe). Albino refugees with an extreme light sensitivity, they sleep like vampires during the day to rise at night. Their primary goal is to kill Neville – with his affinity for guns and generators, he represents a link to the past they have repudiated. One day, while exploring Los Angeles looking for the Family’s hideout, Neville spots an unaffected woman, Lisa (Rosalind Cash). Although he loses her, she and her fellow refugee, Dutch (Paul Koslo), stage a rescue after Neville has been captured by Matthias. He learns that, like The Family, they are living with the plague in their bodies, although they have not fully “turned.” With Lisa’s help, Neville believes he can synthesize a cure from his blood. As the two embark on this project, they become lovers.

The most effective scenes in The Omega Man are the quiet ones, such as a sequence in Neville’s house where he goes about his daily routine – talking to himself (to remain sane) and playing chess with a mannequin as he prepares a meal. He drives recklessly around the city and, if he smashes a car, he goes to the dealership and takes another one for a test spin. Neville never goes anywhere without his two necessary tools: a gun and a can of gasoline. The action scenes are primitive (at least compared to today’s fare) and unconvincing. The love affair, although interesting because of the interracial element (something controversial and even taboo in parts of the country – this was only four years after the Supreme Court struck down anti-miscegenation laws), isn’t fully realized. There’s no chemistry evident between Heston and co-star Rosalind Cash. 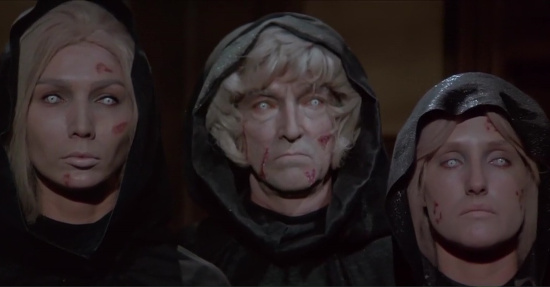 This was Cash’s second film and her character’s look and attitudes were inspired by the same cultural wave that gave birth to Pam Grier’s famous Blaxploitation roles. Cash’s nude scenes are gratuitous – something commonplace in the era as Hollywood continued to flex its uncensored muscles following the death of the Hays Code. The movie was classified GP (which would soon be changed to PG) – an indication of how much more permissive the ratings system (which had four designations at the time: G, GP, R, and X) was during the early 1970s.

Heston, age 47 at the time of filming, was into the second phase of his career. No longer the matinee idol who headlined three Bible-inspired epics, he had become a respected mature actor whose name was sought on marquees to enhance the salability of films. The Heston who made The Omega Man was the same Heston who headlined The Planet of the Apes and was a primary draw for the mid-‘70s disaster films, Airport 1975 and Earthquake.

The special effects used to make Los Angeles appear deserted required a number of different techniques. One was simply to do on-location filming in the business district early on Sunday mornings (this is when the helicopter shots took place). Another was to employ still photographs where people could be “erased.” A third was to do some shooting on a backlot. On the whole, the effect is successful. In fact, the sense of emptiness of a big, familiar city elevates The Omega Man.

The music was developed by Ron Grainer, a major name in film and television scores at the time on both sides of the Atlantic. He is best remembered today for his work on a pair of cult television shows: he composed the iconic main themes for Doctor Who and The Prisoner. While there’s little or no evidence of the Doctor Who music in The Omega Man, whole passages seem to have been lifted from The Prisoner. The effect makes one half-expect Patrick McGoohan to burst through a double door at any time. (Clearly, James Horner isn’t the only major composer to liberally self-cannibalize.)

During the course of its nearly-50 year life, The Omega Man has gone through several stages. At the time of its release, it was viewed by Warner Brothers as a mainstream science fiction/horror film with a major star leading the cast, and was profitable during its theatrical run. By the late-‘70s, a slightly censored version (with the nudity and a few of the more gruesome scenes snipped) was making its way through the non-broadcast network (UHF) television rerun market, where it gained a reputation as a reliably performing B-movie. By the 21st century, however, it had become a relic. Seen today, it’s cheesy in the way many older films are cheesy, but the strong sense of atmosphere helps to redeem some of the dated elements.