In 1987, Superman returned to the big screen after a four-year absence. The fanfare was more muted than it had been for any of the previous three entries into the franchise, including the critically lambasted and fan-unfriendly Superman III, which had appeared (at the time) to have killed the series. When it came to comic book movies, all the interest was focused on the future – Tim Burton was developing a new Batman and that’s where fans’ interest was concentrated. Superman IV seemed like an unnecessary extra chapter for a story that had already lasted too long. There were seeming reasons for optimism, chief of which was the return of Gene Hackman as Lex Luthor. It was also rumored that the Clark/Superman/Lois triangle, which had been shelved in Superman III due to a clash between Margo Kidder and director Richard Lester, was going to be revived. Superman IV couldn’t possibly be worse than Superman III, could it? No, but it also wasn’t better. Retrospectively, it’s hard to decide between the two which represents the series’ nadir.

Superman IV suffers from narrative problems resulting from an editing hatchet job that reduced the planned running time from 134 minutes to 90 minutes. With so much material elided, it’s unsurprising that the film can at times be difficult to follow. Director Sidney J. Furie, whose previous career high-point was either The Ipcress File or Lady Sings the Blues, fumbles the tone as badly as Richard Lester did in Superman III, veering drunkenly from action/adventure to comedy. Gone is the sense of naïve grandeur that made the original Superman such an endearing production. 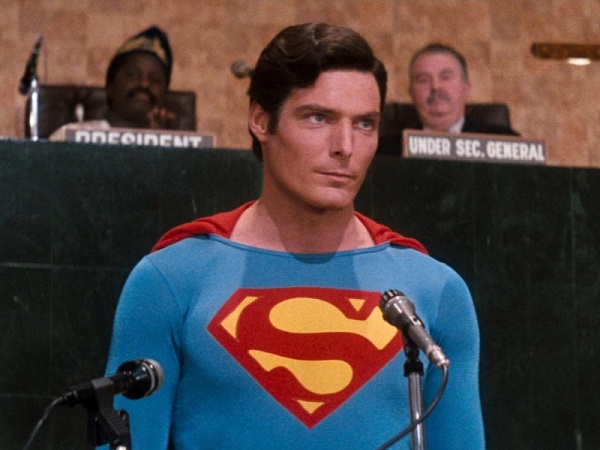 Lex Luthor is back but he’s not really the same Luthor as in previous installments, even though he is once again portrayed by Gene Hackman. In Superman, Luthor was a dangerous, amoral villain. Yes, he had a glib tongue and a penchant for dark humor, but he was willing to kill millions for oceanfront property. A fatuous streak emerged in Superman II, where he had little more to do than play Zod’s ineffectual toady, but the character in Superman IV is a caricature of his previous self. His single ambition is to kill Superman and he’s played more often than not as a comedic figure. It’s to Hackman’s credit that it almost works. In a role that many other actors might have sleep-walked through, Hackman seems to enjoy himself, hamming it up as if he’s in on a joke that the audience never quite gets.

Superman (Christopher Reeve in his final outing as the Man of Steel), having decided that he’s no longer merely the savior of Earth but an adopted son of the planet, decides that he has a moral responsibility to do what he can to rid humankind of its greatest danger: the unchecked nuclear stockpile that the superpowers are amassing. While he busies himself with collecting ballistic missiles for delivery to the sun, Luthor escapes from a chain gang with the help of his nephew, Lenny (Jon Cryer, doing his best Ned Beatty impersonation), and sets about his latest Wiley Coyote-inspired plan to destroy Superman. He steals a strand of Superman’s hair and uses the DNA to clone a mutated version of the Kryptonian, whom he dubs “Nuclear Man” (Hackman provides the voice to go along with Mark Pillow’s face and body). 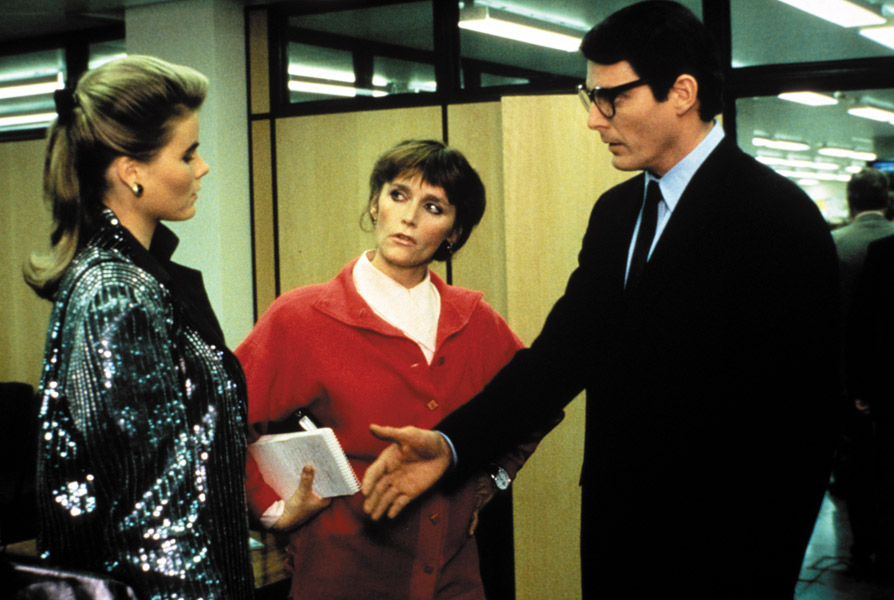 Back at the Daily Planet, things aren’t going smoothly. Perry White (a gaunt Jackie Cooper) sees his authority undermined when the paper is taken over by a Rupert Murdoch-inspired tabloid publisher named David Warfield (Sam Wanamaker). Warfield installs his daughter, Lacy (Mariel Hemingway), as Perry’s boss. She begins a flirtation with Clark, which annoys Lois Lane (Margot Kidder). This results in a bizarre, sit-com-ish “double date” in which Lacy pairs up with Clark while Lois is with Superman (requiring a lot of quick changes by Reeve). Once that bit of slapstick is over, the action elements of Superman IV kick into gear with a protracted battle royale between the title character and Nuclear Man.

It’s tempting to call the screenplay, credited to Lawrence Konner & Mark Rosenthal (from a treatment they wrote with Christopher Reeve), misbegotten, but it’s possible that the missing 45 minutes might have helped (if not totally redeemed) things. Still, the juxtaposition of comic book elements and the real-life dangers of the Cold War don’t work – the combination is jarring and the ease with which they are resolved feels like a cheat. There are some nice moments, although most occur during the early-going. Although hampered by terrible special effects, the trip around the world, when Lois remembers everything from Superman II, is affecting in its own right. The two characters get to briefly recapture the romance they once enjoyed before Lois is returned to her state of oblivion by another kiss. The financial constraints placed on the movie, which had its planned budget slashed in half (to less than $20M) by producers Golan-Globus, factor into the overall cheesiness. When Superman reached screens in 1978, it was hailed as opening new special effects vistas. Less than ten years later, the franchise had skidded back to where its visual elements were no more impressive than what might be seen on TV. At a time when effects were gearing to make the leap into CGI, Superman was relying on cut-rate techniques.  The opening credits look like knock-offs of the familiar style used in Superman and Superman II. Thankfully, the John Williams theme (orchestrated by Alexander Courage with a few new contributions from Williams) is intact, marking the film’s undisputed high point.

Much has been written about the disorganized, chaotic behind-the-scenes issues associated with Superman II but, for all the off-camera drama, the final film works extraordinary well. Not so with Superman IV, which looks as troubled as it was. By all accounts, Reeve was surly and uncooperative (his chemistry with Kidder, one of the highlights of the first two films, was fractured by his attitude) and prone to angry outbursts at the director, with whom he had a fractious relationship. Furie was constantly at odds with the producers, demanding (but not getting) more money. And everyone else was trying to collect a paycheck and move on as quickly as possible. 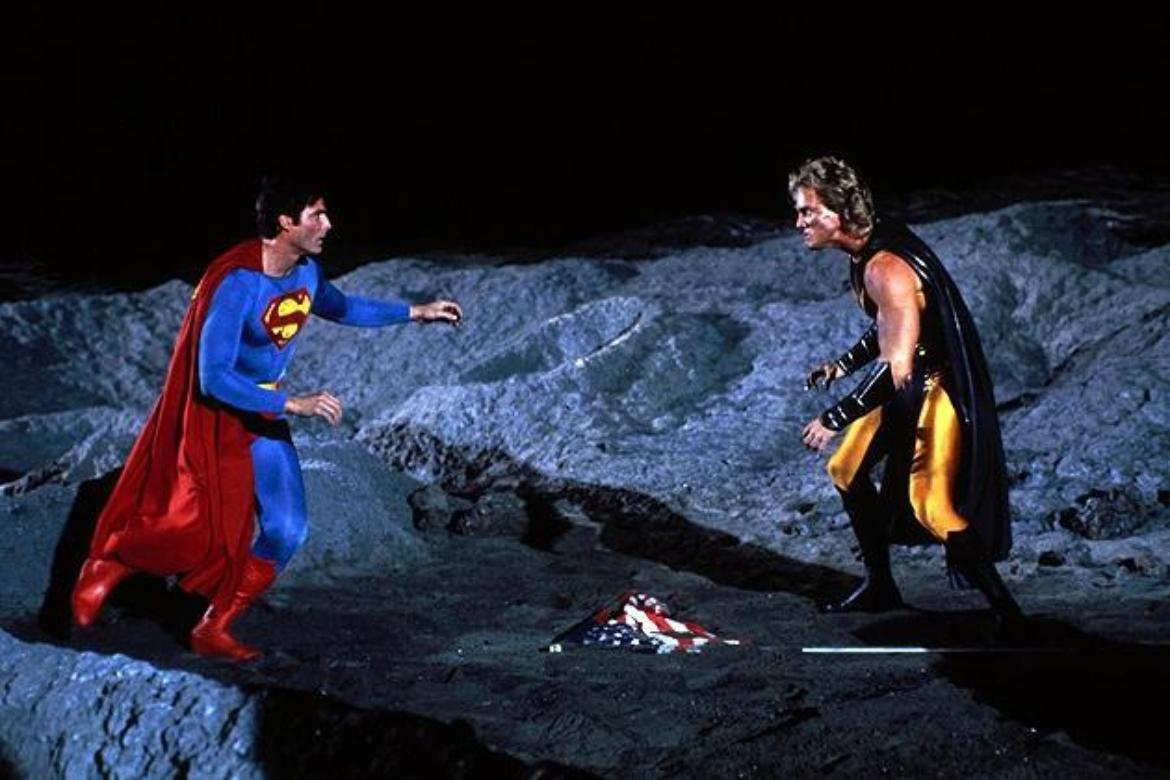 Because the Salkinds weren’t involved, Superman IV is sometimes ignored when discussing the Reeve era. It’s an ignominious way to end it. Fans were universally disappointed, unhappy about the length (epic movies shouldn’t be 90 minutes long), the tone (campy comedy is a bad fit), the story, the villain (why not find another “classic” villain to pair with Luthor?), and the performances. Critics savaged the film and the character of Superman disappeared into cinematic limbo for nearly 20 years, seemingly damaged beyond repair. In the end, while it can be said that Christopher Reeve made four Superman movies, only the first two are worth watching. Superman III and Superman IV are best forgotten as the only things they contribute to the legacy are in the negative.