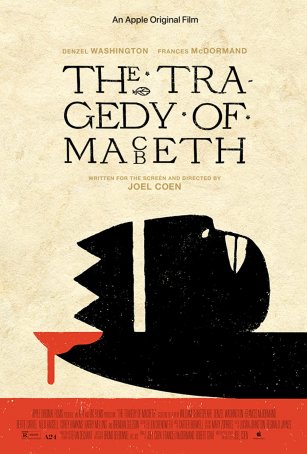 A wonderful thing about Shakespeare’s canon is that those plays can form the vehicles by which any director’s unique vision can emerge. Laurence Olivier, Orson Welles, and Kenneth Branagh all recognized this. With The Tragedy of Macbeth, Joel Coen (one half of the Coen Brothers) has taken what is sometimes called “The Scottish Play” and re-imagined it as a black-and-white tableau where the specificity of the film’s look, coupled with a cavalcade of memorable (sometimes macabre) images, is more important than the narrative. Those hoping for a “faithful” rendition of Macbeth may be disappointed. To meet his needs, Coen has cut and condensed the play to a tight 105 minutes, shedding anything remotely extraneous, and focusing exclusively on the main storyline and most prominent characters.

Coen opted to shoot Macbeth in a gloomy black-and-white to establish a neo-noir tone. Confining the action to soundstage sets enhances the unreal elements. Collages of images stick in the mind. They are too numerous to list but consider as an example the manner in which Coen elects to present the witch(es), played by Kathryn Hunter. They first appear as crows in the fog before one coalesces into a twisted human form. The Tragedy of Macbeth joins other interpretations in questioning whether these superstitious creatures exist or are manifestations of the title character’s subconscious. 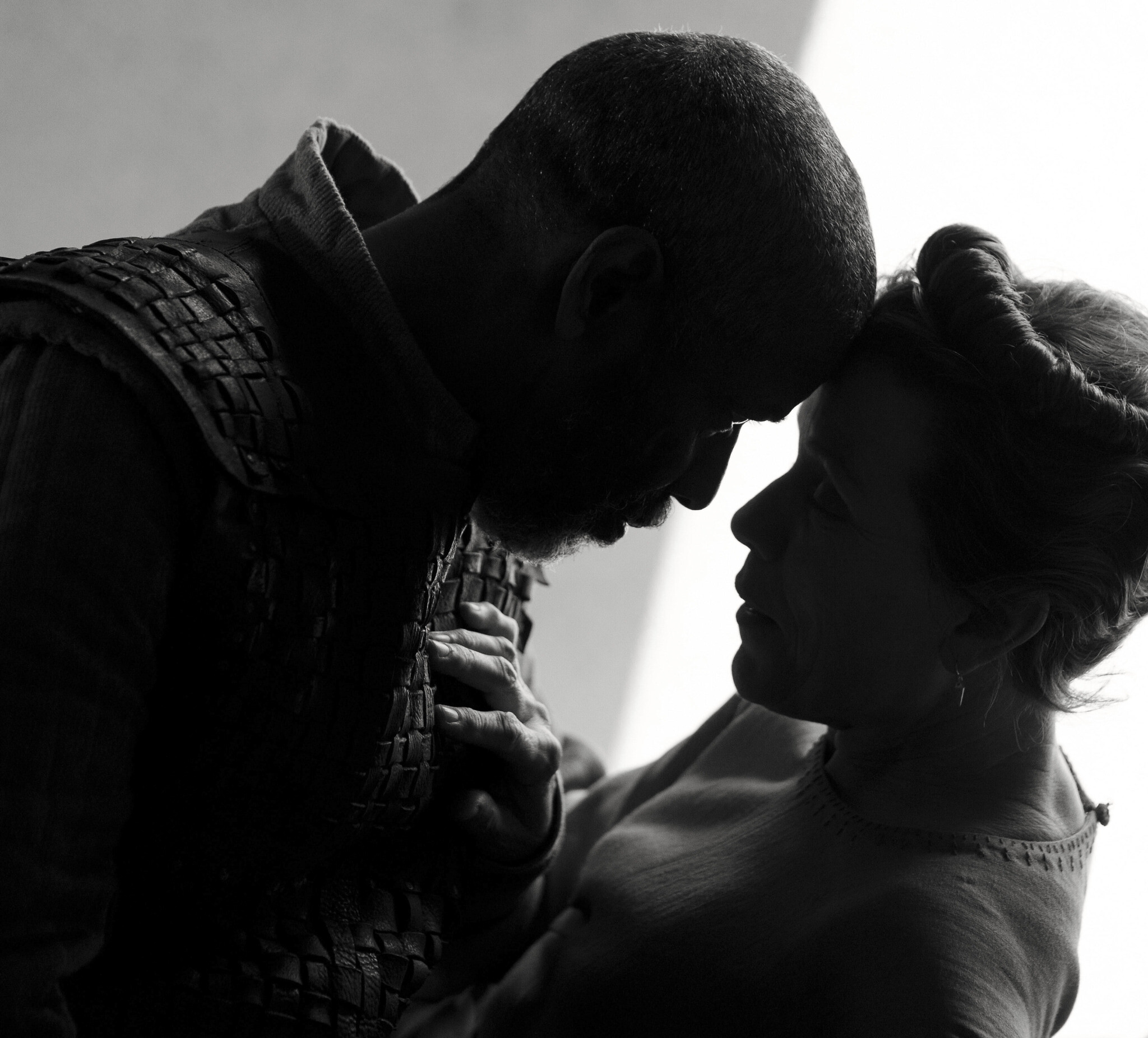 The story is straightforward: Macbeth (Denzel Washington), the Thane of Galmis, encounters three witches who prophesy that he will become the King of Scotland. The supernatural visitation prompts Macbeth, who is enabled by his wife, Lady Macbeth (Frances McDormand), to act. Despite being a seemingly loyal vassal, Macbeth seizes the opportunity (when presented) and murders King Duncan (Brendan Gleeson). The throne is his for the taking but holding it becomes problematic, especially when others call into question the legitimacy of his rule. He becomes paranoid and his wife’s conscience derails her sanity. In the end, another of Duncan’s underlings, Macduff (Corey Hawkins), fights a duel to the death that ends Macbeth’s bloody reign.

Denzel Washington is not as offbeat a choice for Macbeth as might initially seem. Although this is only his second Shakespeare film (the other being Branagh’s Much Ado about Nothing), he has no trouble with the character or the dialogue. He opts to make the Bard’s lines more conversational than poetic and his approach to the murderous Macbeth is low-key. Unlike in some productions, this Macbeth isn’t an over-the-top monster. He’s more prosaic and, as a result, more unsettling. He treads the slippery slope cautiously but there’s never a sense that he’s resistant to continuing on the path. 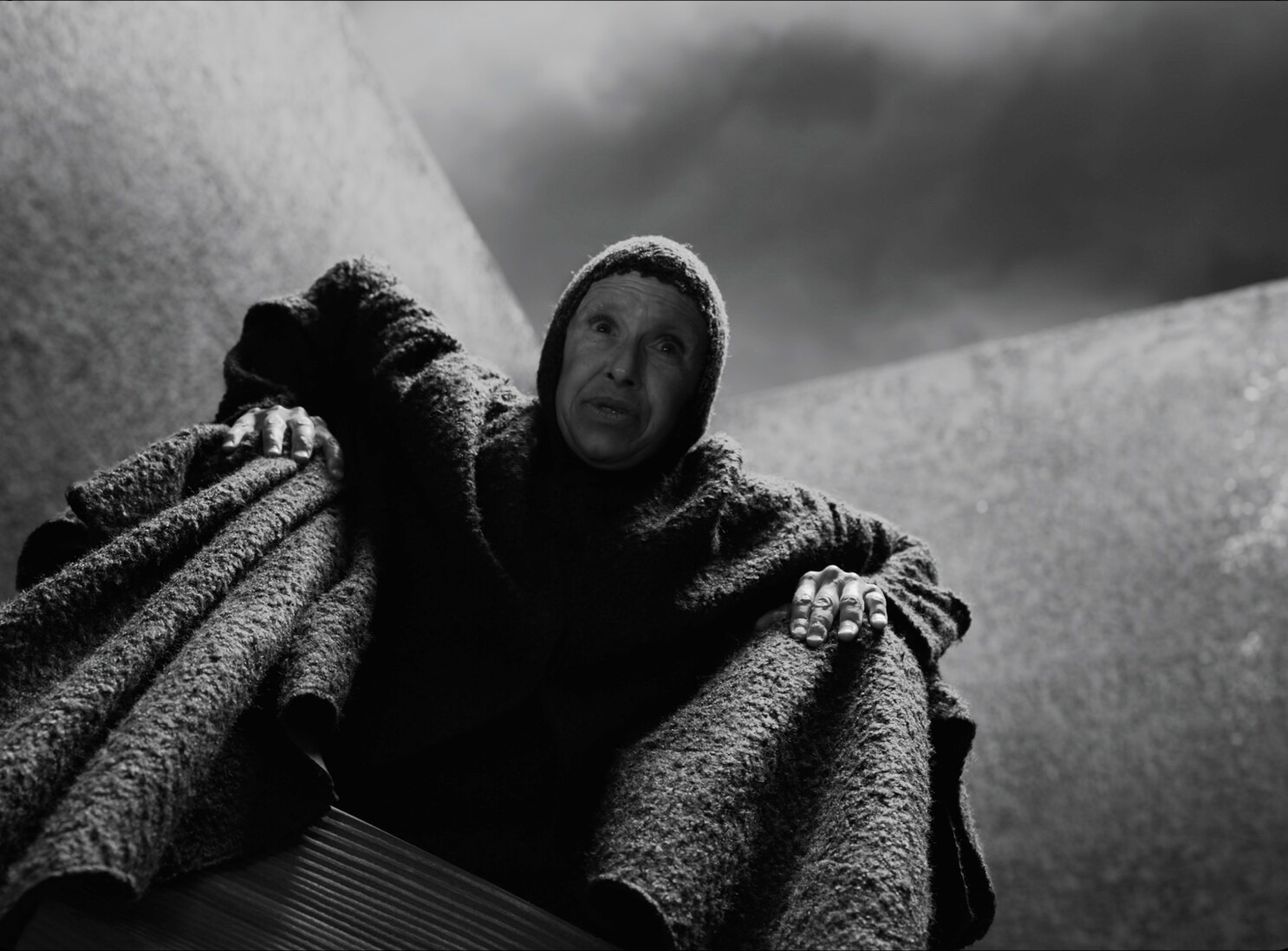 As Lady Macbeth, Frances McDormand offers an atypical perspective of a character who often represents Eve to her husband’s Adam. In this case, however, she’s less of an instigator and, as events cascade, she becomes increasingly uncomfortable with her role. By selecting what dialogue to retain for her, Coen helps fashion a persona that McDormand refines through her performance. The Macbeths aren’t the same couple we have seen in other interpretations.

Beyond the two leads, there are some nice supporting performances, including Brendan Gleeson as King Duncan, who ultimately falls victim to Macbeth’s ambition (the murder is shown); Bertie Carvel as Banquo (both the actual man and ghostly apparition); Corey Hawkins as Macduff; and Harry Melling as Malcolm. However, in more than one instance, the actors (as fine as their work may be) are overwhelmed by the atmospherics.

Prior to 2004’s The Ladykillers, all of the Coen Brothers’ films credited Joel with sole directorship. In reality, he and Ethan were creative partners. The Tragedy of Macbeth represents his first true solo outing and he is joined here by past Coen Brothers’ collaborators, including cinematographer Bruno Delbonnel and composer Carter Burwell. The result, perhaps predictably, feels a little like something from the Coen Brothers, yet somehow different (the Shakespearean language is undoubtedly part of that). 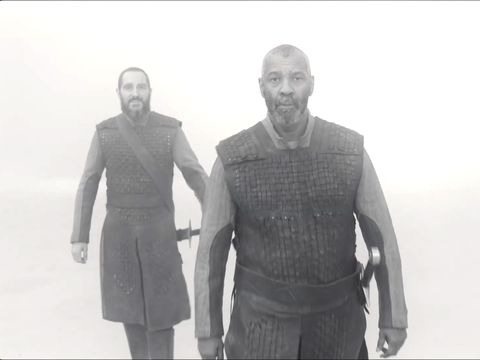 Not all versions of Macbeth are successful. A 2015 adaptation (starring Michael Fassbender and Marion Cotillard) was inert. The sometimes-lauded 1971 Roman Polanski interpretation was bloody and at times cartoonish. But Orson Welles’ 1948 film is a respected classic and Akira Kurosawa’s Throne of Blood may be the best Macbeth of all, despite not using a single line of Shakespeare’s dialogue (and changing the setting and names). Of all its predecessors, The Tragedy of Macbeth owes its greatest debt to Throne of Blood, which also relied heavily on spooky imagery and powerful visual impressions.

The caveat, which is often the case with direct adaptations of Shakespeare, is that The Tragedy of Macbeth requires some heavy lifting. The viewer has to engage with the movie because Shakespearean dialogue needs to be processed. This is a well-made, artistically effective motion picture but its appeal is limited to those who appreciate movies that are driven as much by the aesthetics as the narrative. Unlike Branagh, who came the closest of any recent director in making “Shakespeare for the masses,” Joel Coen has targeted a more elite audience. He achieves his goal; Macbeth may be among the Bard’s weakest popular plays (opinion is, of course, divided) but this is one of the better cinematic conversions.