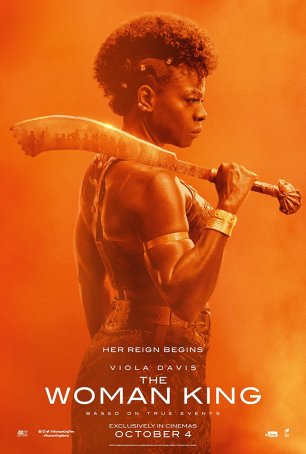 Once upon a time in motion pictures, the historical epic was a popular genre – big, sprawling stories featuring larger-than-life characters splashed across a wide screen. The best of these often deviated wildly from the facts that formed their foundations, but that didn’t matter. Some won Oscars; others didn’t. In the former category, Braveheart and Gladiator come to mind. In the latter, The Last of the Mohicans. I’m not mentioning these by accident – director Gina Prince-Bythewood has cited them as inspirations for The Woman King. And, although her modern-day retelling of 1820s incidents doesn’t soar to the heights of that trio, it’s a welcome arrival in a climate where comic book and horror movies have choked out almost everything else like weeds in a once-fertile garden.

It takes a little patience to get into The Woman King. The movie opens with nearly 50 minutes of setup – introducing the characters, establishing the setting, and proving background for the impending conflict. Some of this is heavy-lifting and, although generally inspired by events on the African continent during the early 19th century, it is not historically accurate (nor does it pretend to be). Just as Mel Gibson took considerable liberties in bringing the tale of William Wallace to the screen in Braveheart, so Prince-Bythewood and her screenwriter, Dana Stevens (working from a story that Stevens co-developed with actress Maria Bello), have relied on a heavily fictionalized account of what happened when the state of Dahomey revolted against the Oyo Empire in a bid for freedom, with the Agojie (the name for the all-female King’s guard) at the forefront of the conflict. 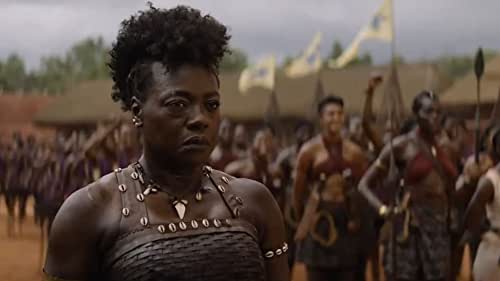 Narratively, The Woman King has three pillars. The first relates to the overall political situation which has the king of Dahomey, Ghezo (John Boyega), reckoning with the blood on his hands and those of his successors as a result of the kingdom’s heavy involvement in the slave trade. The second focuses on how the grizzled general Nanisca (Viola Davis) comes to grips with her past. And the third is the coming-of-age story of the orphan and Agojie recruit, Nawi (Thuso Mbedu). The movie’s first concentrates on world-building and character development. There are at least a half-dozen secondary characters who enter the story, many of whom have significant roles once the battles begin.

The strength of the movie lies more in the performances than the storyline, although the screenplay is carefully constructed to provide its share of old-fashioned, crowd-pleasing moments. This is one of those films when standing up and cheering is, if not encouraged, at least accepted. It thrives on emotional catharses and offers more than one of the “big” instances. Those interludes work primarily because the filmmakers lean on the talents of lead actress Viola Davis and newcomer Thuso Mbedu. Making her motion picture debut, Mbedu gives a performance of impressive physicality and emotional range. (She’s 31 years old but credibly plays someone more than a decade younger.) She holds her own alongside the titanic presence of Davis, whose seemingly cold exterior hides a plethora of conflicting emotions that are always percolating just under the surface. The connection between these two is strong, immediate, and believable – a crucial ingredient of the alchemy that allows The Woman King to work during the times when the brutality of two significant engagements isn’t filling up the screen. 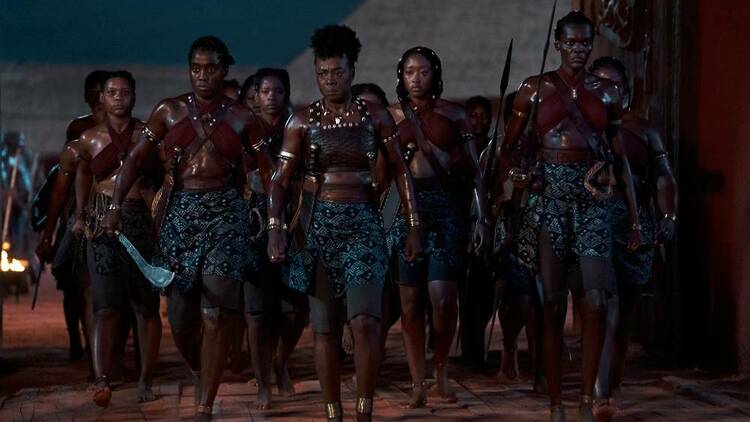 The chief criticism I have seen leveled against The Woman King is that it diminishes and/or changes the role of Dahomey and King Ghezo with respect to the slave trade. History tells us that a lion’s share of Ghezo’s wealth was based on the subjection and sale of fellow Africans and there’s little indication that he was the reformer we see in the movie. This might be a flaw if The Woman King was seeking authenticity but it’s not intended to paint an unvarnished picture of how things were. The old adage applies: Never let the facts get in the way of a good story. In this case, by having Ghezo question the morality of the slave trade, it not only simplifies the reasons for the war with Oyo but allows for a more nuanced examination of culpability.

There’s arguably more here than can possibly be contained within the 135-minute package; one can see an entire streaming series developing around the movie, fleshing out aspects of Dahomey, the royal court politics, and the intricacies of life within the Agojie. Many of the characters might have longer, more fully fleshed-out arcs. But what Prince-Bythewood provides is more than enough for a rousing motion picture filled with well-choreographed battle scenes effectively folded into stories of human interest.