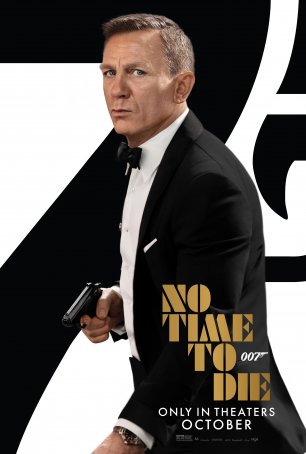 In all the years I have watched James Bond movies, I will confess to rarely having been shocked by a narrative development or twist. Prior to No Time to Die, there was one exception: the conclusion of OnHer Majesty’s Secret Service, when Bond’s new wife, Tracy, was murdered. Now, there are two exceptions and perhaps It’s only fitting that No Time to Die references On Her Majesty’s Secret Service explicitly by borrowing the John Barry/Louis Armstrong song, “We Have All the Time in the World.” The fifth and final Daniel Craig outing (and the 25th overall official 007 production) takes the lead character into a narrative maze that confronts him with situations he has never previously encountered. For director Cary Joji Fukunaga (True Detective), this daring high-wire act is destined to change how the franchise proceeds in the future. Oftentimes, the concept of “spoilers” might seem irrelevant with a Bond movie, considering the comfortable predictability of the formula, but No Time to Die upends the convention.

Even as No Time to Die looks to the endings and the future, it gazes into the franchise’s past. In addition to the aforementioned OHMSS references, there are callbacks to other pre-Craig elements, including a segment in Jamaica that breathes Dr. No and a portrait of the original M, Bernard Lee (there’s also one of Judi Dench). Old friends and enemies make return engagements: the “new” M (Ralph Fiennes), Felix Leiter (Jeffrey Wright), Moneypenny (Naomie Harris), Q (Ben Whishaw), Dr. Madeleine Swann (Lea Seydoux), and Blofeld (Christoph Waltz). Composer Hans Zimmer jettisons his ego and samples aggressively from the John Barry/Monty Norman “James Bond Theme” while doing his best to imitate and update a Barry-esque approach to the overall score. The narrative is at times a little ungainly and the movie runs too long (an excessively generous 163 minutes), but when it works – which is often – this is a glorious tribute to 007 past and present. 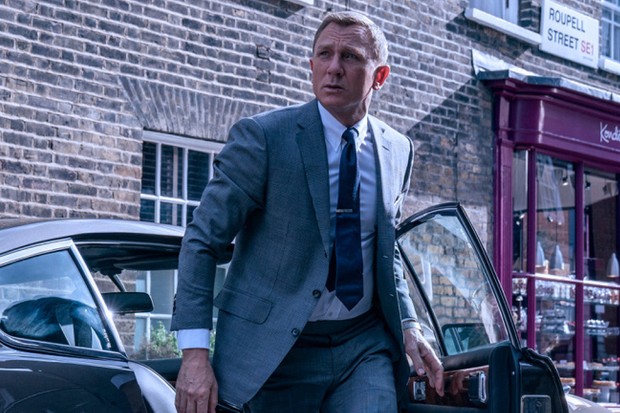 Following a rigorously faithful gun barrel sequence, the film plunges us into a flashback that details a horrifying incident from the childhood of Madeleine Swann. Following this excursion, we return to the “present,” where the adult Madeleine has become Bond’s latest paramour. But there’s more to this relationship than Bond’s traditional love-them-and-leave-them m.o. This isn’t a mere fling and, to move forward, Madeleine urges 007 to make peace with his past by visiting the grave of his Casino Royale love, Vesper Lynde. But SPECTRE is waiting at the tomb and Bond must deal with the revelation that his new lover may be “the daughter of SPECTRE.” He saves Madeleine’s life but, as he puts her on a train to safety, he decrees that they will never again see one another.

Five years pass. The next time we catch up with Bond, he is living out his retired life in Jamaica. Back in London, his 007 number has been reassigned to a new agent (Lashana Lynch) and he is assumed to be dead. Then Felix Leiter re-enters Bond’s life, looking for a little help. With MI6 and the CIA not on speaking terms, Washington would like to recruit the ex-agent on a mission to capture a Russian scientist, Valdo Obruchev (David Dencik), who has created a DNA-targeted virus. Bond initially demurs but, after a tense phone conversation with M and a more personal encounter with the new 007, he changes his mind. He soon learns that the imprisoned Blofeld is somehow involved in this situation, as is a rogue CIA agent (Billy Magnussen), and a mysterious figure known as Safin (Rami Malek). On the mission to capture Obruchev, Bond has a helper – the lovely Paloma (Ana de Armas), whose claim of “three weeks of training” doesn’t fill the ex-secret agent with confidence.

From an action standpoint, No Time to Die includes its share of high-octane moments, the best of which occurs during the pre-credits scene (mostly a car chase). Perhaps as an acknowledgment of Daniel Craig’s age (or a concession based on his post-Spectre comments about how badly his body was beaten up during filming), Bond is subjected to fewer physical altercations, although one-on-one fights haven’t been entirely eliminated. And, while many of the high-profile action sequences challenge the laws of physics, they don’t break them the way entries to the Fast and Furious franchise do. 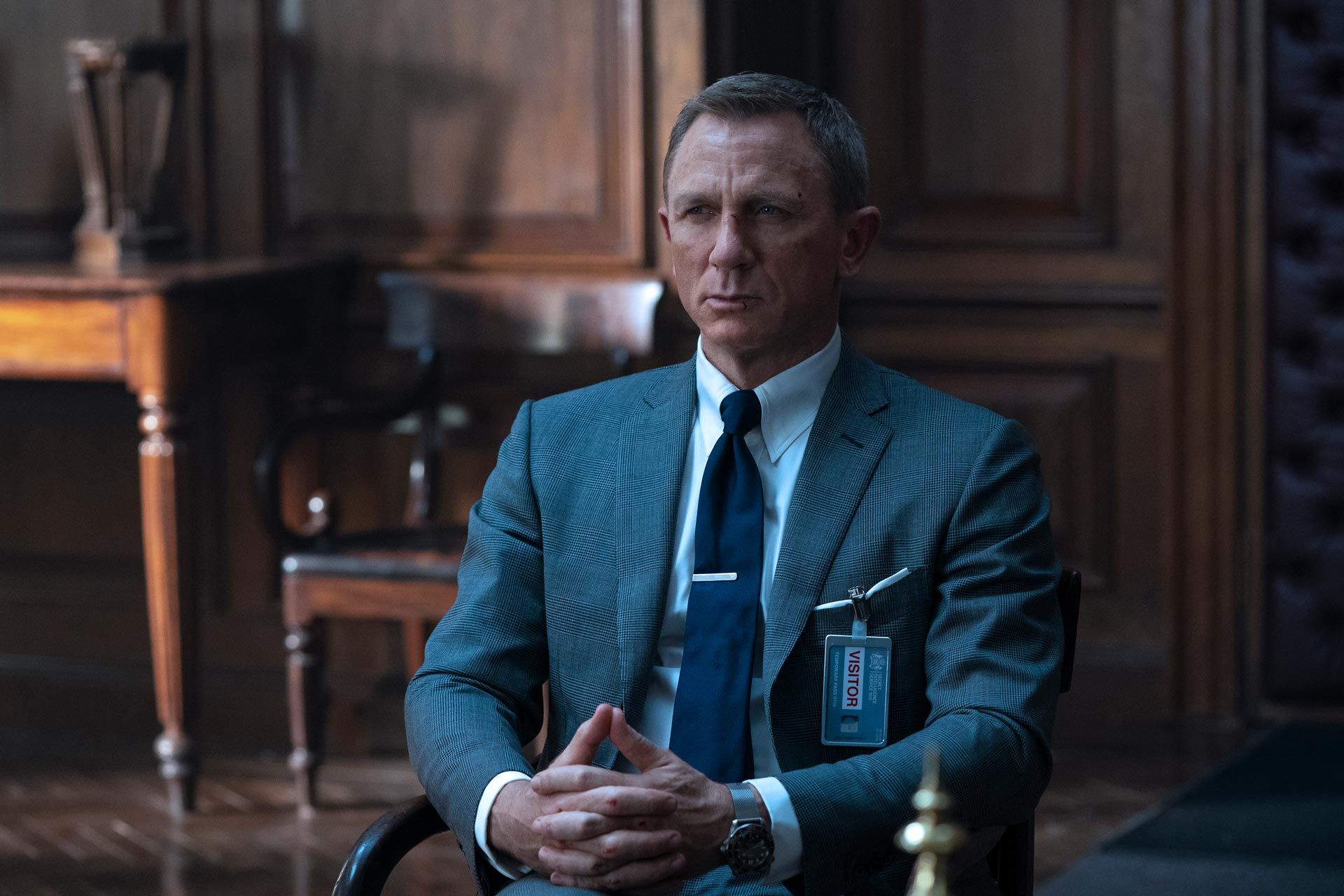 After spending fourteen years and five films in the role, Craig is no longer the dashing, fresh face he was when it was announced that he would be replacing Pierce Brosnan in the coveted role (a decision that purportedly blindsided Brosnan and created a deep rift between the actor and Eon Productions). The screenplay acknowledges the changes. The Bond in No Time to Die is older, wiser, more reflective, and harbors a vault of regrets. This is a different interpretation of the character than we have previously seen. Craig was 51 when the movie was made, but two actors have been older – Roger Moore played 007 four times after turning 51, with his final appearance (in A View to a Kill) filmed at age 57, and Sean Connery made a Bond comeback in Never Say Never Again at 53. Yet neither Moore nor Connery presented such an introspective version of the superspy.

Although many of the classic elements of the Bond template are in place – the flashy, tricked-up cars; the elaborate, kinetic action sequences; the globe-trotting scope; the diabolical villains and their henchmen – one aspect is notably missing: sex. As with most action heroes, Bond has changed over the years. In 1995’s Goldeneye, Judi Dench’s M famously called him “a dinosaur.” However, while Brosnan’s 007 was still something of a womanizer, that quality diminished with Craig and, in No Time to Die, it’s absent. He appears to be monogamous – the only woman he has sex with is Madeleine, whom he loves. He spares Paloma a look (who wouldn’t?) and considers a dalliance with the new 007, but it’s ultimately hands-off. (The film has a little fun with the 007/007 “seduction” scene, enjoying a stereotype reversal.) 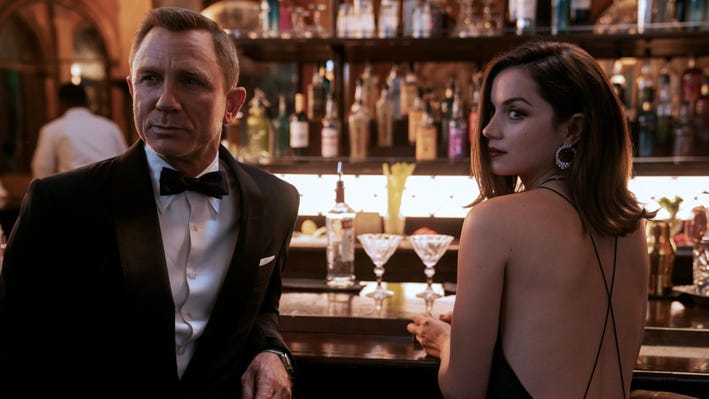 In its quest to attain epic status, No Time to Die falls afoul of a few pitfalls. The narrative is unwieldy, with some uninteresting side stories getting too much exposure. The pacing is uneven with periods of roller coaster-like intensity being interspersed with stretches that feel overlong and stretched-out. The main villain (one of the weakest adversaries in the 25-film series) is kept in the shadows for too long (although the red herrings have their own appeal). The film’s occasional overreaches aren’t always a negative; the high points are very high and, when it’s all over, most viewers will remember them.

Although it may be possible to enjoy No Time to Die without a lot of Bond history, rewatching On Her Majesty’s Secret Service and Spectre beforehand will enhance the experience and, trust me, this is one of those movies where maximizing familiarity pays dividends. Certainly, James Bond will return (the end credits, as always, assure us of this). When he does, he will be played by a different actor and it’s possible that the same may be true of one or more of the supporting cast members. Every Bond has been allowed to put his stamp on the role but Craig did it in a way that no one (even Connery) has achieved, by creating his own mini-saga with a beginning (Casino Royale), a middle (Skyfall), and an end (No Time to Die). Moving beyond this film will provide a unique challenge to the filmmakers and we’ll see how they handle it in another three or four years. COVID-19 delayed our appreciation of Craig’s swansong by 18 months. It was worth the wait.