Perhaps the most appropriate word to describe Disney’s 2019 re-make of their 1992 classic, Aladdin, is “unnecessary.” “Pointless” might also apply. Although those terms could be employed for a host of remakes, they are more apt here because the original animated film remains widely seen and beloved by children and adults. The reasons for the remake are greed and ego; by preying on parents’ desire for family fare and their sense of nostalgia, Disney has all-but-guaranteed a box office bonanza.

The 1992 Aladdin, a delightful mix of the song-and-dance numbers that proved successful in The Little Mermaid and Beauty and the Beast with a bravura voice performance by Robin Williams, clocked in at a svelte 90 minutes. Despite telling essentially the same story, Guy Ritchie and his co-credited screenwriter, John August, have added a thoroughly unnecessary 38 minutes to the running time. Not only does this slow down Aladdin’s pace but, despite the inclusion of a new song, it adds to the downtime between musical numbers.

Visually, the movie is a mixed bag. There are times when it endeavors (and even succeeds) to match the spectacle of the animated film. The most notable of these sequences are the initial “introduction” to Agrabah (a long, unbroken shot soaring over rooftops and dipping into streets), the Cave of Wonders adventure, and the arrival of Prince Ali. Often, however, director Ritchie seems to be desperately striving to match the marvel of the animated film. The special effects at times become so overwhelming that the 2019 Aladdin often descends into a new, more soulless form of animation. Like the live-action Beauty and the Beast, the element missing from Aladdin is its heart. It’s technically proficient but the lack of creativity is astonishing. 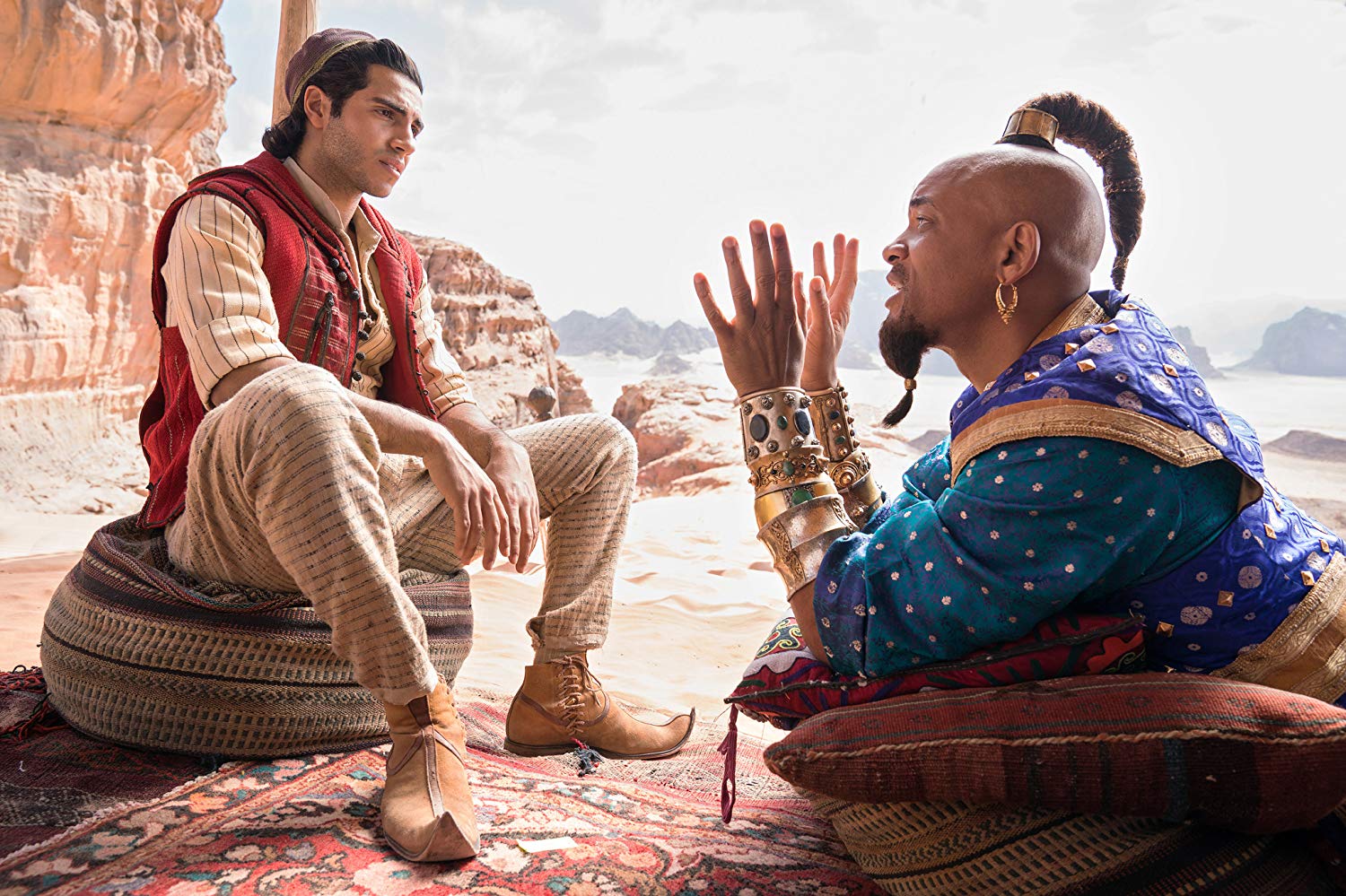 The filmmakers deserve credit for seeking ethnic authenticity in their casting choices. Meena Massoud’s Aladdin looks the part, even though the performer is not the best singer or actor. He has middling chemistry with his more talented counterpart, Naomi Scott, whose Jasmine evinces more backbone (and screen time) than her animated counterpart. Marwan Kenzari’s Jafar is too low-key, seeming more whiny than sinister. Then there’s Will Smith, who proves able to emerge from Robin Williams’ shadow and claim the role as his own. The single shining point of Aladdin is Smith, whose Genie has the same qualities of impish improvisation and kinetic energy as the animated version. (Ritchie finds a way to give the cartoon Genie a cute cameo.)

The story tracks closely to that of the 1992 iteration (rather than any previous movie to have featured a character named “Aladdin”). The title character is a street urchin in Agrabah who, along with his faithful monkey friend, Abu (whose “voice,” such as it is, is provided by Frank Welker, the only actor to reprise his work from the 1992 project), ekes out an existence as a thief. One day, he encounters and flirts with the Princess Jasmine, who is out in public incognito, trying to learn about the lives of her subjects. Later, when Aladdin tracks her down to the palace to return a bracelet, he discovers her true identity. He also meets Jafar, the vizier, who sees in Aladdin “the diamond in the rough” who can enter the Cave of Wonders and retrieve a magic lamp. His scheme to use Aladdin to further his megalomaniacal aims fails when Aladdin rubs the lamp to release the Genie. For his first wish, the street kid wants to be a prince so he can woo and marry Jasmine. But things go awry: although the Sultan (Navid Negahban) is greatly pleased by Prince Ali and his jewels and jams, Jasmine prefers Aladdin to his posh alter-ego, and Jafar is suspicious of the newcomer. 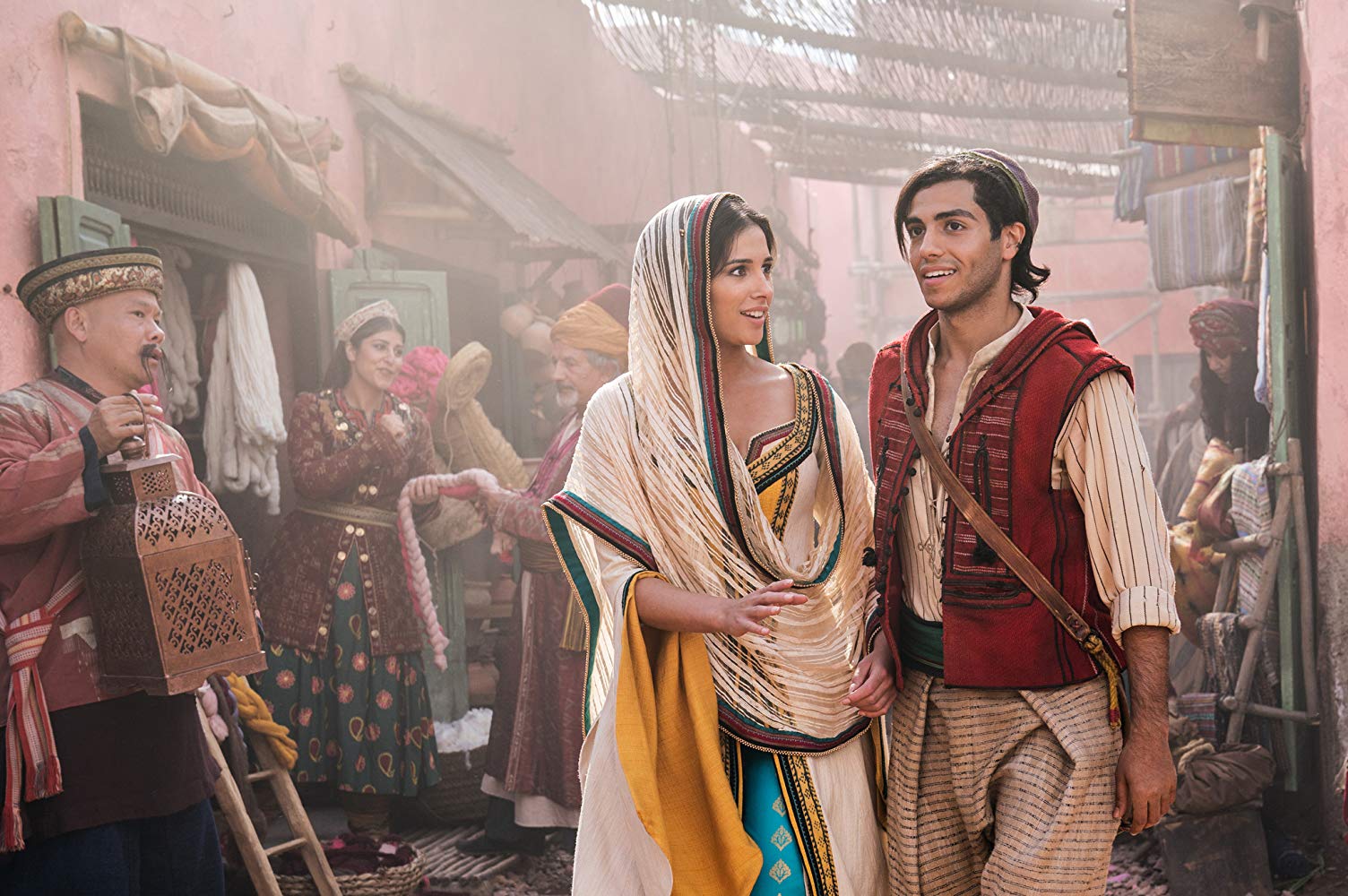 All the songs from the 1992 film are present, although the lyrics have at times been changed to fit the new interpretations of the characters. For the most part, however, the three Alan Menken-Howard Ashman collaborations (the final fruit of Ashman’s long career – he died during the production phase), “Arabian Nights,” “Friend Like Me,” and “Prince Ali,” are intact (the last of those represents the most successful translation of any musical number). The duo of Menken-Tim Rice songs, “One Step Ahead” and the Oscar-winning “A Whole New World” are given their due. The new number, “Speechless” (with lyrics by La La Land’s Benj Pasek and Justin Paul), highlights Naomi Scott’s superb voice but is at odds with the film’s other music. It serves two purposes: to beef up Jasmine’s role and provide Aladdin with an Oscar-eligible song.

Someone who hasn’t seen the original Aladdin, if such a person exists, might find the new film occasionally diverting, sporadically amusing, visually sumptuous, and entirely too long. Those familiar with the 27-year old forbear may perceive this new iteration for what it is: a callous money-grab designed to help Disney continue its box office dominance. For a movie about magic, that’s one element sorely lacking in this retread.