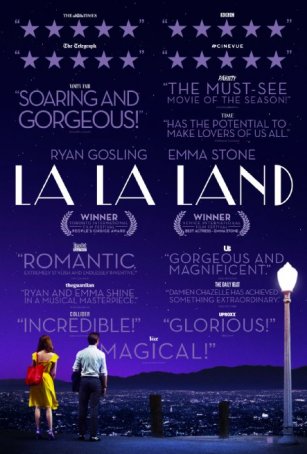 La La Land, Damien Chazelle’s much-anticipated follow-up to his stunning 2014 feature debut, Whiplash, illustrates the magic that can result when a director is fully committed to a vision. Chazelle doesn’t just want to tell a story (although he does). He doesn’t just want to enrapture an audience (which he also does). And he doesn’t want to rely on nostalgia to make his story work (although it plays a big part in the overall experience). La La Land isn’t just the best made-for-the-screen musical to reach theaters in a very long time, it’s arguably the best (non-animated) cinematic musical of any kind since 1986’s delightful Little Shop of Horrors. Yes, it’s more vibrant than Chicago, more heartfelt than Les Miserables, and more successfully staged than a chorus of other contenders. 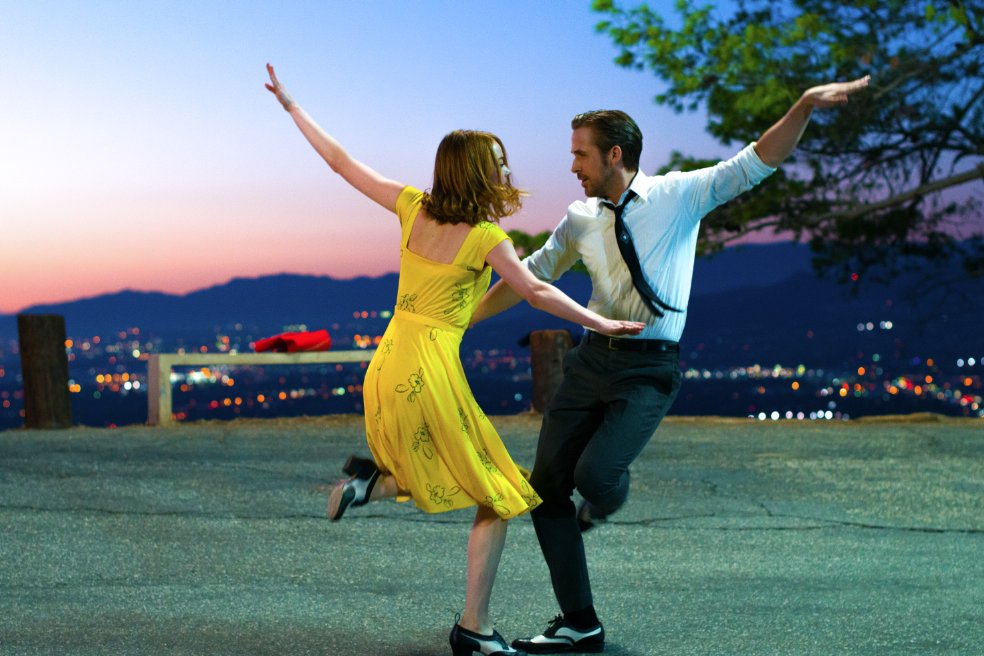 To make La La Land, Chazelle has turned back the clock. The style, approach, camerawork, color palette, and viewpoint are all straight out of the 1950s. The lead actors, Ryan Gosling and Emma Stone, can frequently be caught channeling Fred Astaire, Gene Kelly, and Ginger Rogers. Chazelle and his cinematographer, Linus Sandgren, love long takes and perhaps none is more ambitious than the opening one - a musical number on a jammed freeway, where drivers exit their cars and use singing and dancing as an antidote to road rage. The filmmakers’ love of the Golden Age Musicals emerges most forcefully in numbers like this but it permeates every frame of La La Land. With the exception of a few profane utterances (probably incorporated to avoid the worrisomely tame “PG” rating), there’s not an element in this film that couldn’t have been found in something made in 1952. The setting is modern day but the feel is old-fashioned (and that’s not in any way a bad thing).

Chazelle doesn’t only love classic musicals, he loves jazz. That much was clear from Whiplash but he makes doubly sure we know it here. The male main character is a frustrated jazz musician and a key aspect of the plot involves his passing on his love of music to his leading lady. Chazelle isn’t shy when it comes to exposing the viewer to all types of jazz - from the classic style that evocates the greats to the commercially viable modern variation used to attract a younger generation. John Legend comes along for the ride as a spokesperson for the latter. When it comes to addressing the tension between the two camps, Chazelle avoids condescension as Legend brutally lays out some hard truths about why “die hards” are killing jazz by holding tight to the great men of the past rather than innovating for the future. 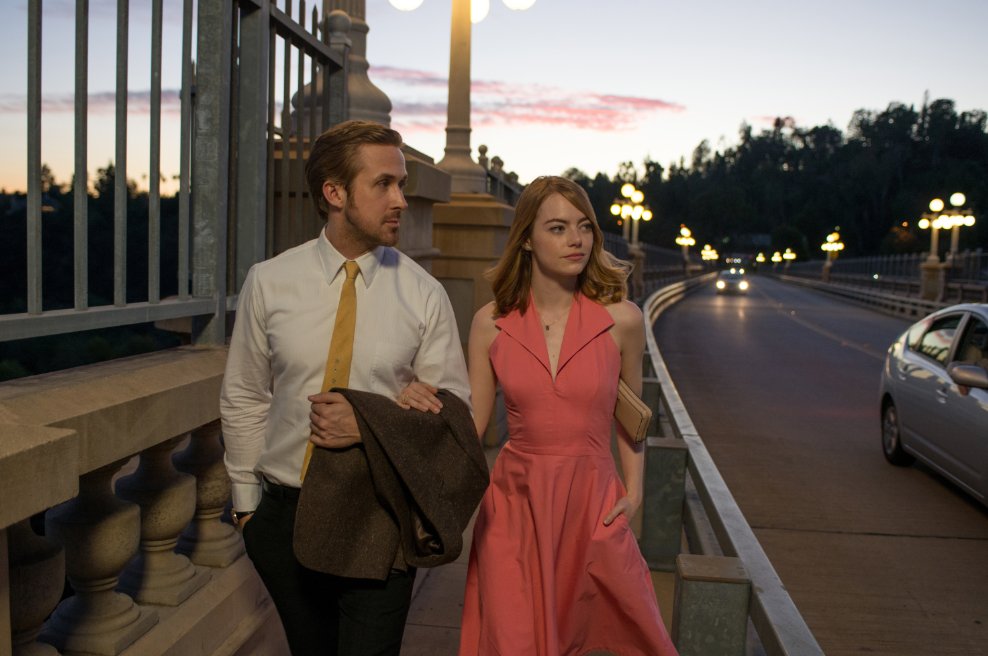 La La Land is divided into five acts that follow the progression of the seasons - Winter, Spring, Summer, Fall, Winter. Although it starts out trading on our memories of old musicals, it eventually gains its own identity. Thematically, there’s nothing groundbreaking here. It’s a boy-meets-girl, boy-and-girl-fall-in love, boy-loses-girl kind of story that reminds us that following a dream demands a price. La La Land is a fairy tale but it has a realistic edge. Instead of embracing the “happily ever after” ending in which all things are possible, La La Land uses a kind of inverted It’s a Wonderful Life to show how things might have been in another film.

Chazelle requires tremendous range from his leads. They have to sing (which they do well enough) and dance (which they do better than well enough). They have to be able to handle drama and comedy. And they have to strike sparks when they look into each other’s eyes, hold hands during a movie, or kiss. These are adept actors (both are past Oscar nominees) but in this tale, chemistry is as important as acting, and there’s no deficiency there. And, although there are times when Gosling and Stone’s singing is found wanting, they occasionally surprise. (After an uncertain start, Stone nails “Audition”.) Chazelle has opted not to go the Marnie Nixon route, allowing his actors to do their own vocal stunt work, favoring authenticity over polish. (This is one area in which his approach is decidedly unlike that of his 1950s predecessors.) 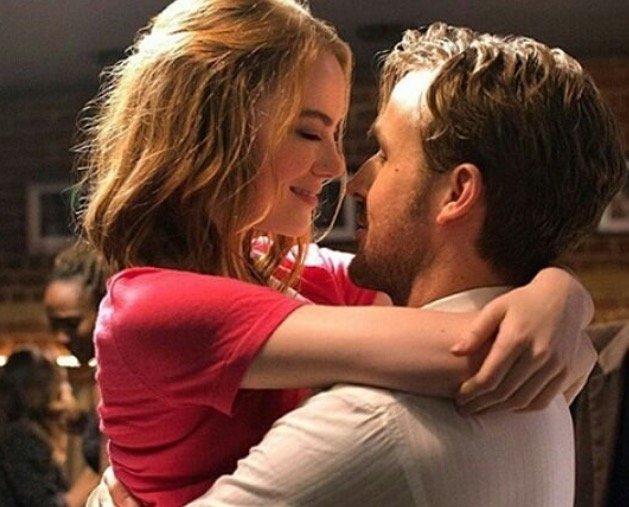 When we first encounter Mia (Emma Stone) and Sebastian (Ryan Gosling), they are trapped in the opening traffic jam, although neither participates in the song-and-dance block party. Their lives, like their cars, are crawling along. Their dreams seem far away, perhaps unattainable. Sebastian wants to open a jazz club but he’s trapped playing Christmas carols on a piano in a high-end restaurant for a grouchy J.K. Simmons. Mia is one of many - a wannabe actress who is forced to work as a barista to make ends meet while waiting for elusive audition calls and even more elusive call-backs. These two are getting nowhere fast until they meet. It takes three times before things click. As summer arrives, they’re in love but, as with the seasons, the height of warmth augurs the start of a predictable decline.

La La Land offers moments of unabashed euphoria but it’s never saccharine. That’s the key to its appeal - it allows us to dance with the characters but never feels manipulative. Its dramatic moments are more genuine than is often the case in musicals. Chazelle is as interested in developing a compelling, character-based romance as he is in selling soundtracks. And, although not all the songs are instantly memorable, at least two of them (Mia’s theme, “Audition”, and Sebastian’s theme, “City of Stars”) linger. They aren’t generic songs that get lost in a miasma of same-sounding tunes. There are five or six original compositions (music by Justin Hurwitz; lyrics by Benj Pasek and Justin Paul), none of which fall into the “instantly forgotten” category.

It seems that every Oscar season offers viewers a new musical or two. Many of these are well-produced, masterfully choreographed, and impeccably staged. None of Hollywood’s recent offerings has lifted me up with the potency and grace of La La Land, one of the year’s most effervescent samples of pure entertainment.