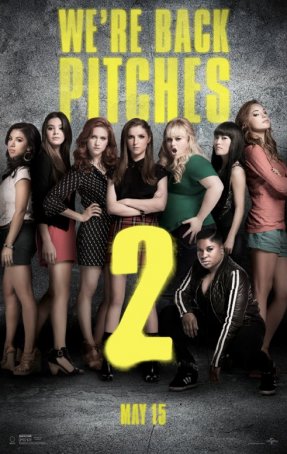 Spoiler Warning! Because I reveal things about the ending of Pitch Perfect 2 in this review, I am duty-bound to warn readers in case they wish to stop now. (Of course, if you don't care, feel free to continue…)

I am as far from the target demographic for Pitch Perfect 2 as a member of the human race can possibly be. The wrong age. The wrong gender. The wrong disposition. If I was being snarky, I could add additional qualifiers, but I won't go there. Nevertheless, one doesn't have to be in the filmmakers' bulls-eye to recognize the quality (or lack thereof) of a motion picture. And, regardless of whatever ephemeral entertainment this production may offer to some, it is not by any reasonable definition a good movie. It is badly written, inexpertly directed, poorly acted, erratically paced, and features music of dubious worth. It's possible to enjoy Pitch Perfect 2 the same way one enjoys a TV variety show - with the higher functions of the brain disengaged. This isn't cinema; it's vaudeville. 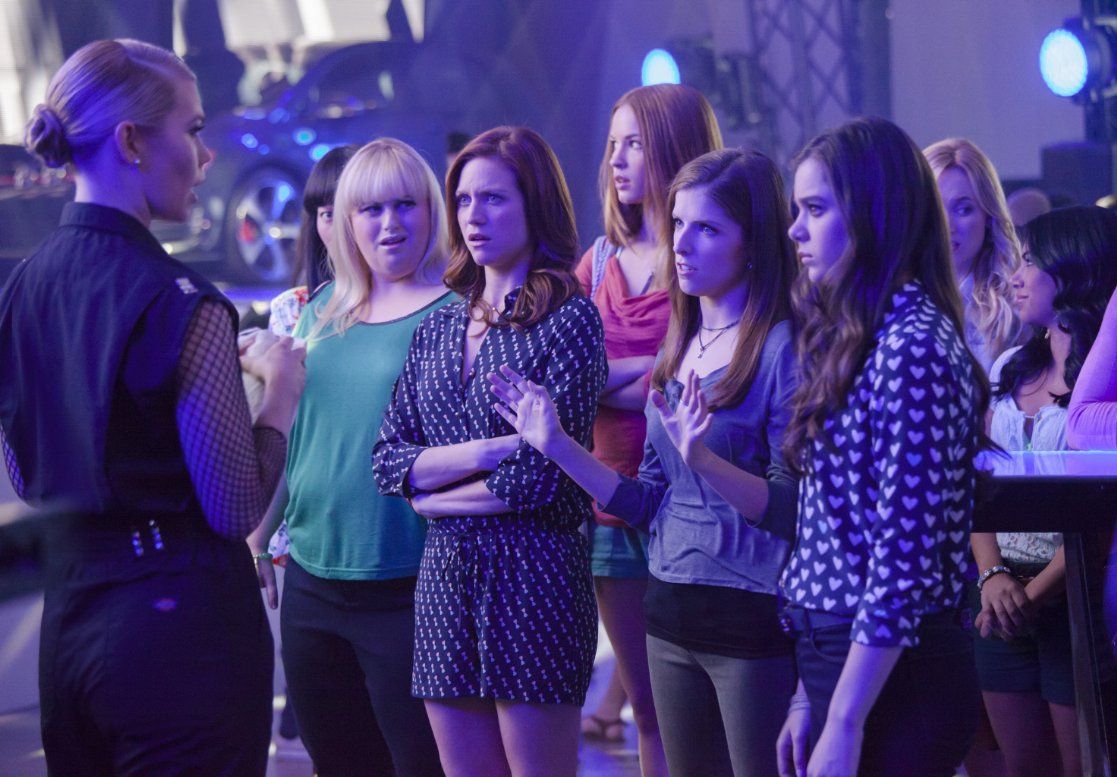 Like its more watchable predecessor, which at least featured solid directing and editing and a degree of giddiness during the high-energy songs, Pitch Perfect 2 follows the conventions of a sports movie. And, as is often the case with sports movies, there's really nowhere to go with installment #2. So the sequel, which exists for financial and not creative reasons, rehashes past glories and does what it can to advance a paper-thin story that previously concluded satisfactorily. Somehow, the movie manages to mess up the most basic aspect of any sports movie. And, by not sticking the ending, it leaves the viewer with a vague, hard-to-define sense of dissatisfaction. The problem is this: the uber-nasty Teutonic bad guys don't get their comeuppance.  Sure, they lose. The good guys take home the gold. But the victory is so muted that we don't get the moment of gloating we feel we deserve. Imagine if Rocky 4 (a good analog for Pitch Perfect 2) had ended with Rocky triumphing via a split decision. He would still have won and Ivan Drago would have lost, but how would the audience have felt?  That's Pitch Perfect 2.

Some might argue that the movie isn't really about the big competition at the end - it's about cardboard characters "evolving." Truth is, no one in this film shows credible growth despite the lip service paid to how they have changed.  That's surprising when one considers that a key ingredient for growth is fertilizer and Pitch Perfect 2 has no shortage of it.  If winning at the end matters only insofar as it relates to character development, why bother spending so much time making the rival team as nasty and unappealing as possible? 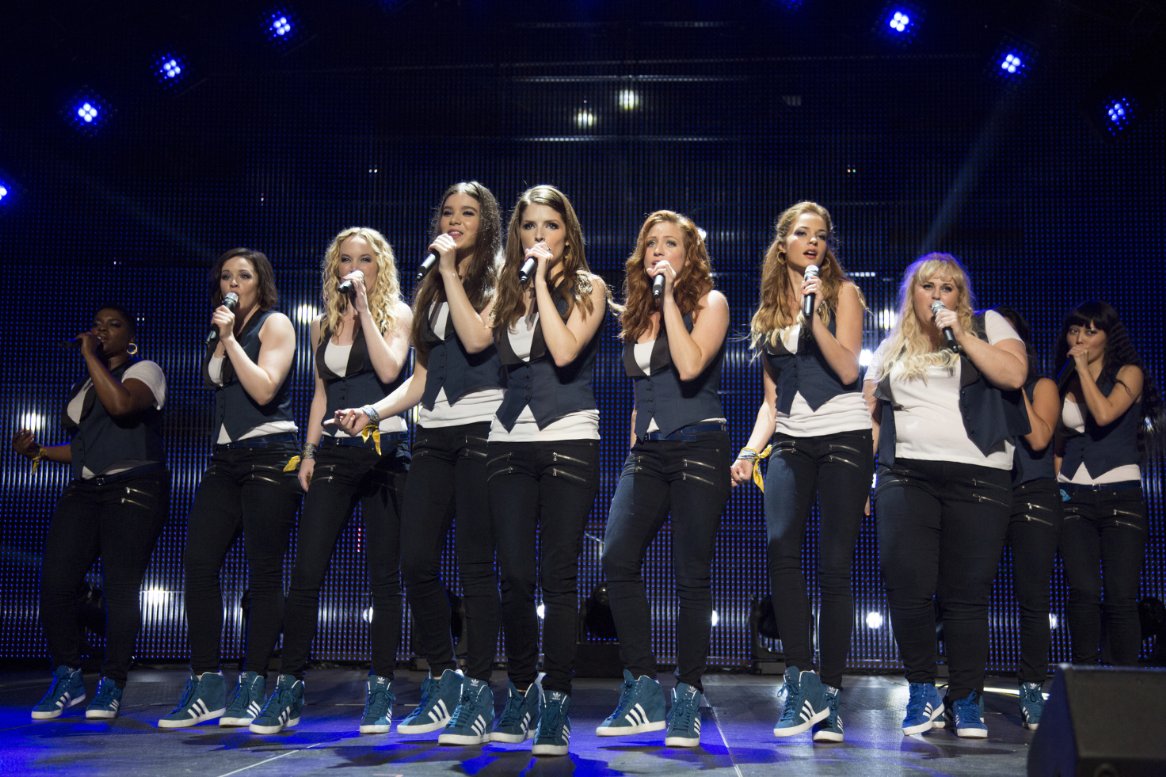 With no place to go, the movie falls back on the sports movie sequel staple - taking things to the next level. Now that the Barden Bellas have conquered America, how about the world? After being banned from performing Stateside due to a "wardrobe malfunction" in front of President Obama at Lincoln Center, they seek to repair their reputation by representing their country overseas in the Olympics of Acappella. There they face their nemesis, a German team called Das Sound Machine with a dominatrix lead singer (Birgitte Hjort Sorensen) and back-ups who were dusted off the neo-Nazi stereotype casting shelf. In what is intended to be a running joke, Bella singer Beca (Anna Kendrick) develops a lesbian crush on her tall, blond opponent.

The reunion gives every character a subplot to pursue, each less compelling than the next. Beca, gazing into the mists of her life beyond the Bellas, seeks to pursue music production by accepting a secret internship. Of course, this leads to success - but only after initial frustration. Fat Amy (Rebel Wilson, the female version of Chris Farley) finds love in an unexpected place. Chloe (Brittany Snow) frets over what will happen to her after graduation. Aubrey (Anna Camp), the projectile vomiting champ from the first film, returns like Apollo Creed to train the Bellas for their upcoming competition. The new blood is provided by Hailee Steinfeld as Emily, the daughter of a former Bella whose disastrous beginning with the group paves the way for her to make a big contribution at the end. 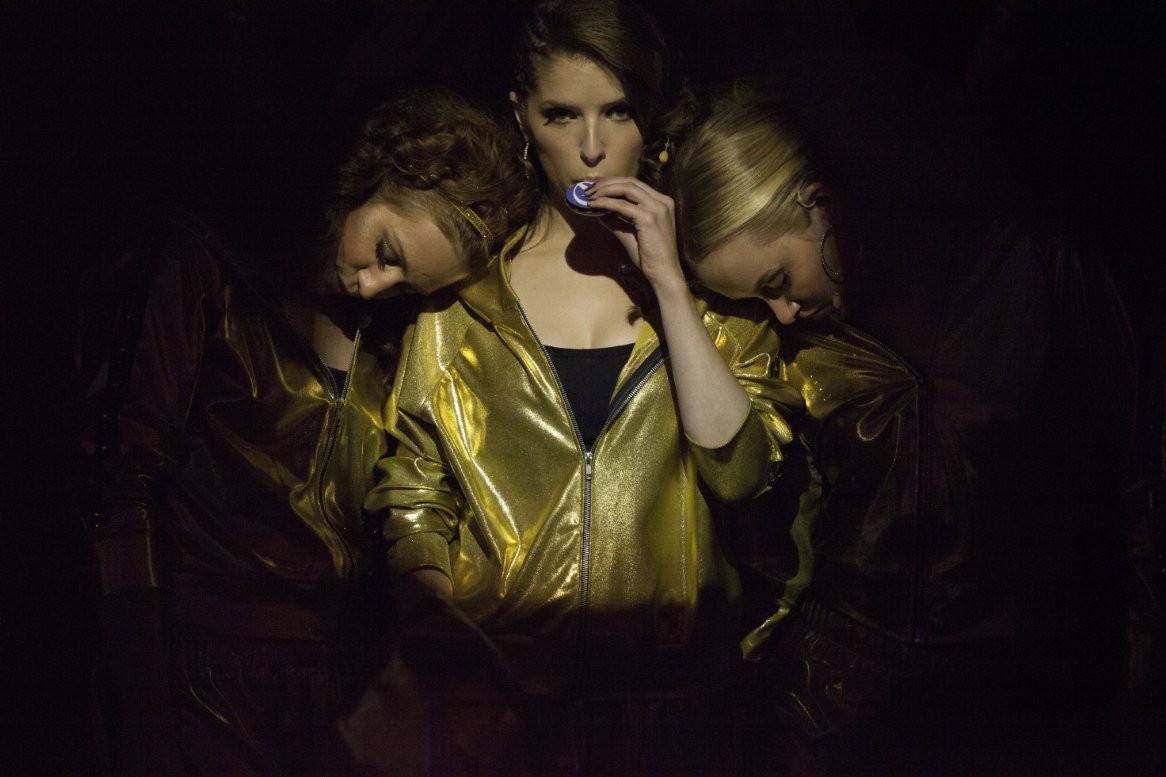 Truthfully, though, no one goes to a movie like Pitch Perfect 2 for the story. They go for the music (I guess). This is Glee for the big screen; where else can you go to hear stars croak karaoke-level covers of "Shake Your Booty", "Wrecking Ball", "Baby Got Back", "We Are Never Ever Getting Back Together", and "We Belong"? Strangely, however, while there's no shortage of tunes, the energy that characterized the performances in the first film is absent. Some of the blame has to go to actress-turned-director Elizabeth Banks, who not only mishandles the musical numbers but is tone-deaf when it comes to comedy and flow. Pitch Perfect lurches from one vignette to the next without any clear sense of purpose.

The comedy in Pitch Perfect 2 falls into the "cheap and easy" (and frequently unfunny) category. Rebel Wilson provides the lion's share of the film's "humor" with abrasive, cartoonish vigor. If nothing else, the movie can't be accused of being politically correct. The jokes are occasionally homophobic, sexist, and wallow in ethnic and nationalistic stereotypes. The Germans speak with "funny" accents and the Asian/Latino members of the Bellas have no purpose other than to utter "funny" non-sequiturs. If the intention is to disempower such views through satire, Banks mishandles the material.

Pitch Perfect 2 is a lot like a Transformers film in that its popularity is impossible to understand for a nonbeliever. Like the Michael Bay franchise, this one has a large share of passionate defenders (who will begin issuing death threats as soon as this review is posted) and is bulletproof at the box office. The demographic may be different but the feeling of having been subjected to untreated sewage is similar.