It has been nearly 15 years since the last time Will Ferrell was funny (Stranger than Fiction) and about a decade since the last time he has starred in anything worth watching (his surprisingly effective dramatic turn in 2010’s Everything Must Go). Sadly, neither of those statements needs amendment as a result of the release of Eurovision Song Contest, a high-concept, low-brow romantic comedy that overstays its welcome by at least a half-hour and can’t decide whether it wants to buy into or satirize the incomprehensibly popular European singing contest.

To the extent that Americans know anything about “Eurovision,” it’s that it effectively gave birth to ABBA about 45 years ago. Eurovision Song Contest doesn’t demand any deeper understanding, which is fortunate for those who have a low tolerance for this sort of thing. By setting the movie within the “Eurovision” bubble, Ferrell, co-screenwriter Andrew Steele, and director David Dobkin (Wedding Crashers) are able to provide Europeans watching the film with a familiar touchstone. 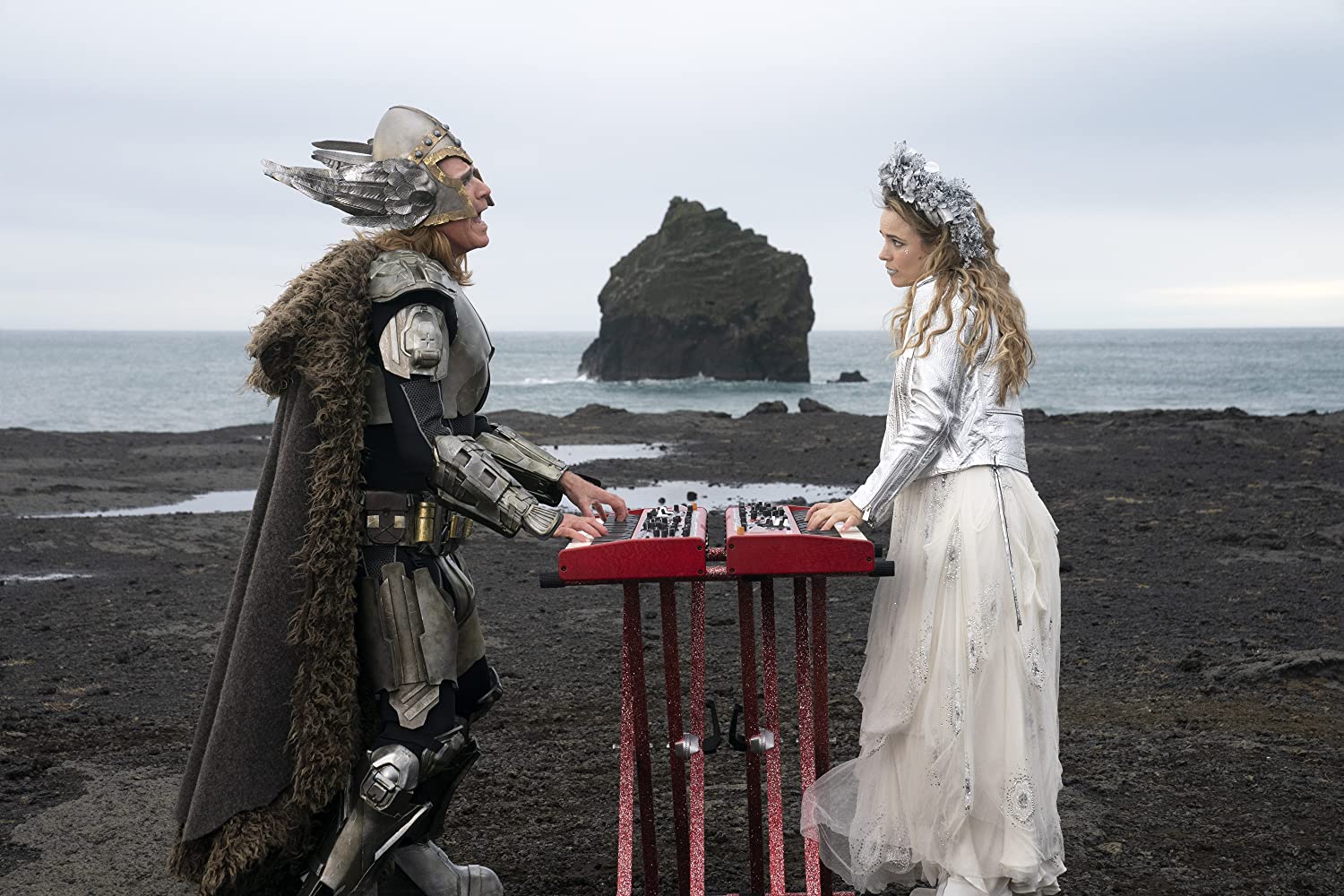 The movie splits its time between Husavik, Iceland and Scotland (and filming occurred in both locations, which is a plus). The former represents the hometown of Lars Erickssong (Ferrell) and his singing partner, Sigrit Ericksdottir (Rachel McAdams), who may be his sister but probably isn’t. The two grow up with a shared ambition (it’s actually Lars’ dream but Sigrit adopts it because she loves Lars and wants to spend time with him): win Eurovision. The goal of getting to the competition seems unlikely at best, especially considering the strong opposition of Lars’ father, Erick (Pierce Brosnan), but fate (and perhaps a group of elves) lends a hand.

To determine who will represent Iceland at the main event in Scotland, a preliminary contest has to be held pitting twelve Icelandic groups against one another. With eleven of the twelve slots filled, Lars and Sigrit’s band, Fire Saga, is randomly chosen for the final spot. However, when an accident wipes out all the performers except Fire Saga, Lars and Sigrit find themselves unexpectedly representing their country in the U.K. There, they discover that the odds are longer, the obstacles are higher, and their unrevealed romance is in danger. Lars is wooed by Mita (Melissanthi Mahut), a performer from Greece, and Sigrit has been targeted by the Russian Lion, Alexander Lemtov (Dan Stevens), who is the favorite to win the whole thing. 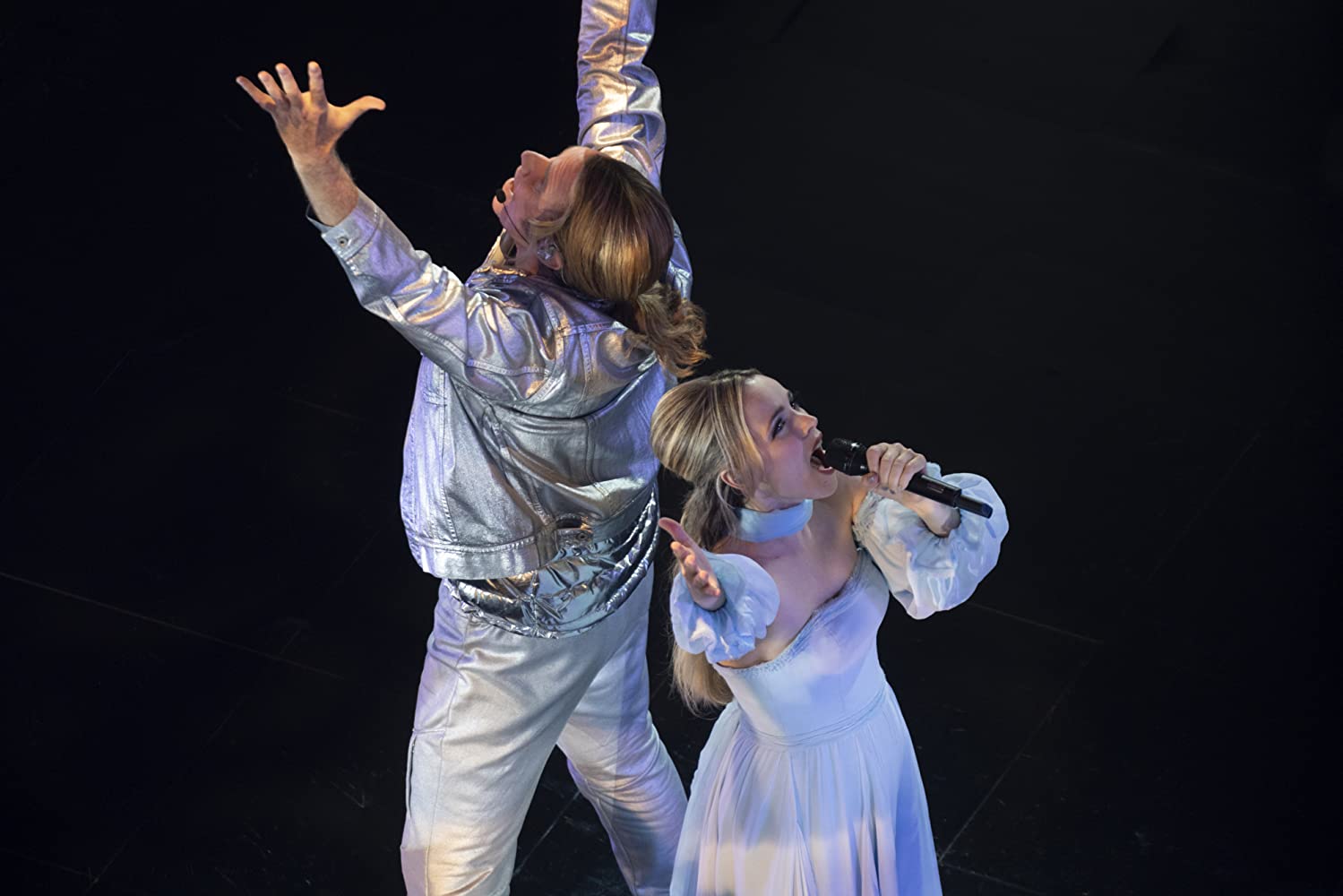 The film’s level of comedic inventiveness is flaccid. It’s not that there aren’t some decent laughs to be had (although, given the talent involved, one would expect more – at least until one remembers that Ferrell’s previous film was the godawful 2018 bomb of Holmes and Watson) but they are too widely spaced and some of the funny bits go on for too long, like the one with the clueless American tourists. (The term “beating a dead horse” comes to mind.) In addition, the incorporation of a seemingly endless stream of middling pop songs (none of which is blessed with humorous lyrics á la Spinal Tap), pads out the running length well beyond what’s reasonable for a movie with such modest expectations. Dobkin, who comes from a music video background, has a flair for staging the musical numbers (and one, a fusion of everything from Cher’s “Believe” to ABBA’s “Waterloo,” is dizzyingly enjoyable), but there’s only so far he go with the mediocre material.

As for the actors… Ferrell’s schtick got old a long time ago and he’s the proverbial dog who hasn’t learned any new tricks. The dramatic potential he showed in Everything Must Go has vanished underneath the increasingly tedious repressed, clueless persona that Ferrell has perfected. His deficiencies are somewhat counterbalanced by Rachel McAdams in an underwritten role and Dan Stevens, who enjoys a little scenery chewing. Cameos include Demi Lovato and Graham Norton, who somehow manages to steal the three (or so) short scenes in which he appears.

The curse of the Too-Long Netflix Original Film strikes again. The only thing epic about Eurovision Song Contest is the length. Narratively, this is a generic romantic comedy. The settings (Iceland and Scotland) make it seem a little different but that’s a red herring. The film’s primary advantage is that it’s available for free (as part of a Netflix subscription) which makes it painless to try out. You can be forgiven, however, if you find your finger inching toward the fast-forward button upon occasion.