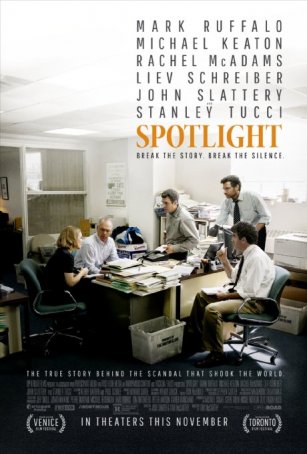 Spotlight is a Valentine to investigative journalism and a stark reminder of where we’re headed now that this brand of writing has become an endangered species. The film is unique in that it focuses almost entirely on the process. The characters are secondary. The dramatic tension arises not from forces of right clashing with those of wrong but from the difficulties encountered by newspaper people struggling to get to the truth while beset by budget cuts and deadlines.

In 2001, The Boston Globe’s “Spotlight” team, consisting of editor Walter “Robby” Robinson (Michael Keaton) and reporters Mike Rezendes (Mark Ruffalo), Sacha Pfeiffer (Rachel McAdams), and Matt Carroll (Brian d’Arcy James), began investigating allegations of cover-ups of sexual abuse within the Massachusetts Roman Catholic Church. Initially faced with a handful of violations, the number of possible cases grew from 4 to 13 to an astounding 90. After following leads, interviewing victims and lawyers, and devoting months to the effort, the reporters wrote the story in early 2002 and triggered a tsunami that swept across the country and around the world.

Spotlight is about the abuse scandal in the same way that All the President’s Men is about Watergate. The crimes and cover-ups represent a critical aspect of both films but the core drama in each is about the reporters who doggedly pursue leads regardless of how unsavory they may be. The perspective is that of the three men and one woman who comprise the “Spotlight” team - not the victims, not the priests, not Cardinal Law. The main location is the Globe’s newsroom, not a church or a courtroom. 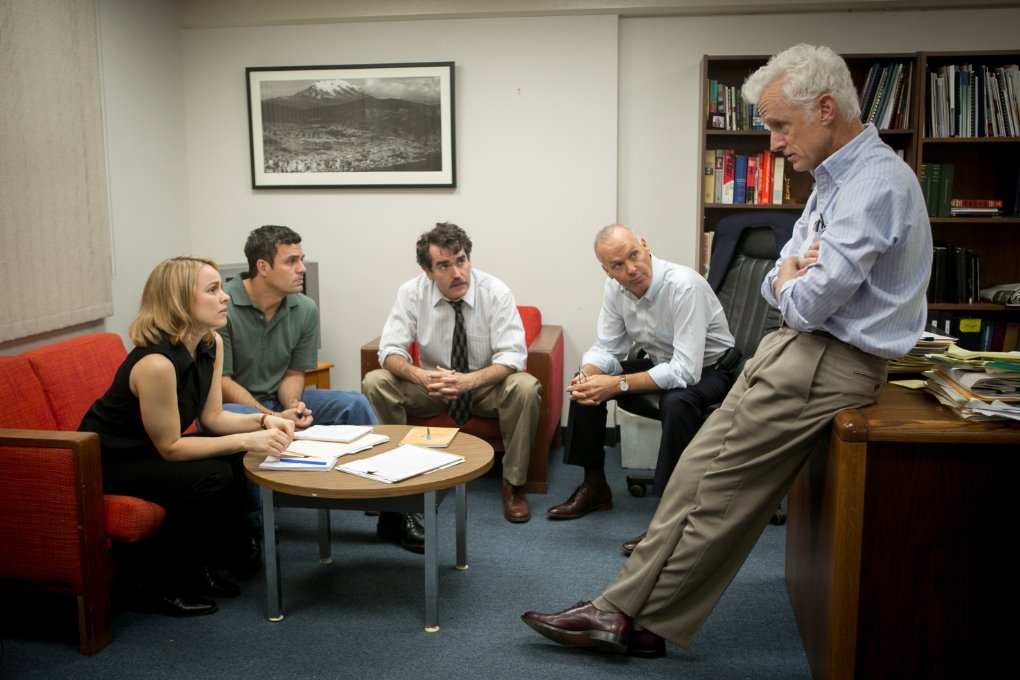 Spotlight doesn’t attempt to replace the countless powerful documentaries that exist about the Roman Catholic Sex Abuse Scandal and its scope is limited to the investigation of what happened in Boston. The film’s strength comes in part from its tight focus - it doesn’t attempt to do too much or to broaden the subject too far. And it gets great mileage in some cases out of small moments and short scenes. One brief interview, in which Pfeiffer questions an accused priest, recalls the powerful 2006 documentary, Deliver Us from Evil.

If there was a Best Ensemble acting category, the cast of Spotlight would be a frontrunner. The film has no lead actor but there are five or six strong supporting performances. Former nominees Mark Ruffalo and Michael Keaton both give forceful, compelling portrayals that, by the accounts of the men they’re playing, are eerily on-target. Rachel McAdams and Liev Schreiber are effectively low-key. Throw in John Slattery (as the deputy managing editor), Brian d’Arcy James, and Stanley Tucci (as victims’ lawyer Mitchell Garabedian) and there’s not a weak link to be found.

Director Tom McCarthy’s approach makes Spotlight remarkable. He doesn’t milk a volatile situation for melodrama. That would have been easy enough to do with so many heartwrenching stories available. The trick here is to chronicle the journalists’ investigation without minimizing the importance of the crimes they’re probing. Spotlight succeeds in presenting the tragedy respectfully while not losing itself in the turmoil.

When it comes to the characters, we know very little about them outside of work. The glimpses we’re afforded of their personal lives aren’t sufficient to build a full portrait but that doesn’t matter. They are consummate professionals - passionate and dedicated. Spotlight is about how that professionalism becomes the fuel to break through barriers and push aside preconceptions to strike at a seemingly impervious institution. In Biblical terms, it’s David vs. Goliath. Without the Spotlight team, would all of this have come to light? And without this brand of journalism, how many future injustices might proceed undetected, protected by the shadows in which they occur?