Motion picture coming-of-age stories are touchstones. The best are capable of transporting older viewers back to a time of life that many of us now view through rose-colored glasses. High school was never easy and that constant hasn’t changed. Those four mid-teenage years represent a cauldron of raging hormones, exploding insecurity, and academic pressure. It’s a wonder that anyone survives them. The Edge of Seventeen reminds viewers of the good, the bad, and the ugly. With a smart, perceptive script from first-time director Kelly Fremon Craig and an arresting lead performance by Hailee Steinfeld, the film rises to the top of a crowded genre.

In high school, everyone (even the popular kids) feels like an outsider, but Nadine (Hailee Steinfeld) has earned the label. Over the course of the movie, which tracks a period during her junior year, she learns that the path of survival has less to do with doing homework, losing her virginity, or making friends than it does with becoming comfortable in her own skin. Unsurprisingly, when she embraces that conclusion, the dark mirror lightens up. 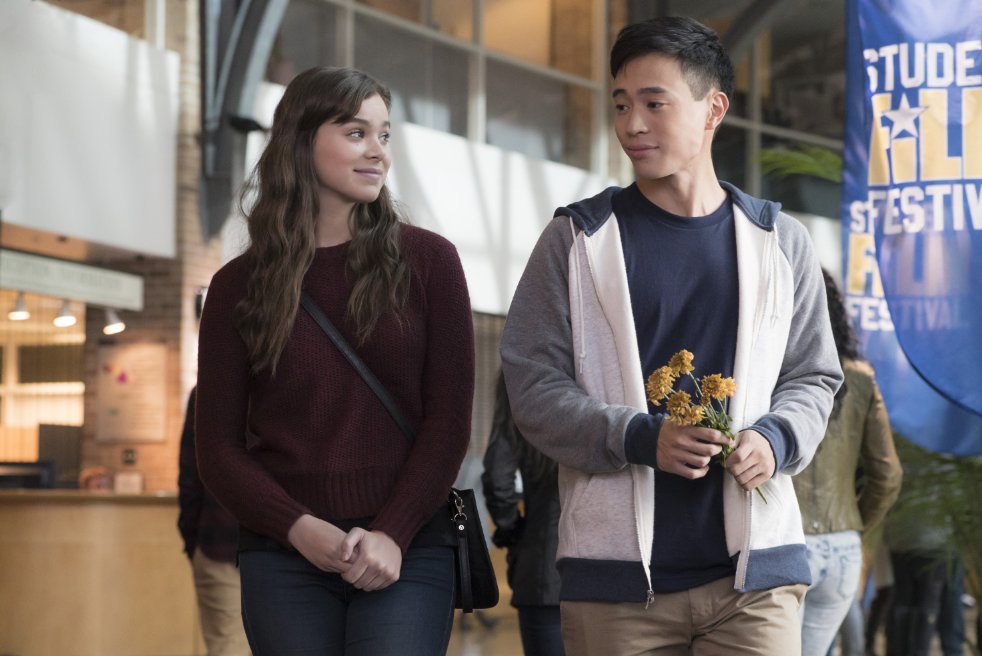 Nadine is afflicted with one of the most catastrophic ailments any nerd-leaning child can have: a popular sibling. Her sports-star older brother, Darian (Blake Jenner), is beloved by the entire student body. Nadine and Darian have a fractious relationship that isn’t helped by her mother’s obvious preference for her male child. Despite feeling isolated since the death of her father, Nadine has found solace in the friendship of Krista (Haley Lu Richardson), the sister-figure she never had. Krista isn’t just her best friend, however, she’s her only friend. When a series of unfortunate events results in Krista and Darian hooking up, Nadine’s world implodes. 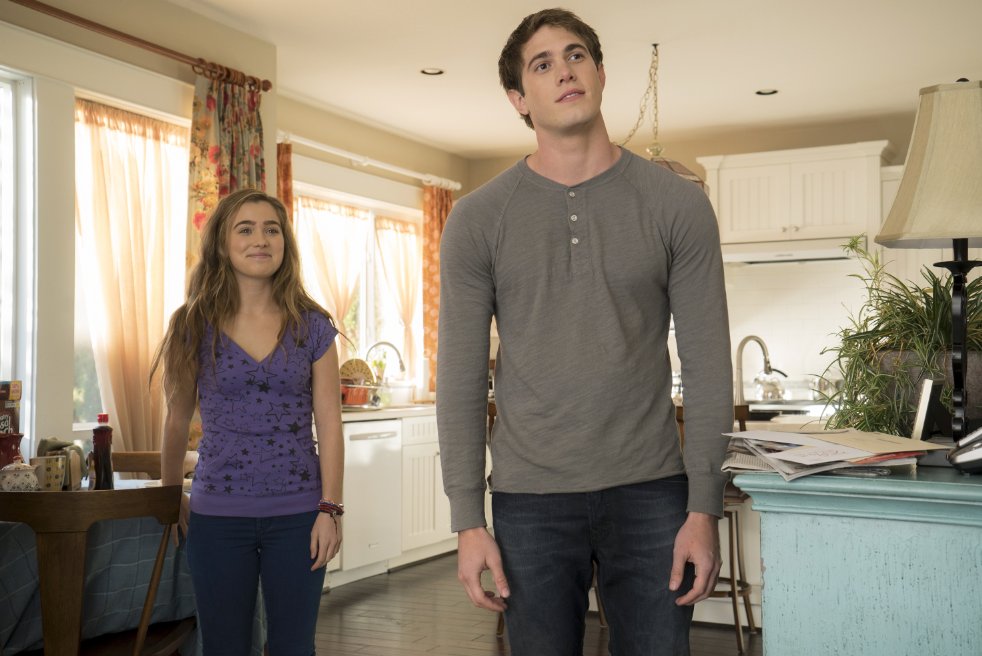 With the élan of a profane John Hughes, Craig effortlessly captures Nadine’s mindset. Viewed from a neutral perspective, she might come across as weird, petty, and self-absorbed but Edge of Seventeen makes her sympathetic. It helps that’s she’s witty (in a Juno sort of way). There are times when the screenplay veers into comedy. The scene in which Nadine tells her teacher (Woody Harrelson) that she’s going to kill herself is amusing as intended. We don’t believe her even though, on some level, she may think she’s semi-serious. For teenagers, every day is a new drama and Nadine has just raised the curtain on Act III.

Hailee Steinfeld brings forth a Nadine whose peculiar charisma is impossible to escape. She’s the outsider we all would like to be: introverted and shy yet tough and independent. She wears her cynicism like a badge of honor. Steinfeld is perfectly cast. Since breaking on the scene at the age of 13 with an Oscar nomination for her part in True Grit, Steinfeld has been on everyone’s to-watch list. This is another example of the actress fulfilling her potential.  She is ably supported by Haley Lu Richardson as her best friend-turned-brother’s girlfriend, Blake Jenner as the universally adored Darian, Kyra Sedgwick as Nadine’s mostly-absent mother, and Woody Harrelson as the teacher we all wish we’d had in high school. 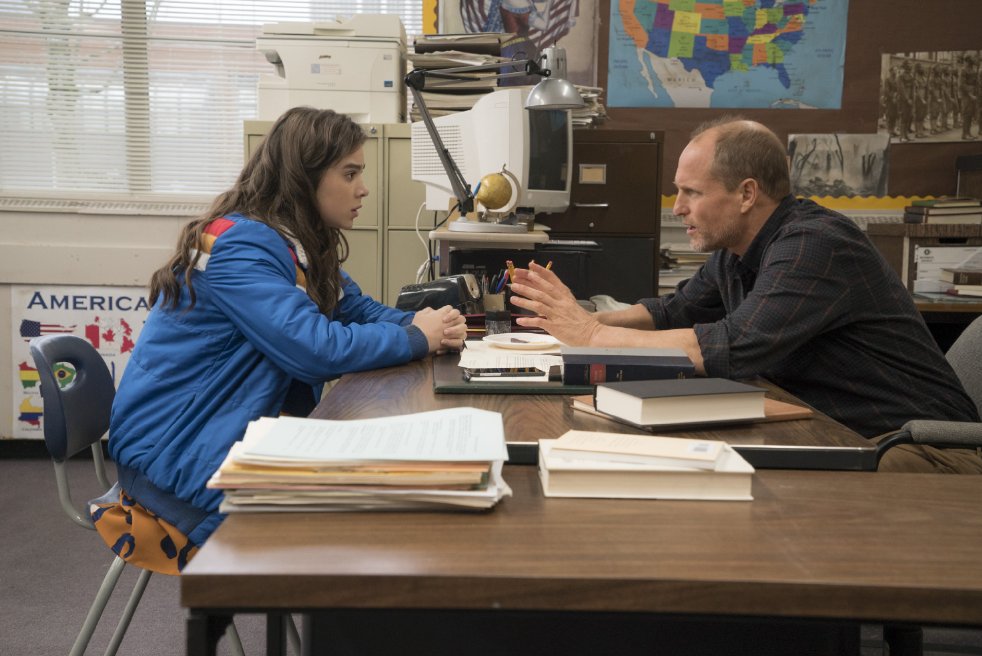 This isn’t a romance (although there are romantic aspects); it’s a coming-of-age drama. The screenplay cannily presents the narrative through Nadine’s perspective and, as circumstances force her to grow and change, we see things more clearly: betrayals that aren’t really betrayals, “perfect” lives that aren’t quite so perfect, and people hurt by her actions who don’t deserve the pain. All of this is largely transparent and that’s what makes the film so strong. We’re getting a lot more than we initially suspect. It makes the characters and the circumstances seem real. It wouldn’t surprise me to learn that there’s an autobiographical aspect. The details are too carefully realized and the emotional balance so perfect for there not to be a personal investment by the writer/director.

Tone is as important as story for a movie like The Edge of Seventeen. The film wants to be likeable and entertaining. It wants to make us laugh at times and feel deeply at others. It needs to mirror the wave-like peaks and troughs of teenage life, when one day can seem like the best day of one’s life until, an hour later, it’s the worst. For a veteran filmmaker, navigating the tricky waters of Nadine’s world might have proven a challenge but, despite not having a previous feature under her belt, Craig accomplishes it and, in the process, brings us one of the best movies of this genre in recent memory.