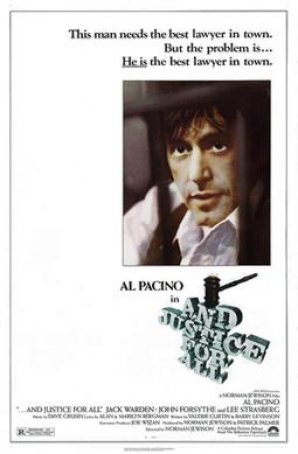 Perhaps Robert Frost put it best when he said, "A jury consists of twelve persons chosen to decide who has the better lawyer." Once, practicing law was considered a worthy, honorable career. No longer. In a bloated legal system where technicalities count more than justice, and where wealth and fame can buy freedom, lawyers have become the parasites who feed off the desiccated remains of human suffering. To be sure, there are some who still enter the profession with the best of motives, but they are in the minority. Law is not about idealism; it's about money and back-room deals.

As common as lawyer-bashing has become, the most vicious cinematic attack on the profession occurred in 1979, when director Norman Jewison, writer Barry Levinson, and actor Al Pacino combined their talents to rake law and order across the coals in ...And Justice for All. Strictly speaking, the film is neither a satire nor a black comedy, but there are heavy shadings of each woven into the narrative. ...And Justice for All's bleak, absurd look at lawyers would be hilarious if it wasn't so true-to-life.

Since the dawn of the talkie, there have been countless courtroom dramas, most of which have tended towards the sensationalistic side of mediocre. ...And Justice for All is not one of those movies. Although some of the action takes place in court, including one of the best-known trial sequences in the history of film (Pacino screaming, "You're out of order! This whole trial is out of order!"), the movie is more about morality and ethics than courtroom shenanigans. ...And Justice for All has no part in the stock trade of shock witnesses and surprising revelations. This is about how too many guilty people walk while the innocent take their places in overcrowded jails. 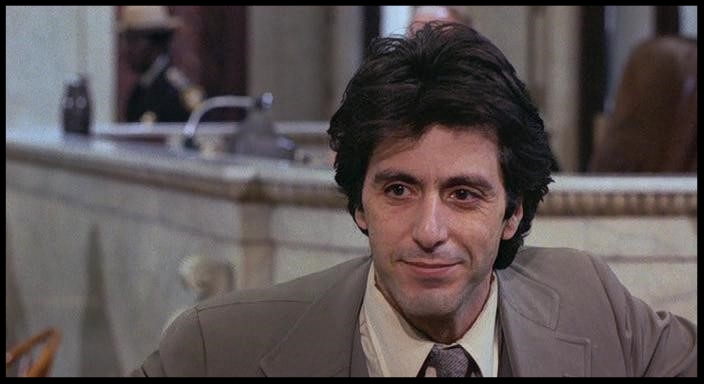 The more you consider ...And Justice for All's message and the means by which it is delivered, the more aware you become of how uncompromising Jewison's attack is on the legal system. Insane and corrupt judges dole out life-and-death sentences with as much thought as a butcher would give to carving a side of beef. Attorneys view the courtroom as an arena where they can grapple with an opponent without concern for the cost in human pain and tears. And those who genuinely care about their clients are foiled at every turn by the deeply-rooted hypocrisy and cynicism that defines American law.

Pacino plays Arthur Kirkland, a defense attorney who has been in practice for twelve years. He has a good reputation, so his caseload is heavy. However, Kirkland isn't in the game for money, prestige, or power. He's one of those rare lawyers who believes in the judicial system and wants to help people. He'll spend a night in jail for contempt of court rather than let a judge ignore a crucial piece of evidence. Yet all of Kirkland's principles are about to be called into question when he is asked to defend a hard-line justice, Judge Fleming (John Forsythe), who is accused of rape. Kirkland's dislike of Fleming runs deep, but circumstances force the lawyer to take this case, which he should stay far away from.

Pacino earned an Academy Award nomination for his work in ...And Justice for All. However, of all his Oscar nominations, this is probably the least-deserved. Pacino's intensity is undeniable, but the actor, who always works on the seam between restraint and overacting, crosses the line a few times too often. In a scene where Kirkland learns that a client has hanged himself, Pacino's histrionics strike a false chord. Certainly, there are times when Pacino is excellent, but he is not consistently so. 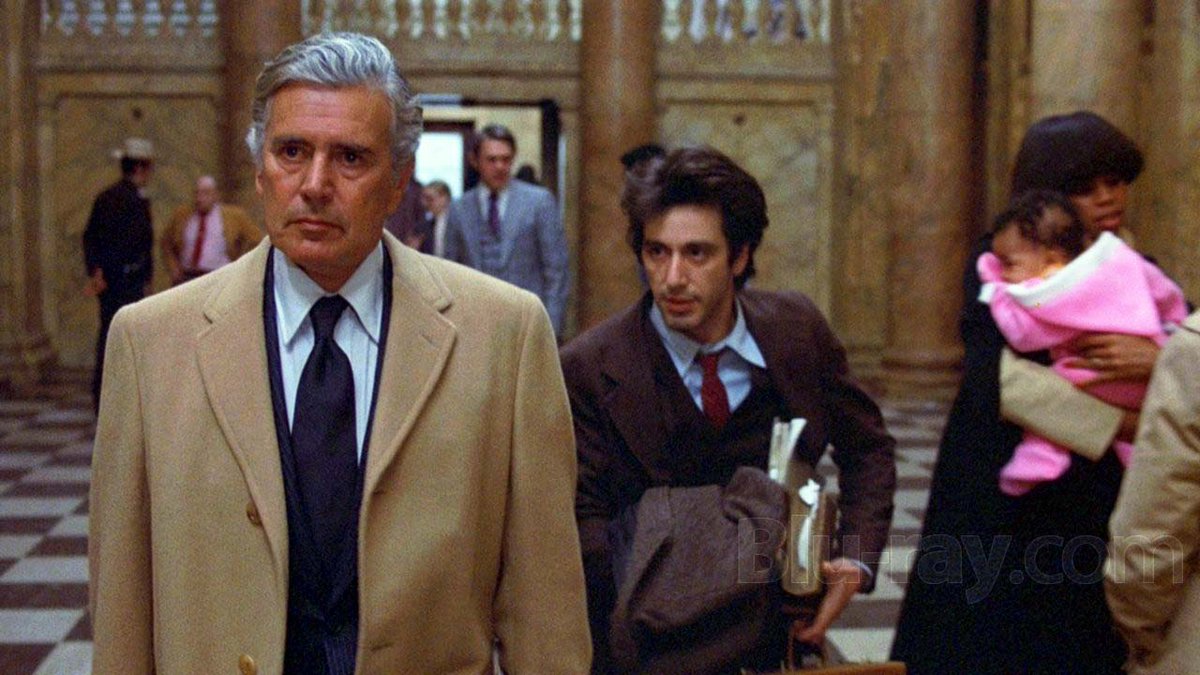 Of the supporting performers, John Forsythe and Jack Warden leave the strongest impressions. Forsythe, known best at the time for being the faceless Charlie of Charlie's Angels, is the perfect picture of cold, controlled arrogance. There's nothing vaguely human about him except his capacity for vice. Whether guilty or innocent of rape, he's still a villain. Warden plays a suicidal, borderline-lunatic judge whose continued presence on the bench makes a mockery of every trial he presides over. Jeffrey Tambor is a lawyer who undergoes a crisis of conscience when a man whose acquittal he facilitated commits a double murder. Christine Lahti is Kirkland's girlfriend, Lee Strasberg is his grandfather, and Craig T. Nelson is a prosecuting attorney.

...And Justice for All ends with the kind of bravura outburst by Pacino that one might easily assume is designed to entice cheers and applause from the audience. But there's a subtle difference between this finale and the cornball conclusion of a later Pacino picture, Scent of a Woman, which also featured a dynamic speech. Here, the actor's words radiate real outrage, and what he says caps the film's central ethical dilemma about a lawyer defending a man he knows to be guilty. This is a powerful, cathartic moment that's neither exhilarating nor uplifting. Like most of what precedes it, the climax of ...And Justice for All underscores Jewison's message about how hollow and diseased the process of law has become. We need look no further than the O.J. Simpson trial to understand everything this film is trying to say.