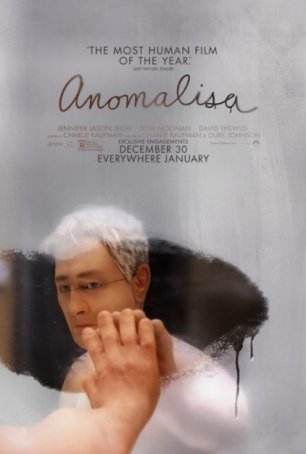 Anomalisa offers evidence that animated films are not necessarily the sole province of children. In fact, this one isn’t even designed for all adults. Charlie Kaufman has always been something of an acquired taste. Anomalisa highlights Kaufman at his best and worst. About 30 minutes of this movie is brilliant - a near perfect illustration of what it means to fall in (and out of) love. Unfortunately, the film’s other two-thirds is less impressive - at times unremarkable, at times weird, and at times tedious. At worst, it can be said that Kaufman has made a discussion-worthy animated feature.

The film begins with a seemingly commonplace set of circumstances presented almost in real time. The only unconventional aspect of this 30-minute sequence is that it’s presented using stop-motion animation rather than live actors. Motivational speaker Michael Stone (David Thewlis) has arrived in Cincinnati for an engagement. After landing at the airport, he hails a taxi, takes the short ride to his luxury hotel (no smoking - the cab driver is asthmatic), checks in, goes to his room, tips the bellboy, orders room service, and makes a couple of phone calls - one to his wife and one to an old flame who lives in the city. The ordinariness of these activities, although grounding the story, makes Anomalisa difficult to get into. For most of the first half-hour, I was more interested in the craft of the film than the narrative. A few things immediately become apparent. Other than Michael, the men and women populating Cincinnati look similar. Also, regardless of sex, they all sound remarkably like Tom Noonan.

Anomalisa is closing in on the halfway point before it strikes pay dirt. That’s when Michael encounters Lisa (Jennifer Jason Leigh), a woman who, despite having no obvious outstanding characteristics, is different in every way from everyone else. She doesn’t sound like Tom Noonan. Her features aren’t those of a clone. She jolts Michael out of his funk and he immediately becomes obsessed with her. He contrives to get her alone in his room and they have a heart-to-heart discussion followed by a sexual encounter that’s more real than anything one usually encounters in live action dramas. But, as often isn’t the case in motion pictures, there’s a morning after…

At its heart, Anomalisa explores the mystery of attraction and the bane of overfamiliarity. Michael is addicted to the “honeymoon” phase of a relationship - when everything is new and exciting. He falls for Lisa because there’s something about her that’s different. The movie depicts it literally - by giving her a unique form and voice - but it’s more about psychology and chemistry. The night they spend together is magical. But, by morning, the newness has faded. Again, this is depicted literally. Lisa begins to sound like Tom Noonan. Her features alter ever-so-slightly.

The decision to make Anomalisa as an animated film is an artistic choice. Given advances in special effects, it wouldn’t have taken much effort to do this live action. (The production certainly would have been less time-consuming.) But the lack of real actors lends an odd, Twilight Zone quality to the production that enables us to note little details that might otherwise escape notice. It’s almost unnerving to watch so many ordinary, mundane moments captured in perfect detail by the animators. The first half hour drags but it ultimately serves the purpose of immersing us in this reality.

The animation by co-director Duke Johnson (best known for his involvement in the subversive Adult Swim series Mary Shelley’s Frankenhole) uses stop-motion techniques with marionettes.  The puppets have been designed to look semi-realistic without crossing a line that invites criticisms of creepiness. Production required more than a year of painstaking effort; Johnson is quoted as saying that it took six months to animate the sex scene to avoid making it seem comedic.

Speaking of the sex scene, this may be the most controversial element of Anomalisa. Graphic enough to be called pornographic by some viewers, the sequence is an honest representation of how a sexual encounter might transpire in these circumstances. It seeks to be true-to-life both physically and emotionally. Had exactly the same scene been presented using live actors, there’s no question the movie would have been saddled with an NC-17 rating.

Anomalisa began life as a radio play; Kaufman wrote it in 2005 (it remains set in that era). Initial film plans were to make a 40-minute short. In retrospect, that might have been a better approach. Significant chunks of Anomalisa feel like filler - not only the protracted beginning but a weird dream sequence and an on-stage breakdown. The film’s core is strong and compelling - Kaufman at his most artistically vibrant. But the commercially influenced decision to stretch out the film to feature length does Anomalisa no favors.