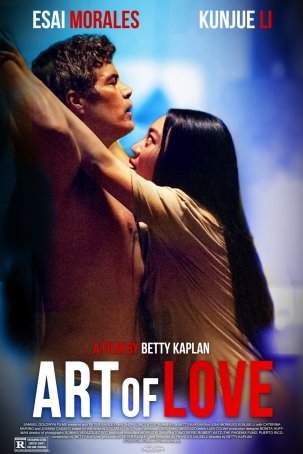 Art of Love, which started life with the title Simone, starts out as something different from how it finishes. It’s a tale of two halves. The first 45 minutes represent a whimsical journey of love as a shy young woman plays a cat-and-mouse game to capture the attention of an older author to whom she is attracted. The film’s remainder, with an increasingly dour tone and a frustrating ending, is considerably less satisfying.

The movie is presented from the perspective of a nameless writer (Esai Morales) who lectures at a prestigious Puerto Rican university while writing on the side. The Writer’s thoughts form the framework of a verbose voiceover narration that clutters the soundtrack with unnecessarily wordy ruminations. Trapped in a cocoon of loneliness and finding his day-to-day routines empty and unsatisfying, the Writer becomes excited when he learns that he is being watched. Soon, his admirer makes contact and the two engage in a flirtatious game in which he attempts to discern her identity while she remains elusive. Eventually, they meet. She – a Chinese immigrant named Li Chao (Kunjue Li) – isn’t at all what he expects but that doesn’t stop him from falling in love.

One impediment, however, is that Li Chao is a lesbian. The Writer is the first man she has ever felt anything for and, although she is willing to engage in some level of physicality with him, she won’t engage in intercourse. This is frustrating for him. The bigger issue is that her past harbors dark secrets that have poisoned her ability to have a “normal” relationship. As those details emerge, the Writer comes to the realization that his feelings (as well as any she may reciprocate) may not be enough. 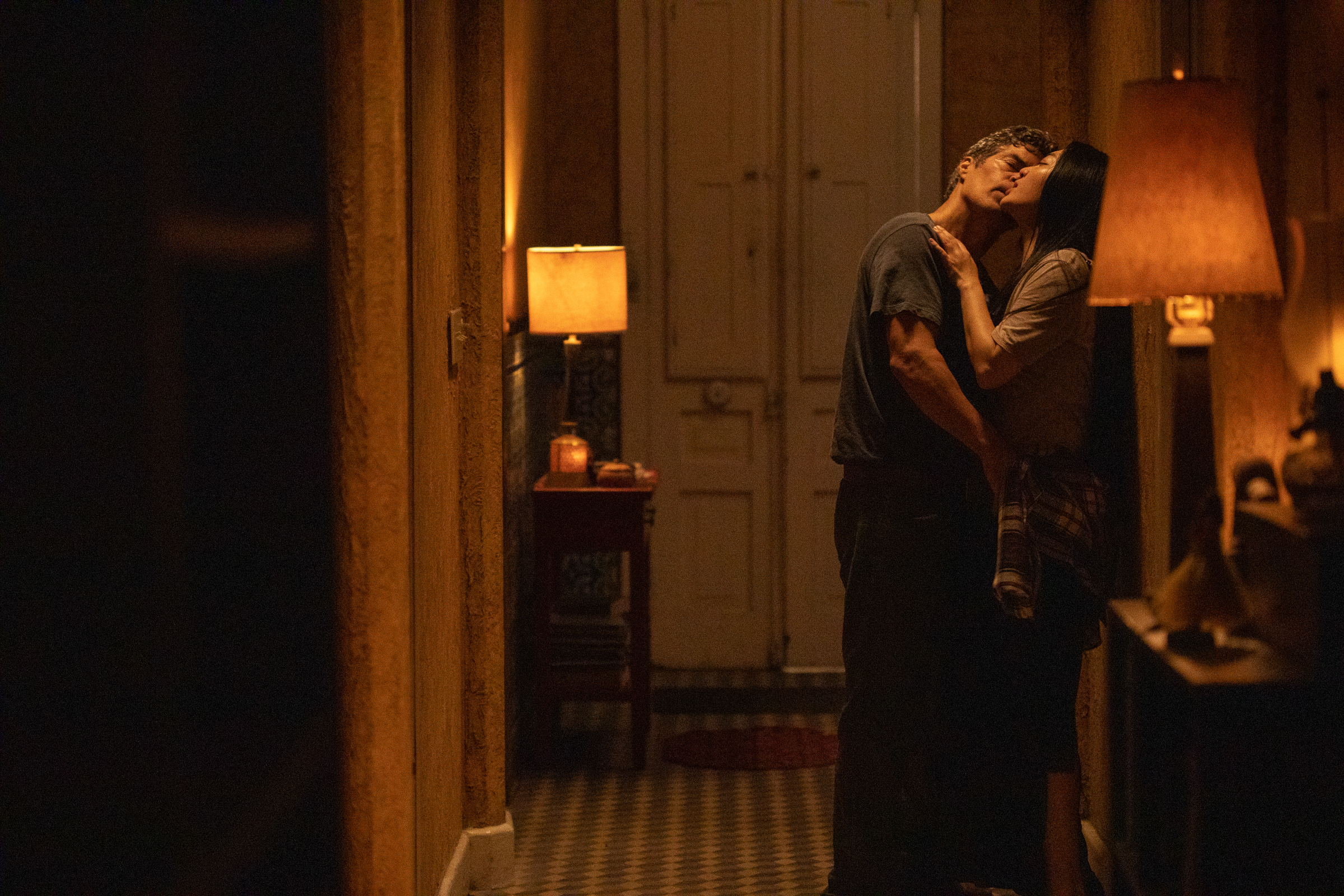 The screenplay, which was written by director Betty Kaplan, attempts to recapture the elusive, literary quality of the source novel. The use of the voiceover narration is a mistake, however. Not only does it fail to add much to the overall story, merely emphasizing the Writer’s intelligence and isolation, but the passages are also so elitist that they create a barrier to sympathizing with the character. He comes across as something of a self-centered prig so when he “suffers,” his “agony” has a karmic feel to it. Li is a far more interesting character but she is presented through the lens of his point-of-view so we’re not so much seeing the “real her” as we are seeing his version of her.

The first act is fun and flirty. Li is lively during their early encounters and there’s a wonderful scene in which the Writer, after hearing a phone message from his secret admirer, is giddy at the prospect of finally meeting her. The movie’s second act, which follows the couple from first meeting to inevitable break-up, is filled with graphic sex. In presenting as much as she does of the couple’s bedroom activities, Kaplan has elected to show (rather than tell) of the limitations that Li places on what she will (and will not) do. This is a case, however, when showing less might have been better. The choreography of the sex scenes is evident. They feel artificial. They passion comes across as feigned. Rather than being erotic, they are awkward (and not because the very act of sex can be awkward but because it’s obvious that Morales in particular is avoiding crossing boundaries in the ways he navigates his partner’s body).

The film’s final 30 minutes are a chore as the narrative shifts into a fairly generic melodrama about what happens when ugly circumstances abort a love affair that hasn’t yet reached its natural termination. This being an “art film,” we’re not expecting a happily-ever-after. In fact, such a fairy tale ending would be out of sync with the overall tone, but the last scene places an artificial barrier between the two characters and doesn’t allow them to act rationally. It’s perhaps the one time in the entire movie when the Writer’s motivations are opaque. 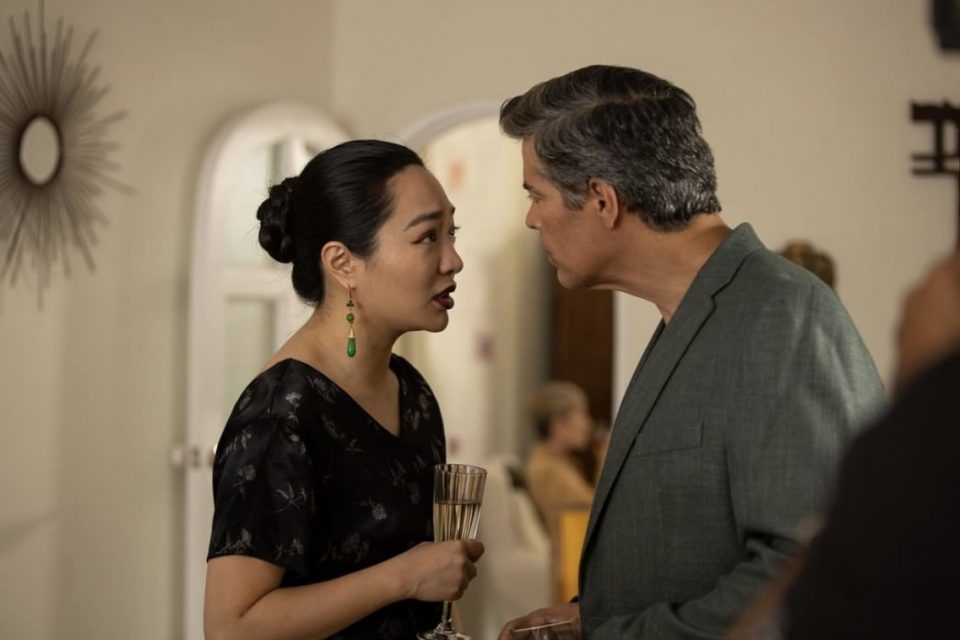 Kaplan applies one artsy device that, whatever her intentions, doesn’t work. She employs computer animation that might have been cutting edge for video game cut-scenes circa 2000 to metaphorically represent the shifting dynamics in the relationship, most often showing avatars of the Writer and Li Chao on a boat in turbulent seas. It’s an unnecessary distraction and, because it’s so obviously retro, it’s impossible to ignore and not feel that an understanding of the reason for its inclusion might unlock some deep secret.

Over the course of his long career, which started with a role in La Bamba and continued with a long line of high-profile TV parts (including “NYPD Blue” and the “Battlestar Galactica” prequel, “Caprica”), Esai Morales has been a solid, reliable actor. Here, however, his performance is uneven, with a tendency to go over-the-top during some of the third-act scenes. His co-star, the far less experienced Kunjue Li, exceeds him in both screen presence and believability. Caterina Murino (best known for playing Solange in Casino Royale) is a welcome addition to the cast, although she makes only a few brief appearances.

Despite some of the issues I had with Art of Love’s second half, the movie never lost my attention and I found some of the secondary issues, such as the “identity crisis” suffered by some in Puerto Rico, to be of interest. But the film doesn’t achieve its goal of making this commonplace love affair into an epic romance. Whether it’s the screenplay, the direction, or the acting, Art of Love never ascends to the level that would make it more of an experience than a way to pass a couple of hours.