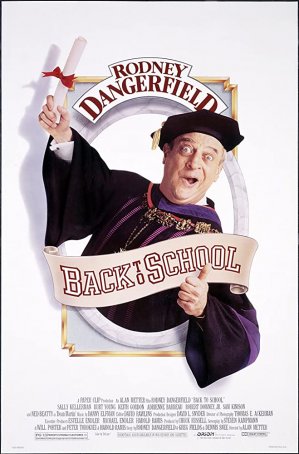 For Rodney Dangerfield, the stand-up comedian whose catchphrase was “I don’t get no respect,” Back to School provided an opportunity to get more than his share of praise and adulation. The crowd-pleasing comedy grossed $91M, making it the sixth-highest earner of 1986 and by far the biggest money-maker of Dangerfield’s career. (None of his other films made as much as half of that.) The movie is pure Dangerfield – a thinly-sketched narrative providing a clothesline onto which the comedian could pin a long string of gags and one-liners.

Story-wise, Back to School feels like what it is: a product of the ‘80s. Most comedies of that era adhered to a belief that elements of pathos would somehow elevate the proceedings. The movie finds its groove when Dangerfield is improvising and sharing the kind of humor that made him a household name (via appearances on The Tonight Show, where he was a regular during the 1970s and 1980s) but it enters cringeworthy territory when trying to show that it has a “heart” in addition to a funny bone. Although it’s possible for a movie to have both, doing so requires a level of sophistication never achieved by Back to School. Director Alan Metter (Girls Just Want to Have Fun, Police Academy: Mission to Moscow) isn’t on the level of a Cameron Crowe or Judd Apatow (as examples). 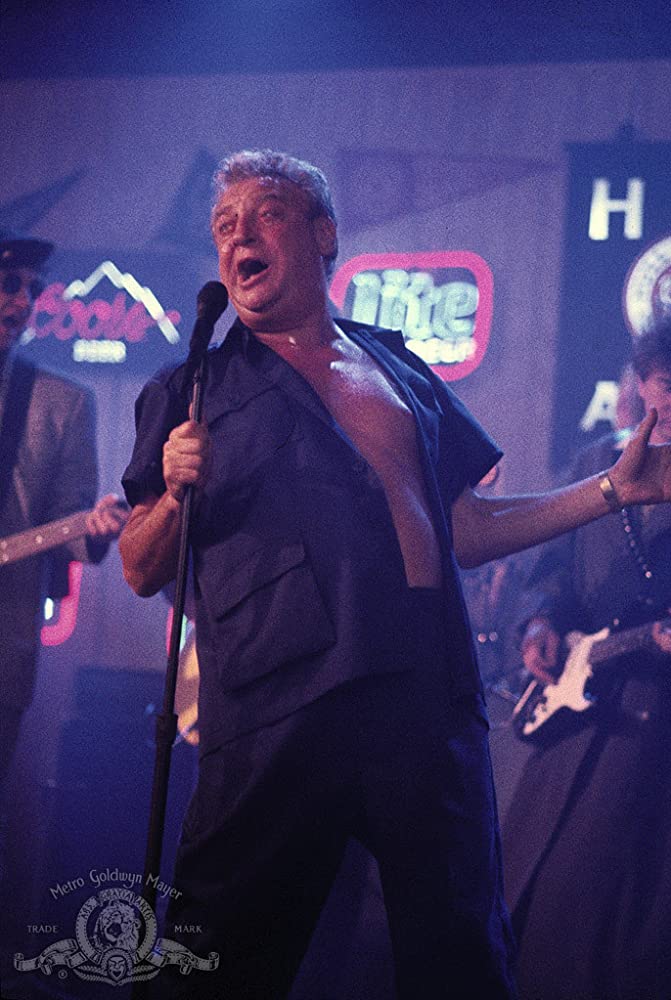 Thornton Melon (Rodney Dangerfield) has grown rich through the ownership and operation of a chain of “Tall and Fat” clothing stores despite never having had a college education. When his marriage to his second wife Vanessa (Adrienne Barbeau) falls apart, Thornton decides to pay a visit to his son, Jason (Keith Gordon), who has recently begun life as a college undergraduate. As a show of support when Jason confesses a desire to drop out, Thornton enrolls so father and son can experience higher education together. A generous gift to the school allows Dean Martin (Ned Beatty) to bypass the stringent enrollment requirements, giving Thornton a place in the freshman class. This development is met with mixed feelings by Jason and his anti-social best friend, Derek (Robert Downey Jr.).

Thornton’s arrival is greeted with contempt by business professor Philip Barbay (Paxton Whitehead), who despises the means by which his newest student has gained admittance to the college. Others, like English teacher Diane Turner (Sally Kellerman) and diving coach Turnbull (M. Emmet Walsh), are more open to the idea of a sixty-something year-old freshman. Thornton’s attempts to woo Diane fuel Philip’s anger (he’s currently dating her) and make the professor determined to see the newcomer expelled. Meanwhile, Thornton’s appearance on campus helps Jason develop enough self-confidence to talk to his crush, Valerie (Terry Ferrell), and push back against the bullying captain of the diving team, Chas (William Zabka). 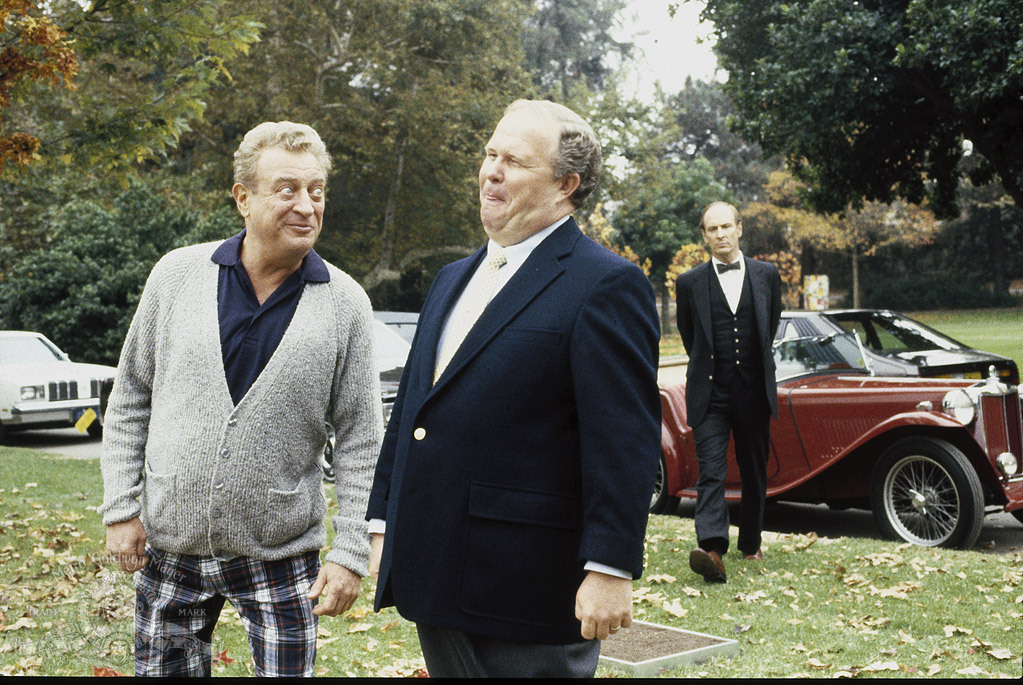 Although Dangerfield never once says, “I don’t get no respect,” he has plenty of other rejoinders that remain amusing (if a little corny) years later. A highlight occurs when Thornton gives a pitch in a TV commercial for his stores. The litany of fat jokes goes something like this: “When you go jogging, do you leave pot-holes? When you make love, do you have to give directions? At the zoo, do the elephants throw YOU peanuts? Do you look at a menu and say 'OK'?” Terribly politically incorrect, to be sure, but funny. This is Dangerfield being Dangerfield – self-deprecating and utterly unconcerned about offending the viewer. Although some of his comedy is off-color, none of it is especially profane. Although not as squeaky clean as Bob Hope, Dangerfield didn’t go as far as George Carlin or Don Rickles. By today’s standards, he would be considered tame.

With Dangerfield sucking up all the oxygen in the room, there isn’t much chance for anyone else to shine, so it’s no surprise that the cast lacks many recognizable names. Sally Kellerman brings a little saucy sex appeal, although most viewers at the time may have still been remembering Hot Lips Houlihan while watching her. Ned Beatty doesn’t have much to do; his appearance as Dean Martin (the name is an in-joke – Dangerfield often appeared on Martin’s TV show) is little more than a cameo. Robert Downey Jr., during the pre-Less Than Zero portion of his career (in other words, before critics started taking him seriously), has a supporting role. 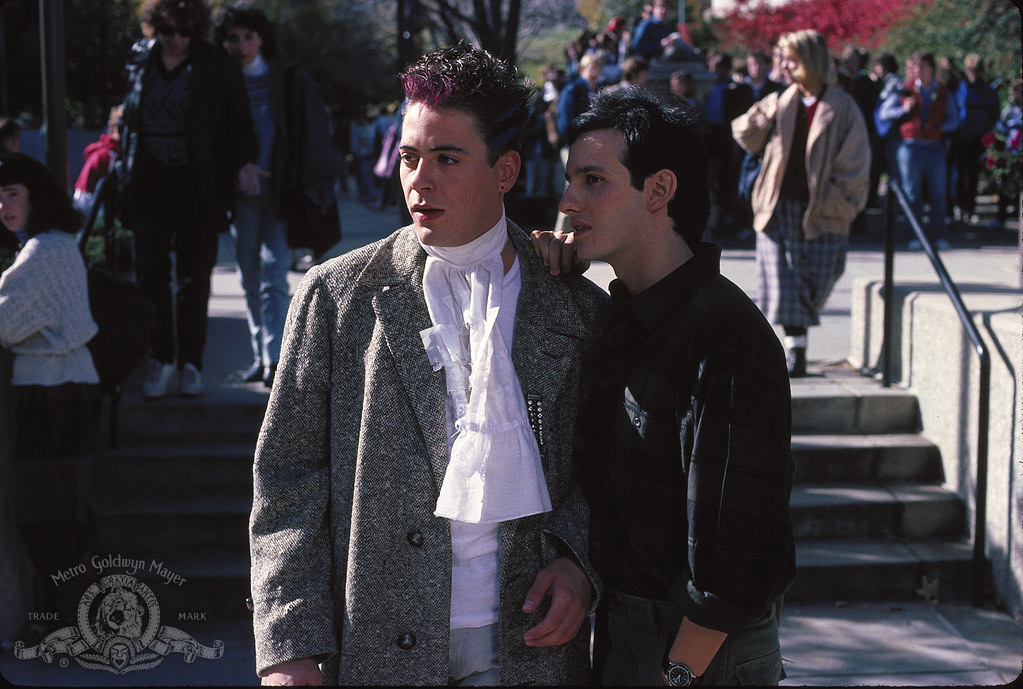 The movie represents a mix of the clever and the sappy. On the one hand, there’s Thornton having an entire staff doing his homework (including Kurt Vonnegut writing a paper on Kurt Vonnegut), renovating his dorm room (into a luxury apartment), and taking notes for him in class. On the other hand, there’s the cheesy happy ending that wraps up everything in too-pleasing fashion. (Ah, but that’s the way it was with almost all ‘80s comedies…) There’s little or no chemistry evident between Dangerfield and Kellerman or Dangerfield and Keith Gordon. The father/son relationship never gels. The two seem like strangers.

It's hard to explain why Back to School achieved the level of popularity it did. Some of it was because of Dangerfield, who was riding the pop culture wave generated by his appearance in a series of Miller Lite Beer commercials. Some was a savvy marketing campaign. And some was positive word of mouth. Although the film is enjoyable in a modern context, it’s not as funny or endearing as it was during its theatrical run, when the topicality of some of the humor hadn’t dissipated and Dangerfield’s brand of humor was greeted as warmly as his offbeat, larger-than-life personality. Back to School is a representative reflection of ‘80s kitsch but, as flavored by Dangerfield’s salty personality, its laughs are thankfully more often intentional than unintentional.