It's probably unfair to blame the failure of Carrie on Steven King. While it's true that the script, written by Lawrence D. Cohen and based on King's novel, is a mishmash of clichés and poorly-realized characters, director Brian De Palma deserves an equal share of the criticism. When he's not showing off his virtuoso techniques behind the camera (he uses a split-screen for no apparent reason), he's botching the opportunity to generate sustained tension. The climax, which could have been a great moment in horror film history, is so badly mishandled that it comes across as borderline-incoherent and not the least bit chilling.

Carrie was the first of King's works to receive a big-screen treatment, and, like far too many that came afterwards, it points out the limitations of the best-selling author's material when adapted to a visual medium. Reading something by King is not like watching a film inspired by the same book - the quality of imagination, which is necessary to the exploration of a novel, is almost entirely absent from the theatrical experience. King's plots have always been banal and derivative (he freely admits this, stating that he writes based on things that scared him when he was a child). That can work on the written page, where the characters and situations have room to breathe. However, in a motion picture script, where everything is reduced to the bare essentials, it becomes a significant drawback. Such is the case with Carrie. 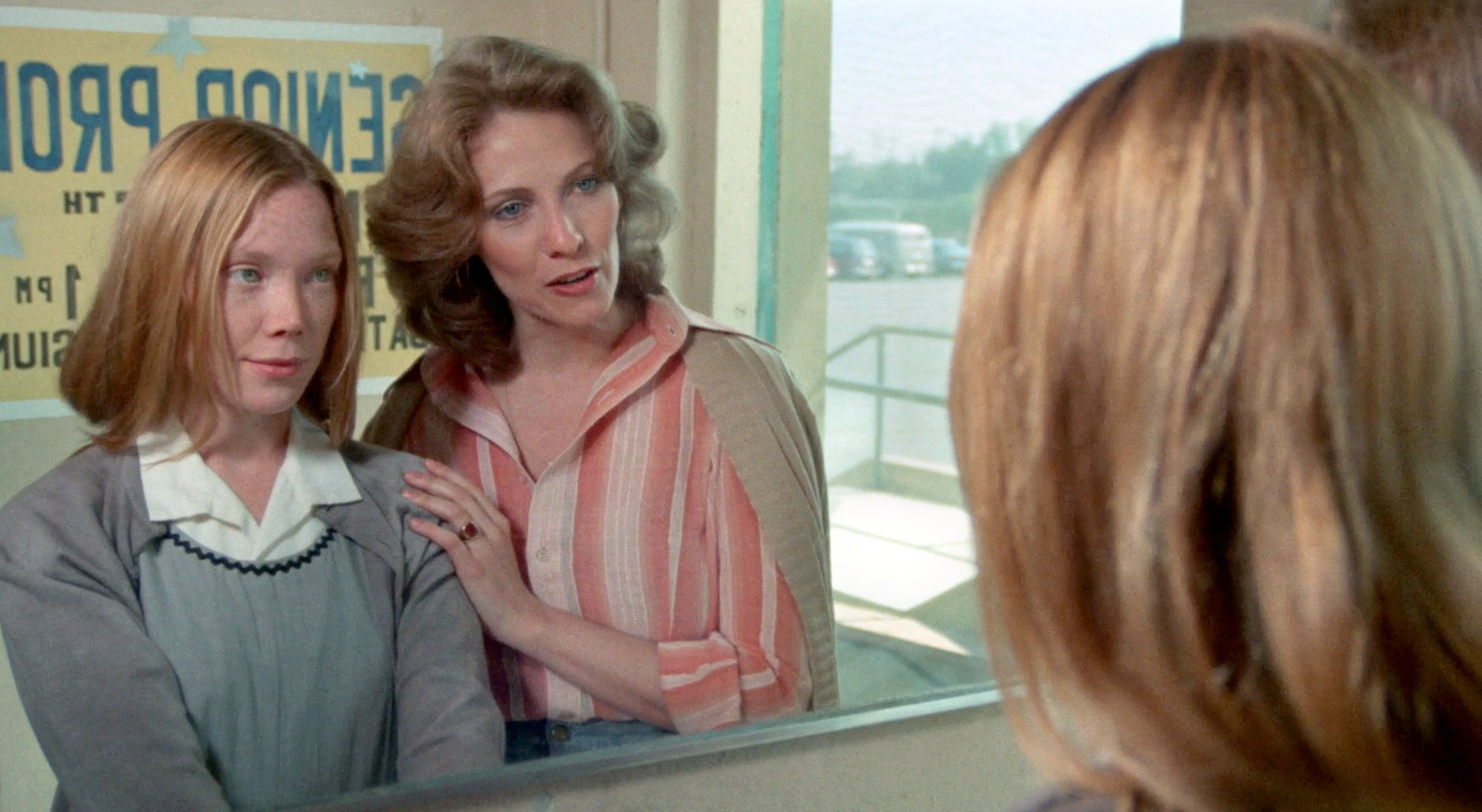 The title character, Carrie White (Sissy Spacek), is a social pariah. Ostracized by her high school classmates, she keeps to herself, rarely exchanging a word with anyone. When she experiences her first period while taking a shower after gym class, she becomes the object of open derision. The teacher, Miss Collins (Betty Buckley), takes pity on Carrie and instructs her about what she needs to know about the facts of life. The reason Carrie hasn't learned any of this important information at home is because her mother, Margaret (Piper Laurie, in an embarrassingly over-the-top performance), is a religious fanatic, and believes that anything to do with sex and reproduction is sinful. When she learns that her daughter has "become a woman," she forces the poor girl to join her in period of frenzied prayer.

The Senior Prom is coming up, and, for many girls in the graduating class, it's the highlight of the year. However, because of her part in Carrie's shower humiliation and her subsequent refusal to graciously accept a detention, one of the prettiest girls in school, Chris Hargenson (Nancy Allen), has been banned from the dance. Determined to exact revenge on Carrie, she enlists the aid of her boyfriend, Billy Nolan (a pre-superstar John Travolta), to prepare a cruel trick on the unsuspecting girl. Meanwhile, another classmate, Sue Snell (Amy Irving), regrets her part in the post-gym debacle and, to make amends, she convinces her boyfriend, Tommy Ross (William Katt), to ask Carrie to the prom.

The horror aspect of Carrie is carefully veiled, making much of the movie seem like a badly-written, B-movie version of a John Hughes film. The dialogue in particular is lackluster and the expressions of teen angst are overwrought. Eventually, however, there is the expected blood bath (both literally and figuratively), with Carrie letting loose her unchecked fury at the prom. It seems that she isn't just different from her fellow high schoolers when it comes to personality. Carrie possesses a strong telekinetic ability, and, although she can't fully control it, forceful emotions allow her to channel her power. 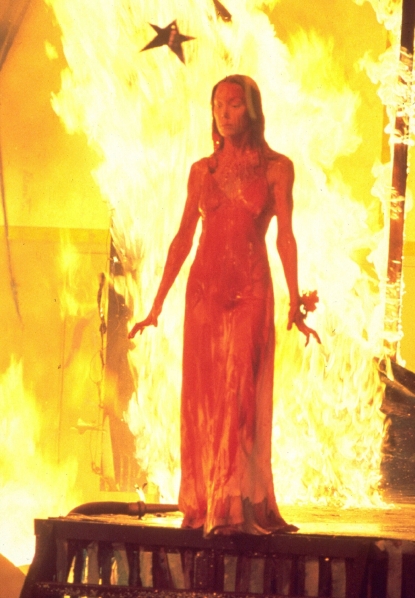 Perhaps the most disappointing aspect of Carrie is that there's potential in the premise; it's just never realized. The film's first failing is in characterization. Apart from Carrie, everyone is a caricature – the religious fanatic, the bitchy pretty girl, the sex-obsessed dolt, and the caring teacher. Then there are two characters, Tommy and Sue, whose murky motives are without rhyme or reason. In contrast, Carrie is developed in such a way that we sympathize with her. While not three-dimensional, she at least shows more distinctiveness than the gallery of flat individuals surrounding her. Much of the credit for this goes to actress Sissy Spacek, who gives by far the best performance of the film (and one that is better than the material deserves). In fact, there are several scenes that Spacek's work singlehandedly salvages.

Two hallmarks of any good revenge flick are the build-up to the climactic act and the pleasure of seeing the antagonists get their just desserts. Neither of these qualities is evident in Carrie. There is little suspense or dramatic tension; everything plays out like bad melodrama or cheap exploitation. And, when the moment of vengeance comes, it happens so quickly and results in so many deaths that we're not given the opportunity to savor the ones that really matter. Close your eyes for a moment and you'll miss the too-brief sequence where Chris and Billy get their deserved comeuppances. The incoherent ending is another problem – perhaps it would have made sense if Sue was more than a background ornament used in service of a plot device.

It strikes me as a little bizarre that Carrie is regarded in some quarters as a classic of the genre. Psycho is a classic. Halloween (made two years later on a lower budget) is a classic. One could even make a case that A Nightmare on Elm Street is a classic. Carrie is just a bad movie, with only Spacek's performance making significant portions of it watchable. And the film has not improved with age. It looks just as cheap, cheesy, and ineptly made today as it did when it was first released. (Sadly, a 2013 remake didn’t substantially improve upon this one.)